My first impression of Ryde. How's the app, the booking interface and the promos?

[Ok, I’ve finally taken my first Ryde ride today. Scroll to the bottom for my thoughts]

With Uber’s untimely demise and departure from the Singapore market, Grab holds an unhealthy amount of market power. Fortunately, this should only be temporary as Go-Jek is poised to enter the market (some of my friends who worked at Uber have been reached out to by Go-Jek recruiters) and local upstart Ryde looks to expand its operations here. 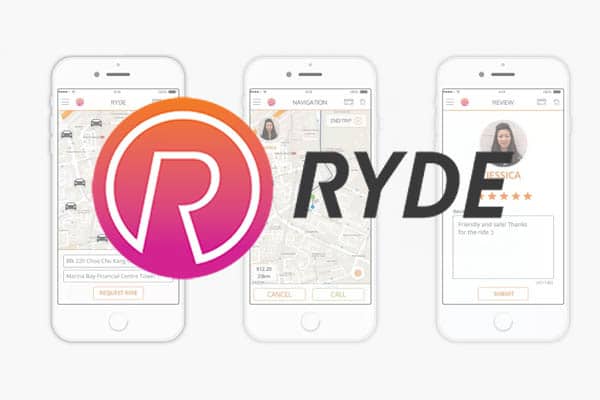 I used Ryde for the first time today. Or rather, I tried to use Ryde, but for the life of me couldn’t get a match. I can only assume that it’s going to be like this for the first couple of months or so, as Ryde claims to have 5,000 drivers now but wants to triple that figure in the months to come. In any case, just downloading and tinkering with the app was an opportunity to see how Ryde is and isn’t like Uber and Grab.

The Ryde app is available for Android and iPhones. If it’s your first time using Ryde, download it through this link and get $2 of RydePay credit (yeah, it’s a far cry from the days of Uber).

What options does Ryde offer?

Ryde currently offers 5 options, with a further UberXL-esque RydeXL launching on May 24. The app also sells travel and car insurance, which is, well, somewhat unexpected, and also has a “Play” section where you can play a series of games to win RydePay credits. 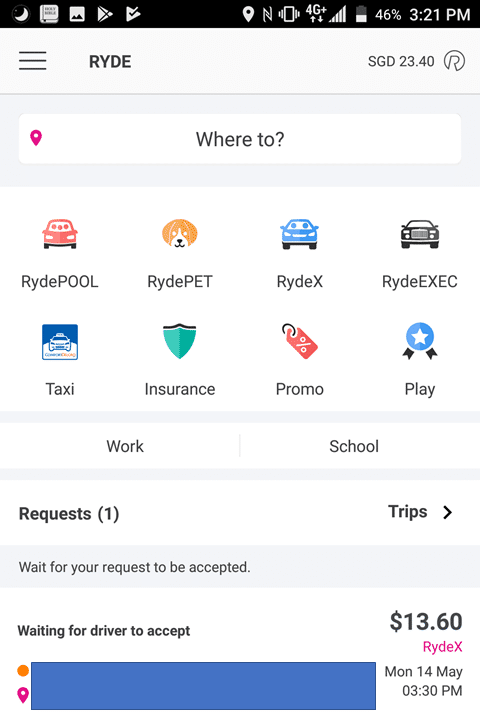 RydePOOL is an interesting one- it’s the equivalent of GrabHitch but with one key difference. There are two sub-flavors of RydePOOL- Per Pax, and Per Trip. 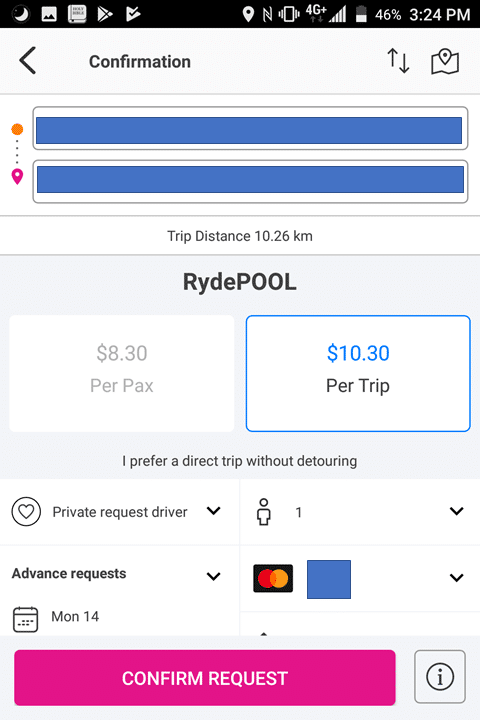 Here’s how Ryde explains the differences between the two: 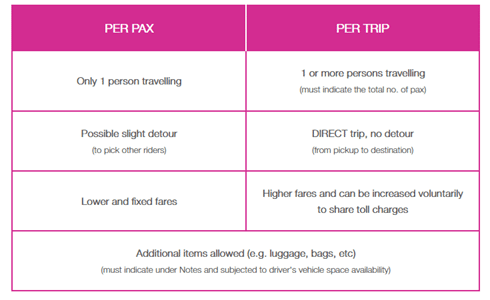 In case that’s not clear enough, Per Pax is the absolute cheapest option, but it’s only for a maximum of one traveler and you may face detours to pick up other riders. Per Trip is more expensive, but you’ll be sent directly to your destination in shared vehicle. Here’s an example:

So Passenger A and C can occupy the same vehicle at the same time, but C’s destination supersedes A’s.

Ryde is not on demand…yet

RydeX is the equivalent of UberX or GrabCar, or so I thought until I tried to make a booking.  I wanted to take a trip from the CBD to Bukit Timah. I tried RydeX, and got a quote of $13.80, which is reasonable-ish, all things considered. Do note that the fare that RydeX quotes is the “minimum” price, and you’re asked to adjust your price upwards to increase your chances of a match. In other words, this is “ownself surge ownself.” This doesn’t mean that Ryde doesn’t have surge pricing either- it does. In a time of surge the base price will go up, but you can further “ownself surge ownself” if you felt so inclined.

Don’t expect cheaper trips if you’re only going a short distance either, because the minimum fare is $8 and it’s a further 60 cents per KM. 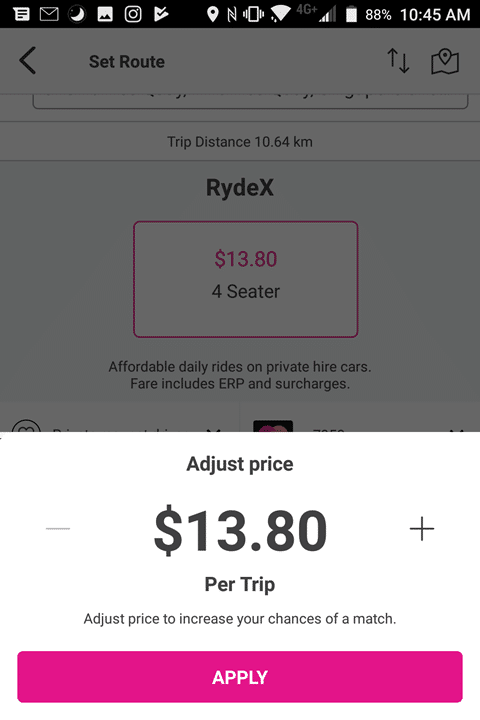 Moreover,  RydeX currently requires advance bookings and is not on-demand. You book a ride between 10 minutes and seven days in advance, and you wait on average 20 minutes to be matched to a driver. My match never came, but I was only willing to wait about 5-10 minutes anyway. Suffice to say, if you need a ride right this minute, Ryde is not the app for you. What amused me was that while waiting, a notification on the app popped up saying “You might want to take a taxi instead”. I know that Ryde lets you book taxis, but still… 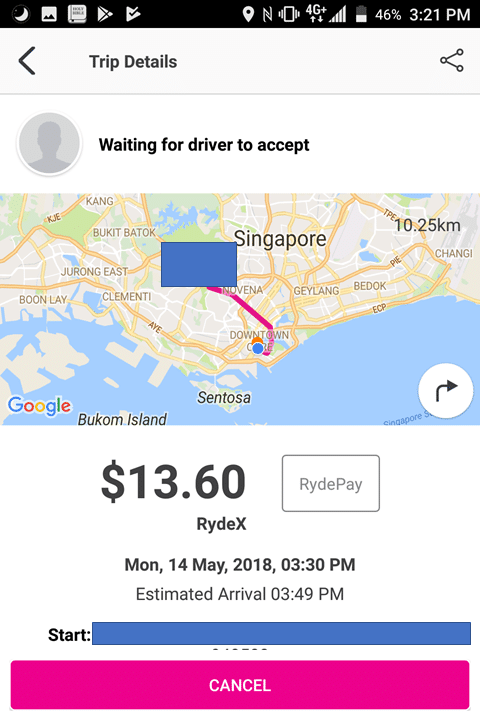 If you have referral credit, one important thing to note is that the payment system does not let you net that credit off from what you pay with your card. In other words, if you have a $10 fare and $2 credit, you can’t use your card to pay $8 and have credit cover the rest. Instead, you need to top up your RydePay credit balance to meet your total fare quote. The minimum top up amount is $35, which means I now had a $35 + $2= $37 balance. It’s obvious that the intention of the mechanism is to lock you into the platform for future trips, which I guess makes sense from Ryde’s point of view. I used my DBS WWMC to pay for this, and I’ll report back if it earns 10X (I see no reason why it should not). 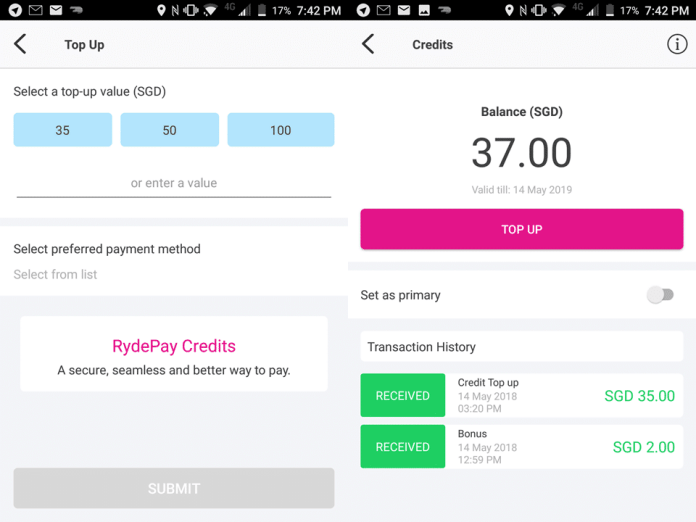 I’m going to assume that this aside, every aspect of the RydeX experience will be similar to that of Uber/Grab. You call a vehicle, you show up on time, you get in, you try to avoid any small talk or eye contact with the driver because you’re pathologically shy, you alight and say thank you, and you wonder why your rating keeps going down because no one understands introverts.

Ryde has a section on promo codes, and these mostly require you to use RydePay credits (again locking you into committing future spend with the platform). Since I wasn’t actually able to get a ride, I have no idea if they work but 48% cashback sounds promising, although it’ll have lapsed by the time you read this post. If you’re willing to park $225 with RydePay, you get 7% back on all your rides, and every 2nd Ryde trip gets 5% cashback with RydePay Visa/Master. 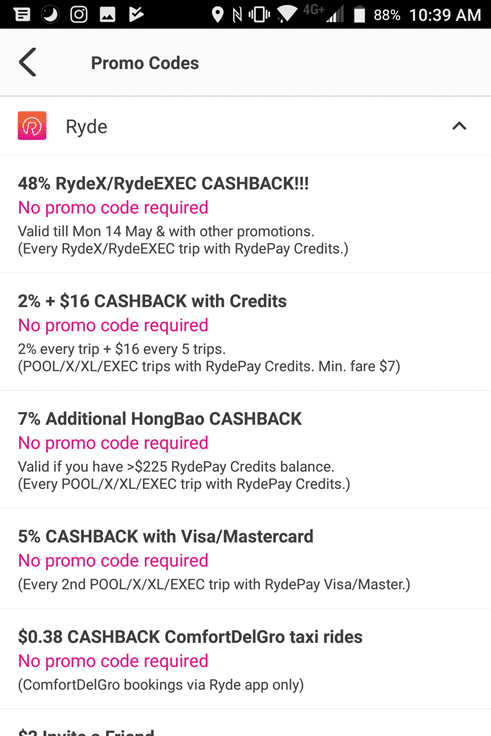 Ryde also has tie-ups with a few partners. When I checked the app, two of the four partner promos were for insurance (FWD/Aviva), but DBS was offering $10 cashback for $200 RydePay credits, and Dash was offering a $5 credit when you made your first Dash top up.

I found the Ryde UI to be more finicky than Grab (and I’m already no fan of Grab’s UI; Uber was the king of this), requiring more taps to get the same thing done. I also dislike the idea that you have to “ownself surge ownself” just to have a better chance of getting a trip, because that seems like extortion in a time of peak demand.

It’s a numbers game for Ryde now- get app downloads, get new users, get new drivers, get investors. We typically see the richest promotions during this period, so that’s something to look forward to at least. The fact that Ryde is not fully on-demand like Uber or Grab is a major problem, however, and it means you have to plan your trips around Ryde than vice versa. Hopefully once these quirks are ironed out we’ll see some serious competition for Grab, but my hope is more in Go-Jek than Ryde at this point.

I managed to take a RydeX today, after waiting about 8 minutes for someone to accept my booking. As expected, the experience was really no different from an UberX or Grab Car. The driver confirmed my location with me, showed up quickly, I got in, I got to my destination safely. 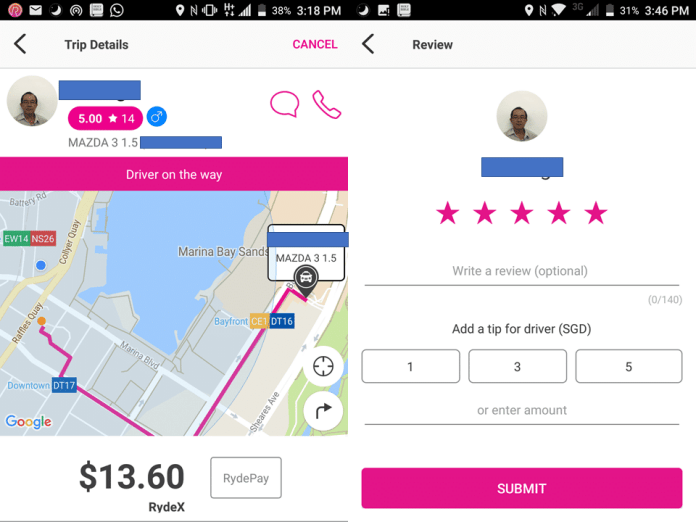 The only sort of awkward thing about Ryde is that you get an alert immediately after the ride ends telling you what rating the driver gave you. With Uber and Grab, you only see your rating in aggregate and don’t see what individual drivers gave. Maybe it’s part of the whole “build a relationship with an individual driver” that Ryde is going for (you can request for specific drivers when you make a booking), but it’s still kind of weird.

Also, Ryde by default rates your drivers with 5* when the rate driver page opens up. That’s unlike Uber or Grab where you have to manually tap your rating. It’s a small but important UX quirk that I thought you might want to be aware of. There’s also a tip option for your driver if you so wish.

Good article. Thanks. But having said that, I saw about 9 advertisements from scrolling top to bottom. Rather annoying…..

so I recently changed the ad code to adopt what google calls “auto ads”. this means google’s algorithm has complete control of where it wants to place them. if you dislike where they are, click on close and over time the google algorithm will learn that people dislike ads there and stop displaying them. that’s the theory, at least…

Does clicking on the ads earn you money? Don’t mind doing a few clicks… Help the advertisers feel happy that their advertising dollars is being spent.

yes, but asking for clicks is against the T&C and can get you disqualifed under the adsense program

i count 4 ads btw. drop me a message and show me what’s going on?

there seems to be too many ads by scrolling through just this one page. 7 ads for me

don’t know why you guys see so many. I see 4, + 1 at the top. If you could screenshot where they’re appearing and send to [email protected] I can investigate further. Thanks!

Good article and I like all the images u captured to explain… btw, I only see 1 ad on top and another 1 at the end of the post…

6 ads. none of them offensive.

7 ads for me. Pretty annoying.

I fall in love with ryde app. $19 cash back every 5 trips. Plus 1% rebates. Grab no promo i still got ryde app.
https://ryde.app.link/lwvnE3NXmM
U can download this. U get $2 off next ride and much more.
Pls note rydepool and rydeX driver pay the ERP!

Thanks for the article, i am also hoping for Jo-Jek arrival in Singapore.
By the way, i always ignore the ads and jump straight to the content, so it doesn’t bother me much.

i’ll just be honest, it’s sh1t. I don’t even bother using the app, you rarely get matched

I do drive with Ryde on and off. But honestly it’s a crap app. The Sat NAV integration is horrible. The Cash Out takes more than 10 days before it gets deposited into your bank account. No proper customer and driver support. Passengers most of the time cancel after reaching their place to pick them up. Only perk are the fare’s are higher than Grab.

I fall in love with ryde app. $19 cash back every 5 trips. Plus 1% rebates. Grab no promo i still got ryde app.
https://ryde.app.link/lwvnE3NXmM
U can download this. U get $2 off next ride and much more.
Pls note rydepool and rydeX driver pay the ERP!

RydePOOL is not the equivalent of uberPOOL and GrabShare. It’s a car pooling service like GrabHitch. Please do your research before posting even though you earn referrals from people signing up via your link

what’s wrong with you? the guy writes a such an informative article and you reply with such a bitter attitude

Good spot! Will fix it

Ryde is playing the game well. They don’t go aggressive but watches the market carefully. I dun really like the idea of scrolling through pages to see matches initially. But come to think of it, if they launch on demand like filo, I’ll probably be getting annoying calls from far away places. Somehow I agree with their slow start. I see their probability in sustaining a fight in this industry. Just don’t keep us waiting too long for on demand!