Grab has gutted the earning rates for rides and hiked the cost of vouchers for its most loyal customers.

When Uber SEA threw in the towel and sold out to Grab back in March this year, many people feared that Grab’s newly-gained monopoly power would lead to higher prices for rides.

I disagreed. There was just way too much heat for Grab to pull a move like that. The CCCS was watching, the public was watching. Pulling a fare increase would have been a PR disaster, and I’d like to imagine that the management team is smarter than that.

Besides, there existed much more subtle ways to increase revenue without increasing fares. The GrabRewards program offered an effective rebate of 3.5-4.5% on rides, assuming you used your points for Grab vouchers. If you simply cut the earn rates or increased the redemption rates, you’d have a de facto price increase on your hands while still being able to point out that fares have remained the same.

Unfortunately, it seems Grab was listening, because last night the following notice went out:

Overnight, Grab has gutted the earning rates for rides and increased the cost of voucher redemptions for its most loyal users. Because competition.

Earning rates have been devalued up to 90%

I’ve put the old and new GrabRewards charts next to each other to illustrate how the program has changed.

It would be one thing if Grab cut the earning rates for lower tier members while boosting them for top tier ones. But Grab has massively slashed earning rates across the board. Look at how many points you used to earn versus what you’ll earn now:

It’s not just rides which have been affected. The recently introduced GrabFood service used to earn 5 points per $1. That earn rate has been cut for everyone except Platinum members.

As a base or silver level member, you earn 40% fewer points than before. Gold members earn 10% fewer points, and it’s only Platinums who are now marginally better with 20% more points.

With so much competition on the mobile payments front, it’s not surprising that Grab wants to incentivize the use of GrabPay in stores, and they have increased the earn rate for Gold and Platinum members here. 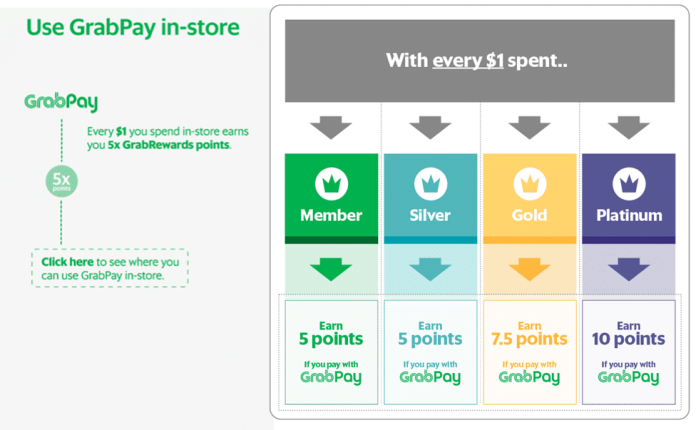 Now here’s the other shoe…

You’d think a devaluation on the earn side would be bad, but Grab has gone for the one-two punch by increasing the cost of Grab vouchers for its most loyal members.

Here’s the old comparison table that Grab used to host on its GrabRewards page. 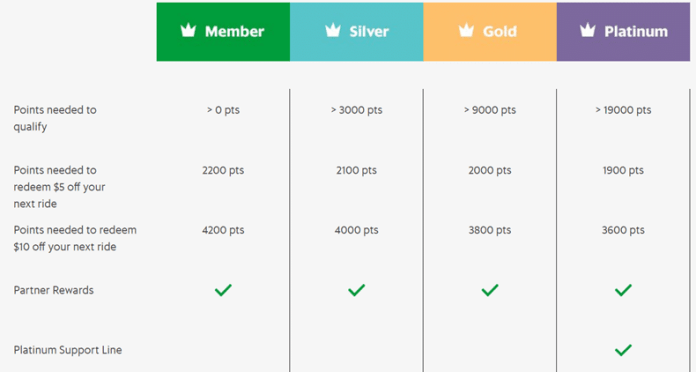 And here’s the latest table: 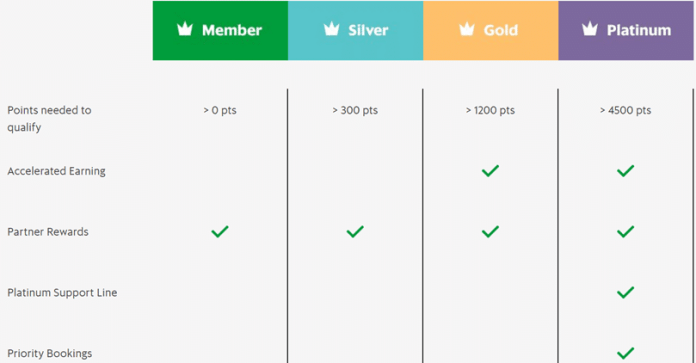 Spot the difference? Grab has rather sheepishly removed the cost of vouchers. Why? Because here’s what the new redemption rates now look like.

Perhaps this is the answer: Grab has made it much easier to earn elite status in its program.

Grab is giving a lot of members “title promotions”, but so what? Let’s think about how the effective rebate has changed. Here’s what the rebate structure looks like now

To be clear, the cost of vouchers remains the same for base level members. However, Grab has taken away one of the big incentives for people to earn a higher tier in their program- no more discounted awards.

This is no way to run a loyalty program

I’m going to take some time to pen down a few more thoughts on this over the weekend, but suffice to say, this is not how you run a loyalty program. Unannounced devaluations and sticking it to your most loyal customers? Who’d want to use your service then?

Unless you were the only game in town…

The good news is that Ryde is continuing to make strides (they had an amazing 98% off promotion between 12-3pm yesterday) and the Comfort app continues to be a solid choice.

It says a lot about Grab that it’s made people want to take taxis again.

Aaron Wong
Aaron founded The Milelion to help people travel better for less and impress chiobu. He was 50% successful.
Previous article
Tickets now available for The Milelion’s Hotel Hacks workshop
Next article
Dear Grab, there seems to be an error in your app

Time to seriously explore RYDE. I think they just burnt through so much cash trying to get rid of Uber. Now it’s payback time, from the customer’s pocket.

Totally on board with avoiding this sleazy company. I never top up grab pay anymore and would never support furthering their agenda by using it for in-store promotions.

Sadly, Grab has alway been a shitty service. It had the opportunity to focus on winning us over by providing a great customer experience (like Uber did) after the acquisition, but instead it chose to focus on cashing in instead of building customer loyalty. It overstretched into too many revenue streams, flooded our phones with crappy promos and now this. Time to explore Ryde – at least until Gojek arrives to break the monopoly. Good riddance.

A little off topic here but has anyone gone for the Ryde x Citi card topup promotion (bonus $10 with a $100 credit topup)?

So I topped it using Apple Pay with a Citi Rewards card but was denied of the $10 bonus because “it’s not a direct Citi card topup” according to the CSO via email. Isn’t Apple Pay just a payment method and ultimately still using a Citi card for payment?

If you use Apple Pay with the Citi Rewards cut then both Apple, Citi and Visa get a cut of the transaction fees, so I can understand them drawing the distinction here.

apple pay get a cut, so they cant offer you the same promo.

Lol that’s exactly what I have been doing. Taking taxis again and once in a while Ryde.

Writing was on the wall for this one way back. No way was 5% return sustainable on a product that had low or negative margin.
But yes, happy to see the next wave of entrants cause price wars and benefit the consumer while the VCs are willing to fund losses. Maybe GoJek will have a promotional rewards program that will briefly return this level of value to try to capture market share.

Since Uber exit the market, I have been using Comfort. Usually cheaper than Grab, and much pleasant ride compared to some rude Grab drivers and Trans taxi drivers. I seriously recommend to move away from Grab unless they make serious improvements.

Hahaha… Ever since they conquer uber they try to conquer every single thing now like grab food grab cycle… And services level went down so much..

I have actually seen a Grab driver involved in a hit and run. I emailed Grab on the matter and their reply was “Thank you for the notice. We will only take action when the authorities contact us.”
I was shocked by their attitude and ethic… NEVER TAKING GRAB AGAIN.

[…] also noticed that taking their usual ride doesn’t earn them the usual points. An analysis by Milelion found that the earning rate is reduced by up to 90%. While that figure looks good during the GSS, […]

[…] loyal) customers — with rebates dropping from a range of 3.5-4.5 percent to 0.7-1.7 percent, as MileLion explains in thorough detail. Worse than that, it initiated the new terms, which include these drastic drops, on a Friday and […]

[…] in July, Grab devalued its GrabRewards program overnight without notice. Earning rates were devalued by up to 90%, and redemption costs were […]

[…] you may recall, Grab devalued both the earning and burning side of the GrabRewards program without notice back in July and set the internet ablaze. After netizens got all riled up, Grab […]

I Just came back from bkk to Sg and was surprised to find out that using grab overseas you could get more reward points for less money spent. Apparently for grabride 10thb gives you 3 points for silver member, 4.5 points for gold and 6 points for platinum. out of curiosity I also checked the earning rate in Malaysia, for justGrab using grabpay you earn 6/9/12 for each tier. Both are much better earning rates than what we got here in Sg.