Singapore Airlines brand new medium-haul A350-900 will enter service in December 2018 with its inaugural flight to Adelaide on 17 December 2018.

Earlier in the year, Singapore Airlines took delivery of the world’s first Boeing 787-10 Dreamliner aircraft and in late September 2018, it will take delivery of its first Airbus A350-900ULR.

We’ve known for quite some time that Singapore Airlines had plans for a regional Airbus A350-900 aircraft to serve destinations which are within 7-8 hours of flying time from Singapore. We also knew that it will be configured with a regional product instead of the current generation of Business Class seats on its A350-900 fleet.

Hot off the press, Singapore Airlines has just announced more details on its medium-haul Airbus A350-900 aircraft.

The medium-haul Airbus A350-900 that will enter service with Singapore Airlines later this year will feature the same Business Class and Economy Class seats as those which are found on the Boeing 787-10.

Business Class will be in a 1-2-1 layout with all seats having direct aisle access as Singapore Airlines installing its latest regional Business Class product on its medium-haul A350. This same seat is also found on their Boeing 787-10 Dreamliner.

The regional Business Class product on the Boeing 787-10s are fairly comfortable and I would describe them as snug for a person of my frame (yes I’m fat).

Economy Class seats are the same slim-line seats made by RECARO and will be in a 3-3-3 configuration.

Similar to the Boeing 787-10 Dreamliner and unlike other Airbus A350-900s that is in service with Singapore Airlines, there will be no Premium Economy Class cabin onboard the medium-haul Airbus A350-900 aircraft.

The medium-haul Airbus A350-900 will be equipped with Wi-Fi which is provided by Inmarsat GX. Currently, this is the fastest Wi-Fi solution that is available to be fitted on aircraft.

The service provider for the Wi-Fi is SITAONAIR and you can have a read here of what Wi-Fi is available on which aircraft in the Singapore Airlines fleet.

Singapore Airlines has also announced that Adelaide will be the first destination to receive its new medium-haul A350-900 with Brisbane to follow in 2019. This will be a daily service to Adelaide replacing the Airbus A330-300 which is being deployed on the route at the present.

The inaugural flight for the medium-haul A350-900 will be on 17 December 2018 departing for Adelaide from Singapore as SQ279 and returning from Adelaide as SQ278. There are no exact details as to when Brisbane will be receiving the medium-haul Airbus A350-900.

At the present, SQ279/SQ278 are being flown with the Airbus A330-300 with the old regional Business Class product so this represents a huge upgrade for passengers booked on this flight.

At the time of writing, there is still a healthy amount of award seats available on SQ279 and SQ278 in both Business and Economy Class. If you want to experience the festivities of an inaugural flight but didn’t snag a ticket to Newark, there are at least two Business Saver award spaces to Adelaide at the time of writing.

Using award.flights, there is at least 1 Business Class seat available almost every day from 17 December 2018 to New Year’s Day on SQ279: 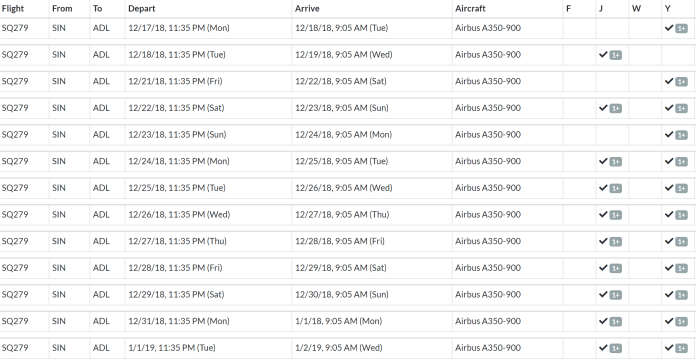 For some reason, award.flights did not show the available Business Saver space for the flight on 17 December 2018.

This flight is bookable via partner frequent flyer programs as well and upon checking United’s search engine, the flight does indeed show up but the aircraft type has not been updated.

If you happen to be in Adelaide in December, the inaugural flight back on 18 December 2018 does have Saver award space available for redemption as well, as shown on United’s and the Singapore Airlines website.

If you are fortunate enough to have United MileagePlus miles, a Business Class redemption would only cost you 50,000 miles one-way.

It’s great to finally see that the medium-haul Airbus A350-900, affectionately known as the regional A350, will enter service with Singapore Airlines by the end of the year. I’d be lying if I didn’t hope for the aircraft to be deployed to destinations such as Seoul or Taipei instead which are still served with an Airbus A330-300 aircraft.

Once more medium-haul Airbus A350-900s are delivered, we will definitely see it appearing on more routes which are currently being served by the Airbus A330-300.

Matthew Chong
Addicted to luxury travel while trying not to go broke, Matthew is always on the prowl for the best deals in the travel industry. When he's not busy studying, he can be found trawling the internet and reading up on credit cards, airlines and hotels. He also wouldn't mind taking you out on a date.
Previous article
24 hours left: United MileagePlus offering 100% bonus on purchased miles
Next article
Marriott Rewards elite status challenges available again