Flights to the United States are finally available at Spontaneous Escapes rates. Book these discounted awards by 30 September 2018.

A reminder that tickets issued under the Spontaneous Escapes promotion are non-changeable and cannot be canceled as well. This is unlike regular award tickets which at least allow you to refund your booking and miles for a fee. Thus, your travel plans have to be very firm before taking advantage of this promotion (or you should buy a travel insurance policy that covers miles and points bookings).

In addition, just be reminded that if you waitlist a Spontaneous Escape award and that award clears after 30 September 2018, you will be charged the full amount of miles required for the flight.

Flights to the US are finally available in Spontaneous Escapes

For the first time, Singapore Airlines is offering a discount for its flights to the United States with discounted redemption rates on its new non-stop flights to Newark, Los Angeles, and San Francisco. Travel dates to New York for flights booked under Spontaneous Escapes rates are valid for travel from 11 October to 30 November 2018.

If you want to redeem a Spontaneous Escapes ticket to either San Francisco or Los Angeles, the travel period for these destinations is from 1 November to 30 November 2018.

Here’s how much you’ll be paying for a redemption to the United States: 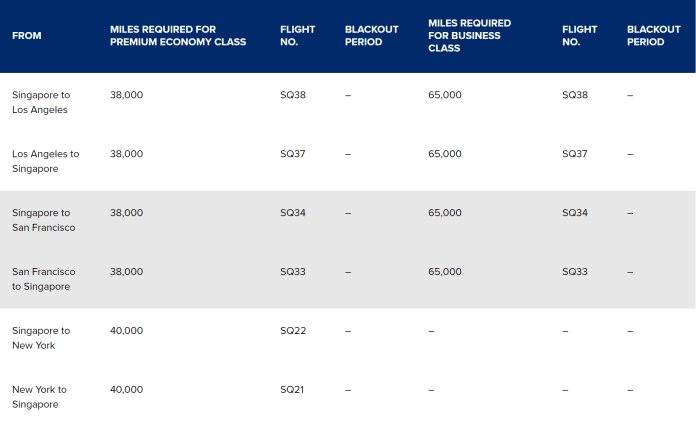 Other destinations are available too at a 30% discount

Holiday favourites of Bangkok, Hong Kong, and Seoul are back in this edition of Spontaneous Escapes. Only destinations within Asia are on offer.

Flights on SilkAir are also not available for booking, probably due to the blockbuster 50% discount which was being offered in last month’s Spontaneous Escapes promotion.

Will you be heading to the US under these great Spontaneous Escape rates?

Matthew Chong
Addicted to luxury travel while trying not to go broke, Matthew is always on the prowl for the best deals in the travel industry. When he's not busy studying, he can be found trawling the internet and reading up on credit cards, airlines and hotels. He also wouldn't mind taking you out on a date.
Previous article
SIA offering excellent non-stop Premium Economy fares to the USA
Next article
4-day flash sale: 100% bonus on all IHG Rewards Club points purchases

The NY/LAX PY deal is slightly more expensive than the cash one, especially counting the miles earned with cash deal. Only 2 days left for the cash deal.

[…] you’ve booked yourself a Spontaneous Escapes ticket to New York, the InterContinental New York might be a hotel which you might want to look at for a points stay. […]

[…] and covers such things. This is especially important if you’ve booked an award ticket under KrisFlyer’s Spontaneous Escapes promotions, as those are strictly […]

[…] the last edition of the KrisFlyer Spontaneous Escapes, we saw for the first time ever that Singapore Airlines was offering a discount on Saver award […]