Back in July, Grab devalued its GrabRewards program overnight without notice. Earning rates were devalued by up to 90%, and redemption costs were increased

Needless to say, the interwebs were not amused, and Grab eventually agreed to postpone the redemption changes until 30 September (although still retaining their reduced earning rates).

On 30 September, redemption rates were supposed to increase to the amounts shown below:

In other words, you’d pay the same for a reward, regardless of your tier. Silver, Gold and Platinum members would see redemption rates increase for rewards.

The good news is Grab is now walking back that change, as revealed in an email sent out to members today: 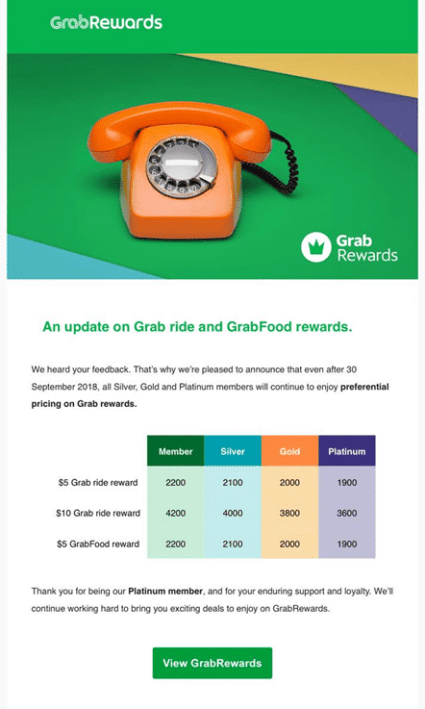 What does this u-turn mean for rebates via GrabRewards before and after the devaluation? Not a whole lot, to be honest. The real devaluation was on the earning side- what happened to burning was salt in the wound more than anything else.

Looking at rides an an example: with the old system, you’d earn 16 points per $1 when using GrabPay on rides, which a Platinum member could redeem for a $5 voucher at 1,900 points. This means you’d spend $118.75 to get a $5 voucher, or a rebate of

Now, you earn anywhere from 3-6 points per $1 with GrabPay on rides, which makes the rebate:

To be fair, you do earn higher rewards rates when you use GrabPay in stores, but this has been a pretty comprehensive devaluation from a rides point of view.

I’ve said from the start that my issue with what Grab did wasn’t so much the devaluation of earning rates, but rather the devaluation of burning rates. Earning refers to future behaviour- if you dislike what Grab has done, you’re free to take your business elsewhere. Burning, however, relates to your past behaviour. The points you have are a reward for your past business, so Grab unilaterally devaluing them overnight is unfair, because you can’t take that past business elsewhere.

Reversing the redemption changes was the right thing to do, and I’m glad that Grab has done it. See what happens when everyone complains on the internet?

With its negligible earn-burn margin, Grab has effectively been sidelined to become just a search portal for cheaper rides.
What surprises me here is them withholding the planned devaluation in spite of the recent CCCS fine.

Out of curiosity, are the benefits of being a Grab Plat anything to shout about? Keen to hear of others’ experiences…

Hi JT, as a Plat member, you get prioritised booking and redeeming offers. But I haven’t been able to make use of them as I have 3 kids, so usually we take the public transport or cab. 😛

As a plat member, my booking get prioritized. All of my bookings are almost instantaneously allocated a driver. Same thing happens when I travel and book at Malaysia 😉