KrisFlyer Elite Gold members now unlock further rewards at the 60, 75 and 100,000 elite miles mark. But would you really want to?

I’ve often joked that being a KrisFlyer Elite Gold isn’t much to shout about. Sure, you get all the usual benefits from being a Star Gold member, but apart from that you don’t actually get anything from Singapore Airlines itself.

Yes, you (allegedly) get priority waitlisting for award tickets on Singapore Airlines, but that’s basically it. Heck, when flying out of Singapore you’re not even allowed into the Silver Kris lounge. Instead, you’re exiled to the wasteland that is the KrisFlyer Gold lounge, with no champagne, showers, toilets, or happiness.

Well, an interesting email went out today from Singapore Airlines to all Elite Gold members: 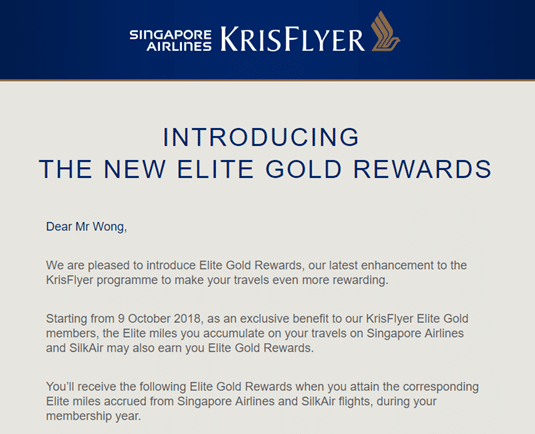 The good news? KrisFlyer is adding new benefits for Elite Gold members, starting from 9 October. The bad news? They’re not actually that great.

Although you can requalify for KrisFlyer Elite Gold by clocking 50,000 elite miles from other Star Alliance carriers, only elite miles earned from SQ/MI will count towards the earning of Elite Gold Rewards.

The full T&C of these rewards can be found here. Let’s break these down one by one.

This reward lets you earn double the miles for a single flight segment flown on Singapore Airlines or SilkAir. The double miles is applied after including the cabin bonus, but not the tier bonus.

“SQ doesn’t do upgrades”, I hear you say. “Especially not for non-PPS members”. Well, not anymore! When you hit 75,000 elite miles, you can redeem a one-cabin class upgrade. These upgrades are confirmed at the point of booking and are subject to availability. You can use this upgrade for either yourself or your redemption nominee, and only for commercial bookings.

However, and this is a big however, only the following commercial booking codes are eligible: Economy class – Y, B, E, M, H, W; Premium Economy Class – S, T, P; Business Class – Z, C, J, U.

That means discounted fare buckets, like D (where discount business class fares like RTW tickets book into), R (the class in which the recent awesome premium economy fare sales on the non-stop US flights booked into), K, N, Q, V (the economy lite fare buckets) are not eligible.

It seems a bit churlish to complain, because SQ didn’t have to give something, but the whole thing feels a bit “give with one hand”. If someone’s flown 60,000 elite miles with Singapore Airlines, does it really matter to give him/her a one-way upgrade on an economy lite ticket on limited short haul routes?

Limited short haul routes? Yes, these upgrades can only be used on certain routes:

Those last 2 bullet points may confuse some people, until you remember that SQ indeed operates 5th freedom flights in these regions. You can, for example, buy a flight from MEL to WLG (but not SYD to CBR):

Similarly, you can buy a flight from ARN to DME:

Remember, however, that this is a one-cabin upgrade only, so even though SQ361 is operated by a spanking new A350-900, you’ll only be able to upgrade from economy to premium economy. MEL-WLG is operated by a B777-200 which does not have a premium economy cabin, so upgrades from economy to business class are possible (check out this article to learn which aircraft has what seats). That said, the 777-200s have angled flat business class seats- hardly an aspirational redemption.

Singapore Airlines operates First Class on its 777-300 aircraft that ply the Manila and Jakarta routes, so if you just happen to have a (non-discounted) business class ticket I suppose that’s one way to try The Private Room for less.

What do I make of this reward? I think it’s unnecessarily restrictive, given that I’m struggling to think of how many people could clock 60,000 elite miles just on Singapore Airlines/SilkAir within a year. Sure, it’s nice if you earn it, but I wouldn’t do a further 10,000 miles just to get it. When you hit 100,000 elite miles, you get one premium economy advance upgrade. As is the case with the one-cabin upgrade, this voucher can only be used on commercial bookings in the following economy fare buckets: Y, B, E, M, H, W. That’s to say, economy lite fares are not eligible.

You can use this upgrade voucher for yourself or a nominee.

Why Elite Gold Rewards doesn’t really make sense to me

Look, I get the idea behind Elite Gold Rewards. It used to be that there was no further incentive to fly more after you hit the 50,000 elite mile mark. Whether you just scrapped 50,000 or whether you road-warriored your way to 500,000, it didn’t really matter. I imagine Elite Gold Rewards were created to address that issue.

But therein lies the problem: while rewarding members who go above and beyond the 50,000 elite mile threshold is a nice gesture, these rewards simply aren’t strong enough to encourage incremental business.

Suppose I’ve just hit 51,000 elite miles in my membership year and have the option of arranging further business travel. Will the proposition of a double miles voucher, a (highly restricted) one cabin upgrade award and an economy to premium economy upgrade voucher persuade me to do another 9,000, 24,000, 49,000 elite miles with SQ/MI? I doubt it.

On the other hand, suppose I’ve just hit 51,000 elite miles in my membership year and have a ton of compulsory business travel left to do. I may well hit 60,000, 75,000, even 100,000 elite miles in a year. But I would have done that anyway, with or without the presence of Elite Gold Rewards.

You see what I’m driving at here? These rewards aren’t good enough to sway discretionary travel. So what happens is that SQ will end up rewarding customers they didn’t really need to reward, while those who needed a little extra push won’t be particularly inclined to jump on.

Conclusion: better than nothing

“Better than nothing” is probably the best way of summing up the new Elite Gold Rewards. Don’t get me wrong, I don’t want to come off as ungrateful or anything, and it’s good that there’s some incremental recognition beyond the 50,000 mile mark. But I’d be very surprised if these led to any discernible change in customer behavior.

Aaron Wong
Aaron founded The Milelion to help people travel better for less and impress chiobu. He was 50% successful.
Previous article
Free Club 1 Hotels membership and 10% off bookings made in October
Next article
Get 3 nights for the price of 2 at InterContinental Hotels around the region

I totally agree with your analysis. I had similar thoughts reading through that email.

It is a Long while back that I was flying on SQ (from Perth to SIN that was) that a cabin was half empty. Usually SQ is packed whenever I fly them, and I fly them almost every week.

I believe SQ doesn’t need any incentive to fill up their planes , they are usually packed. So why would they want to give something away for free if they don’t have to. The new “incentives” speak that language.

Yup…. its the first ‘something’ in a long time for us long suffering KF Gold guys who can never fly business. So indeed is better than nothing… but it won’t change my behaviour at all.

Do Elite Golds really have so much discretionary travel to “spend”?

Have and will continue to clock my flights on other *A programs that give gold quicker and/or longer where possible.

totally agree with u! now I just credit all my SQ biz trip flights to AL, worth a lot!

I’m in pps, does it mean I don’t get benefits when hitting 60k, 75k etc… Feels wrong to me

VS
Reply to  Ttj

Same question here. Kind of unfair when we need to clock 60k PPS value to get standby upgrade

SQ is taking a leaf out of CX’s revamped MP Club, which offers what it calls Mid-Tier Benefits to encourage flying/spending when a member has attained any elite tier and is unlikely to earn any more points to attain the next tier, or, in the case of Diamond tier, simply has no incentive to earn more points. CX’s Mid-Tier Benefits are infinitely more generous than this laughable attempt by SQ to incentivize flying beyond Gold. In terms of upgrades, for Gold members, CX offers four free bookable upgrades to the next higher cabin on the aircraft on up to medium-haul… Read more »

JetBlue Founder's Advice to Himself and How United, Delta, and American Fleets are Changing - View from the Wing

Yawn indeed, would rather accumulate the points on other FPP.

The incremental effect is really negligible.

I believe it’s just the marketing department doing their job to fulfill some lousy KPI or to cater to some bosses’ whims, and to clear the limited budget they have before the financial year ends. It is the typical corporate run-of-the-mill activity without thought or results to show.

I’m well into the 100k so got everything, but I think I will forget about these pretty soon.
They meet to setup a real platinum level, it ensure super frequent flyers to get into PPS the hard way.

I am always tempted to push my Qantas membership back up to gold, then up to the next level. The only thing stopping me is temporarily flying without lounge access…
But if they offered me a deal I would switch

Unboxing the AMEX Platinum Charge, and four things to do after that – The MileLion

[…] Star Gold status gives like lounge access, extra luggage, and priority boarding (KrisFlyer Gold has recently started giving some additional benefits too, but they’re not that impressive in my opinion). It’s certainly a lot easier than […]

Typical Singapore company. Want to give but dare not give. Always have a load of T&C. Wonder when will this mentality change.