Well, this is contagious. After HSBC and Citibank announced their intentions to hike foreign currency transaction fees, BOC credit card holders received an SMS today directing them to the following circular. 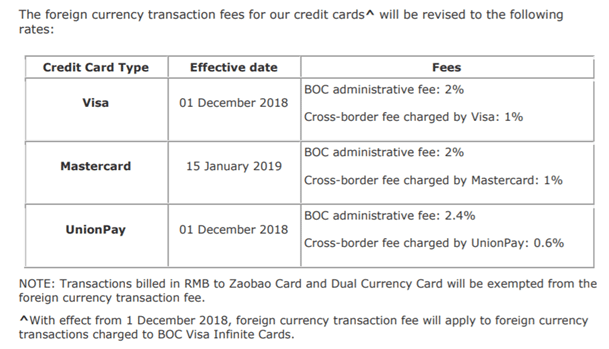 It’s pretty self-explanatory, but the main highlight for those of us in the miles game is that from 15 January 2019, the BOC Elite Miles World Mastercard will charge a total of 3% foreign transaction fees, up from the current 2.5%.

How does this change the cost of miles? 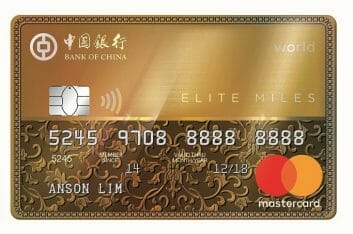 You’ll remember that the BOC Elite Miles World Mastercard is offering 5 mpd on foreign currency spending until 31 December 2018, and 3 mpd after that. This means that your cost per mile will be:

With this change, here’s how the different banks will stack up in terms of foreign currency charges (inclusive of the AMEX/Visa/Mastercard imposed fees).

From 1 January, it may be more advantageous to use your UOB Visa Signature card overseas for 4 mpd at a 2.8% fee (0.7 cpm), assuming you’re able to hit the threshold spending level of S$1,000 foreign currency spending in a statement period.

Maybe it’s just monkey see, monkey do, but I’m curious if there’s something else that has  triggered the banks to increase their foreign currency transaction fees. As mentioned in my HSBC post, fees have increased, but rewards have not.

That said, the BOC Elite Miles World Mastercard is offering an unbelievable number of miles on FCY spending until the end of the year, at a very reasonable fee. The catch? Even if you apply right now, there’s no guarantee you’ll get the card by year end. They’re just that slow.

Has anyone noticed that with all these changes, it’s actually American Express offering the lowest foreign currency transaction fees in the market at 2.5%? Who’da thunk it? Let’s see how long that lasts.

Finally, a side note: it’s interesting that the BOC Visa Infinite card will cease to offer a foreign currency transaction fee waiver from 1 December 2018. This, together together with CIMB’s decision to scrap the foreign currency transaction fee waiver from 1 January 2019 on the Visa Signature and Platinum Mastercard, means that we will have no cards in Singapore that offer any fee waiver on FCY spend. When banks first started doing this, I was hopeful that the trend would catch on, but it looks like that was a pipe dream.

Junk bank. Took 2.5 months to send me my card with a credit limit more than half my monthly salary. For avoidance of doubt, my monthly salary is not around the $2,500 amount. Junked the card the instant I got it in the post and asked BOC to close down my account. I won’t be surprised if they also screw up their PDPA compliance in handling my personal data after i ask to cancel my account with them.

Why would you do that? You can just send more money to your Credit Card account and earn better miles.

I too got a low credit limit, so I just send money to the account when the credit limit run out. Sure, it defeats the purpose of having a credit facility, but you want to earn more miles right?

lol.. his ego is too big. why does he need to earn miles when he wants to act atas. just buy your business class with your “not $2500” salary. lol

The reason why I said that is to preclude any suggestions that the credit limit is slashed because the annual salary is at or close to the MAS minimum requirements. Thus leaving the only other reason as BOC having junk assessment.

Why should i pump money into my credit card artificially to raise the limit? I earn zero interest when I do that.

Amusing to watch the mile wannabes get all riled up because of their own preconceived notions.

And oh, to that keyboard warrior earlier, yes I am QPPS. Hosnap.

Ben- When you send money in advance to your BOC credit card the actual interest payments you lose are probably less than a dollar – no matter how good of a risk free yield you can achieve.

So, to forgo a few cents or dollars of interest to get around 150% more airmiles compared to another bank card you might be offered a higher credit limit is worthwhile.

At the risk of attracting more asinine comments from some of the crowd here, some of the intended payments I wanted to make with the BOC card (way back in early September, which of course was not possible given the absurd processing time) are in the range of around S$20,000. I’d get quite a bit of interest, with that sum sitting in a decent account for a period of 3-4 weeks instead of inside the artificially inflated BOC account.

Not sure how it is less than a dollar…

well if you spend 20k on something, you’re going to have to pay it back right…. 20k worth of interest in a month on a 1.8~2% range thats $30 of “lost” interest for the month where you transfer it to BOC in advance right? Plus if you spend the 20k, you’re not going to actually get the $30 interest as you got to hold it in the bond for a year at least. You’re gonna make $30+ worth of additional airmiles when spending 20k on the BOC card vs the next best card right? well done, you played yourself –… Read more »

Unlike some of you miles wannabes here that love to be spoonfed by the Milelion, I don’t just factor in miles miles miles in every decision I make. Yes, purely in numbers calculation the extra miles would have a value (assuming the usual 2 cpm) in excess of $30. But the extra miles with BOC is not worth my subjective valuation of the increased risk of screw-ups by BOC, given the horrible experience even with the application process. If it were let’s say, Citi Prestige offering 5 mpd on overseas spend, and I had a tiny credit limit on the… Read more »

your subjective value has been placed on a banks brand. If you’re valuing customer service because you often have banking issues then its a different issue.

you compare against a goverment bond because its a risk free asset. What are you placing your 20k in to then that yields better with the same risk profile over a month, which pays out monthly?

you would get a dollar interest if you held it in your bog standard banking account.

whatever you say, you’re short changing yourself using a weaker card.

“The catch? Even if you apply right now, there’s no guarantee you’ll get the card by year end. ”

Please. Drafting is bad. Please amend to, “Even if you apply right now, there’s every guarantee you’ll not get the card by year end.”

exactly. ben needs to retake English classes. the possibility of obtaining the card by year end is still there, hence there is no guarantee.

No Brainer
Reply to  Ben

Humour is lost on the ignorant brown-nosing crowd here

Kiwi
Reply to  No Brainer

And logic is lost on brainless folks here

If it is a pure no FCY fee card you’re looking for, there’s always the low profile ICBC Global Travel MC. It charges 2.5% but gives a limitless 3% rebate on all FCY spend. I’ve had this card for about a year now and rebates have been consistently accurate and on time.

There’s no place for rebates/cashback here.

ah yes, knew i was forgetting something! I remember there were 3 obscure banks which had 0 FCY fees credit cards. remembered CIMB and BOC, couldn’t remember the third! but now that CIMB and BOC have scrapped theirs, let’s see what ICBC does

After 4 months of waiting (applied when the card was first announced) I got an automated rejection letter in the mail. In the letter it said you can visit the credit bureau for a copy of a free credit report. I already own a few high end cards so I know credit rating shouldn’t be an issue. After visiting the website out of curiosity I got the following message: Please be informed that the redemption of free credit report does not apply in this application as there is no recent credit enquiry on your credit records by any of our… Read more »

Watch out. Don’t say you have high end cards in this forum. It’s all TooEasy to invite unthinking responses from keyboard warriors.

I dream of a world where people would simply put up or shut up..

Pot calling the kettle black.. he says she says.. you say so I say.. say you, say me.. say it together, naturally…

Lol.. saw what you did there.. taking a leaf out of your own book perhaps edit your comment to

Watch out. Don’t be a teachers pet and say you have high end cards in this forum. It’s all TooEasy to invite unthinking responses from keyboard warriors.

Credit check was done in August, and “recent” to CBS is within the last 30 days that’s why you are not seeing any “recent” credit checks

Finally got my card on Saturday, and I applied day 2 of the roadshow in raffles place…..

I just got a bunch of letters in the post, enclosing my PIN numbers for the BOC cards, which I had cancelled in the first week of October. Yet, just couple of days back I received an automated SMS from BOC confirming the closure of my card accounts with the bank.

because no one likes you.

LOL. wethebest, you should really keep mum. All tooeasy to spot you.