ANA 787s all feature the airline's excellent 1-2-1 cabin product, but not all variants are the same. Check out the differences between the -8 and -9 aircraft in this post.

After a three hour layover in NRT (where I did all the essentials- Sushi Kyotatsu, Japanese snack shopping and a nice long shower at the ANA lounge), it was time to board NH801 to head back to Singapore. 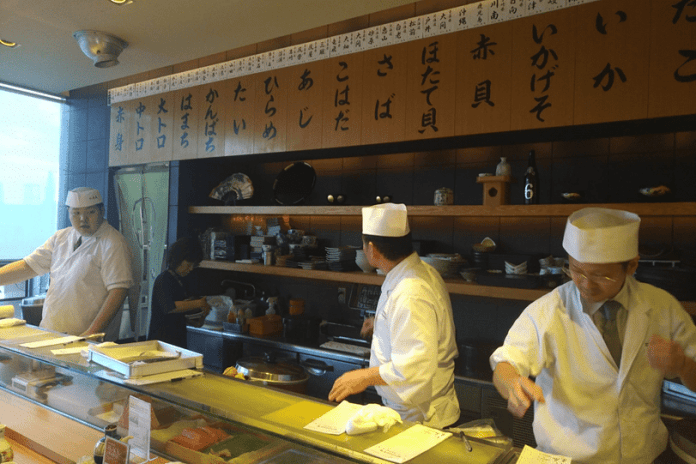 Boarding was at Gate 28F, one of NRT’s bus gates (the closest lounge to this gate is actually the United Club NRT, which urgently needs an upgrade to the new Polaris standard). By the time I reached 28F, the first bus had already left for the aircraft. Unlike some airlines, ANA does not cater a special bus for premium cabin passengers when using remote gates, so priority boarding doesn’t really mean much because you still need to wait for the bus to fill up before departing the gate. 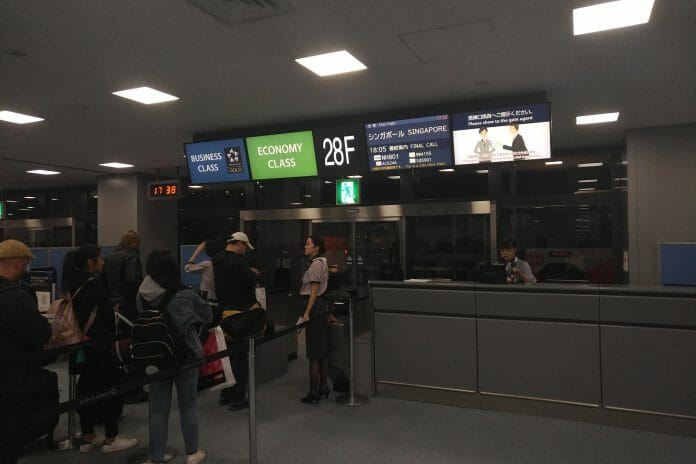 Today’s flight from NRT to SIN would be operated by a B787, an aircraft I’d flown several times before. I expected the Business Class product to be exactly the same as the 777 I’d just stepped off, which is why I was a little surprised when I stepped into the cabin… 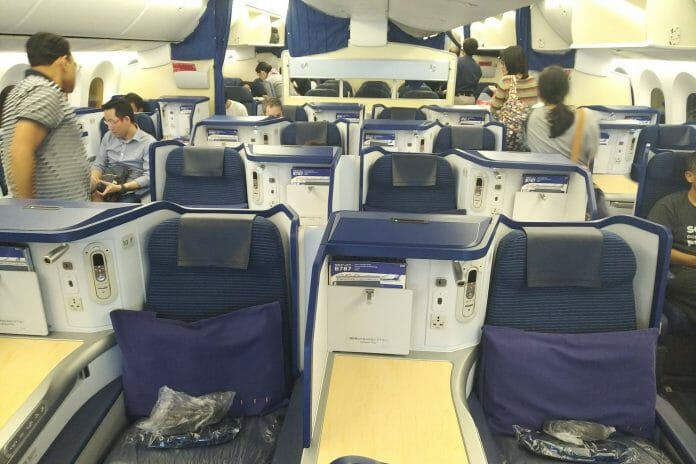 On first glance, this 1-2-1 layout may appear to be the same as what you’d find on any of ANA’s 77Ws. But look closely at the seats and you’ll see some key differences.

This is the Business Class seat on the B787-9 that was operating today’s flight. Note the wooden finish on the side table, the location of the IFE remote, EmPower and USB outlets, and presence of a headphone hook.

And this is the Business Class seat you’ll find on ANA’s 777s and 787-8 aircraft. Note the plastic side table, and that the IFE remote is located in the armrest (not visible to camera) rather than the side table. Similarly, the EmPower and USB outlets are located below the IFE display in front of you, and instead of a hook to hang your headphones, there’s a small bin.

If you’re flying Business Class on an ANA B787, be sure to check whether it’s a -8 or -9 model. -8 models are more similar to the 777s in terms of the seat, whereas -9 models have the wooden side table.

I’d gone for seat 9E, at the front of the second Business Class cabin. 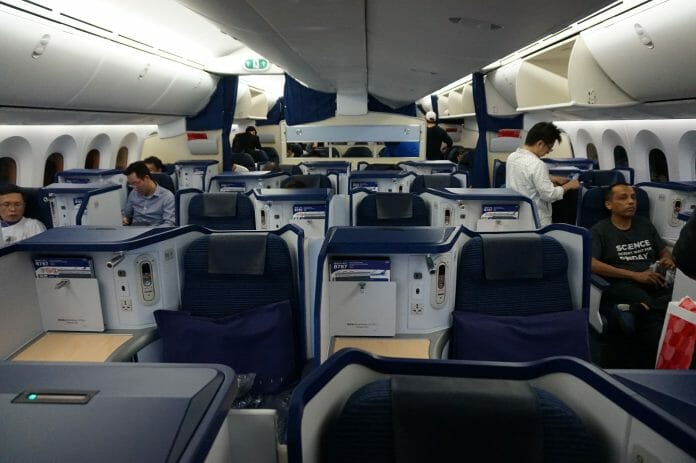 In terms of storage space, you don’t really lose much between the 787-8/777 and 787-9. The side table is about the same size, and you could argue that the 787-9 actually has slightly more space because they’ve gone for a headphone hook instead of a headphone bin. 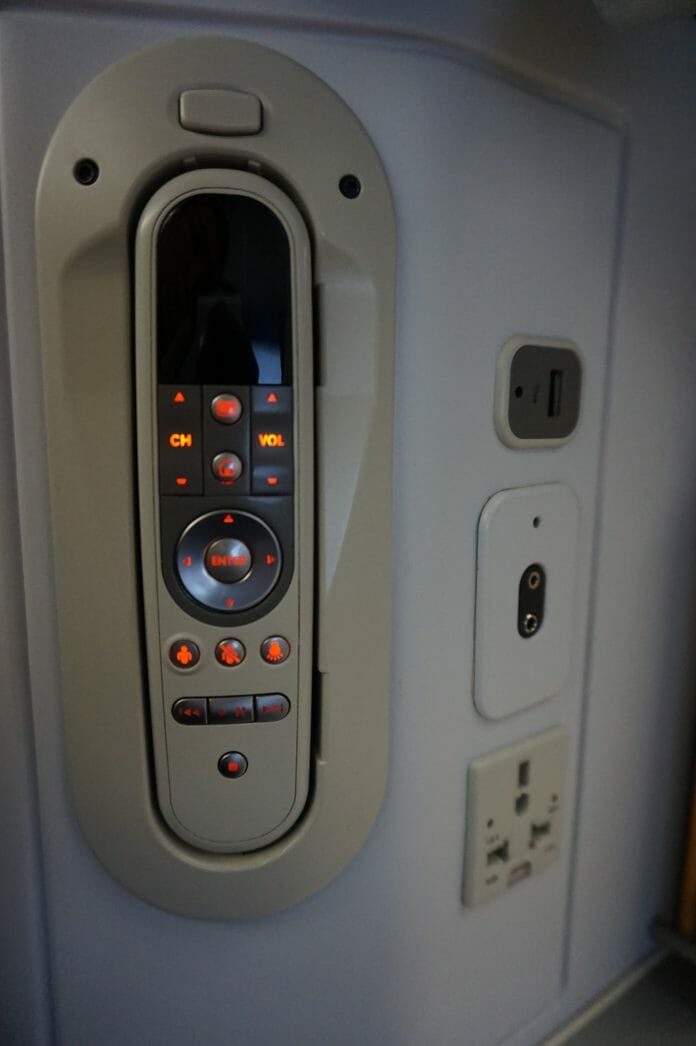 Placing the USB/EmPower outlets here also makes a lot more sense. On the 787-8/777, your outlets are below the IFE screen in front of you, which means you need to run the cable across your body if you want to charge your devices while you sleep. Not so on the 787-9.

The 787-9’s seat controls have five buttons as opposed to the six on the 787-8/777. The missing button is the one for the side table lighting, since this wooden table does not have that feature.

Note the differences in the tray table positioning as well- on the 787-8/777 it’s located in front of you, beneath the IFE display. On the 787-9 it slides out from beneath the side table on your left or right. This is probably one of the areas where the 787-8/777 product is designed better, because that design allows you to slip in and out of your seat during meal service more easily.

ANA’s Business Class headphones on the 787-9 are also different- they have a much more comfortable over the ear design. The headphones I got on the 777 were smaller and fit on your ears, which made them feel painful over a prolonged period.

There was also a pair of slippers and a shoe horn waiting at the seat. I’m sure these must have been available on my previous flight, but we were never proactively offered them. 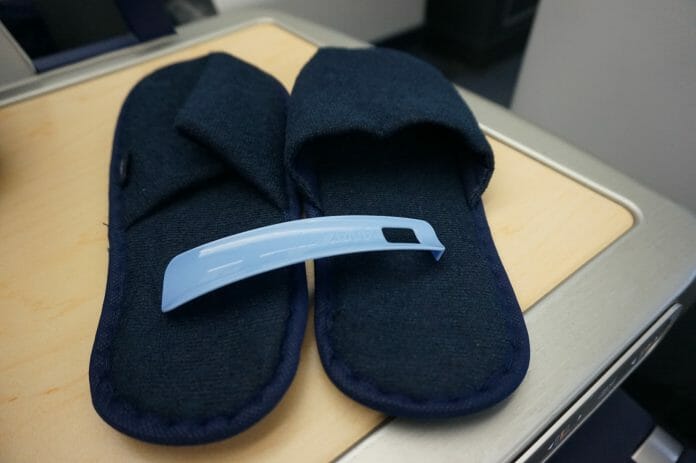 The chief pursuer went to each seat to introduce herself. I could already tell that the service on this flight would be much better than the indifferent service I’d encountered on the previous leg. Another member of the crew gave out newspapers. I noted an interesting article in the WSJ. What an interesting flight! If only someone did a super detailed review… 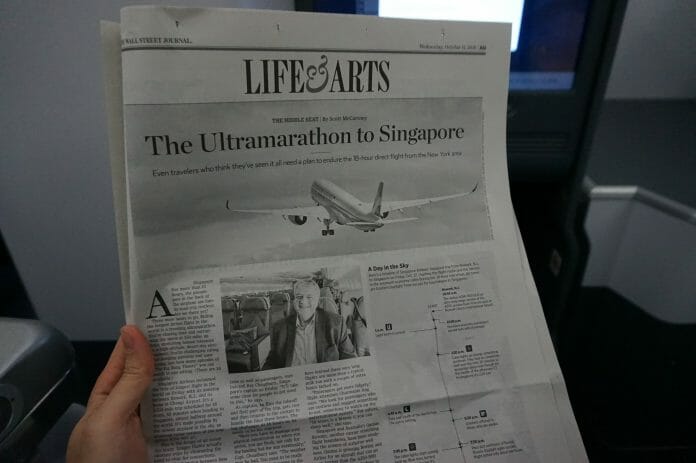 We pushed back on time and took off after a bit of a queue. The flight time from NRT to SIN would be 6 hours and 35 minutes, with clear weather expected along the way.

As the plane climbed, I checked out the IFE system. 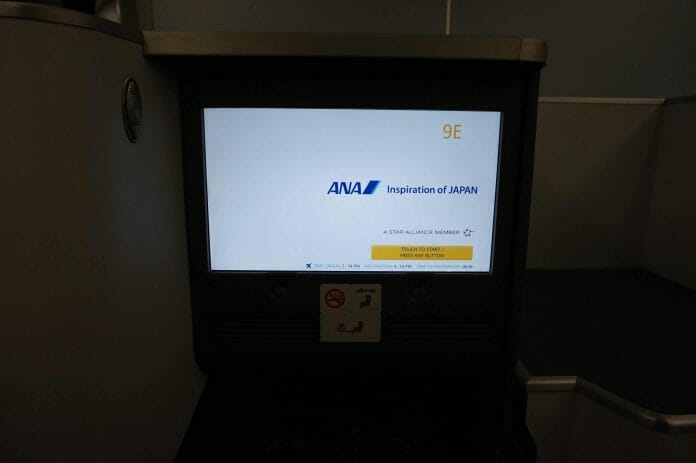 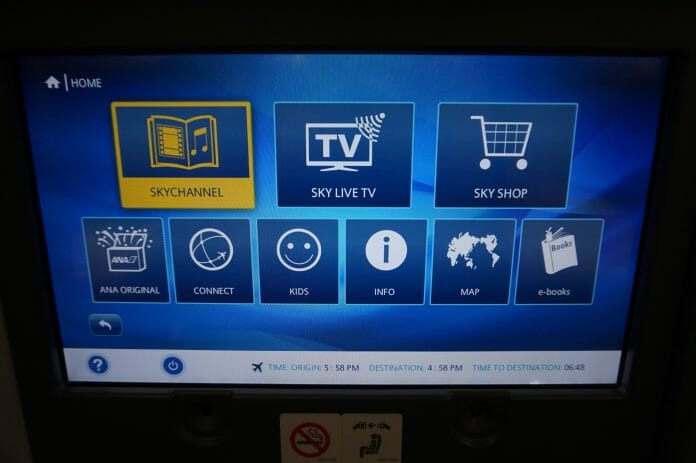 There are only 3 channels available, but on the plus side, you can watch Trump’s favourite news network wherever you go. 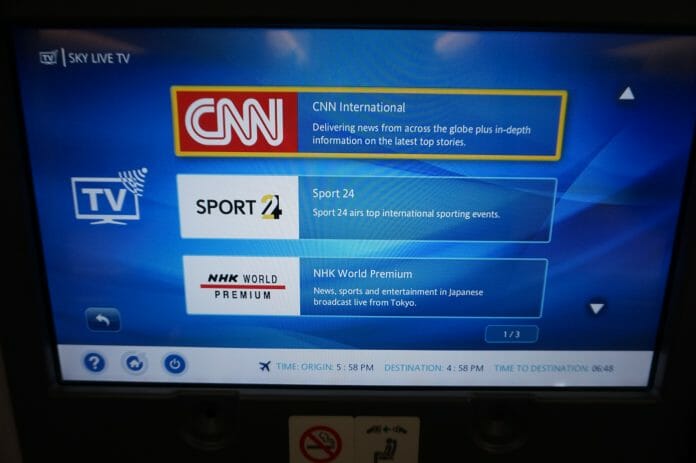 The cabin lights came on shortly after the seat belt sign went off, and the crew distributed menus for dinner. Interestingly enough for a NRT-SIN route, the international selection featured Indian and Middle Eastern food. 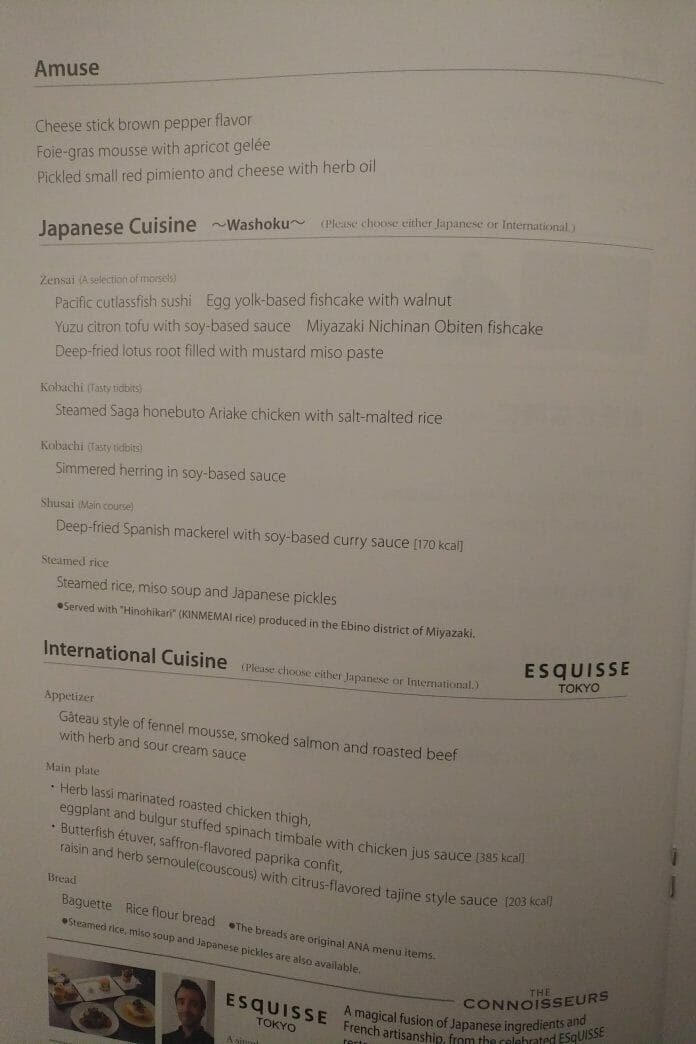 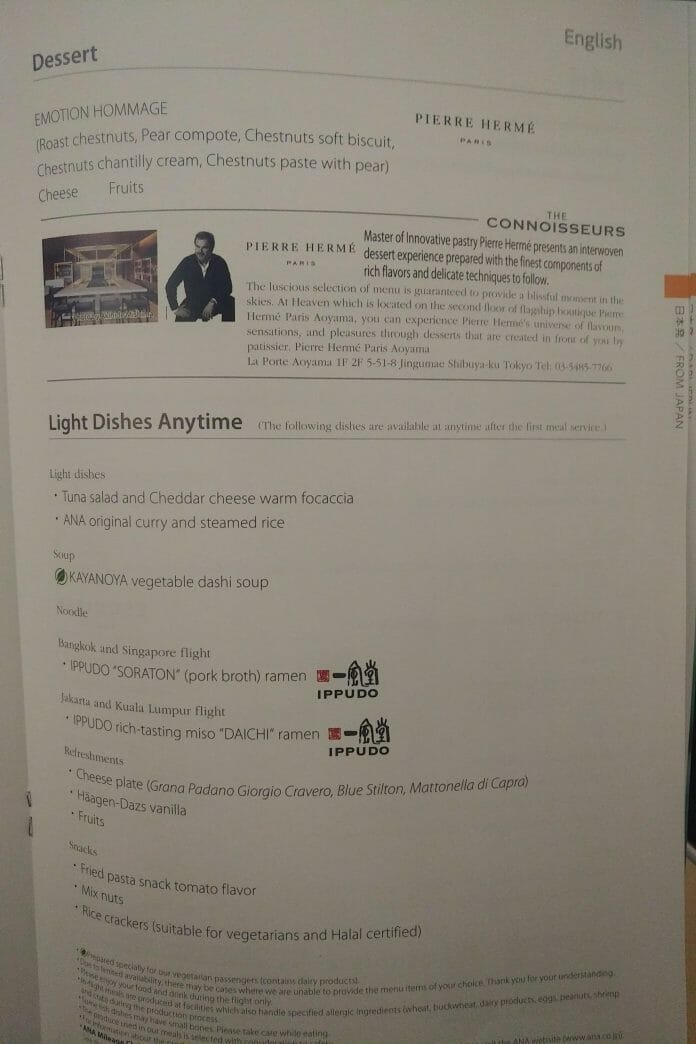 The wine list was simpler than the previous flight from the States, and the selections different too. 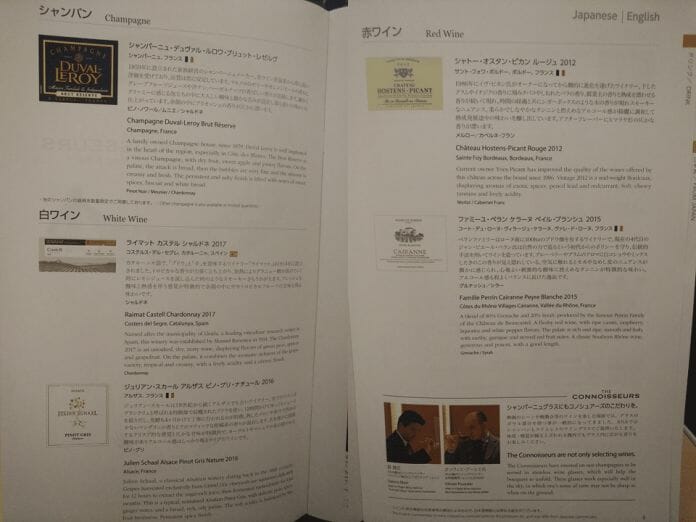 Here’s how each wine is rated, according to Vivino.com

I’m not a fan of Duval-Leroy, but was delighted that the crew brought around an additional, off-the-list selection: 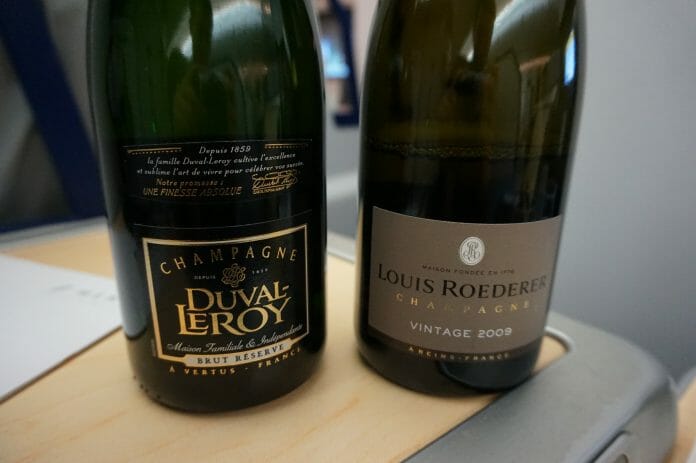 Louis Roederer Vintage 2009 champagne! (Vivino:4.1) In Business Class! There was only one right thing to do: 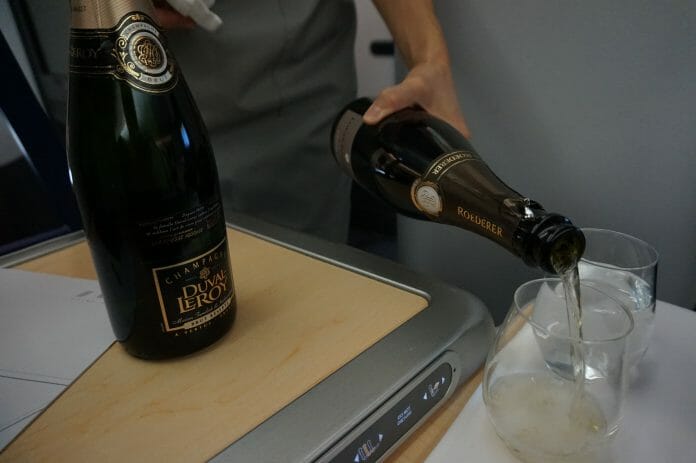 Dinner started with ANA’s amuse bouche course. I’ve said enough about this in previous trip reports for you to know I’m not a fan, but never pass up the chance to photograph it. Today’s amuse bouche consisted of brown pepper flavored cheese sticks, foie-gras mousse with apricot gelee, and pickled small red pimiento and cheese with herb oil. 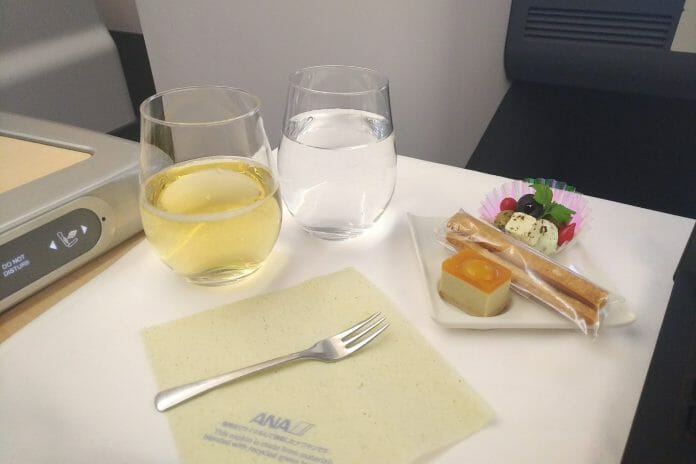 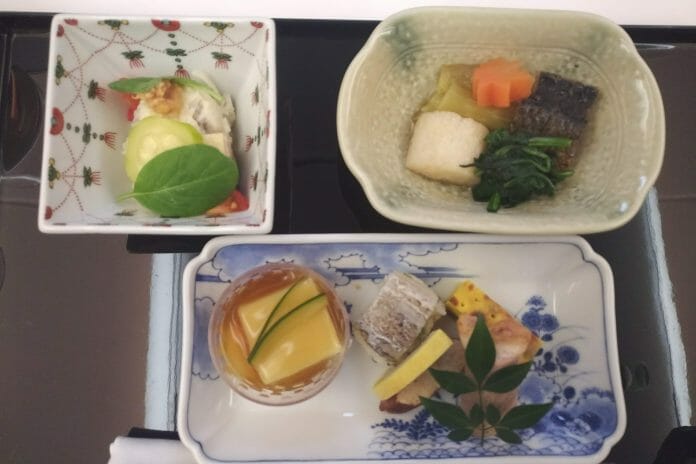 The main today was deep-fried Spanish mackerel with soy-based curry sauce. I’m not a fan of fried fish; I find it’s a way to mask the lack of freshness. Fortunately the rice this time round was incredible, exactly what you’d expect of Japanese rice catered out of Tokyo. 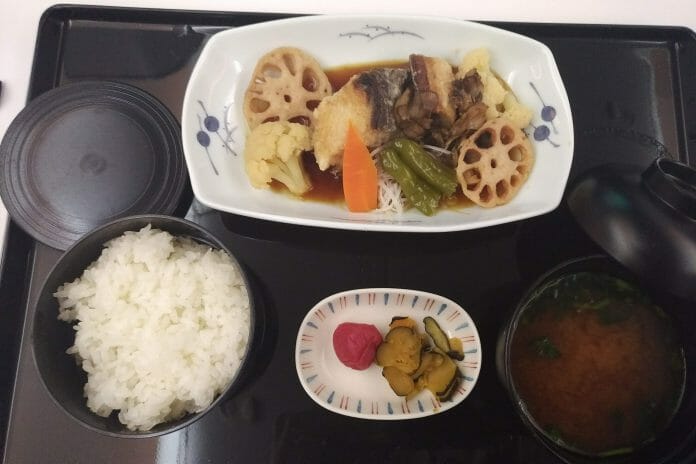 For dessert I went with the healthier choice of fruits. 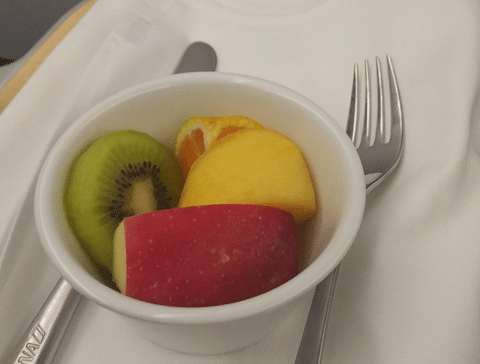 I didn’t feel that tired after dinner, so I decided to get some work done. ANA’s 787 aircraft have WiFi service, as the stickers in the cabin remind you. 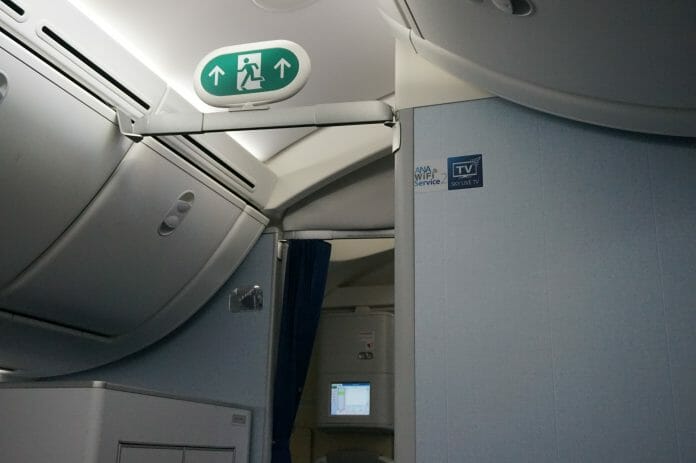 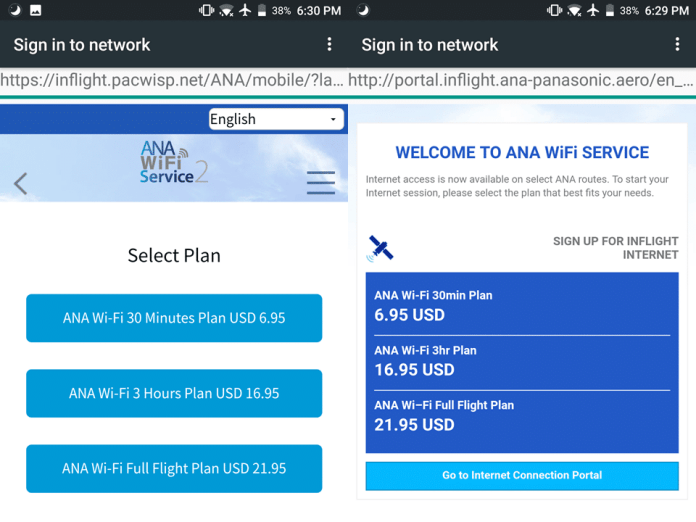 The 777/767s have what’s just called WiFi Service, where you pay  US$19.95 for 100MB. The internet was decently fast, although it’s limited to one device at a time so you’ll have to toggle back and forth between accounts if you want to use it on both your cell phone and laptop.

I passively watched Deadpool 2 in the background while I worked, before realising that so much of the movie had been cut it was pretty much unwatchable. That’s just unthinkable: why would you make cuts to a family friendly movie like Deadpool 2? 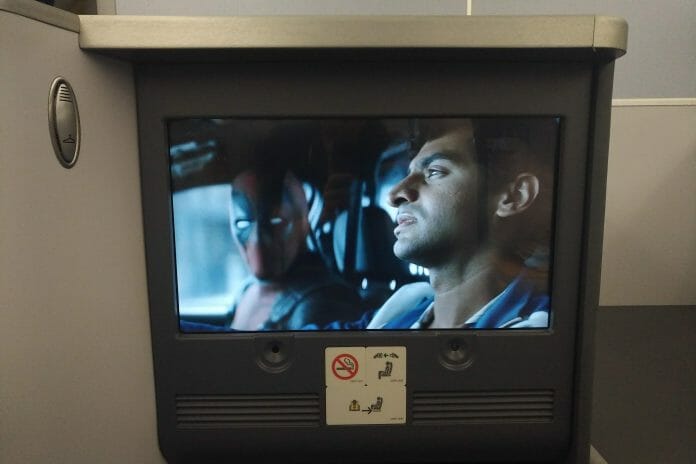 Toilet break time! It’s the usual ANA 787 toilet, with window, no touch taps and bidet. No fancy toiletries had been stocked for the NRT-SIN route, although there was an amenities drawer with toothbrush kits, individual mouthwash sachets, and face & body sheets. 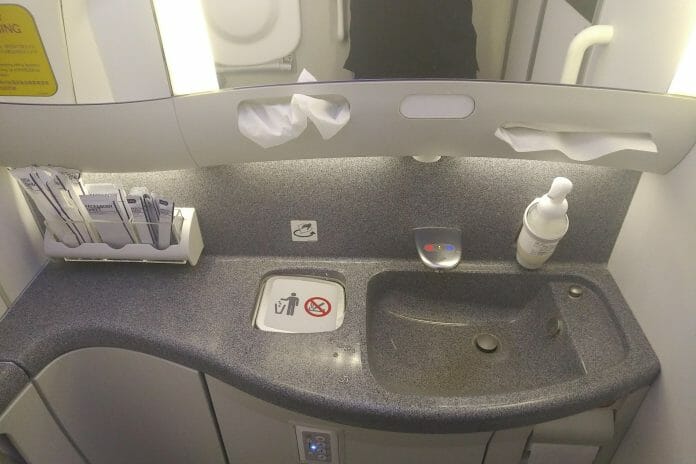 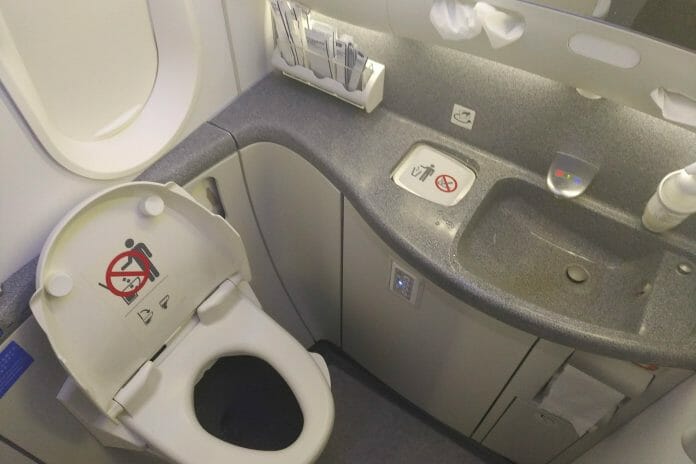 I’ve not been able to figure out ANA’s rules regarding the issuance of mattress pads, but this flight had them. It’s a welcome additional layer of separation between you and the seat fabric, even if it’s not nearly long enough to stretch all the way down to your feet. 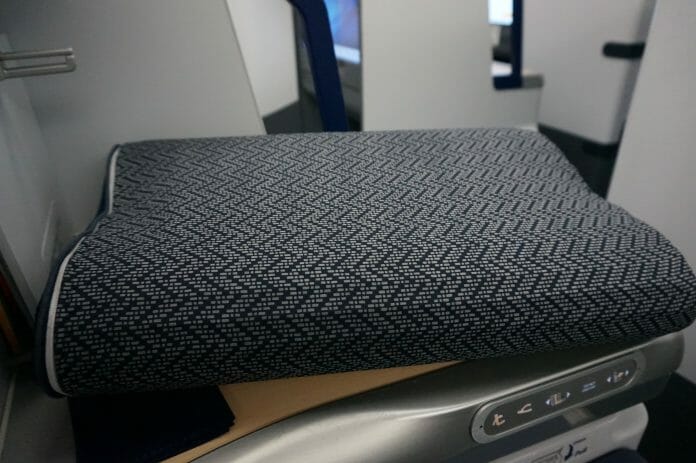 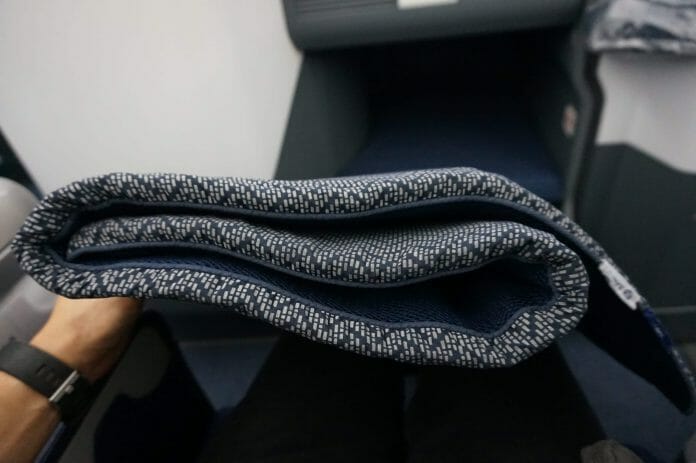 Remember: you’re supposed to sleep with the patterned side down. I’ve been doing it wrong all this while. Who knows how many Japanese stewardesses have covered-mouth giggled at me in the galley? 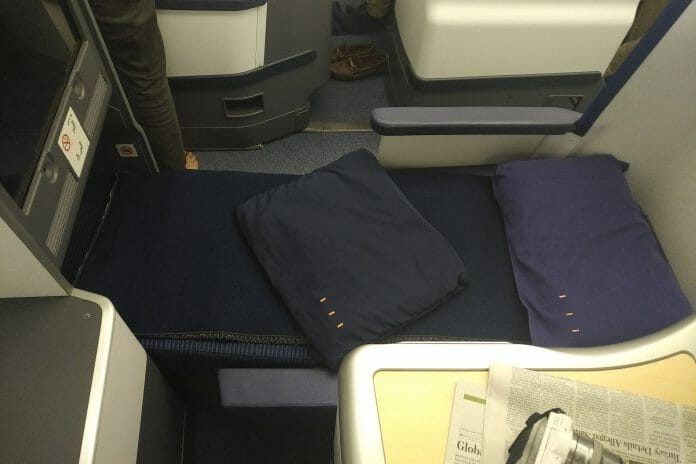 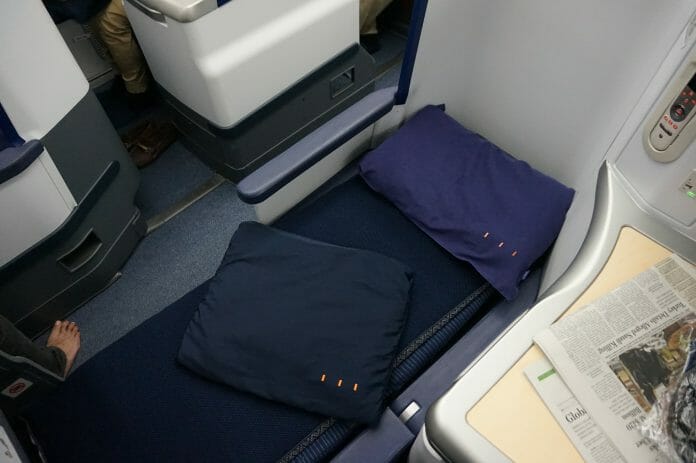 A brief nap, and it was almost time to land in Singapore.

Do I prefer the 787-8 or 787-9 Business Class seat? I think the tray table is better designed on the -8, but the positioning of ports and IFE remote make so much more sense on the -9. The headphones are also more comfortable on the -9, for what it’s worth. I wouldn’t get too worried about which aircraft I get, ultimately, because you’ll still have the same excellent ANA service on both.

That brings us to the end of The World’s Longest Flight trip report! Perhaps one day I’ll review the long foretold Sydney to London flight.

ANA also has another variant of J seats for their regional 787s that feature cradle seats. Don’t think they fly them to SIN anymore but still something to take note of if you fly other ANA regional routes.