A recap of the changes announced in KrisFlyer's newsletter.

It’s been quite a day so far KrisFlyer members. We know that award prices will be increasing from 24 January 2019, and we’ve had some time to consider the implications. And all that before 10 a.m!

KrisFlyer has just sent out an eDM to members explaining the changes, and with that comes a few more interesting announcements…

Upgrades from Economy to Business Class allowed across all aircraft 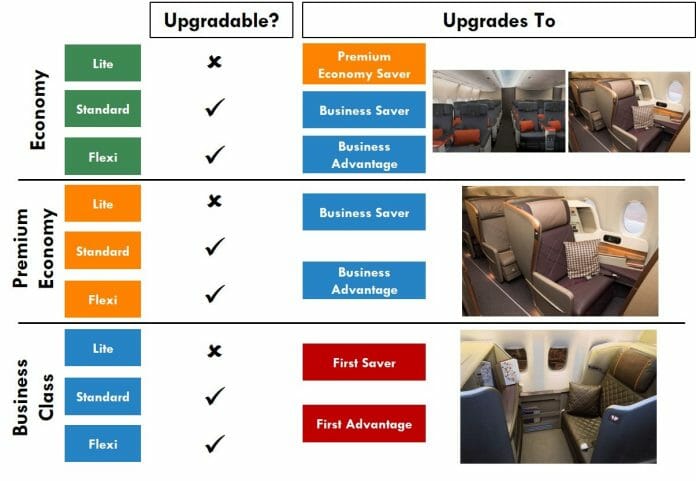 Singapore Airlines has historically adopted a one-cabin upgrade policy. This means that upgrades from Economy to Business Class are not possible where an aircraft has a Premium Economy cabin.

That’s going to change for Economy Class, effective immediately, where two cabin upgrades will be possible even on 4 cabin aircraft. You will not be able to upgrade from Premium Economy to First Class.

Given that most of SQ’s long haul fleet has Premium Economy, this will be a welcome change especially for corporate travelers whose skinflint travel departments won’t spring for anything other than economy.

SQ has increased the number of miles required for an upgrade. On first glance, it appears to be pretty marginal, but you can refer to both tables here

Waitlists outcomes will be known 14 days before your flight

From the second quarter of 2019, all successful waitlist redemptions will be confirmed (and unsuccessful ones cancelled) at least 14 days before the flight. You will still be able to waitlist for redemption upgrades up to and including the time of departure.

The waitlist is one of the most frustrating things about the KrisFlyer redemption experience, so this is very welcome news. I suppose this means that all flights within T-14 will either be available for instant confirmation or not. At least now we’ll have a better idea of how much award space SQ actually releases at the last minute.

Spontaneous Escapes to be made a permanent feature

I thought that Spontaneous Escapes was already a permanent feature, but in any case SQ has confirmed this.

KrisFlyer has teased that the February edition of Spontaneous Escapes (for travel in March) will contain “never-before redemption deals”. I suppose that’s the proverbial carrot to accompany the devaluation stick.

Award calendar to be added to Singapore Airlines website

So many times in our Milelion workshops I’ve lamented the fact that Singapore Airlines doesn’t have an award calendar on its website. This means that if you don’t find the seats you want on the first date you search, you need to grope in the dark by pressing the Next Day/Previous Day buttons, a guess and check approach where you hope that the next load will yield results.

Given that the average loading time per request is about 40 seconds (or slower, depend on how the SQ website is feeling that day), all this time can really add up. Contrast that to other airlines like United, which have an award calendar that shows you up to 30 days of award space. This means more targeted searching and less time waiting.

Adding an award calendar to Singapore Airlines’ website is long overdue, and I can’t wait to start playing around with it. The feature should go live on 31 Jan 2019, but given SQ’s IT prowess let’s see…

Some of these changes are great and long overdue. Award calendars, more certainty about waitlist outcomes, and double cabin upgrades are all much appreciated. It doesn’t remove the sting of a devaluation, of course, and I’ll reserve judgment until I see the execution of these initiatives, but it’s something at least.

Just wondering, will there be spontaneous escape for the month of Jan to fly in Feb?

Hey Aaron, what’s your take on the wording? It’s my feeling going forward SQ will favour Y upgrades over outright redemptions on waitlist. It also means no more last minute waitlist options. On the 7 day planner, I looks nice BUT they say it’s only available 3 days before departure; does this mean you can’t do a last minute redemption?

I am not sure that the waitlist changes are entirely welcome. The downside is that it will now no longer be possible to redeem miles for tickets bought <2 weeks before departure. I've also had some success with 11th hour waitlist clearances (e.g. 2-3 days prior to departure) which can happen either because someone cancels or the airline releases more space; this change in policy means that late cancellations by other passengers will not allow other passengers to take this space.

if seats still available <2 weeks, why can't the flight be redeemed?

I agree – you’re misunderstanding the change. Within 2 weeks seats will either be available or not, which will make things a lot clearer for planning purposes. There is no reason why extra seats couldn’t be added within those two weeks if someone cancels or revenue management releases some.

As Aaron said, will be interesting to see how that shapes up as currently we’ve not been able to see how generous/consistent they are (though I’ve always had great success immediately clearing last minute wait list with seemingly v busy regional flights, especially in J, so let us hope that continues!)

VS
Reply to  jon

Because they will close the waitlist 2 weeks before a flight. Currently waitlists close 3 hours before the flight (for new additions). I’m actually more annoyed about this than the miles devaluation.

Flights can still be redeemed <2 weeks before departure. But it also means the queue sequence previously created will be gone in those two weeks. If any opens up last minute, it's up to fastest fingers first. But interestingly, it's still possible to waitlist all over again at T-2 weeks or less

random but anyone realized the signature in the update e-mail. hahahahha.

where art thou mabel?

SQ main page has just been updated!!!! But the underlying pages seem to be still the same …

It’s back to the old page now 🙂

The improvements to award search and waitlist clearing are most welcome. But we have to see how, in practice, will the award redemption process really change.