In June last year, I wrote about Fuzzie, an app which sells discounted gift cards. At the time, Fuzzie was offering 8% cashback off Grab gift cards and an instant $5 credit for new customers. This seemed like a great deal, so I posted an article which included my referral code.

People started signing up and I saw the referrals tracking properly. A few weeks later, however, my account was blocked and I received an email from Fuzzie with the subject “Police Report” 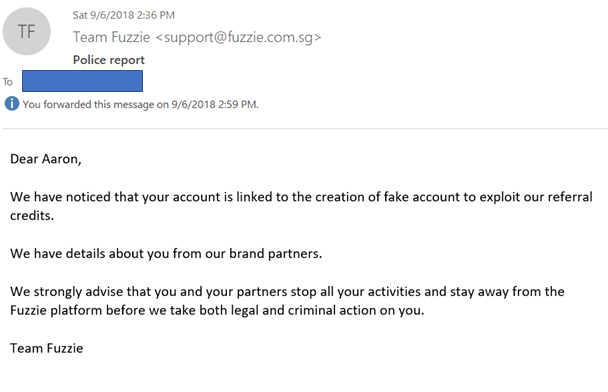 That’s…aggressive, to say the least. Fuzzie’s founder later explained that the automated system had mistakenly flagged my account because of the large volume of referrals, but they’d since rectified the situation and added my account to their safe list.

I didn’t really care for the threatening tone of the warning email, but fine, mistakes happen. The team issued a new referral code and I assumed that was that.

Fuzzie came back on the radar recently when I included their ongoing Grab gift card deal (31% cashback this time) in the weekly Milelion Deal Summary. I’m guessing this led to another influx of sign ups with my referral code, because sure enough, my account got suspended once more.

This time round I received an email from Fuzzie asking me to verify my account. 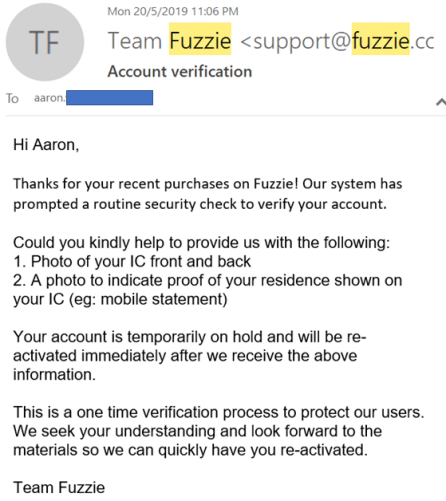 Well, OK. I thought we sorted this out the last time round, but in any case I sent the documentation over on Tuesday and received this response on Friday: 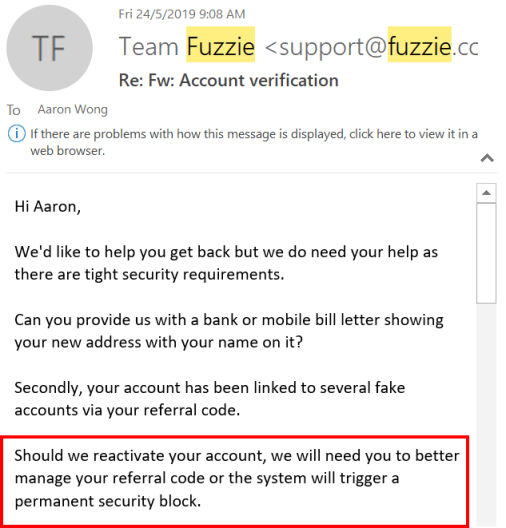 I cannot, for the life of me, figure out what “better manage your referral code” is supposed to mean. It’s not like this is a targeted code which is only supposed to be available to selected users. This is a public referral code, and you’d think a company would want users to share theirs with as big an audience as possible.

If it later turns out that some of those who signed up with the referral code were bot or fake accounts, then of course action should be taken to shut them down. But I don’t see how it’s the fault of the person whose referral code was used (unless, of course, he or she is somehow in cahoots with the creators of the fake accounts).

It seems silly to have to state this, but once a referral code is posted online, the user has no control over who signs up with it. There will be legitimate customers. There will be bot accounts. The job of the platform is to encourage the former and weed out the latter, not engage in collective punishment.

As of today, my account is still blocked and I’ve heard from several readers who have also been banned after signing up with my referral code (aaronwxm). My guess is that Fuzzie has blacklisted the code and anyone who signs up through it, so I’d avoid using it for now.

If you’ve been using the Fuzzie app with no problems, that’s great. I hope you stocked up on Grab gift cards because 31% off is a fantastic deal.

That said, I just can’t bring myself to use or recommend an app that adopts a “guilty until proven innocent” approach to its users. I can chalk up what happened last year to a hyperactive anti-fraud system paired with a poorly-worded automated mail, but this is a “fool me twice” kind of situation.

Signing up for cards or making purchases through the links in this article may generate a referral commission that supports the running of The Milelion. Found this post useful? Subscribe to our Telegram Channel to get these posts pushed directly to your phone, or our newsletter (on the right of your screen) for the latest deals and hacks delivered to your inbox.

Aaron Wong
Aaron founded The Milelion to help people travel better for less and impress chiobu. He was 50% successful.
Previous articleUpdated: How can Singaporeans skip the immigration queues overseas?
Next articleAMEX International Airline Program: Get discounts on Singapore Airlines (and other) premium cabins

I am laughing my head off, i was one of those that signed up the 1st round with your code Aaron, and though i could have sought your help to get it unblocked.

Just never did it, too much bother.

Plenty of apps out there, if the leadership cannot get their act together, customers want an easy and seamless user experience.

For those who are participating in the weekly jackpot draw, do note that we have won the major jackpot once and a minor one once, but never got paid ever. It has been 10 months since we first one, Fuzzie has been uncontactable after multiple emails to the support address. The whole jackpot tickets feels a lot like a scam now.

I’ve been using Fuzzie for close to 2 years and won the third prize in the 4D draw mid last year. I promptly received an automated email notifying me of my win, provided my bank account details and received the credit in my bank account (about 2 weeks) subsequently. Not sure if there have been any changes lately…but i don’t think it’s a scam.

Same for me. Won second prize last year. Didn’t receive anything from them in the end. I would stay far away from them.

black list innocent people and put the blame on customers?

sure, I will just blacklist fuzzie.

fuzzie has a superiority complex. who are we kidding.. they need us more than we need them!

in today’s age, customer service is vital. screw up, and the customers will screw you back.

I laughed hard at the “legal and criminal action”. Good luck with that in front of a Singaporean court.

Prolly another ponzi on the verge.

All these fin tech startups. Completely unsurprising. Wait for the excitement and themselves to literally… die down.

Good article! I will steer clear from this kind of company. Any sane person will do the same.

I just recently got myself into fuzzie. The first time I read your article on threatening email, I was very baffled on why a company would do that.
Ytd, I received that threatening email to be taken off from membership just because i went and clarify certain T&C.
Same case for me. Will not recommend this app to anyone.