I spun the Chope birthday wheel 2,739 times. Here’s what happened.

May the odds be ever in your favor.

I’ve never considered myself to be particularly lucky.

In all my years of flying, I’ve never scored a free upgrade. I always get a parking ticket the one time I forget to put a coupon, and the “Get Lucky” song sounds to me like a surefire way to get an STD. 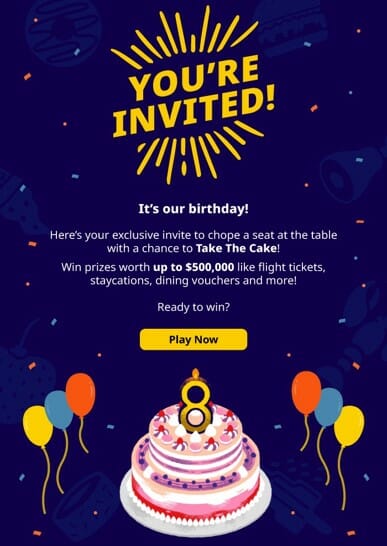 But I’m not one to turn down a birthday invite, especially when vibrating massages are on the menu, so I create a free account and get three spins instantly. 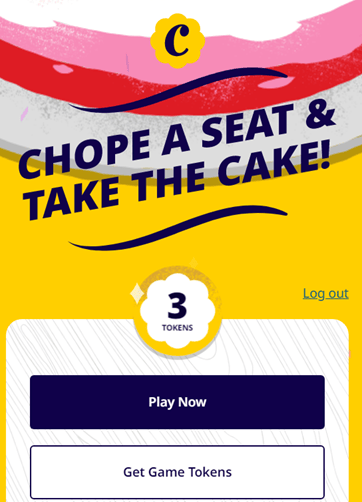 The game is incredibly simple. All you need to do is spin a lazy susan with eight dishes and see which one lands in front of you. Your prize (if any) is displayed on screen and an email is sent with the details. The whole thing is over in 20 seconds.

And yet once you spin, you want to spin again. It’s some straight up Pavlovian jackpot psychology, and it’s deceptively addictive.

My first experience is underwhelming. Out of three tries, I get one no-win, one bonus 50 Chope$ code and one $2 ChopeDeals voucher (minimum purchase $30). I rope in my wife to try, and she fares no better with two no-wins and a 100 Chope$ code. The game has a referral mechanic which offers five free spins for every person you refer, so I pen a quick post and head off to bed.

I wake up the next morning to this. 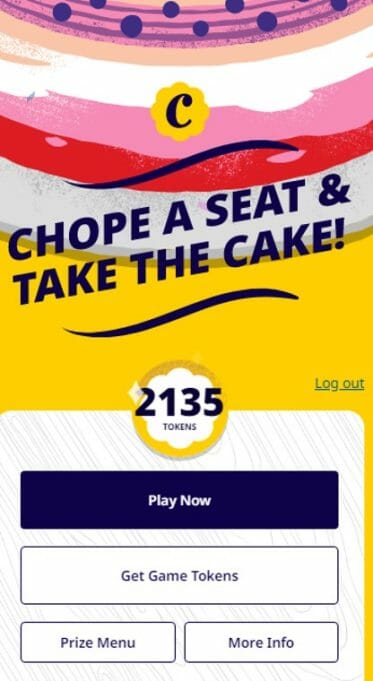 Apparently, everyone loves a game of chance, especially when it’s free-to-play.

The morning is spent doing non-stop spinning. As the day goes by, more tokens come in such that I’m gaining spins at a faster rate than I can use them.

My wife is starting to suspect something. During lunch, my hands move furtively beneath the table, swiping and tapping away. While she’s counting her calories, I’m counting the times the wheel spins. While she’s playing with her food, I’m playing with how strong I swipe the spin bar. While she’s marveling over predestination as demonstrated in Ephesians, I’m marveling over predestination as demonstrated in Chope’s algorithm not giving me a staycation.

Oh crap. She’s staring at me. I’m supposed to be nodding or not nodding or something.

“You’re playing that stupid game again aren’t you?” she says.

She rolls her eyes.

I quickly do the math. I now have 2,500 spins and climbing. Each spin involves three taps- one to play, one to spin and one to return to the play screen. This means 7,500 taps, a guaranteed recipe for Carpel Tunnel Syndrome and grounds for my wife to banish me to the couch for the rest of the year.

I need a way of automating this.

Later that afternoon I research the problem and come across a program called iMacros. This Chrome add-in lets me record a sequence of mouse clicks, just what I need to automate a repetitive task.

After many rounds of trial and error, I finally figure out I need to add ERRORIGNORE and WAIT commands before it runs smoothly. The end result looks something like this:

I smile smugly as the macro purrs along. The Chope wheel spin hypnotically, and before long, I start to notice enough trends to put together the following. 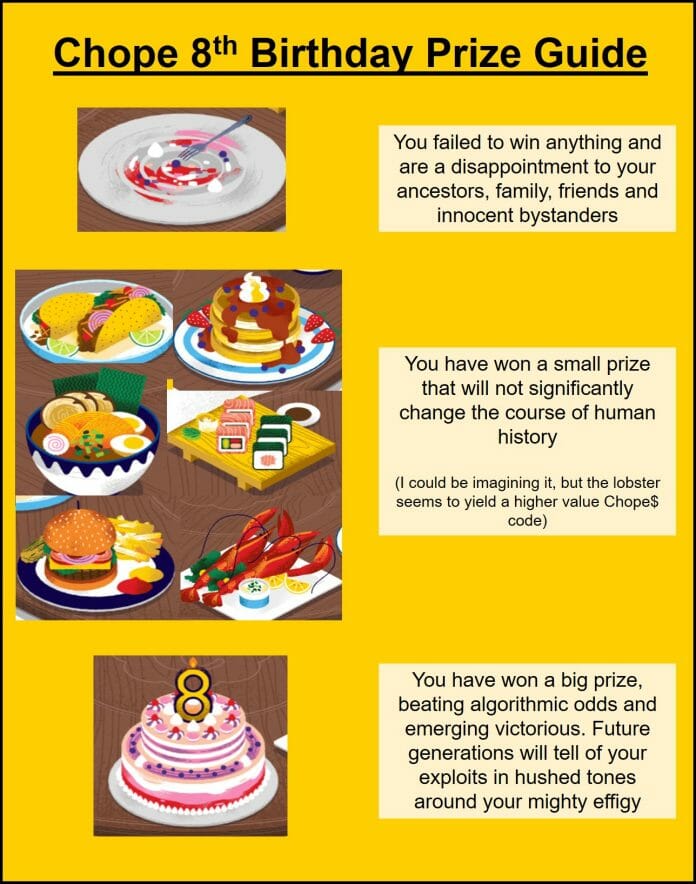 As the wheel spins, my inbox starts to overflow with Chope prize emails.

I want to take stock of my winnings, but I’m not about to trawl through a few thousand emails. I need a way to parse all the information into an easy-to-read format. Thanks to Email Parser, I’m able to automatically capture the prize values and codes in an Excel file as soon as they enter my inbox. 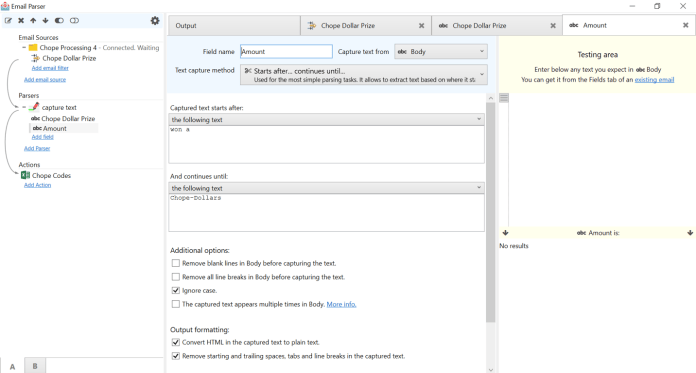 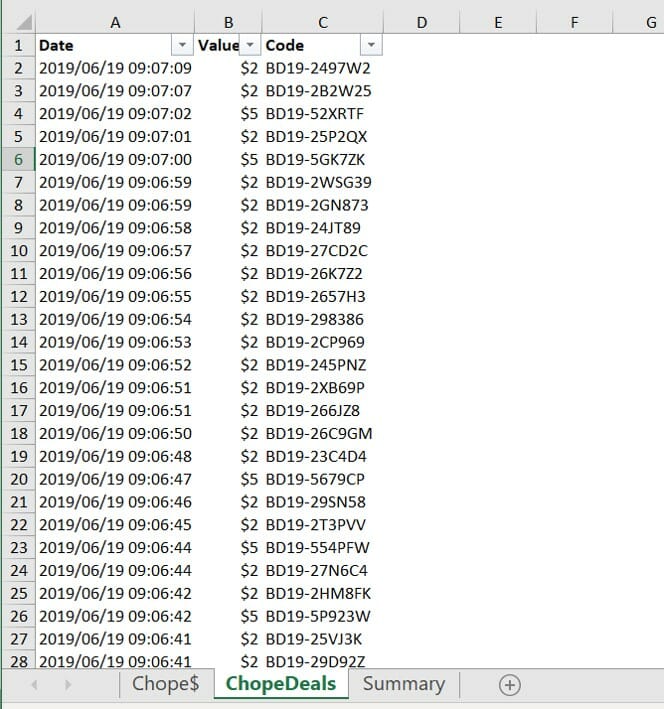 About twenty three hours later, it’s done. My macro has run a total of 2,739 spins, and my email parser has dutifully compiled each and every win.

The results? Well, they’re either a grim reality check on the odds of winning, or a meta-commentary on the state of my luck.

In 2,739 spins, I win a total of 2,358 prizes, or a win rate of 86%. That doesn’t sound too bad, until you consider that of the 2,358 prizes, 2,357 (99.9%) are Chope$ or ChopeDeals vouchers. The only other prize I win is a $100 dining certificate at somewhere called Lokkee. It’s not quite “the cake is a lie“, but assuming that spin events are all independent events (and they should be), I believe my sample size is large enough to conclude the following:

It’s true that since certain prizes are in limited supply, the odds will technically keep evolving as prizes are won. That said, 2,358 wins and 2,357 Chope$/ChopeDeals prizes means one of the following:

(1) All the good prizes have been won already

I’m not sold on the value of the ChopeDeals codes (given their high minimum spend), but I do fancy the Chope$. A 300 Chope$ code, stacked with my LiveUp and Chope Gold status, would net me a hefty 650 Chope$ per reservation, enough for a $10 dining voucher (and just 50 Chope$ shy of $20). Two such reservations and I’d have enough for 1,000 KrisFlyer miles.

The problem is, all the codes need to be used by 31 July. Even if I dined out every meal of the day, it’d take more than a year to exhaust all my Chope$ codes. 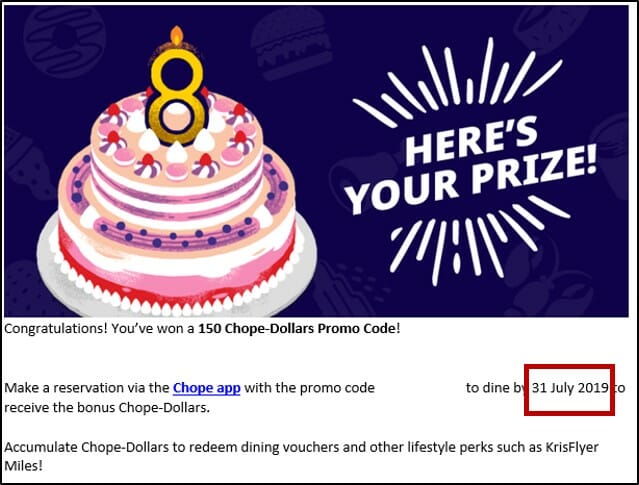 It’s a nice problem to have, but I’m now stuck with a few thousand codes I’ll never use. My first instinct is to post them up for anyone to use on a first-come-first-serve basis, but I make the mistake of asking for permission rather than forgiveness by sending a quick email to Chope.

The Chope representative politely declines my request, and shortly after, this line appears in the T&Cs. 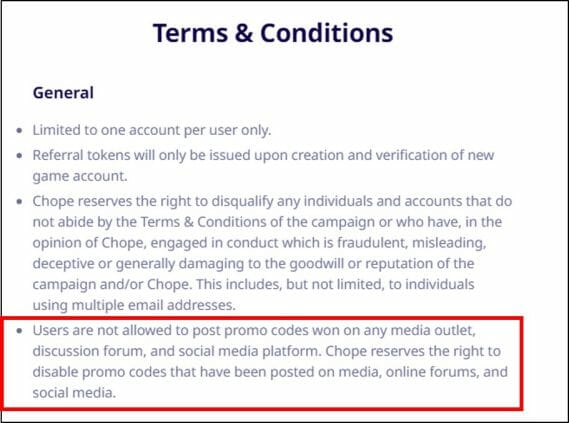 That’s kind of a bummer, but I suppose if someone urgently needed a Chope code and sent me a message, sending one via email wouldn’t contravene anything…

The last thing to do is head down to Chope’s office on the top floor of Shaw Tower to collect my $100 dining voucher. 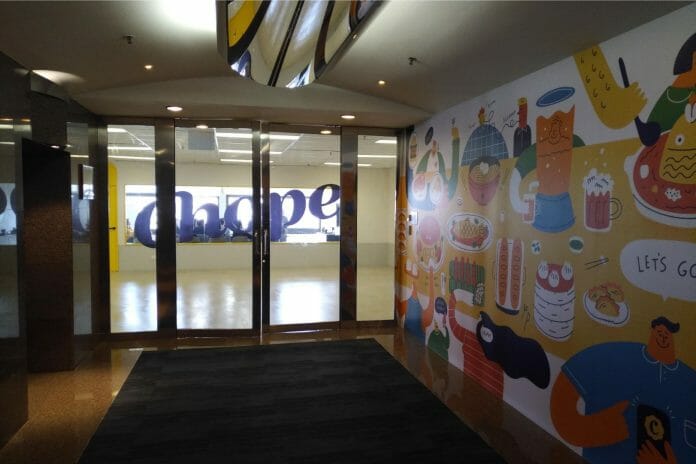 Chope’s office is pretty much standard-issue startup decor: bright, communal working spaces, colorful armchairs, a foosball table, and the distinct sense that everyone here will either be incredibly wealthy or totally broke in five years. 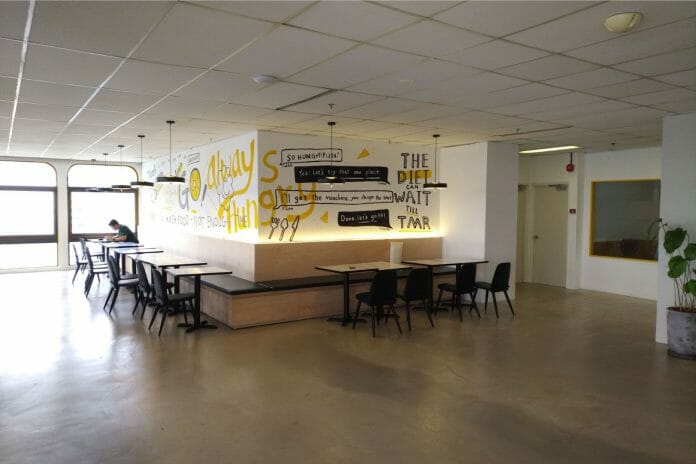 There’s no receptionist, but I manage to flag a passing Chope employee who finds someone to assist me. She asks if I have a minute to talk, and shows me to a small room.

“This is it,” I think. “They’ve taken exception to my use of macros and I’m not leaving this building alive. They’re gonna Titus Andronicus me and send my remains to one of their less-preferred restaurants.” 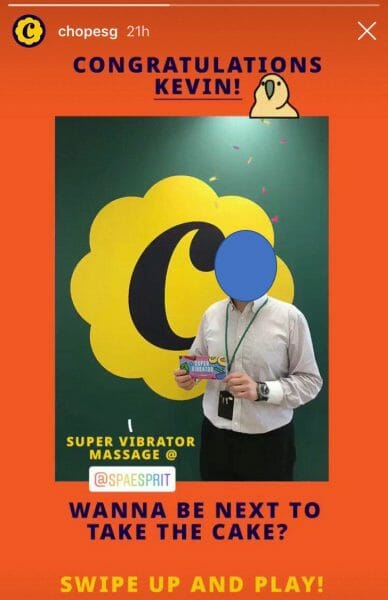 Although I think that being on Instagram is somewhat worse than what happened to Chiron and Demetrius, I’m very bad at saying no. So we shoot a brief interview and after that, I’m handed a printout to sign for my gift (I notice there are quite a few names on it, suggesting that other people did indeed get lucky). 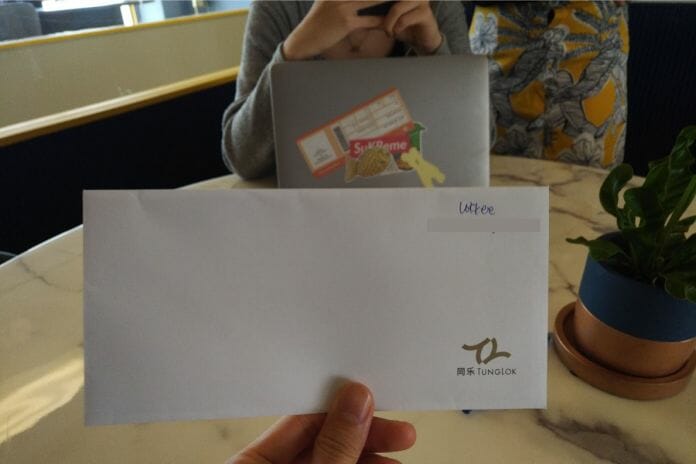 Before I leave, they mention that additional prizes will be added to the pool next week. So if you’re hoarding your tokens, you might want to keep your powder dry for now.

Aaron Wong
Aaron founded The Milelion to help people travel better for less and impress chiobu. He was 50% successful.
Previous articleMilelion Weekly Deal Summary [14-21 Jun 19]
Next articleLiveUp changes coming 1 July: Is it worth keeping your membership?

You sir are a champion

i loled the entire way. You should write a book.

What a fun read. It’s super hilarious as usual!

You need to do a TED Talk on this. Like what that guy James Veitch did with his spam email reverse-scamming adventures.

Double thumbs up for the ingenuity and humour.

This reminds me of the McDonalds monopoly game. What I believe is that typically, the top prizes (aka the cake), are usually withheld from the pool to continue building hype and will only be released near the end of the campaign. Secondary prizes will be trickled out throughout the campaign period.

After all, it’ll be such a bummer if the top prize was won on the first day, no? It’s statistically possible, so the odds are deliberately changed by the campaign owner (to 0%).

Carpal Tunnel & Banished to the couch is the worst possible combo. You always want your wrist to be working fine when being exiled from the bedroom.

Functional wrists are very important. How else will I type?

I laugh so hard at this part:

““This is it,” I think. “They’ve taken exception to my use of macros and I’m not leaving this building alive. They’re gonna Titus Andronicus me and send my remains to one of their less-preferred restaurants.”

I’m about ready to abseil down the side of the building with my socks and boxers when she returns with a colleague.”

How did you request for the upgrade?

I didn’t, it was given to me automatically.

What offerings of sacrifice have you given to the Upgrade Gods? (Did you go Titus Andronicus on Aaron? Was that the secret to getting good upgrades automatically?)

I think the secret is not to reveal too many secrets else the rest of us might start losing out on such upgrades. 🙂 For starters try becoming a Solitaire member – you can lots of hidden perks!

Big fan! What an awesome automation!!

Hello you can space out your macro to run every 30 secs / 1 min! So far when I spin consecutively, I yield the same prize two in a row sometimes!

my macro has stopped working unfortunately 🙁 I need to play around with imacros because the event recorder is not working right now.