All you need to know about GrabReward’s latest changes

Grab has been teasing some new GrabRewards features for the past few weeks, and it’s finally taken the wraps off today. 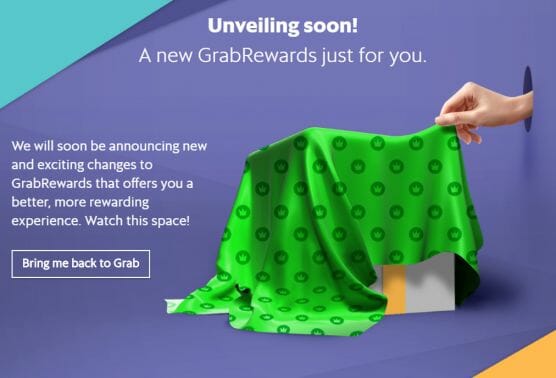 With these changes, there are now more ways to keep, use, and earn GrabRewards points. Here’s the highlights:

Let’s look at each of these more closely.

As I wrote last year, I much prefer an activity-based expiry policy over a time-based one because it makes so much more sense. The company benefits from greater engagement (there’s more incentive for customers to regularly earn points if doing so can extend the life of their entire balance), and customers benefit from greater control over their points plus the ability to save up for aspirational awards.

With the new GrabRewards expiry policy, your points are effectively evergreen. Given the ubiquity of Grab rides and more than 15,000 GrabFood/GrabPay merchants in Singapore, it’s almost impossible to go six months without a single Grab transaction. Put it another way: anyone who doesn’t have a single transaction in a six month period is most likely a casual user who isn’t invested in the loyalty program at all.

The shift to activity-based points expiry also creates the possibility of saving up points for aspirational rewards, and in that respect the GrabRewards catalogue has been expanded with redemption options such as 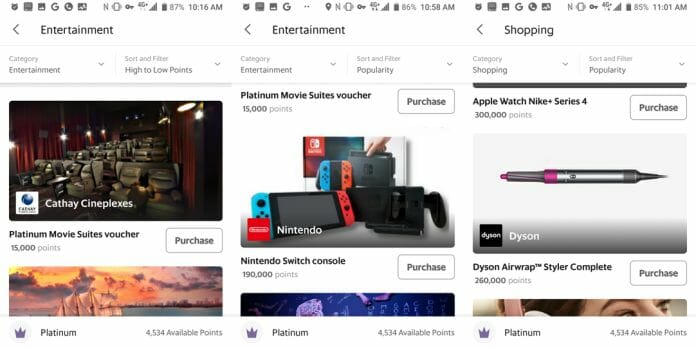 Naturally, these rewards will have a limited appeal. Many people may not see the point in saving up for a prolonged period to redeem a high value reward, and they’re free to continue redeeming points for smaller gifts like $5 Grab vouchers.

However, given that GrabPay is increasingly available at places with potential big ticket spending like electronics retailers (e.g Best Denki, Gain City), travel agencies, and private clinics, there’s a very real possibility that some users may find themselves with a sudden glut of points. I imagine it’s this group who the new rewards are targeted at. If nothing else, it’s simply more options to spend your points.

GrabRewards is giving an early peek into an interesting new feature called Challenges, a gamified rewards mechanic that awards users with points or vouchers for accomplishing certain tasks. 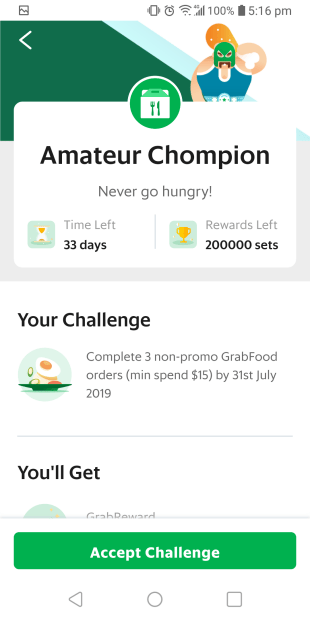 You’ll need to register to take part in a Challenge. Find it on the home screen, read the details, accept the challenge and you’re all set.

More Challenges will be rolled out in the weeks ahead with different rewards, covering other areas like transport, GrabPay and combinations of Grab services.

I think there’s good potential in this idea, especially when the rewards come in the form of points. Challenges are currently standard for all, but it’s not too difficult to envision personalized Challenges in the future similar to what IHG does with their Accelerate program.

A recap of GrabRewards tier benefits

It’s been a busy period for GrabRewards, with numerous benefits added over the past few months. To recap:

Although some of these benefits apply program-wide, the best value is still reserved for those with elite status. As a reminder, here’s how many points you need to earn to qualify for GrabReward’s elite tiers:

*Note that despite the changes to points validity, the GrabRewards elite qualifying period remains 1 Jan-30 Jun/ 1 Jul-31 Dec each year.

Based on the current earning rates and elite thresholds, here’s the minimum and maximum you’d need to spend in a six month period to hit each tier in GrabRewards.

*Assumes you pay with credit card or GrabPay

As Grab services and merchants become increasingly widespread, there’ll be progressively more avenues to attain elite status in the program. I’ve laid out a few scenarios below of how you could hit Grab Platinum in a six month (26 week) period

The real key to earning Platinum status quickly is by using GrabPay as often as possible, because it has the highest multiplier. Be on the lookout for GrabPay merchants (and stack with Fave to triple dip).

The latest changes enable GrabRewards members to keep their points active for longer, and allow those flush with points to cash them out for higher value options. The new Challenges feature is definitely one to watch, and I can imagine some pretty interesting Challenges around festive periods.

Be sure to open up the Grab app and check out these latest features.

Could GrabPay’s annual spending limit be increased to S$100,000?

omg those who use grab in malaysia are going to love this. RM1= 20 points with grabpay, that’s like S$1= 60 points. Spend about $3.2K and get a Nintendo Switch…

How about the spend in Thailand using Grab SG account ? I remember few years back the points I received were a lot per SGD1 spent !

i could be wrong but i believe tt malaysia is the most generous for grabrewards. they earn points like free over there.

love the non-expiring points, but the challenges feature seems underwhelming. i hope they’ve got more impressive deals lined up than that or the feature could be DOA

i’m still seeing it in my app…

Hi I have the same problem. The option to change to krisflyer miles disappeared after 1 July. (maybe cuz I redeem one last one on 30 June itself and it was still processing on 1 July). Did u manage to get it back? And if so, how? Also anyone know if privimiles 3 mpd top up has been extended beyond July?

from what i’ve gathered, some people don’t see the krisflyer miles option and some people do (I still do). I think it’s a glitch, but dont know when it will be fixed