GrabRewards cuts KrisFlyer miles prices in half for June

Ever since October 2017, GrabRewards points have been transferable to KrisFlyer. The regular transfer rate is:

For the month of June, GrabRewards is cutting the price for KrisFlyer miles in half. In other words: 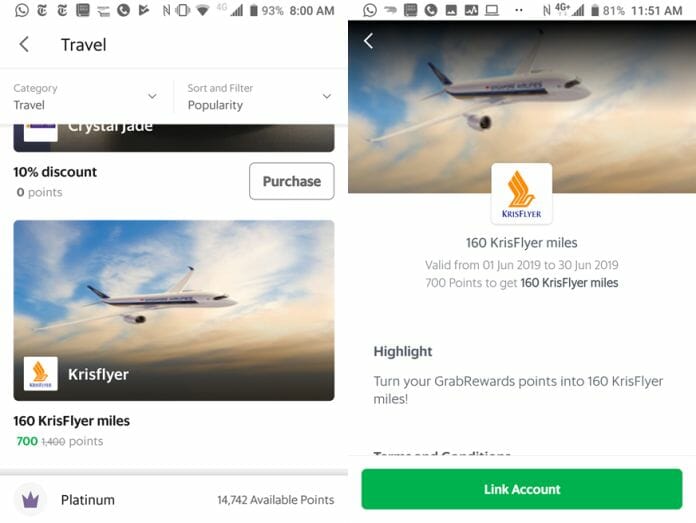 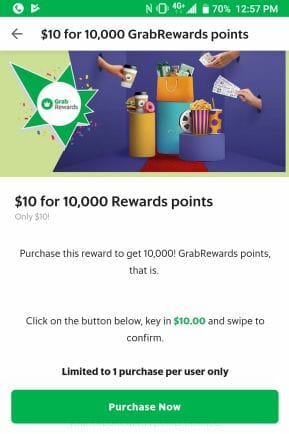 Assuming you managed to snag one of those packages (they’re all gone now), you’d have bought miles at 0.48 cents each (0.44 cents for Platinum). Granted, it’s low in absolute terms- just 2,080 miles (2,240 for Platinum), but it’s hard to argue with those prices.

What does this mean for my Grab transactions?

GrabRewards currently awards points according to the following charts: 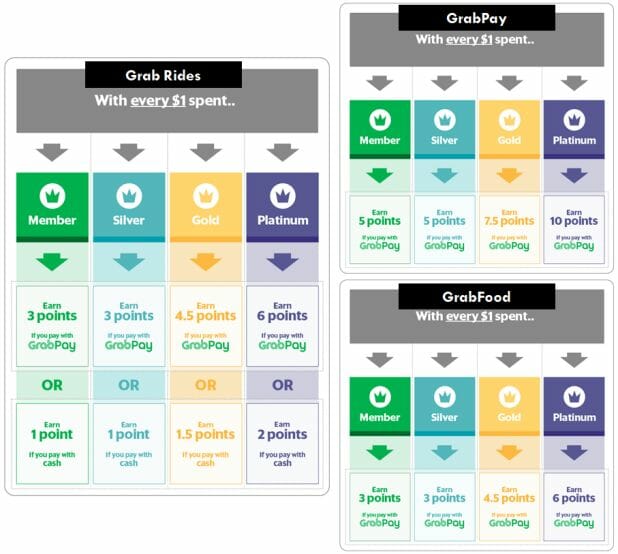 If you can’t be bothered to do the sums in your head, here’s the so-what for different Grab transactions, in terms of miles per dollar:

Considering the fact that certain cards still earn 10X for GrabPay top ups, you’re looking at mpd figures as high as 6.29 which is none too shabby, especially if you stack GrabPay with Fave.

The catch is that you can only redeem one “set” of miles at a time. After you redeem your GrabRewards points, the KrisFlyer miles option will disappear from the catalog and only reappear once the transaction goes through in a few day’s time. Given the promotion ends 30 June, this puts a limit on the number of transactions you can do.

Therefore, if you want to get in on this promotion, you should start transferring right away.

This is definitely a promotion you want to jump on, and given that GrabPay is pretty widely accepted now, it’s one that should help you give your miles balance a healthy boost. Just be sure to start those transfers asap.

How many times can you buy?

Made 1 purchase and it shows under MyRewards as Processing and can’t make further purchase. No option to buy multiple purchase in 1 go as well.

I managed to redeem 7 times, but all are shown under My Rewards. Seems like I am able continue to redeem.

You are lucky, I just able to make 2nd purchase a moment ago, by looking at the timeline, from place the GR to processed, estimate max 13-14 times of miles conversion, equivalent to 2240 KF miles 😂 until 30th June.

Any idea how to redeem the miles after that?

What do you mean? It goes to your krisflyer account.

Your $5 voucher on Lazada:

What’s best though is the higher denominations and the fact they send instantly, e.g. I am usually buying the minute I need a cab.

I managed to redeem 5 times last week, each time taking around 1-2 days to process. However, when I redeemed for the 6th time, it was stuck under My Rewards as Processing from last Friday (7 June) until now (13 June). I cannot redeem until the current one is processed. Does anyone have the same problem?

My redeem from last Friday is still under processing now too.

Ok. I found the cause.
There was an app update on 6 June, but there was no prompt from Google Play so I didn’t know and didn’t update. After I updated the app today, the redemption was finally processed.

Mine went through on krisflyer but stuck on the app .. sigh

Just a few days left, but looks like transactions are approved/processed by Grab around 11:30am each day and then you can re-enter another. Checked with 2 friends and its around the same time for them also. Can set an alarm at 12pm to enter a new transaction each day.

Now that promotion over, can’t seem to change points to miles at all (even at 1500pts to 160 miles). Anyone else has the same issue? And does anyone know if uob privimiles 3 miles / dollar top up will continue beyond end July?