An epic adventure filled with kimchi and tteokbokki.

Welcome to yet another trip report series! This trip was a crazy one and one which I have been waiting to embark on for some time.

Even though I was aware that Seoul appears on the KrisFlyer Spontaneous Escapes list almost every other month, I wanted to fly with Cathay Pacific just to get a feel of the product and service compared to what Singapore Airlines has to offer. Having flown Singapore Airlines Business Class several times, I decided to bite the bullet and take a gamble with Cathay Pacific – even with full knowledge that they are infamous with aircraft swaps.

Cathay Pacific is a member of the oneworld alliance and thus, you can redeem miles on Cathay Pacific through various frequent flyer programs. For me, most of my points reside in Citibank/UOB and thus the options were either Qantas Frequent Flyer program, Asia Miles, or British Airways Executive Club.

Having done my homework, I found that redeeming through British Airways Executive Club actually costs me 5,000 miles lesser as compared to redeeming directly through Asia Miles at the time when I booked my flights. Moreover, for some reason, Asia Miles was showing zero availability at that time when BAEC was showing me that several seats were available. However, British Airways devalued their partner awards chart recently and you can read more on that here.

My flight from Singapore to Seoul Incheon via Hong Kong cost me a grand total of just 40,000 Avios + S$122.50 in taxes. Pretty decent in my opinion. For the same itinerary now, you will need to fork out 44,000 Avios which is a 10% increase.

So my flights were:

Thankfully, the A330 that I was on was the A330 which is being used on medium-haul flights to Australia which means that Business Class seats are Cathay’s reverse herringbone style seats laid out in a 1-2-1 configuration. The Boeing 777-300ER on my flight to Hong Kong did not have First Class and instead only had a Business Class cabin.

For my return trip back to Singapore, I decided to go full retard. Man, I should not have gone full retard.

From Seoul, I decided that I would want to visit Tokyo for a night (read: 4 hours to enjoy Tokyo) and head back from there via Taipei. At the time of booking, EVA Air was scheduled to fly their new Boeing 787-9 Dreamliners between Tokyo Narita and Taipei Taoyuan as BR183 and I really wanted to experience it but sadly, there was a schedule change in late June which meant that my flight was instead operated by an…Airbus A321.

To get to Tokyo, I flew from Seoul Gimpo to Tokyo Haneda on ANA’s regionally configured Boeing 787-8 Dreamliner which had angled-flat beds in a 2-2-2 configuration. From Tokyo, I then flew with EVA Air to Taipei Taoyuan before literally running to catch my connecting flight back to Singapore. Because of the mad rush and the worry that I was going to miss my connecting flight, my pictures on the EVA Air flight might not be as awesome as the rest of the other reviews.

Anyway moving on, since I have not experienced Singapore Airlines old regional Business Class product, I thought it would be nice to check it out before they slowly disappear from the fleet. Hence, I booked myself on SQ879 to get back from Taipei.

The cost of the whole trip from Seoul to Singapore via Tokyo and Taipei? 47,000 KrisFlyer miles + S$79. 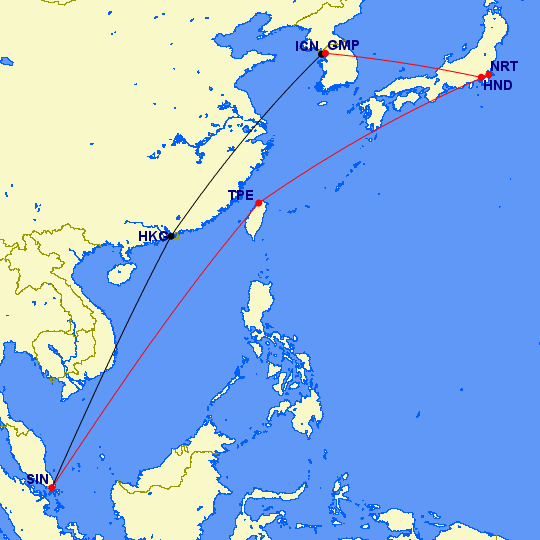 For my accommodation in Seoul and Tokyo, I decided to stick with the Hilton since I still have my Diamond status which I’ll be losing next year. As there’s also a double points promotion that’s running between now and end September 2019, this was a great way to rack up Hilton points as well.

The Conrad Seoul is a property that’s highly popular in Seoul even amongst the locals. I booked this hotel during the 50% flash sale which happened sometime back in March this year and snagged a Premium Room for 200,000 KRW which is a fantastic deal in my opinion. Upon arrival, I was further upgraded to a Grand Corner Suite which was massive.

Before the Conrad Seoul, since I had some expiring Accor points, I decided to redeem them to offset the cost of a night in Myeongdong and settled for the Ibis Styles Ambassador Seoul Myeongdong which was located 5 minutes away from the shopping streets of Myeongdong.

I had originally booked The Shilla Seoul for my last night in Seoul through the Visa Luxury Hotels Collection program. However, I had a last-minute change of plans and switched to the Millennium Seoul Hilton as this hotel is located very close to Seoul station which made my trip to the airport much more convenient. I had booked a normal Twin Room but managed to ask for an upgrade to an Executive 1 King Bed Suite for my stay.

For my one-night stopover in Tokyo, I chose the Hilton Tokyo which is located in the Shinjuku area of Tokyo. Revenue rates at this hotel were upwards of S$500 a night during the weekend that I was there so I used 60,000 Hilton Honors points to redeem a night there. Sadly, there was a quiet devaluation recently and the Hilton Tokyo now costs 70,000 Hilton Honors points for a Standard Room redemption.

As the hotel was running close to full capacity, my luck ran out for this stay at the Hilton Tokyo and I only received an upgrade to a Premium King room from a Deluxe King room.

For this trip report series, I will only be reviewing the Cathay Pacific lounge in Changi’s T4, the Asiana Airlines Business Lounge in Seoul Gimpo, ANA’s lounge in Narita as well as the United Club in Tokyo Narita. Due to the late arrival of my flight from Tokyo to Taipei, I did not get the chance to visit the EVA Air lounges and instead was treated to a cross airport cardio session as I was escorted to my connecting flight by foot.

Stay tuned for the first review coming up real soon!

Matthew Chong
Addicted to luxury travel while trying not to go broke, Matthew is always on the prowl for the best deals in the travel industry. When he's not busy studying, he can be found trawling the internet and reading up on credit cards, airlines and hotels. He also wouldn't mind taking you out on a date.
Previous articleMilelion Weekly Deal Summary [16-23 Aug 19]
Next articleHow does the Citi Prestige’s “relationship bonus” work?

Re your impending status dropping at Hilton.. Given the recent change and much much tougher Challenge to hit, you may want to consider stretching to keep your Diamond status by spending enough (12,000 Base Points) to maintain..? Cos also, unlike Marriott, where ONLY room nights count towards status, this to me is a great ‘cheat’.. it works out to USD12k spend..

Ahh… sorry… or.. find family and friends who are coming to SG, book them into hotel here in you name.. they’ll get min 2x daily bfast free, if lucky, potential suite upgrade.. F&B spend counts too.. 😇

Millennium Hilton Seoul have airport bus right to the lobby. No need even bang my head to bring luggage and walk to Seoul Station. Plus, location is on a hill. Good luck with exercise 😉

Ha. I climbed up the hill because I didnt know the shuttle was from the Arex side. It was pure agony. Legs day secured for that day

how long did u stay in tokyo in total? i assume the 4 hours is excluding time spent in the hotel.

How did you acquire Diamond initially?

Me too ! Have been Gold vis Visa Plat for a while. Always wonder how to get Diamond …

Hello! Just curious – how did you book your return trip from Seoul to Singapore via Tokyo and Taipei for 47,000 KrisFlyer miles + S$79?

Is this the right chart to look? https://www.singaporeair.com/pdf/ppsclub_krisflyer/charts/StarAlliance_RoundTrip.pdf

Yup. I booked it before the Star Alliance award chart got devalued earlier this year.

Matthew, can share how you get 2 stop overs on partner airlines with 0 cost? I must be missing something.

I didn’t do a stopover, my connecting flights were within 24 hours of each other

Asia Miles imposes married segment logic on redemptions, whereas BA does not… hence the discrepancy I think.