UOB has five different Visa Infinite cards, but are any of them worth getting?

Back in September 2003, UOB launched the UOB Visa Infinite, Singapore’s first-ever Visa Infinite card. The Straits Times called it “an exceedingly exclusive card for the mega-rich,” and with a S$350,000 annual income requirement, you could forgive them the hyperbole. After all, this was a product meant for the top 0.1% in Singapore. Fast forward 16 years, and it’s hard to argue that a Visa Infinite still holds the same kind of prestige, given you can get one with an annual income of “just” S$80,000. Heck, you can even get a no-fee Visa Infinite just by pledging a fixed deposit collateral of S$50,000.

Although the Visa Infinite’s exclusivity may have waned a bit, one thing’s for sure- no one issues them like UOB.

The sheer variety often leads to some confusion, even among the bank’s CSOs. So what exactly is the difference between all these cards?

All five cards have hefty annual fees (some more than others), and generally require you to earn at least S$150,000 a year or have a Privilege Banking relationship with UOB (min AUM: S$350,000).

Annual fee waivers? Dream on…unless you’re holding the UOB Privilege Banking Visa Infinite with a minimum of S$350,000 AUM. In that case, your annual fee will be waived in perpetuity.

To be fair, the 1.6/2.4 mpd on local/overseas spend offered on the UOB Reserve/Diamond Reserve is one of the highest in the market. However, if you don’t qualify for this card, you’re looking at significantly lower rates on the rest of the Visa Infinite cards.

The UOB Visa Infinite Metal Card, for example, earns 1.4 mpd on local spend but only 2 mpd on overseas spend. The UOB Privilege Banking and UOB Visa Infinite cards are much worse. Despite their four-figure annual fees, you’ll only earn 1.2/2.0 mpd on local/overseas spending, which is more in line with mass market cards like the DBS Altitude or Citi PremierMiles Visa.

As if that wasn’t bad enough, that overseas earn rate of 2 mpd is limited to dining and shopping, defined by the following MCCs:

There is also a cap on the 2 mpd of S$10K per month, after which you’ll earn just 1.2 mpd. This is pretty hard to swallow when entry-level cards are offering 2 mpd uncapped on overseas spending.

All UOB Visa Infinite cards earn 2 mpd on luxury merchants like Audemars Piguet, Bottega Veneta, Burberry, Cartier, Dolce & Gabbana, Fendi, Hugo Boss, Louis Vuitton and many other chi chi places. However, you could do better at some of these merchants with the AMEX Platinum Charge, which earns 7.8 mpd at Breitling, Hublot, IWC and other Platinum EXTRA merchants.

All of UOB’s Visa Infinite cards carry hefty annual fees, but to soften the blow, UNI$ are awarded upon payment. Here’s how many miles you get with each card when you pay the annual fee.

All these cents per mile figures are way above our accepted valuation of 1.8 cents each, but it’s important to highlight that you can’t think about these cards from a pure miles-buying angle. After all, they come with other benefits which may help to justify the annual fee. We’ll explore some of these benefits in the next two sections.

Airport lounge and transfer benefits are fairly standard for high-end credit cards, but unfortunately this is an area where UOB’s Visa Infinite cards disappoint the most.

Only the UOB Reserve/Diamond Reserve cards have an unlimited-visit Priority Pass, and even then, just for one person. When you consider that the much cheaper Citi Prestige offers unlimited visits with one guest, and the HSBC Visa Infinite issues an unlimited Priority Pass to both principal and supplementary cardholder, this is extremely underwhelming.

The picture is even worse for airport transfers. You’d think that a card like the UOB Reserve would roll out the red carpet for its ultra rich clients, but free airport limo transfers are limited to one per quarter, and only when a minimum of S$2,000 is spent on hotel/airfares! The rest of UOB’s Visa Infinite cards offer complimentary airport transfers only when you spend at least S$5,000 on travel packages with UOB Concierge Travel. 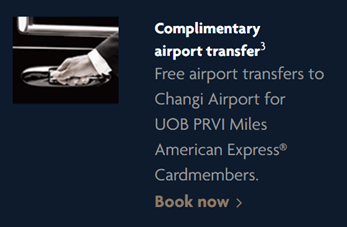 It’s kind of ironic that the entry-level UOB PRVI Miles AMEX offers a much better airport limo benefit than UOB’s “premium” cards- by spending S$1,000 overseas in a quarter, you get one complimentary limo ride, up to a maximum of two per quarter.

These perks are enjoyed in the first year of Diamond card membership, but in subsequent years require a further S$1M spending (!) to enjoy.

The complimentary 2nd night hotel stay sounds attractive at first, until you realise that the value of the free night is capped at S$400 and you can only use the benefit once a quarter. The Citi ULTIMA has a similar benefit, but allows up to two complimentary nights per outward journey. This means you could get many more free nights out of the ULTIMA (and not have to spend S$1M for the privilege of doing so).

The UOB Reserve card doesn’t enjoy those perks, but cardholders do get a complimentary International Associate Clubs membership, which lets them use selected private clubs outside of Singapore. They’ll also enjoy an upgrade to Grab Platinum (which expires on 30 Sept 2019), and a bonus of 100,000 miles when they spend at least S$250,000 on their card in a membership year.

Unfortunately, UOB Visa Infinite cards no longer have access to The Tower Club and China Club, so if those were perks that you valued you’re going to have to find them elsewhere (e.g. AMEX Platinum Charge or OCBC VOYAGE). They do, however, offer complimentary weekday green fees at Sentosa Golf Club, provided you bring one fee-paying guest.

Given their relatively high cost and modest benefits, none of UOB’s Visa Infinite cards particularly appeal to me.

If I wanted a card at the $120-150K range, I’d much sooner settle for one that gives me unlimited lounge access and complimentary limo transfers, like the Citi Prestige, HSBC Visa Infinite or OCBC VOYAGE, than the UOB Visa Infinite Metal.

If I ever qualified for a card at the $500K mark, I’d sooner look at the Citi ULTIMA than the UOB Reserve. The ULTIMA costs 8% more but gives 50% additional miles with the annual fee, a wider range of transfer partners, three unlimited Priority Pass cards and a complimentary second night at selected hotels.

My general advice for UOB cards? Stick to the entry-level ones: I’d recommend the UOB Preferred Platinum Visa, the UOB PRVI Miles, the UOB Lady’s Card and the UOB Visa Signature to pretty much anyone. Once you move up the tiers, however, you’re better off looking elsewhere.

These cards just feed your ego and make you feel good about yourself when you open your wallet.

Some shallow minded people will think people actually look inside your bi-fold to see what cards you have. Yes, perhaps if you’re out with like minded people.

Other than that, why would you ever use a lower mile reward card at each occasion.

It’s like bringing your own fancy bowl to buy economy rice. why bother?

These metal cards are magic. They make your wallet lighter while making it heavier.

you win the internet. +1 milecoin for you.

I have the classic UOB Visa Infinite card but don’t pay the annual fee due to the AUM I have with the bank. I actually don’t use the card and only hold it because transfer of UNI$ to miles (accrued from my spending with other UOB cards) is free if done through the VI card.

yeah, that’s pretty clever since they waive the AF anyway. any unpublished benefits you’ve been getting?

How do you do this?

Uob points pool- if you’ve one card that doesn’t impose fees for xfer, all your points can be xfer for free

These cards do make the Amex Plat Charge a bargain.

Can you use the UOB PRVI Miles card to get free transfer of UNI$ to miles?