Cathay Pacific's A330s, an awesome experience if you get the ones with the lie-flat seat.

After hopping from lounge to lounge in Hong Kong, it was finally time for the connecting flight to Seoul Incheon. This flight was a red-eye flight which arrives into Seoul Incheon at around 6am which unfortunately meant that I was a zombie upon landing in Seoul due to the lack of sleep. Yes, this lad needs his 7 hours of uninterrupted rest.

Boarding started on time and I was super tired from clocking more than 10,000 steps in HKIA itself. Lounge hopping is tiring business. Once boarding was called for Business Class passengers, I quickly made my way into the aircraft and to my seat, 12A. Waiting at the seat was a skinny pillow and a thin blanket. No amenity kits were provided for the short hop to Seoul.

When I first booked this flight, the aircraft that was supposed to be operating the flight was the Airbus A350-900 which I was pretty excited to try. Sadly, luck was not on my side and the aircraft got swapped to an Airbus A330. I was extremely thankful that it was the Airbus A330-300 which had the lie-flat seats installed. These seats are the exact same ones that can be found on Cathay Pacific’s Boeing 777-300ER, Airbus A350-900, and Airbus A350-1000 aircraft. (well, the ones on the A359 and A351 are slightly different but it’s still very very similar)

They are, however, slightly narrower than their brethren in the B77W and A350s due to the smaller cabin width of the A330. I was still able to fit snugly in these seats so I guess the majority of you readers shouldn’t have an issue. 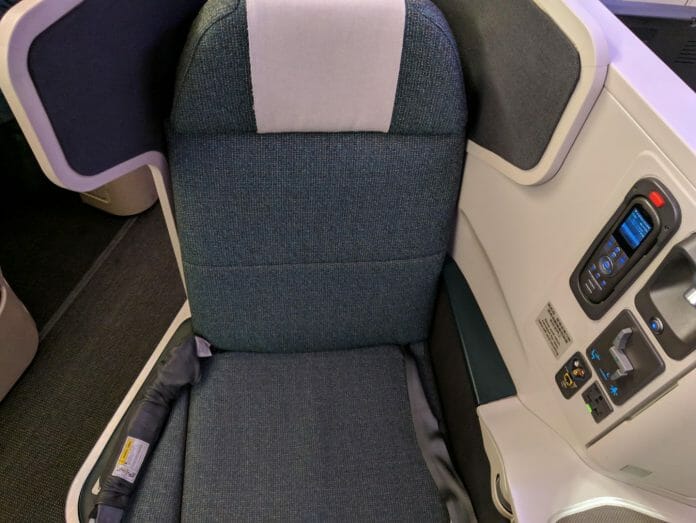 Legroom is generous and I was able to lie straight to sleep with no issues. 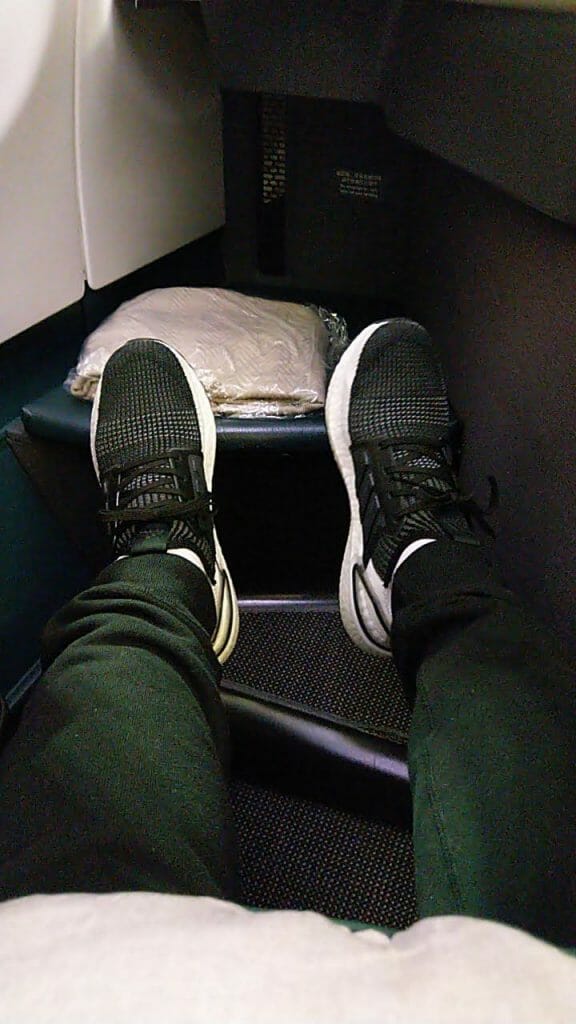 The entertainment and seat controls were located on the same panel and inside the tiny cabinet was the headphones. You might have noticed that the small cabinet is almost half the size of that on the B77W. Yes, I had water as my pre-departure beverage cause I’m not an alcoholic. 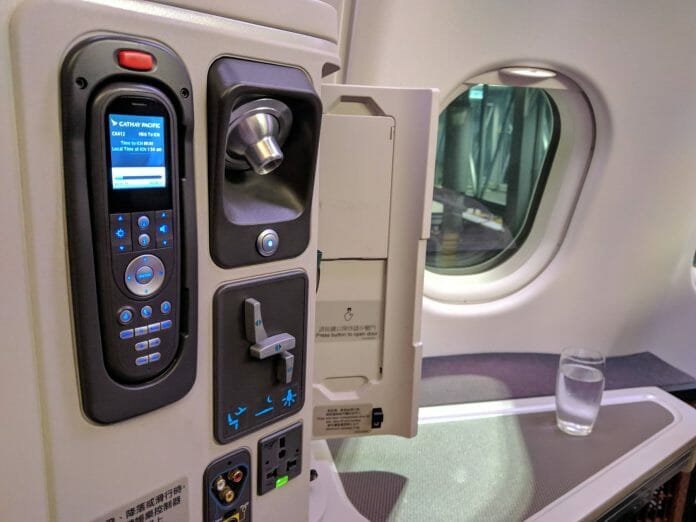 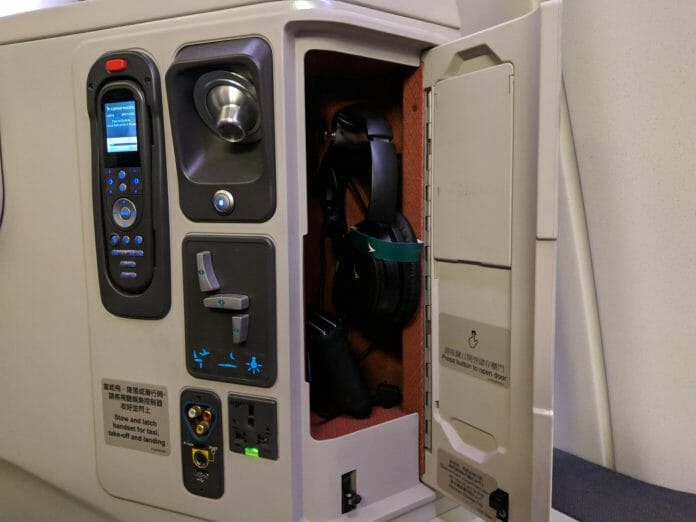 The in-flight entertainment screen was similar to that on the B77Ws. 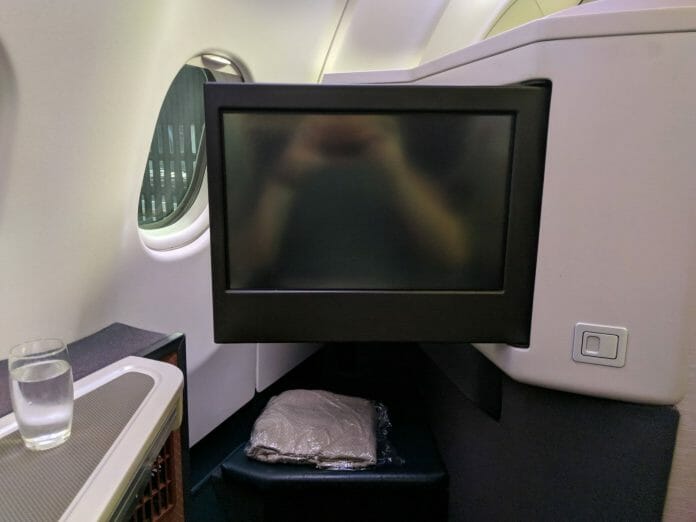 Side storage was available as well with the literature pocket located at the front of the seat just next to the aisle. 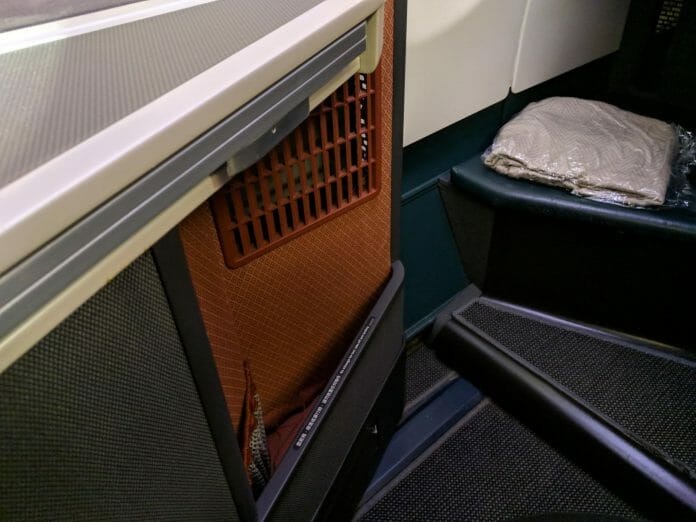 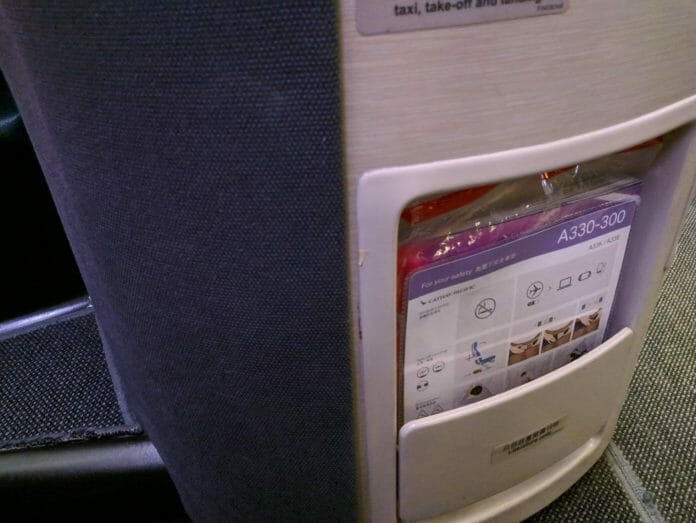 Again, there was a tiny cabinet located beside the aisle where you could store your shoes in. 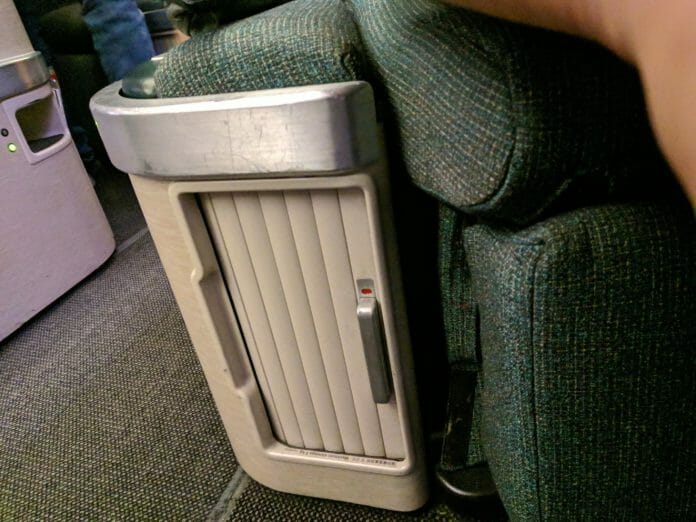 As mentioned earlier, I was dead tired when I boarded the plane and thus decided to skip the supper service which didn’t look great at all. Here’s the menu: 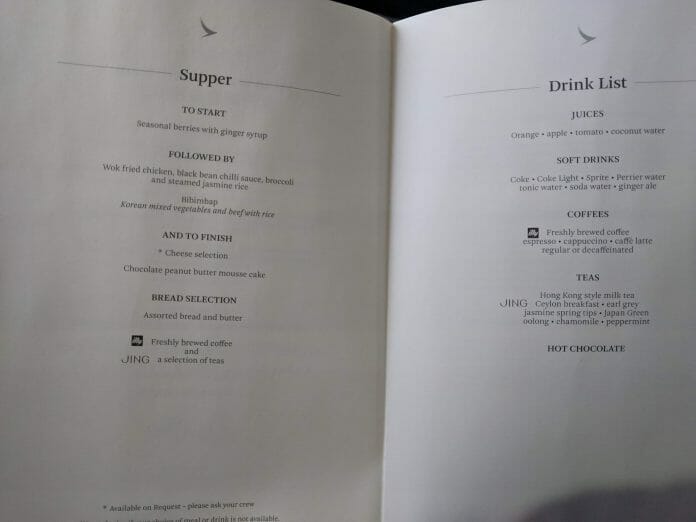 Immediately after take-off, I set my bed to the lie-flat position and went to sleep. Waking up somewhere over Daejeon. I ordered a cappuccino and it was pretty decent. Again, I was very thankful that the cabin crew on Cathay Pacific did not prepare the cabin for landing a full 30 minutes prior to arrival. 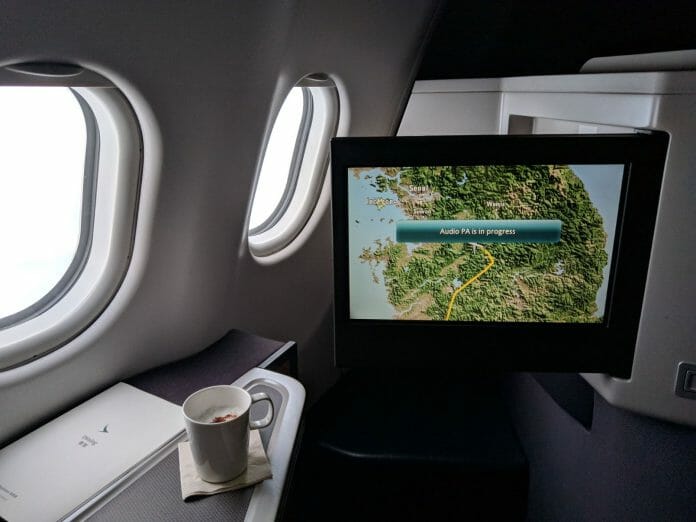 If you’re fortunate to snag an Airbus A330 which features the lie-flat seats then your ride to your final destination will not be a bad one. These seats although narrower, are still a huge step-up from the recliner seats which can also be found on their A330s.

This wraps up the reviews for my flights with Cathay Pacific. Tune in next time for a detailed (i hope) review of the Ibis Styles Ambassador Myeongdong!

Matthew Chong
Addicted to luxury travel while trying not to go broke, Matthew is always on the prowl for the best deals in the travel industry. When he's not busy studying, he can be found trawling the internet and reading up on credit cards, airlines and hotels. He also wouldn't mind taking you out on a date.
Previous articleWhat’s the difference between UOB’s five Visa Infinite cards?
Next articleNeither here nor there: the future of the AMEX Platinum Reserve

Deal: Buy LifeMiles with a 125% bonus & receive 10% rebate on next award booking

Must be gutted to miss the on-board meal 🙁

Definitely. I didn’t make my miles worth.

I think the A350 was a missed opportunity for CX to make some bigger changes to their cabins instead of just a ‘refresh’. The refreshed version of these A330/777 seats is not going to be competitive in a couple of years. CX J is no hardship, but it feels a bit like they are just phoning it in at this point – nowhere near as aspirational as they used to be.

Matthew
Reply to  Some fool

Don’t fix what’s not broken? Haha but yeah jokes aside, I really look forward to what they’re going to introduce on the 777-9s in the future. The current seat is good, but not great.