But beyond that, the analogy breaks down. While it’s possible to convert S$1 into its HKD equivalent, I can’t do the same with KrisFlyer miles and Asia Miles. Traditionally speaking, loyalty points are a captive currency with little to no exchangeability.

That’s something OCBC is looking to address with STACK, a multi-partner loyalty platform that lets you track, exchange, and redeem points across programs. STACK launched in September 2019, and consists of two main features: Marketplace, and Points Exchange.

Marketplace offers deals like $2 for a $5 Grab voucher, or $3 for a $6 RedMart voucher. Points Exchange allows you to convert one loyalty currency to another.

We’ll talk about the deals in a bit, but let’s first dive into Points Exchange, arguably the more unique feature.

How does Points Exchange work?

Currently, six loyalty currencies are available for exchange on STACK- all four of OCBC’s, plus Great Eastern’s (UPGREAT) and Millennium Hotels’ (My Points).

To convert points, simply select the “from” and “to” currencies. STACK then tells you how many points you’ll get, net of a conversion fee (see below). 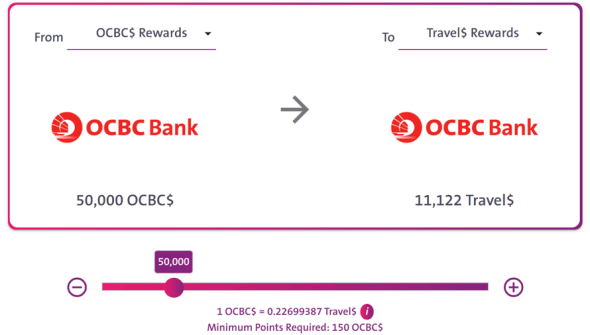 What fees are involved?

Points exchanges are not completely frictionless- 2% of the currency you’re transferring from will be charged as an admin fee, with a minimum and maximum fee applicable.

For example, a minimum and maximum fee of 135 and 2,702 respectively applies when transferring OCBC$ into Travel$. Three possible scenarios are illustrated below:

Here’s a summary of the minimum and maximum fees applicable, by currency.

What are the conversion rates?

Whether or not STACK’s Points Exchange feature makes sense ultimately boils down to the conversion rates.

Here’s what they look like across currencies; I’ve ignored conversion fees, which in any case are less consequential the more points you convert.

That’s a lot of numbers to take in, so let’s focus on the more common scenarios people may be thinking of.

On the surface, it’s quite obvious why you’d rather have Travel$ than OCBC$:

The conversion rate, however, negates the advantages. 1 OCBC$= 0.227 Travel$, which is the equivalent of trading 0.4 miles for 0.22 miles, or taking a haircut of more than 40% (and that’s not even counting the admin fee)! There’s simply no reason why you’d take that trade.

In the same way, it’s obvious why you’d rather have VOYAGE Miles than OCBC$:

Again, the conversion rate erodes the gains. 1 OCBC$= 0.213 VOYAGE Miles, an even lower rate than Travel$.

Even if you earned your OCBC$ exclusively through 10X categories on the OCBC Titanium Rewards (10 OCBC$ per $1), you’d be earning the equivalent of 2.13 VOYAGE miles per dollar- still inferior to the VOYAGE’s foreign currency earn rate (2.4 mpd until 31 Dec 19, 2.3 after). It might make sense if you had a lot of local shopping to do and really liked VOYAGE miles, but otherwise it’s a bit of a stretch.

You take a small haircut when converting Travel$ to VOYAGE Miles, but this may be worth it if you’re using your OCBC 90N card on 4 and 8 mpd categories.

The highest earning rate you can currently muster on the OCBC VOYAGE card is 2.4 mpd on foreign currency spending (2.3 after 31 Dec 19). If you really wanted to build your stash of VOYAGE miles, you could spend on eligible 4/8 mpd categories using the OCBC 90N, and convert the Travel$ into VOYAGE miles.

This would let you earn the equivalent of 3.75/7.5 VOYAGE miles per $1, which I’d argue is a good deal, given how valuable VOYAGE miles are.

UPGREAT isn’t a particularly well-known rewards program (and has one of the most convoluted earning mechanisms I’ve ever seen- you earn XP to exchange for stars to exchange for UPGREAT points), but it does have KrisFlyer as a partner.

1,000 UPGREAT points can be converted into 330 KrisFlyer miles, so are there any potential arbitrage opportunities?

On the other hand, converting your UPGREAT points into VOYAGE Miles or Travel$ makes sense.

Instead of taking a 0.33 miles per UPGREAT point, you can almost double this to 0.613 miles by converting to Travel$.

In other words, UPGREAT members who hold the OCBC 90N or VOYAGE cards should not convert their points through UPGREAT; they should instead transfer them into OCBC rewards currencies and then convert.

Maybe: OCBC$/Travel$/VOYAGE Miles to My Points

Millennium Hotels and Resorts isn’t one of the bigger hotel chains out there, with a footprint of just 130 properties. It does have its own loyalty program, however, where points are worth 0.68 Singapore cents each when redeemed against hotel stays.

Pop that into our equation and we have…

The value is extremely marginal, but given how hard it is to earn hotel points in Singapore, it may be an option for some people.

What about transfers into OCBC$?

As mentioned earlier, transfers into OCBC$ are currently not available. Even if that changes, I highly doubt the rate will be the inverse of the current rate, because that would yield the following:

Imagine converting 1 Travel$ into 4.4 OCBC$- that’s like trading 1 mile for 1.76 miles! That’s too good to be true, so unfortunately I think we’ll see different exchange rates into and out of OCBC$.

STACK’s marketplace carries an assortment of deals, some good, others meh. For example, you can pay $1 for a single scoop of Haagen Dazs ice cream, or $3 for a $10 Fairprice ON voucher, or $5 for a $10 Lazada voucher. 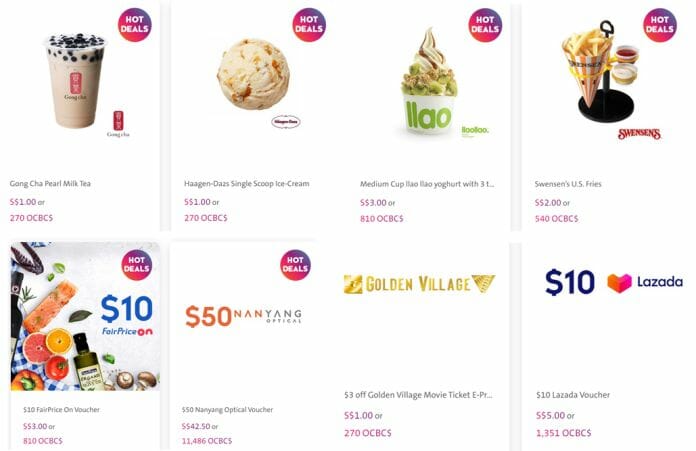 You could buy these deals with your rewards points, but the value is extremely poor. You’re much better off paying for them with cash.

Based on the current rates, the only points transfers that make sense to me are

It’s possible that rates may evolve and new opportunities open up, but as it stands the use cases are very limited.

STACK is useful insofar as it helps avoid orphan points, or leaving value on the table. For example, I may normally stay at hotels in the Hilton chain, but due to unforeseen circumstances end up at a Millennium hotel instead. Most people wouldn’t bother accruing the points as it’s just a once-off stay, but with STACK, I’m motivated to earn them so I can convert them into something I’d actually use.

So my take on STACK is that it’s an interesting idea, but not something you need to jump into just yet. Browse the deals if that interests you, and keep your eyes peeled for developments.

OCBC$ to Travel$ makes sense when you just have a few thousand left after conversion. OCBC is hard to get annual fee waiver and I think I am going to cancel it soon.

Oh yeah I guess in that case maybe. Thanks for the Robinson$ data point, will update in a bit

How about VM -> Travel? Wouldnt it make sense for any transfers to KF miles?

it’s an interesting thought. net of transfer fees you’d get maybe 5% more miles. the question is whether that really moves the needle, because the earn rates would be on par/inferior to the ocbc 90n

Well, as OCBC Premier customer I am getting 1.6mpd. For normal customers, there’s also 1.6mpd for dining only. For me that’s worth an edit of your post. Can make 105000 out of 100k miles for free.

I am thinking of the same approach as Talan. I use the VM card as my general spend card. Instead of transferring straight from VM to KF, I could convert from VM to Travel$ (i.e. get 6.5% more Travel$) before transferring to KF.

Does that make sense or have I miscalculated/ misinterpreted? Cheers

Is it more worth to change UPGREAT Points to miles or Robinson vouchers?

Would you first need the Voyage card to be able to convert your other currency points into voyage miles?