Alaska Airlines will join oneworld in 2021. What does it mean for us in Singapore?

Alaska's oneworld entrance will lead to more redemption opportunities (at least for oneworld), but may also mean some devaluations and fewer extra-alliance partnerships.

Hands up, who saw this coming?

Alaska Airlines has just announced that they will join the oneworld alliance as a full member by Summer 2021, becoming the alliance’s second member in the USA after American Airlines.

Here’s the timeline that Alaska has shared, which shows how they’ll progressively deepen their off-again, on-again partnership with American, before finally joining oneworld in 2021. 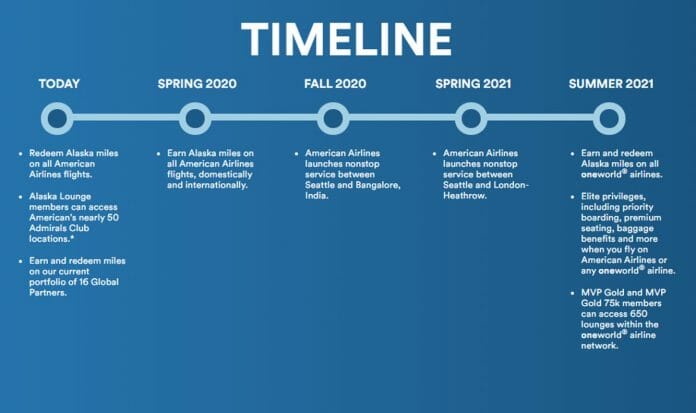 Some key landmarks include the ability to earn Alaska miles on all American flights (both domestic and international), and American’s launch of non-stop service from Seattle (Alaska’s home base) to Bangalore and London-Heathrow. Alaska elite members will also eventually enjoy full oneworld privileges, like lounge access and additional baggage allowances.

But none of that is likely to interest Singapore-based Mileage Plan members. After all, most of us aren’t flying on American Airlines (they don’t even serve SIN) or holding Alaska elite status (unless perhaps you credited those Cathay error fares to Mileage Plan).

So what does it mean for someone whose main interaction with Mileage Plan is buying miles when they go on sale, and perhaps crediting the odd Singapore Airlines flight?

Alaska Mileage Plan miles can currently be redeemed on 7 oneworld member carriers, under their existing bilateral agreements. This will expand to cover all oneworld airlines once Alaska joins, providing more redemption options for Mileage Plan members.

Moreover, it’s likely we’ll see the end of Alaska’s geographically-restricted routings. For example, Alaska Miles can currently be redeemed for Cathay Pacific flights between Hong Kong and Europe, but not Singapore and Europe.

Furthermore, Alaska’s current award routing rules limit you to a single partner when redeeming miles. For example, you can’t redeem a single SIN-HKG-LAX award with SIN-HKG on Cathay Pacific, and HKG-LAX on American Airlines.

Presumably, these restrictions will be removed once Alaska joins oneworld. This provides more flexibility and routing options for those of us based in Singapore.

A possible devaluation of the award chart

Once Alaska joins oneworld, they’re almost certain to consolidate their various partner charts into a single one. There’s been some concerns that a devaluation will happen in the process, and we’ll lose sweet spots like Singapore to Tokyo (25,000 miles on JAL Business) and Singapore to New York (70,000 miles on CX First).

While I think it’s likely we’ll see some price increases in the combined oneworld chart, I don’t think it’s a foregone conclusion that all the sweet spots will vanish.

After all, award chart arbitrage exists across all alliances. Take Singapore to London for example. The cost of this award can vary from 45,000 to 105,000 miles, a difference of more than 2X!

Or consider Singapore to San Francisco, where award costs range from 71,000 to 132,000 miles, also roughly a 2X difference.

In other words, it doesn’t follow that joining an alliance means harmonizing award redemption rates. If other oneworld FFP members, lured by the sweet spots in the Alaksa chart, start crediting flights en masse to Mileage Plan, it’s more likely we’ll see an adjustment on the accruals side instead. That’s bad for people who credit flights to Mileage Plan, but it doesn’t affect you if you only ever buy Alaska Miles.

On another note, award prices may remain the same, but there can be other non-price changes that effectively amount to devaluations. Will one-way awards price at 50% of round-trips? Will multi-carrier awards be available? Will stopovers be allowed? Will the chart change from zone to distance based?

Many questions, but no answers for now.

Non-oneworld partnerships may end, or be scaled down

One of the best features of Alaska Mileage Plan is their eclectic mix of redemption partners. This cuts across alliances, making Alaska Miles a kind of “multi-currency”, if you will.

As the table below shows, although the vast majority of Alaska’s partners are part of oneworld, they also have one SkyTeam, one Star Alliance and five unaffiliated partners.

Does Alaska joining oneworld mean that all extra-alliance partnerships will be terminated?

Not necessarily. First of all, there’s no reason why an airline can’t be part of one alliance while having a bilateral partnership with an airline from another alliance. We see this all the time- ANA members (Star Alliance) can redeem their miles for flights on Garuda (SkyTeam), and Asia Miles members (oneworld) can redeem their miles for flights on Air Canada, Air China, Austrian,  Air New Zealand, Lufthansa, Shenzhen Airlines and SWISS (all Star Alliance).

However, where these cross-alliance partnerships do exist, they’re usually restricted in scope. For example, Asia Miles can only be redeemed on Lufthansa flights within Germany, or between Hong Kong and Frankfurt/Munich. ANA miles can only be accrued when flying Garuda-operated codeshare routes.

Therefore, it’s likely we’ll see some of Alaska’s non-oneworld partnerships scaled down over the next 12 months. No one knows exactly what this entails yet, but my sense is the more closely a given non-oneworld partner competes with a oneworld member, the more likely that partnership is to end. In other words, Aer Lingus and Condor should be safe, but other agreements (like Singapore Airlines) may be on the chopping block.

Even if Alaska does nerf the Singapore Airlines partnership, it’s no big loss as far as redemptions are concerned. As I wrote previously, the Alaska award chart for Singapore Airlines doesn’t represent great value. In fact, unless you’re regularly crediting revenue Business Class tickets on Singapore Airlines to Mileage Plan, you’re better off spending your Alaska Miles elsewhere.

For what it’s worth, Alaska has stated explicitly that “agreements with our current valued Global Partners will continue uninterrupted”. I take that to mean “for now”, because it’s highly likely there’ll be changes afoot.

Alaska’s announcement that it will join oneworld has created more questions than answers, but tl;dr: nothing changes for now.

If your main interaction with Mileage Plan is during the miles sales, then you should know that the Alaska miles you’ve purchased will still be redeemable for sweet spots on Cathay Pacific and Japan Airlines. You’ll also continue to enjoy very generous accrual rates when crediting Singapore Airlines Business Class fares.

At the same time however, you should not speculatively purchase miles or credit them to Mileage Plan without a clear plan of how to burn them in the next 6 months. Joining an alliance involves a lot of work, and I imagine the immediate focus will be on areas other than the loyalty program. Beyond that we’re likely to see some changes, and not all of them will be positive.

I made MVP Gold last year with CX error fare and some mileage run. Sadly this is probably the last time I make MVP Gold after AS devalued QF cheap economy fare earning.

On the other topic, AS does not need SQ, but AS is important for SQ for US destinations, IMO. SQ and UA are not on good terms and AS is a valuable connecting partner for SQ, I think.

It’s an interesting qn who needs who more: SQ or AS. You’re right that ua and SQ hate each other’s guts, and the play for AS was to get more connecting international traffic- but if they’re really expanding the partnership with AA then AS’s problem is solved for. Sq on the other hand, will have to rely more on their JetBlue codeshare (is that still around)?