Singapore Airlines award space is now appearing on Mileage Plan...including the so-called "forbidden cabins". What does this mean for us in Singapore?

In August 2017, Singapore Airlines and Alaska Airlines announced a partnership that provided for codeshares plus reciprocal accruals and redemptions between KrisFlyer and Mileage Plan. 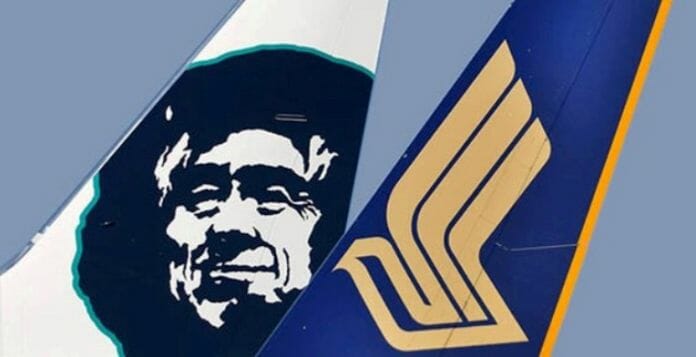 That’s now changed, and Singapore Airlines awards are showing up on Alaska’s website. 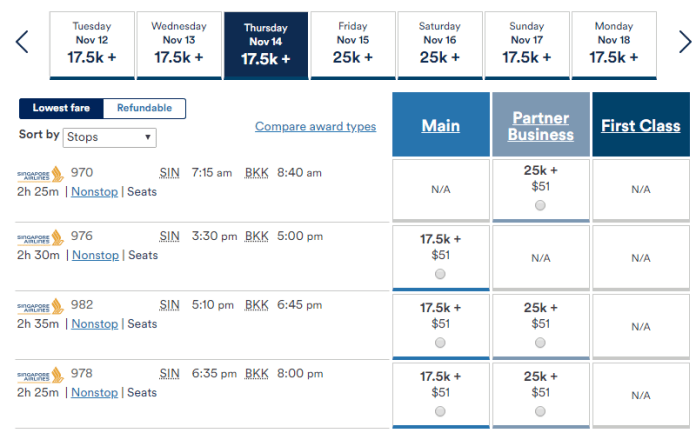 Premium Economy awards are not available (not that they’re good value redemptions anyway), and Mileage Plan award availability does not extend to SilkAir flights. Remember: SilkAir and Singapore Airlines are still two separate entities, and until SilkAir is merged into Singapore Airlines, the former’s award space will only be available to KrisFlyer members.

Singapore Airlines only opens a subset of its premium cabin award space to partners. This consists of older cabin products (like the 2006 Business Class or 2009 Regional Business Class) on specific aircraft, as summarized below. 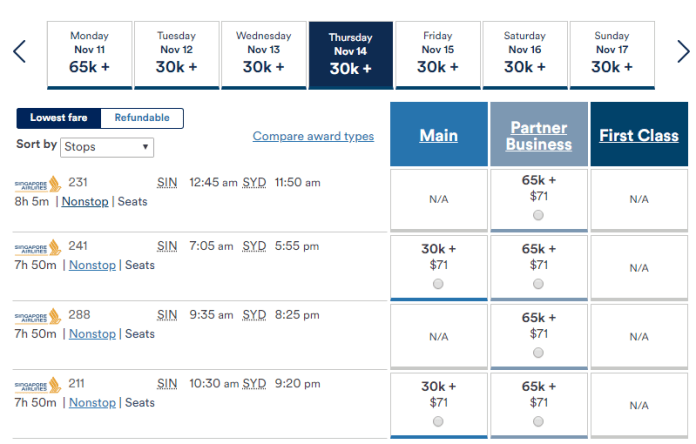 That same award space is not available to LifeMiles members.

I’m not sure if this is a bug or a feature, because in the past we have seen situations where “forbidden cabins” were made available to partners for brief periods before being pulled. It is possible that this space will disappear over the next few weeks, so we’ll have to see.

Assuming this is a permanent feature, it’s generally a bad thing for KrisFlyer users (but not entirely bad, see below) insofar as it means more competition for award seats from mile-printing Americans. Yes, KrisFlyer is already a transfer partner of Chase, American Express, Citi ThankYou and Capital One, but all things equal, someone in the US is more likely to have a ready stash of Alaska Mileage Plan miles than KrisFlyer.

Regarding (2), it’s a fair point to say that we can’t just look at outright cost of miles. After all, if Mileage Plan charged 10,000 miles from SIN-SFO and KrisFlyer charged 100,000 miles, then it’d still be worth it to buy Mileage Plan miles even if they cost two times of KrisFlyer.

So let’s look at how the pricing compares. Because of the differences between KrisFlyer and Mileage Plan’s region definitions, I’ve used specific cities for reference where needed.

As you can see, Singapore Airlines redemptions through Mileage Plan generally require more miles than through KrisFlyer, and where they’re lower, the higher acquisition cost of Mileage Plan miles more than offsets the difference.

For the purposes of the table above, I’ve used actual prices (i.e how the Mileage Plan website is pricing out) as opposed to the prices in the award chart. That’s because there are numerous instances where the actual pricing conflicts with the chart pricing.

For example, Singapore to Mumbai in one-way Business Class should cost 25,000 miles as per the chart, but actually prices at 65,000 miles.

Likewise, Singapore to Shanghai in one-way Business Class should cost 60,000 miles as per the chart, but actually prices at 25,000 miles. 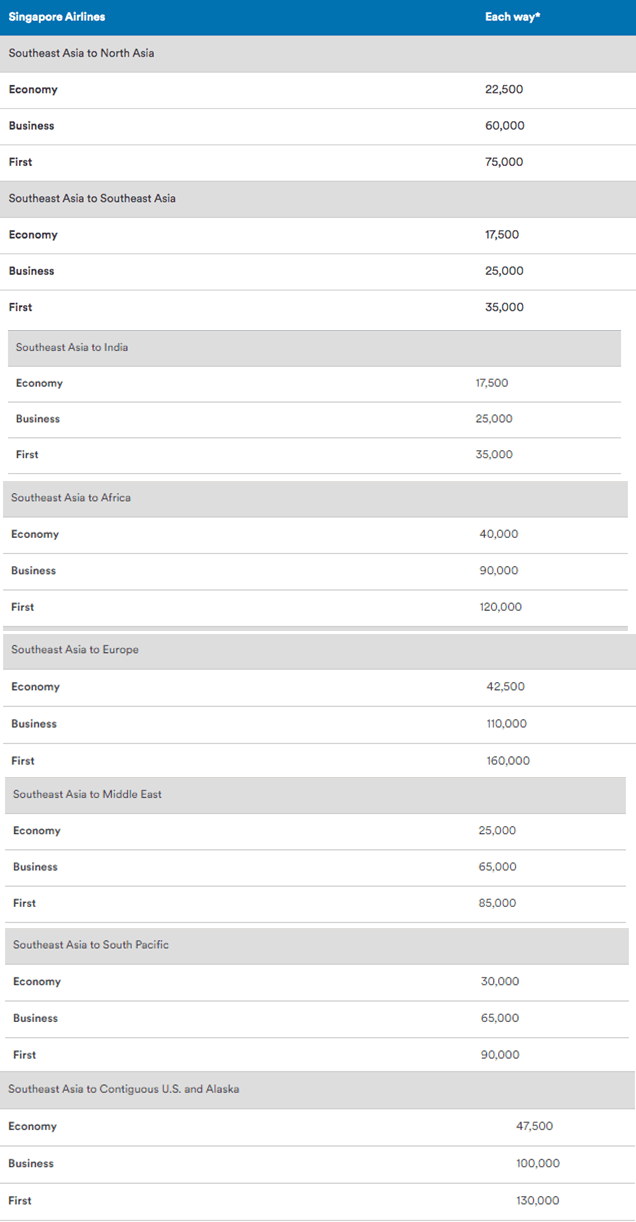 …unless the one-way trick applies

Mileage Plan aficionados will know very well the so called “one-way trick”, which allows them to redeem a virtual round trip between Singapore and Japan for just 25,000 miles.

This takes advantage of the fact that Mileage Plan allows a stopover on a one-way award, allowing you to spend up to a year in Japan before flying home.

Now that Singapore Airlines award space is available, the question is: can we do the same thing in reverse? The answer, thankfully, is yes.

Here’s an example of someone who takes one vacation to Shanghai and another to Tokyo. He redeems a separate one-way award to Shanghai, then on the way back, he redeems Shanghai to Tokyo with a stopover in Singapore (not unlike the traditional Singapore Airlines one-way trick, only that this particular routing wouldn’t be possible because it constitutes backtracking). This costs 60,000 Mileage Plan miles in Business Class, versus 86,000 KrisFlyer miles for redeeming separate tickets. 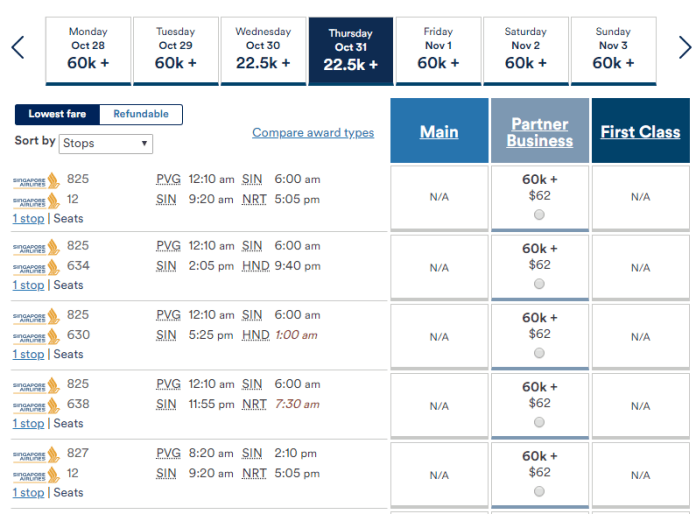 But a better example is flying PVG-SIN in First Class, doing a stopover in Singapore, then flying SIN-HKG in First Class again. The cost is just 35,000 Mileage Plan miles (vs 93,500 KrisFlyer). 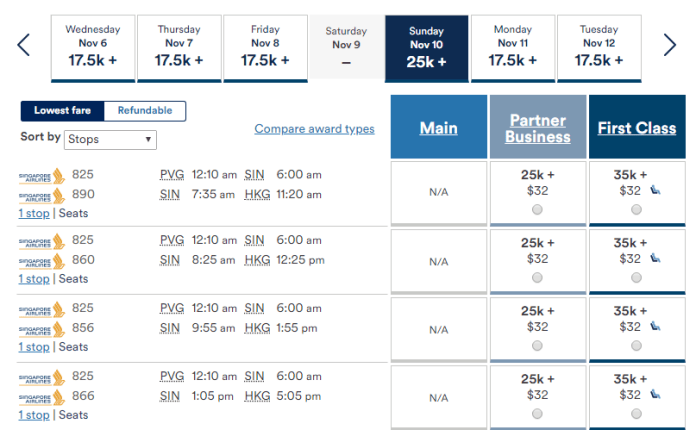 Or how about this one, found by Wilson in the Telegram group. Do one vacation in the USA, and another in Tokyo…all for 80,000 miles in Business Class (vs 142,000 KrisFlyer). 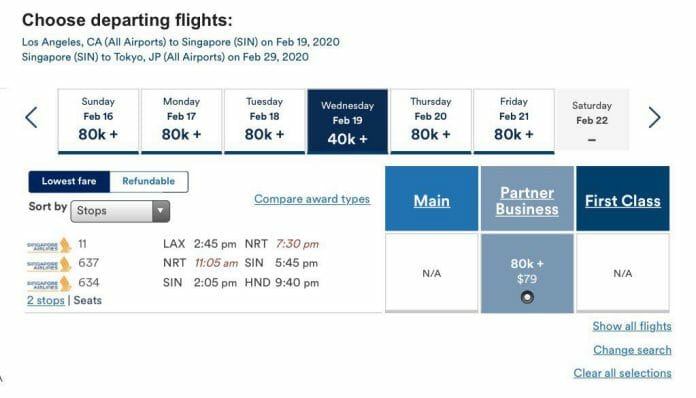 In this sense, it’s a good thing that Mileage Plan can see SQ’s “forbidden cabins”, because if it couldn’t, some of these routings would not be possible.

I’m sure there are other permutations out there, so feel free to play around with the engine. In these cases, it may make sense to redeem Mileage Plan miles for Singapore Airlines travel.

Despite the new possibilities for using the one-way trick, my overall sense is that this is a negative development for KrisFlyer members in Singapore. Unless KrisFlyer plugs the award space open to Alaska Mileage Plan members, we’re going to see increased competition for award seat inventory that was historically “ours”.

As a reminder, from now till 1 November 2019, Mileage Plan miles are on sale at up to a 50% bonus (you’ll need to log into your account to check what bonus you were targeted for). I wouldn’t buy them for redemptions on Singapore Airlines, but it’s still a good deal for those wanting to go to Japan.

” I wouldn’t buy them for redemptions on Singapore Airlines”

because you could get better value by buying and redeeming KF miles.

ahh.. okay.. I did a few searches.. the stopover trick doesn’t really work with SQ. They need the ‘return’ date to be at most a day apart.

Addendum: Oh never mind, I did the search wrongly

But you don’t get to buy enough KF miles outright (how many income tax can you do, how many annual fees can you do etc).

By that I mean outright buying of miles is much easier with AS miles.

Even if you buy miles through uob prvi pay it’s cheaper than mileageplan. And you can buy as many as you want.

Oh yes. I forgot about this ! I don’t have a UOB credit card though. Ha. But thanks for the remainder. Hopefully other banks follow.

Hi Aaron, as a SQ PPS member and and Alaska MVP Gold member can I please pick your brains on something? Assuming that the current access to ‘forbidden cabins’ is here to stay, does it make more sense to credit my future SQ business class flights to Alaska Mileage Plan than to SQ Krisflyer? For example, a one way business lite (‘d’ booking class) SQ ticket SIN-SFO would give me 10,550 Krisflyer miles (base miles flown 8,440 + 25% SQ Gold bonus), but if I credit the same ticket to Alaska I would receive 25,320 Mileage Plan Miles (base miles… Read more »

if you can earn MP miles by flying, then your equation does change, yes. what you need to consider is what the difference in redemption rates is for the places you’re looking to travel. if it’s USA for eg, where redemption rates are roughly the same, then by all means credit your SQ flights to MP. I’m speaking more from the position of someone who has to buy MP miles outright- in which case the cost differential doesn’t make sense.

Thanks and fair points. I’ll keep a close eye on whether European destinations open up and if they do I’ll also check whether they price as per the award chart suggests. Could work out well but let’s see.
Cheers

What you said got me thinking though. I think I’ll add an addendum to the post because if you earn MP miles from crediting SQ flights, then this could be a very good development for you

But how to maintain PPS or SPPS status is also a consideration, and also the PPS rewards (double miles and 50K discount), don’t you think so?

you can double dip. pps value to krisflyer, miles to alaska.

Direct SQ flights to SFO / LAX / SEA don’t seem to be available — didn’t bother trying to look for EWR as that is a rarity even on Krisflyer. I looked at 8-10 random dates from Dec ’19 to Aug ’20. As Aaron points out, you do pay more and don’t get a direct flight so pretty easy decision if Krisflyer is your primary. On the positive side, quite a few interesting Midwest and the South US destinations via DXB on Emirates. It is a much better option to transit through than tired looking European airports. One way stopovers… Read more »

The greatest value you can get out of this change is, to be honest, the considerable increase in your travel options to/from the US. It unlocks a lot of redemptions with a multitude of other US cities, whereas with KF you rely mostly on SQ’s gateway cities with KF award rates (or admittably, but for more miles, many other US cities with KF *A partner award rates).

I think you’re misunderstanding the point of the article. This change doesn’t increase options to/from USA because it’s still about the fact that we can redeem SQ flights on Mileage Plan. The flight options are still limited to SQ flights, not *A, not Alaska’s partners.

If you’re a real miles writer, you really can do better than confusing people, because the “greatest value” of travel options to/from USA has always been around, and not a result of “this change”.

One-way trick more suitable for people outside SIN as SIN is the stopover point. E.g for HKG based, can do HKG-SIN-CAN. Cheaper than JL for SIN based as there is HSR between CAN and HKG.

if you do PEK/PVG-SIN(stopover)-TPE/HKG, it is cost effective to do redemption on SQ with alaska miles. The same itinerary would cost 30.5K + 39K, almost 70K krisflyer miles. With AS, it is only 25K miles.

You can always earn it by flying SQ

If we convert 60,000 Mileage Plan to equivalent valuation of KF it would be approx 84,000 KrisFlyer so defeats the purpose of a stopover trick

AS not suitable for Korea/Japan. Try China and ASEAN

Hi Aaron, I really hope I’m somehow doing this wrong and that’s why it isn’t showing up. But I think SQ has closed the free stopover loophole on Alaska Miles redemptions. Tried searching for a BKK-SIN January, SIN-PEK May ticket but the system doesn’t allow it now. I’m hoping it’s a temporary issue, but seems like you can’t do a long stopover in Singapore now 🙁

yes, it looks like alaska no longer allows a stopover in singapore. this doesn’t affect JAL trick however.

This seems to be blocked too, even with multi city search.
New T&C in Alaska Award Chart: 10. Stopovers are not available on Intra- Asia award redemptions.

Bye bye AS for intra-Asia awards. the next shoe to drop is devalue Asia-US on JL/CX/KE, then no more AS for Asia.