Put aside your petty partisan preferences. There's miles to be earned!

As a long-suffering Arsenal fan, I’ve learned that the only way you can survive is by seeing the funny side of everything. Whether it’s enjoying the comic stylings of Emmanuel Eboue, finding out you signed the wrong Denilson, or complaining to Singtel that your mio TV doesn’t work because Arsenal only seem to pass the ball backwards or sideways, you figure out various coping mechanisms.

It’s also why I never gave the Maybank Manchester United Visa Platinum card a second look, despite it being on the market for almost 8 years. But it has a fascinating bonus mechanic, the likes of which I’ve never seen on any other card. And it can be extremely useful, in some cases… 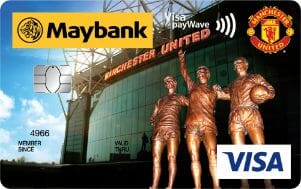 Manchester United and Maybank signed an agreement in 2011 which saw the latter becoming the club’s official retail banking partner in Malaysia, Singapore, and the Philippines.

Like Alexis Sanchez, the card normally doesn’t do much. Every S$1 spent earns 1% cashback and 1X TREATS points (0.4 mpd). Assuming you value a mile at 1.8 cents each, your overall earn rate is about 0.95 mpd, barely worth taking note of (like Eric Djemba-Djemba). 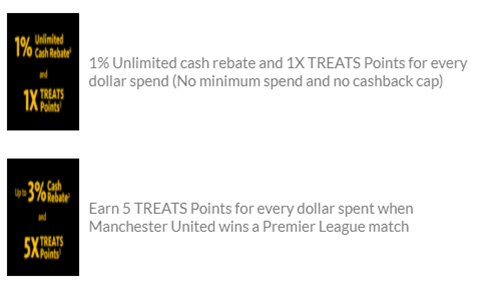 The total cash rebate is capped at S$20 per match day win, so you’d max out the cashback with a total spend of S$667. However, there is no cap on the bonus miles, which effectively makes this a 2 mpd general spending card, much higher than the 1.1-1.6 mpd offered by the competition.

This mechanism also means that the card has the rare distinction of being the only product to get an almost annual devaluation 😉 Alex Ferguson’s departure has been very bad for Maybank miles collectors.

When the Maybank Manchester United card first launched, cardholders enjoyed 28 days of 3% cashback + 2 mpd. In the current season so far, they’ve only had 10. Think about that the next time you’re tempted to complain about stealth devaluations…

How do you maximize the bonus?

But back to the bonus mechanism: The prospect of earning 2 mpd + 3% cashback is too enticing to turn down, even if it means holding the official credit card of The Great Devil™.

There are two ways of approaching this.

The first is the blind faith approach: you spend throughout matchday with abandon, because only plastic fans doubt that a win will happen.

The latter sounds like the more logical option, but therein lies a problem: most of the matches end too late. Now, for the sake of those who don’t follow football, a typical match takes just under 2 hours to complete, including stoppages and half-time.

Here’s the rest of Manchester United’s EPL games for the 2019/20 season:

Only the Bournemouth game on 11 April ends early enough for you to have time to make purchases, and even then, probably only online (or at Mustafa).

I suppose you could take a punt on the matches starting at 10 p.m- if Manchester United have a healthy lead by the 80th minute mark, you’d have about 10 minutes to do all your shopping (and pray that De Gea doesn’t channel his inner Taibi). I can imagine people camped at their computers with all their credit card info keyed in, just waiting for the final whistle to click “purchase”.

But…if you’re buying things online, you could just as well use the Citi Rewards Visa, OCBC Titanium Rewards, or DBS Woman’s World Card to earn 4 mpd. Therefore, I only see a very narrow set of circumstances where this card would be useful.

You might argue that in this case it’s better to use the HSBC Revolution for an uncapped 2 mpd on online transactions, but remember the Maybank Manchester United card earns 2 mpd + 3 % cashback.

The card’s T&Cs don’t mention any exclusions for education payments, CardUp, or RentHero, so these could be potential options for using the Maybank Manchester United card.

I’m particularly intrigued about the CardUp/RentHero use case, because earning 2 mpd + 3% cashback would more than offset the admin fee. In some cases, you could even earn miles for free!

I’m in the process of checking with CardUp/RentHero if they know anything about this, because if rewards are confirmed, the Maybank Manchester United card would be hands down the best card to use.

Remember that with CardUp and RentHero, your card needs to be charged immediately on matchday for you to earn the bonus, so time your payments accordingly.

The main issue is finding a merchant open so late at night. Either you spend earlier in the day and take a gamble, or you wait till the match is over but have an extremely limited merchant selection. This card does reward the faithful!

There’s one line in the T&Cs which worries me:

Posting dates may not be the same as transaction dates, and since you basically have a 24-hour window to spend, this term becomes very important. You could be in a situation where you spend on a day that Manchester United wins, but your transaction only posts the day after.

Maybank TREATS points can be transferred to the following frequent flyer programs for S$26.75 per transfer.

Note that the transfer ratios differ by program; in my analysis above where 1X TREATS= 0.4 mpd, I’m assuming you’re transferring to either KrisFlyer or Asia Miles. You could transfer your TREATS to Malaysia Airlines, but really, why bother?

I’ll be the first to say that the use cases for this card are extremely limited, but if nothing else, it’s a fascinating bonus mechanism. And if you have CardUp/RentHero transactions, this might just be the best card to use.

If you’ve got any experience using this card, please sound out in the comments below.

This is marketing gimmick by Maybank at best. Delete and pass.

This card was arguably less of a gamble back in the days when fergie was in charge….

Hey Aaron, not that it changes things much right now, but this match day points bonus seems to only have started from the 2016/17 season. Maybank added the cashback last year/this season, and for a while at the end of 2019 they changed it to win, lose, or draw 😅

based on the video from when the card was first launched, the match day points bonus also started in 2012 (https://www.youtube.com/watch?v=8VSI8r_Qgvg)

you might be right on the cashback. that wasn’t mentioned at the start. maybe they felt they had to make up for man utd’s declining performance 😉

Ah, I stand corrected on the match day points bonus!

E T
Reply to  Really nobody

When you’re talking about “earning” miles, you are also treating miles as a currency, and you can substitute “miles” for “money” in the previous sentence, so “there’s miles to be earned” sounds correct to me.

Really nobody
Reply to  E T