Earn up to 1,000 bonus GrabRewards points for topping up your GrabPay balance with PayNow...but give up credit card rewards.

From 9 March to 8 April 2020, selected Grab users can earn up to 1,000 bonus GrabRewards points for topping up their GrabPay account via PayNow.

If you’re eligible for this promotion, you should have received a push notification in your Grab app. 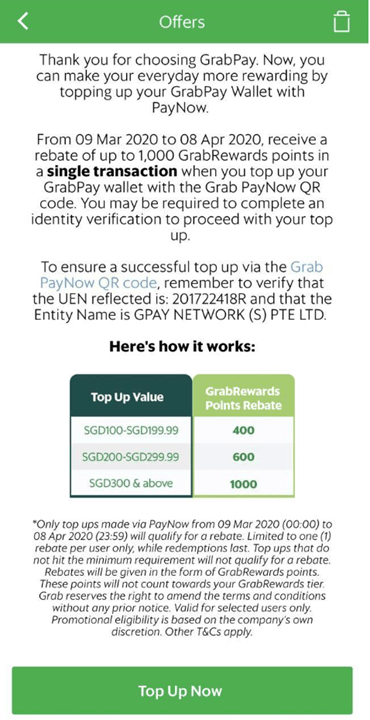 The number of GrabRewards points received depends on how much you top-up, but you’re only entitled to one set of bonus points regardless of the number of top-ups made.

Given that 1 GrabRewards point is worth 0.2 cents, this promotion represents a rebate of no more than 0.8%.

That’s a very poor return, considering what you’re giving up by not using your credit card. Assuming your card still earns rewards for top-ups (and general spending Visa cards mostly do), you could get a ~2% rebate with a 1.2 mpd card.

Alternatively, you could use the Citi Rewards Visa and earn 4 mpd, which would represent a rebate of ~7%. Even if you prefer cashback, you could get a 1.5% rebate with the AMEX True Cashback card.

This promotion therefore is really for those who don’t own a credit card, or whose credit card already excludes rewards for GrabPay top-ups.

Will we see other promotions for top-ups?

Although this promotion is unspectacular in and of itself, it’s interesting to the extent it suggests that Grab realises the need to incentivize top-ups.

Historically, Grab’s taken advantage of the fact that banks offer rewards points on top-ups via credit card, which most people do in order to double dip on bank and GrabRewards points. Grab has to pay the banks a fee, sure, but banks are effectively co-subsidizing the rewards.

However, as double dipping gradually gets killed off, Grab will need to chip in from their end to encourage people to keep putting money into the GrabPay ecosystem. There are two potential ways it can do this:

(1) will almost certainly be more expensive than (2), so it’s no surprise that Grab’s trying the latter with the current promotion. It’s much cheaper for Grab to process PayNow transactions, and GrabRewards points are a captive currency. As the recent devaluation has shown, Grab can freely adjust the points valuation to a figure they’re comfortable with.

The current top-up promotion shouldn’t make you switch away from using a credit card, but assuming you don’t have one, it’s better than nothing.

I suspect we may see more top-up promotions offered by Grab, given the certainty of credit card nerfs in the future. Stay tuned.

Aaron Wong
Aaron founded The Milelion to help people travel better for less and impress chiobu. He was 50% successful.
Previous articleSIA waiving change fees for all tickets issued between 6-31 Mar 2020, regardless of destination
Next articleQantas cuts flights out of Singapore; temporarily closing First Class lounge in Changi

GrabRewards somehow manages to get even worse from 14 October

milelion are you considering become a grab driver while the corona virus is around?