Citibank has been pushing its Pay with Points feature. Here’s 3 reasons to avoid it

Citibank lets you use rewards points as statement credit, but that's one of the worst things you could do.

Citibank’s been making a big push for Pay with Points, and cardholders have received a healthy stream of eDMs advertising the feature.

The idea behind Pay with Points is that cardholders can use their ThankYou points or Citi Miles to offset credit card purchases in full or in part.

Given how Covid-19 has ruled out all travel for the foreseeable future, some cardholders might be tempted to cash out idle rewards points balances this way. But be warned- doing so represents awful value.

How does Pay with Points work?

Eligible transactions for “Pay with Points” will trigger the following SMS: 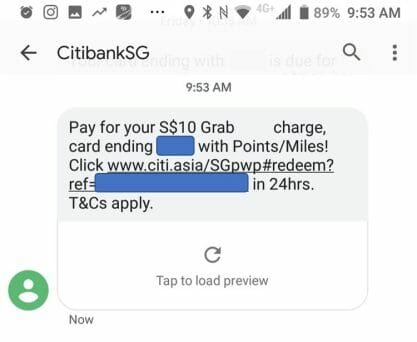 Clicking the link will bring you to a customized landing page, offering you the chance to offset the purchase with your rewards points.

All that’s left to do is tap the “Redeem Now” button, and die a little inside.

There are three main reasons why Pay with Points should be avoided.

(1) You get worse value than using a cashback card

Even though the value of a mile is highly subjective, I’d go so far as to say that 0.57 cents per mile is objectively poor. It’s not much better for other Citi cards, despite the ongoing “promotions”. From now till 21 May, Citi Prestige and Citi PremierMiles cardholders receive 10% off the usual Pay with Points rate. 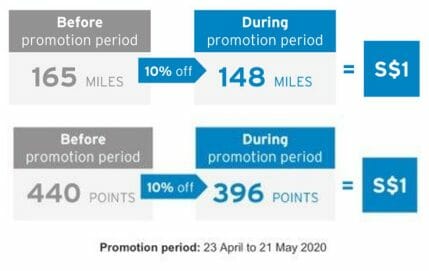 But that still results in an extremely poor yield per mile.

Best case scenario, you’re looking at 0.68 cents per mile. Assuming you use the Citi PremierMiles card and earn 1.2 mpd, your effective rebate is 0.81%.

If you’re going to use Pay with Points, you might as well have used a general spending cashback card in the first place. The Citi Cash Back+, the Maybank FC Barcelona card or the SCB Unlimited would all earn you 1.6% cashback.

(2) Citibank points are too valuable to waste this way

Citibank has the widest variety of transfer partners among any bank in Singapore. 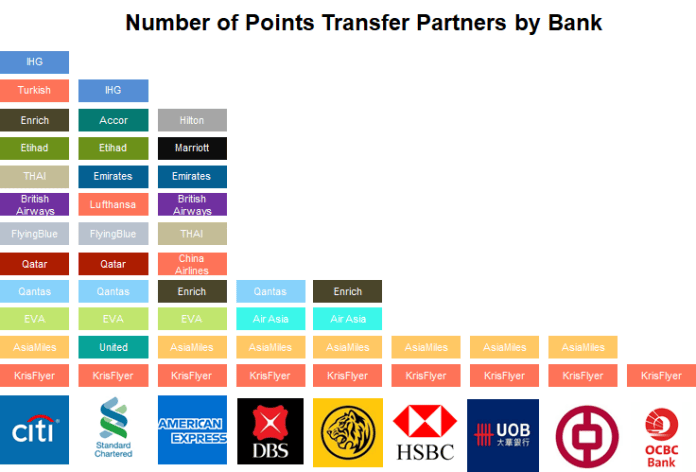 In fact, I’d argue that Citibank points are one of the best currencies you can earn now, given the flexibility acts as a hedge against any particular airline going under or devaluing its rewards program.

It’d be bad enough if you were cashing in, say, OCBC$ (which only transfer to KrisFlyer) at such a poor rate. But the problem is magnified when you give up highly flexible points for a pittance of a return.

Pay with Points isn’t a new feature. It’s been around for quite a while- how long exactly I don’t know, but using the Wayback Machine I was able to put together the following data points:

The data points above aren’t precise, in the sense that I can’t say whether December 2013 was the exact month when the rate was devalued from 262.5 points/S$1 to 270 points/S$1.

However, what they do show is that there’s been a steady devaluation of the Pay with Points rate, averaging 6% per year for ThankYou points, and 11% per year for Citi Miles. For perspective, Singapore Airlines KrisFlyer carried out three program devaluations in that same period, with the average award price increasing at a rate of 1.2% per year.

It means that Pay with Points devaluations have outstripped KrisFlyer, and become a worse and worse deal each year.

I’d stay far away from the Pay with Points option if I were you, and save my Citibank points for other uses.

If you’re even considering this option, you might as well switch over to cashback cards and get a superior return on your spending.

UOB is also doing the same, offering customers to pay with UNI$, which is also a bad deal. Think there is now a trend for banks to do this.

Hi, avid reader here. I am thinking of cancelling Citi Prestige, and have sizable of citi points left. What ffp would u transfer the points to, for maximum flexibility? Thanks!

hello! that’s a tough question, because if you wanted maximum flexibility, you’d keep the points on the bank side. given all that’s going on right now, I’d rather hold on to points and wait till the dust clears before deciding where to transfer them. anyway, each FFP has its own use cases- BA for short haul economy, turkish for flights to Europe etc. the safest FFP for me would be krisflyer, simply because I know it the best, and I have no worries about the airline going under. Devaluing? maybe. but i know it’ll still be around. that’s more than… Read more »

At these rates – you’re better off using a cashback card.