Today's the last day for Platinum Charge and Centurion members to redeem points for double statement credit. Here's how I'm using that for staycations.

So I’ve gone and done something rather stupid.

Last week, I took a staycation at the W Sentosa Cove. It was a decent but not life-changing experience, and it’s probably just as well I didn’t pay cash for it.

But that’s the thing- maybe I should have.

Instead of buying a staycation package, I chose instead to redeem 79,000 Marriott Bonvoy points for a suite. I knew I was going against my own advice, but I rationalised it by saying this was a situation of access over value- I wouldn’t be willing to pay cash for a suite, so the only way I’d get one (since I had no more Platinum status) would be to redeem points.

However, as I was reflecting over the weekend, I had an epiphany that hit me like a ton of bricks. I would have been much better off paying cash for the staycation, then redeeming AMEX Membership Rewards points for statement credit. 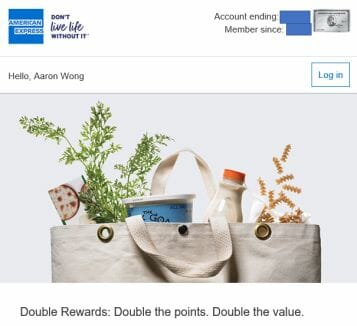 As part of its package of measures to cushion the impact of Covid-19, American Express announced in April that until 20 July, all Platinum Charge and Centurion cardholders would earn double points on all spending, and get double the value (S$9.60= 1,000 Membership Rewards [MR] points) when redeeming points for statement credit.

I really only focused on the former, since my inherent bias is to think of people who redeem points for statement rebate as suckers. But that narrow-mindedness meant I didn’t see a glaringly obvious solution for my W Sentosa situation.

The W Sentosa has a staycation package for a Marvelous Suite which includes daily breakfast, and a S$100 hotel credit. This would cost as little as S$645++ (S$759), depending on the dates.

Now, assuming I paid for the package with my AMEX Platinum Charge card, I could redeem ~79,063 MR points to cover the entirety of the cost. 1 MR point= 1 Marriott Bonvoy point, so basically…

D’oh. I ended up paying more than a hundred bucks for breakfast for two, not to mention additional out-of-pocket expenses for lunch and dinner. To top it off, I wouldn’t earn any Marriott Bonvoy points for my stay (at least not from the room rate).

It gets better. Had I paid for the staycation with my AMEX Platinum Charge card, I’d have earned 4 MR points per S$1.60 spent, or a total of 1,898 points. This would make the net cost of the “pay with cash” option 77,165 MR points.

Which brings me to my next point- over the next few weeks, I’m planning to do a few more staycations so I can review a range of hotels across different price points.

Now, I’m not inclined to dip into my wallet, but given how low staycation rates are, this would anyways be an excellent opportunity to “redeem” them with AMEX points. Consider the following offers (you can find a full list of staycation deals in this post):

When I choose to pay for the Mandarin Orchard staycation in cash, and redeem the value with my MR points, I’m using the equivalent of 25,521 Marriott Bonvoy points. What’s more, I get additional privileges such as:

I wouldn’t get any of these as a Marriott Bonvoy Gold member on an award stay.

Or consider the Raffles Hotel. There’s currently a once-in-a-lifetime opportunity to get two nights for S$936, with some other freebies thrown in. That’s still not cheap, but put it this way: if the Raffles Hotel magically became available on Marriott Bonvoy, and for 97,500 points I could get two nights with a room upgrade, early check-in/late check-out, breakfast and S$100 hotel credit, I’d redeem it in a heartbeat.

Another way of thinking about this is that I’m basically using MR points as if they were Accor Live Limitless points. For those of you unfamiliar with the latter, they’re points that command a fixed value when redeemed for hotel credit. This means your points go further when cash rates are cheap, which is the situation right now.

Now I realise it’s also important to consider what I’m giving up by redeeming MR points for statement credit instead of KrisFlyer miles. S$9.60= 1,000 MR points= 625 KrisFlyer miles, so I’m effectively accepting 1.5 cents per mile. That’s not fantastic, but given that I have a healthy surplus of KrisFlyer miles right now and no way of spending them in the foreseeable future, it’s a trade I’m comfortable with.

Is it too late?

If this argument makes sense to you and you want to start burning some MR points, it’s not too late.

You might be concerned that today (20 July) is the last day of the offer, so even if you book a prepaid staycation now, it might not show up in your account in time. But remember that conceptually speaking, it doesn’t matter whether you offset the actual staycation expense with points, or some other past transaction. You’ll still get S$9.60= 1,000 MR points of value. Therefore, you can simply go to your ibanking and offset however many transactions you wish, until you reach the amount which you’re willing to commit to staycations.

Do note that if you’re trying to do this online, you may run into the following error message:

This happens because I currently have a negative account balance (I went and pre-redeemed some value to use for staycations). Don’t worry-you can call up AMEX customer service, and they’ll manually process the statement credit for you at the S$9.60= 1,000 MR points rate.

You won’t be able to cash this credit balance out via cheque or bank transfer; you will need to spend it with your AMEX card. That’s just fine with me, really, even though there’s some opportunity cost involved (given the lower earn rates that take effect from tomorrow).

Why not just use a cashback card?

One final point: if I’m using my MR points as statement rebate, why not just use a cashback card in the first place?

Well, we need to remember that at the end of the day it’s not so much a miles vs cashback argument as it is a “which is better value” one. With the current double points and double statement credit offer, I’m earning the equivalent of 2.4% cashback on all general spending, and 24% cashback on Platinum EXTRA merchants. I don’t think there’s a cashback card in the world that would give you that kind of value.

Obviously once this promotion ends, I’m not going to consider redeeming MR points at the regular rate of S$4.80= 1,000 points. This is one of those rare cases where circumstances (Covid-19) and promotions (AMEX) have combined to make statement credit a good option.

So that’s where I am now: I’ve redeemed a chunk of my MR points for statement credit, and earmarked it for the staycation fund.

Today’s the last day of the promotion, so I’d advise any AMEX Platinum Charge/ Centurion member with a healthy MR points stash to give this a good think through.

Does anyone else intend to do this?

Aaron Wong
Aaron founded The Milelion to help people travel better for less and impress chiobu. He was 50% successful.
Previous article
New staycation packages on Klook starting from $114 nett- worth it?
Next article
62 hotels now approved for Singapore staycations (including a whole lot in Geylang)

Indeed cashback cards would never give you such vale! Bravo!

You’re right, as usual. It’s a no-brainer for loaded folks.

About a month ago I commented that buying miles at 1.48 cpm from Amex was poor. I also said that the approx 1.536 cpm Amex points to statement credit was worth taking because there would be a mile devaluation of some sort. I believe some people disagreed. The result of lower hotel or airline prices is similar to a devaluation for points or miles (and I pointed this out in my subsequent comments back then). So I’d like to thank Aaron for this latest article illustrating that getting statement credit and paying cash/card really is better than points/miles for staycations,… Read more »

Thanks for the tip. I was spending tons on Amex Cent to get the double points and centurion bonus but did not realise the value of redeeming points for charge. Should have read your article earlier not today!

well not too late as long as it’s before midnight!

Mmm, wouldn’t a cashback card like a HSBC advance give you 2.5% cash back? Assuming you’re a premier/advance customer with HSBC. This goes up to 3.5% if you spurge on a few staycations and spend more than S$2K that month.

Or one of those Amex or other cashback sign up promos giving 3% on the 1st S$5,000 spending etc. make even more sense?

yes, cashback rates on those cards are competitive, but think in terms of absolute amounts. hsbc advance caps you at $70-125 of cashback per month, which means it’d take you almost a year to be able to afford a raffles hotel type stay. with amex 3% of 5,000 is just $150- again, not anywhere close what you’d need for a luxury staycation