Earn up to 15.6 mpd (or 24% cashback) with your AMEX Platinum Charge, and redeem points for statement credit at 2X the value.

With the current restrictions on travel and dining out, many premium cardholders have started to question the logic of continuing to pay annual fees for benefits that can’t be used. This is especially the case for AMEX Platinum Charge members, who pay a hefty S$1,712 annual fee.

It seems like American Express is trying to pre-empt those questions, because they’ve just launched a rather large promotion. From now till 20 July 2020, all Platinum Charge cardholders will enjoy double points on all spending, and double the value when redeeming points for statement credit. 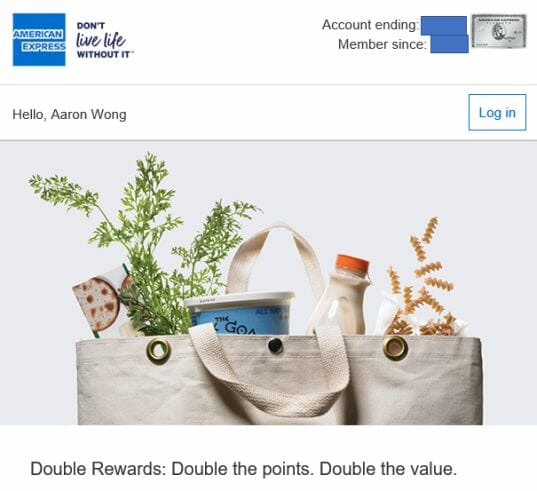 No registration is required, and both principal and supplementary cards are automatically enrolled.

From now till 20 July 2020, AMEX Platinum Charge cardholders will earn double the usual points on all transactions, with no minimum spending or caps (except for Platinum EXTRA merchants).

This means a general spending earn rate of 1.56 mpd, which would make the AMEX Platinum Charge the second best general spending card in the market, slightly behind the UOB Reserve, DBS Insignia, Citi ULTIMA and OCBC Premier & Private Banking VOYAGE cards at 1.6 mpd.

A 1.56 mpd rate also makes the AMEX Platinum Charge a potential candidate for paying your income taxes, rent, insurance, or other bills via CardUp. CardUp charges a 2.6% admin fee for AMEX cards, which means a 1.62 cents per mile figure

Do remember that the bonus points on Platinum EXTRA merchants are capped at S$16,000 per calendar year. Any spending after that will earn 20X points until 20 July 2020, and 10X after that.

Charges on your AMEX statement can normally be offset with Membership Rewards points, at a rate of 1,000 points= S$4.80.

The regular rate is a very poor deal. 1,000 points are worth 625 miles, so it’s like you’re implicitly cashing in your miles for 0.77 cents each.

From now till 20 July 2020, this rate will be doubled to 1,000 points = S$9.60. That’s like taking 1.54 cents per mile, less than what you’d get when redeeming premium cabin tickets, but still equivalent to earning 2.4% cashback on everything (other general spending cashback cards max out at 1.6%).

If you’re spending at Platinum EXTRA merchants, AMEX Platinum Charge cardholders would effectively get 24% off on the first S$16,000 spent. Put that way, it doesn’t sound so bad forgoing miles for cashback.

Perhaps realising that the annual fee will be a major pain point for customers with renewals due in the next couple of months,  AMEX is offering a special rate of 1,000 points= S$11 when using points to offset the fee.

What programs can I transfer Membership Rewards points to?

This is no doubt going to be an expensive promotion for American Express, but it’s also a necessary one. If the Covid-19 situation doesn’t improve, many of the Platinum Charge’s benefits can’t be used, and that’s not going to play well among customers with upcoming renewals.

My renewal isn’t due until September, so I don’t have that decision on my hands yet. I am, however, going to start using the AMEX Platinum Charge as my general spending card for the duration of the promotion.

Do remember that the bonus points on Platinum EXTRA merchants are capped at S$16,000 per calendar year. Any spending after that will earn 1.56 mpd until 20 July 2020, and 0.78 mpd after that.

Hi Aaron, I think the bonus points is 20MR and 10MR rather than 20x and 10x.
I was calculating repeatedly as I’m planning some big ticket purchases and wanted to be sure, that’s why I spotted these little errors.

Thank you once again for your hard work and great tips!

2 of my friends were successful for a waiver of the annual fee, one in feb and one last week

Were they big spenders or long-time (and good client) of AmEx?

Hey hoping that someone can help enlighten me about Aaron saying

“If you’re spending at Platinum EXTRA merchants, AMEX Platinum Charge cardholders would effectively get 24% off on the first S$16,000 spent”

Platinum Extra merchants will have an earn rate of $1.60 : 20 MR points

The math will work after that. 🙂

Hi, great article and sharing. However, may I point out that the effective cashback for regular earn rate is actually 0.6% rather than 1.2?