New GrabPay Power Up promotion: Earn up to 22,000 GrabRewards points for online spending

Since July this year, Grab has been running a monthly promotion called “Power Up”, which offers GrabPay users bonus GrabRewards points for paying online with their GrabPay Mastercard or GrabPay wallet.

Although double dipping opportunities with GrabPay are (almost) all gone following Visa’s MCC change, there are still some potential use cases. I’ll talk about those in a bit, but first, the details.

GrabPay’s latest Power Up promotion runs from 14 September to 13 October 2020. During this period, GrabPay users can earn up to 22,000 bonus GrabRewards points when they spend S$1,000 online.

Here’s the breakdown of each tier:

Registration is required for this promotion. Look out for it on the Grab app homepage, and tap the “Accept Challenge” button. What’s nice is that Grab shows how many rewards of each tier are left, so it’s not a shot in the dark like how some banks run “First X” promotions. 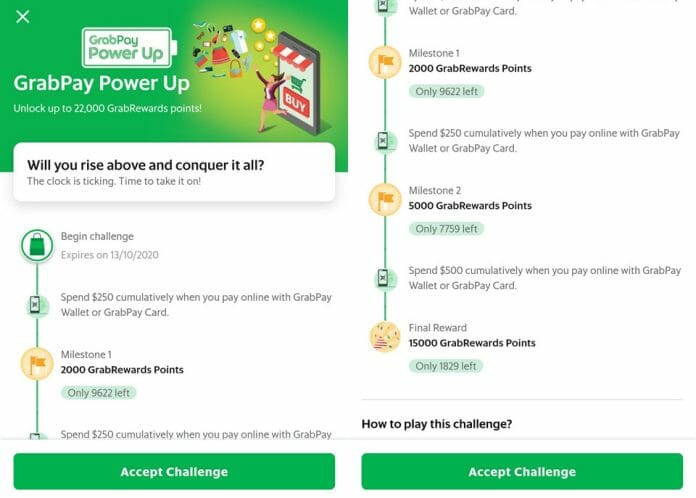 Any points earned through this campaign will not count towards GrabRewards tier progression. Winners will be updated on the campaign page within 14 business days after 13 October 2020.

Are there any spending exclusions?

Grab is excluding three MCCs from this campaign:

MCC 6300 and MCC 9399 were already excluded back when the campaign started in July, but MCC 8220 is a new addition. I hope this doesn’t mean that Grab is planning to add education to its general GrabRewards exclusion categories, as virtually no credit card offers rewards on this category anymore.

What does this mean for the GrabPay Card?

Now that double dipping opportunities are almost all gone (unless you have an AMEX True Cashback or AMEX SIA Business Card), GrabPay competes directly with your credit card for spending.

10 GrabRewards points = 1 KrisFlyer mile, so spending with GrabPay represents an effective earn rate of 0.2-0.4 mpd. So how does this promotion change things? Assuming you’re within the relevant caps and a GrabRewards Platinum member:

You’d still do a lot better by earning a flat 4 mpd with a specialized online spending card (such as the DBS Woman’s World Card or Citi Rewards), but if you’ve exhausted those monthly caps then this is something you could consider.

Alternatively, if you’re spending on categories where credit cards don’t earn points, this promotion could be useful too. Here’s a diagram to illustrate the possibilities (do note that Education and Government Services are explicitly excluded for the purposes of the Power Up promotion):

For example, someone who wanted to make a donation to charity would find that most credit cards don’t award points for this. In that case, he could try using the GrabPay Mastercard instead (keep in mind that Giving.sg doesn’t work with the GrabPay Mastercard), and hit the thresholds to trigger the bonus GrabRewards points.

With the high level of GrabPay adoption, I wouldn’t be surprised if the caps are quickly exhausted. If you have online spending to do that doesn’t attract 4 mpd on other cards, register for the promotion and get it done ASAP.

Aaron Wong
Aaron founded The Milelion to help people travel better for less and impress chiobu. He was 50% successful.
Previous articleDo any credit cards still offer rewards for GrabPay top-ups (and when is GrabPay a good idea)?
Next articleMarriott Bonvoy offering 50% bonus on points purchases