The JW Marriott Hotel Singapore South Beach has long been serving as an SHN facility, with its reopening pushed back a few times as the contract got extended. 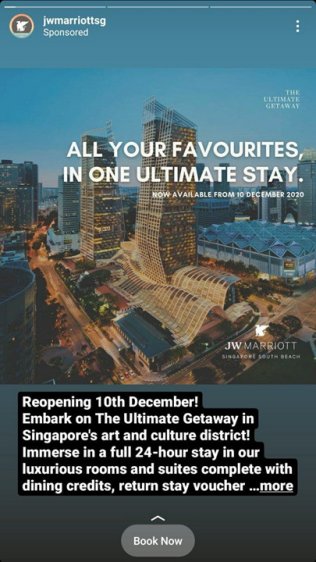 However, the hotel is now ready to reopen to staycation guests from 10 December 2020 onwards. This is a full two weeks ahead of the initially mooted 28 December 2020, and could be useful for those looking to do a year-end staycation.

To mark its reopening, JW Marriott South Beach is offering The Ultimate Getaway staycation package, which includes the following:

I wouldn’t put too much value on the return stay voucher, as rates are likely to increase after the initial reopening period and it’s only valuable if you intend to stay more than once anyway. 2,000 Marriott Bonvoy points are worth perhaps S$16-18 at most, and shouldn’t hold major sway on your decision to stay.

I actually think the best deal for those with Platinum status or higher is to book the flexible Bonvoy member’s rate, which starts from S$288++.

Since you’ll already have breakfast and club lounge access, it makes more sense than paying S$340++ for the Ultimate Getaway package, even after the S$50 F&B credit is offset.

According to Mark at The Shutterwhale, the JW Marriott’s Executive Lounge will reopen with the property, but with the following revisions to operating hours:

The lounge will be closed during all other hours, and breakfast will be served at Beach Road Kitchen.

What rooms does the JW Marriott South Beach have?

There are a total of 634 hotel rooms and suites at the JW Marriott, split into the following categories:

Deluxe Rooms and above have deep soaking bathtubs, and for whatever reason, the Studio category below Deluxe doesn’t appear to be available for sale at the moment. All rooms come with Smart TVs, marble bathrooms, and amenities by Aromatherapy Associates.

You can find some pre-circuit breaker reviews of the hotel below:

The JW Marriott is certainly one of the better-looking hotels in Singapore, and I daresay the sub-S$300 reopening rates are as good as it gets for this property. Since most of the rates I’ve seen have flexible cancellation policies, it might not hurt to lock in something for December first, ahead of the rush.

Anyone planning to stay at the JW Marriott? Is it worth a staycation review?

Which hotels, airlines and cruises are showing the Euro 2020 Football Championships?

I always try not to stay at hotels too near my office building. As this is almost right beside…hard pass.

Hahah really? If the emirates palace were next to your office would it still be a hard pass

I Have an existing booking which comes with Executive lounge access. Does that mean my breakfast is covered already? Don’t really need the F&B credit.

correct. you will be entitled to breakfast in the cafe.

can we use Marriot points to book for this reopening deal?

AMEX KrisFlyer Card
Get up to 23,300 miles with $3K spend in the first 3 months
Offer Expires: Jun 30, 2021
See All Offers
Offers may only apply to new-to-bank customers. Read T&Cs for full details.
Advertisment