Qatar Airways has reversed its 2018 devaluation, which creates some sweet spots for Business Class travel between Singapore and Europe.

Back in May 2018, Qatar Airways pulled quite the stunt with its Privilege Club loyalty program. Overnight and without warning, award prices increased by on numerous routes by up to 80%, leaving frequent flyers in the lurch.

I was shocked but not surprised (if that phrase even makes sense) by this development. After all, the program had a bit of a reputation for hijinks, even charging an audacious “award redemption fee” of up to US$75 per segment, just to redeem your miles (since removed). Was such a move really unforeseeable?

But something has changed, and for the better: As spotted on Flyertalk, Qatar Airways has quietly reverted its award pricing to 2018 levels. It’s funny there’s been no announcement; you’d think they’d want to shout this from the rooftops and score some PR points. I suppose you can’t say Qatar has double standards then- quiet devaluations, quiet revaluations!

Qatar Airways does not have an award chart, so you’ll need to use their Qcalculator to find the cost of a given route. Use it like you would a regular flight search- pick the cabin, airline, origin and destination. 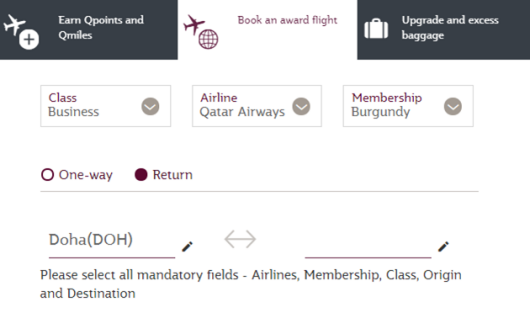 To save time, we’ll only look at Business Class redemptions- Qatar Airways does operate First Class, but only on a very restricted number of routes and aircraft. Here’s how they measure up versus KrisFlyer and Asia Miles.

The USA is a wash, but Europe rates are very reasonable indeed- especially considering how many additional European destinations Qatar Airways serves compared to Cathay or Singapore Airlines.

For those who did the Qatar Privilege Club status match earlier this year, it’s worth noting that Platinum and Gold members will receive a 5% discount for online award flight bookings, which would represent savings of up to 3,750 miles on a one-way Business Class flight to Europe.

Wait, what about those fuel surcharges?

If you’ve read my previous posts on Qatar Airways Privilege Club, you’ll know I’m like a broken record about fuel surcharges (YQ/YR for short). And rightly so- Qatar Airways has some frightening YQ/YR.

For example, consider the following return Business Class ticket from Singapore to New York. You’ll pay S$1,026.80 of YQ/YR on top of airport taxes and miles! 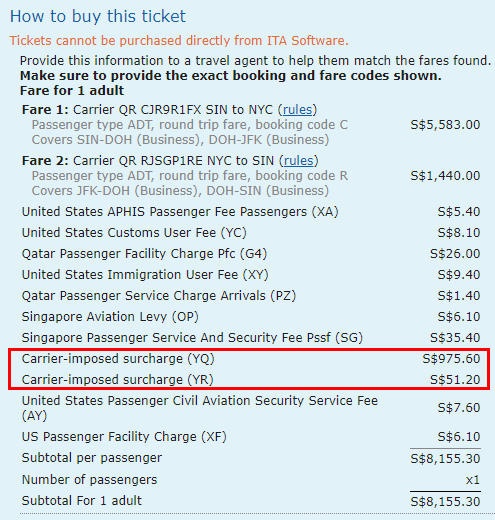 But here’s the thing. Compare that to a Privilege Club Business Class award between Singapore and New York- the cash portion adds up to just S$99.40! 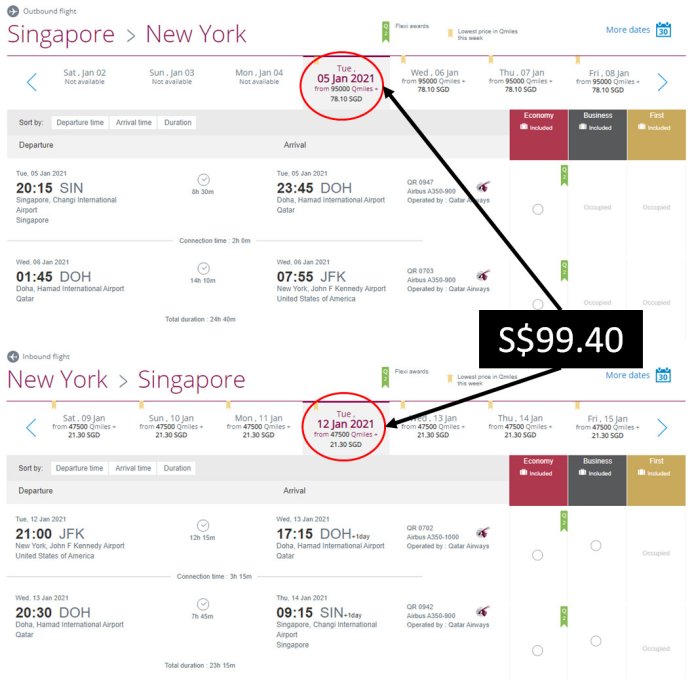 And here comes my OH moment. I cannot believe I am only learning about this now, but apparently Qatar Privilege Club members have not had to pay fuel surcharges on Qatar Airways awards since 2015. I suppose it’s because I only ever searched for Qatar award space via British Airways Avios/Asia Miles, but in any case, it probably wasn’t worth a look with the rates that Qatar Privilege club was charging from May 2018 to November 2020.

With the reduced award costs and no fuel surcharges, Privilege Club awards on Qatar Airways can make perfect sense for those looking to travel between Singapore and Europe.

So I should transfer my points to Qatar Privilege Club now?

Not so fast. While Citibank and Standard Chartered offer points transfers to Qatar Privilege Club, the question you should be asking yourself is: do you feel lucky, punk?

I mean, the current prices for Europe awards are very nice indeed, but I certainly wouldn’t feel comfortable maintaining any significant balance in Privilege Club, if Qatar Airways can just flick a switch tomorrow to hike rates again.

If anything, this should be a lesson to loyalty execs- once you’ve crossed the line of no-notice devaluations, good luck getting anyone to use your program as anything other than a temporary box, where miles are used almost as quickly as they’re accrued.

There have been other recent scares with Qatar Airways awards. Earlier this week, Executive Traveller (quoting a Qatar Airways spokesperson) reported that lounge access would be removed all award tickets. Thankfully that’s since been straightened out, and Qatar has reaffirmed that lounge access continues as per normal. But things like this don’t particularly engender confidence in the program.

If your travel plans for 2021 involve Europe then by all means transfer your points in, but be sure to redeem them for awards straight away. An idle balance in Qatar Airways Privilege Club is an endangered balance.

2018 was supposed to be the year I experienced Qsuites, and when that didn’t work out, I made plans for 2019. That also fell through, and I was so sure 2020 would finally be the year, but right now I’m happy enough just to board a plane for Hong Kong.

So perhaps 2021 will be my Qsuites year, and when the time comes to redeem it, I’ll certainly do so via Privilege Club assuming the rates are the same. Who knows how long this will last?

Anyone reconsidering Qatar Privilege Club after these changes?

With Europe there is a one stop at DOHA so that’s not ideal and I’d rather go direct. For USA breaking the journey at DOHA is actually the right timing especially East coast and Qsuites.

Problem with Europe is that DOH is pretty much in the middle and 2 x 7-8 hr flights is not good for zzz. Though I’d have to say DOH is a good layover airport and lounge is awesome.

That’s a good point, regarding one stop and direct. But if you’re flying for leisure, I think most people won’t mind seeing the Doha j lounge and maybe even getting qsuite twice

How good is the lounge that it is worth a stop for a few hours? Beside the lounge, anything else to do in Doha?

Qatar sometimes run those stopover holiday programs where they may offer free night stay or tour if your layover is >x hrs – but not sure if this applies to award bookings.

the qatar business class lounge in doha is a decent one, not somewhere i’d deliberately schedule a longer than usual layover, but definitely quite painless place to pass 3-4 hours.

actually, it used to be 3,000 points to 1,000 miles. but congrats! it appears you’ve spotted an unannounced devaluation. thanks for pointing it out, and refer to the latest post on the homepage

Have they also changed the rule that excludes lounge access when traveling in (say) J redemption? It was the case that redemption tix came with no benefits.

you could always access the lounge when traveling in a J class redemption, and that has not changed.

what you can’t do is access the lounge when traveling on a paid cash ticket and upgrading to J with miles.

Thanks for the information

With the 15% bonus krisflyer miles promotion right now, it seems that flying to USA via SQ is cheaper?
That leaves Europe as the sweet spot for Qmiles.

yes, i’d only use Qmiles for europe, if at all.

Any stopover trick with qmiles if you want to stop over in Qatar for say e.g. 4 nights enroute to/from europe? Seems this cannot be booked online at least?

Looks like one can only check award availability on the QR website if one has enough miles for the journey in one’s PC account? Is there a workaround? Otherwise one cannot really plan before depositing miles into the account, correct?

nope, it’s possible to check without miles. i’m able to search with a 0 balance.

AMEX Platinum Credit Card
Get up to 43,250 MR points and a Fullerton staycation with $5K spend in the first 3 months
Offer Expires: Sep 30, 2021
See All Offers
Offers may only apply to new-to-bank customers. Read T&Cs for full details.
Advertisment