Back in April 2018, the doors opened at the 49-room Six Senses Duxton, the luxury chain’s first city-centre location and a marked departure from its traditional beach/mountain-top haunts. Later that year, its sister property in Maxwell opened with a further 138 rooms, merely three minutes away by foot.

But Six Senses’ ill-fated tryst with Singapore didn’t last long. Amidst the COVID-19 pandemic came the news that Six Senses would be exiting the Singapore market, barely two years after it entered. The chain provided no further color than the following:

“Six Senses ceased management of Six Senses Duxton and Six Senses Maxwell from May 31, 2020. This was agreed mutually between Six Senses and the hotels’ owners.”

Hotel owners The Garcha Group later announced that both properties would reopen under Marriott’s Autograph Collection, a catch-all bucket for independent properties that don’t fall neatly into a specific brand identity.

The Six Senses Duxton and Maxwell have been renamed the Duxton Reserve and Maxwell Reserve respectively, and in a sense, the wheel has come full circle. Back in 2016, the original plan was for the two properties to operate under Starwood’s Luxury Collection, which would ultimately have been subsumed under Marriott anyway. Who says you can’t go home again?

While 2020 isn’t a particularly auspicious year to open a hotel, the Duxton Reserve will nonetheless be proceeding with its soft launch on 11 December 2020. 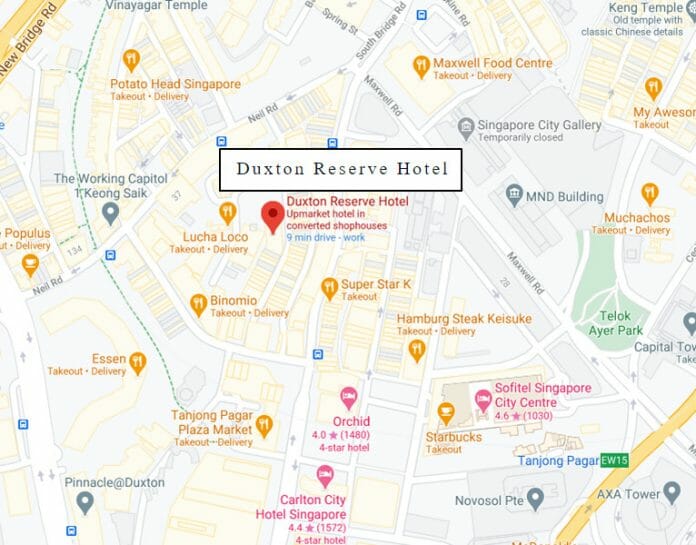 The Duxton Reserve is located at 83 Duxton Road, in the heart of the too-hip-for-you Keong Saik district. Within walking distance are excellent eating and drinking venues, such as Binomio, Burnt Ends and Potato Head Singapore.

To the best of my knowledge, the hotel has undergone virtually no renovation, in no small part because it was practically brand new when Six Senses exited the picture. That said, the new room categories don’t map exactly to the old ones, which leads me to believe there’s been some reclassification behind the scenes.

It looks to me like the seven Nutmeg and 12 Shophouse rooms have been combined into one category, yielding a blended average size of 20 sqm.

Also, the addition of an “executive club” tag to all but the Shophouse category leads me to believe the hotel will be offering some sort of club privileges to 30 out of 49 rooms. It’ll be interesting to see how that will work out when the majority of guests have access, although the hotel is still small enough for there to be an exclusive feel.

In terms of F&B, Chinese fine-dining restaurant Yellow Pot will return (but hopefully not their policy of charging S$3.50++ per person for drinking water- yes, 50% of this went to support clean water access around the region, but why not just charge S$1.75++ and call it even?), and its bar will be renamed Anouska’s, after the hotel’s designer (and former Bond Girl).

Although the Duxton Reserve will ostensibly fall under the Autograph Collection, there’s no trace of it on the Marriott website yet.

In the meantime, you’ll need to make your bookings directly via the hotel’s official website, which is accepting stays from 11 December onwards. Unfortunately, the booking system doesn’t have a rate calendar so I can’t give you a sense of the price ranges. Suffice to say, you can expect to pay the following room-only prices on opening night:

The hotel’s official website lists a package called Anouska’s Festive Staycation that prices at a flat S$306++ (S$360 nett) for a stay in a Shophouse Room up till 28 February 2021, with the following inclusions:

But it’s probably better to book via Chope, which is offering a (non-refundable) package for a Shophouse Room at the Duxton Reserve at S$277 nett (Mon-Thu) or S$314 nett (Fri-Sun) with the following inclusions:

If you fancy a bit more space, a Duplex Suite is available for S$382 nett on weekdays and S$433 nett on weekends, with the same inclusions.

The Six Senses Duxton and Maxwell were previously part of the American Express FHR program, but there’s no sign they’ll be returning yet.

One thing that’s unclear right now is how much award nights at this hotel will cost when it gets added to the Marriott Bonvoy program. If the Vagabond Club is anything to go by, we might see the Duxton Reserve assigned to Category 5, which costs 30,000-40,000 points per night depending on dates.

I’m also not sure whether integration with Marriott Bonvoy will start from day one, which means initial stays during the soft opening may not earn points or elite status credits. I’m checking with the hotel and will update this post when I hear back.

If you’re thinking of checking out this hotel, here’s some reviews of the erstwhile Six Senses Duxton to whet your appetite:

Stayed at the Vagabond and Six Senses Maxwell before. Quite chic and elegant deco. Vagabond even had his and hers slippers (not LGBTQ friendly?) Six senses Maxwell gifted Po Chai Pills and Tiger balm for turnover service. Only downside was the intimate room space.