From now till 11 February 2021, earn 2X KrisPay miles at selected merchants across Singapore. Stack with your credit card for up to 14 mpd.

To kick off Chinese New Year, Kris+ (formerly known as KrisPay) is offering 2X miles at more than 30 merchants across Singapore, which allows users to earn up to 10 mpd. This can be stacked with up to 4 mpd with the right credit card for 14 mpd total. 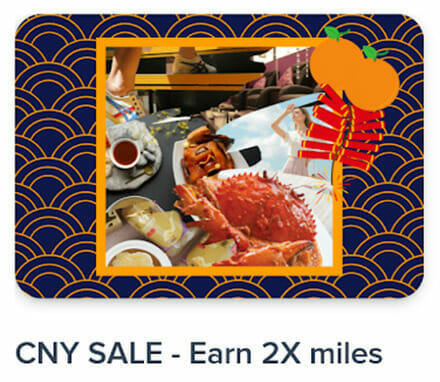 From 25 January to 11 February 2021, Kris+ users will earn 2X the usual miles at the following merchants:

There is no cap on the maximum miles you can earn with this promotion. Do note the Kris+ app shows the upsized rate already, e.g if you see 2 KrisPay miles per S$1 at Polar Puffs & Cakes, that’s the final rate. 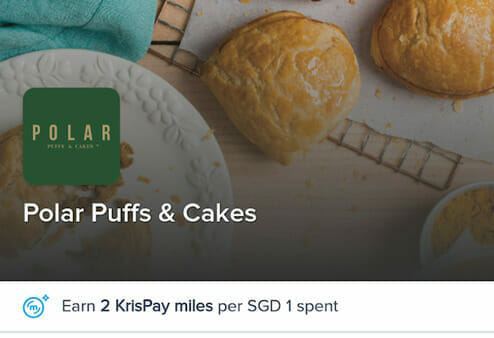 It costs you absolutely nothing to earn miles with Kris+, so there’s no reason you shouldn’t be doing this.

How do I earn miles with Kris+?

The old KrisPay app received a major visual makeover when Kris+ launched, and the “Earn” button was relocated. To find it now, tap “Wallet” on the home screen, then “Earn”. You’ll need to manually type in the amount you’re spending, which generates a QR code that you let the cashier scan. 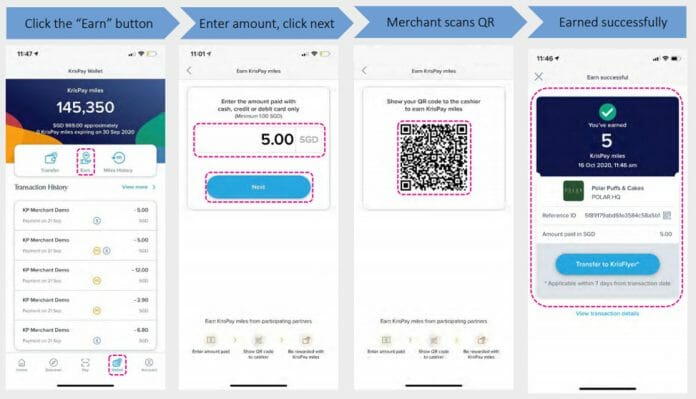 Frankly, I’m not a fan of this process as anything that requires manual customer input is prone to errors and forgetfulness.

Speaking of forgetfulness, it’s not enough to remember to earn- you need to remember to transfer too. KrisPay miles earned via Kris+ can only be transferred to KrisFlyer within 7 days of the transaction. Wait any longer, and they’ll be stuck in Kris+ forever (with a six month expiry, to boot). 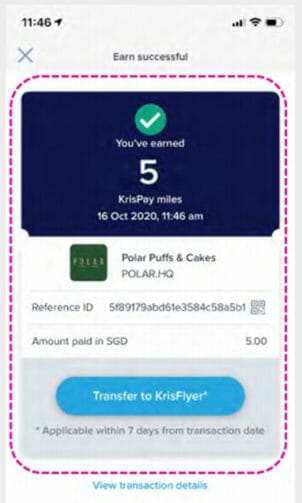 Fortunately, a big “transfer to KrisFlyer” button appears upon completing your transaction, so there’s no excuse to not do it immediately.

Also, if you happen to spend a portion of the miles earned via Kris+, the whole chunk can’t be transferred to KrisFlyer. For example, if I earn 100 miles on a given Kris+ transaction and spend 10 of them, I can’t transfer the remaining 90 to KrisFlyer.

But there’s no reason you should be spending miles via Kris+ anyway, because you earn a dismal 0.67 cents per mile when you do so. This value is sometimes boosted through the various Kris+ milesback promotions, but I still wouldn’t advise it.

What card should I use with Kris+?

There is no such thing as the “best card for Kris+”, because it all boils down to which merchant you’re transacting with and what MCC it uses. Remember, your credit card is still charged by the merchant as per normal; all you’re doing is using the Kris+ app to pick up some extra miles in the process.

The simplest option is just to use mobile payments (not tapping the physical card) with the UOB Preferred Platinum Visa, which earns you 4 mpd on the first S$1,110 per month.

Otherwise, you can use the following cards for dining:

The following cards can be used for shopping and retail:

I wouldn’t be spending KrisFlyer miles through Kris+, but there’s no harm in earning them. Just be careful to transfer them immediately to your KrisFlyer account, or else they could end up stuck in Kris+ forever.

I do hope you have better luck at Kris+ merchants than I do- at all the Bottles & Bottles outlets I visited so far, the cashiers either said the Kris+ app was down or they didn’t know how to use it. It’s incredibly disappointing, and the kind of thing that turns people off a platform altogether.