KrisShop special: Should you redeem your KrisFlyer miles for Apple products?

From now till 30 April, KrisFlyer members can redeem miles for Apple Watches and AirPods on KrisShop at 20% off. Should you bite?

You may have received an eDM from Singapore Airlines about a “KrisShop Spectacular Deal”, which offers 20% off Apple Watch and AirPods.

This deal is available for orders placed by 6 p.m on 30 April 2021 and paid for entirely with miles. The full T&C can be found here.

With travel still grounded for the foreseeable future, it’s understandable that KrisFlyer members may be itching to clear some of their balance. But is this the right option? 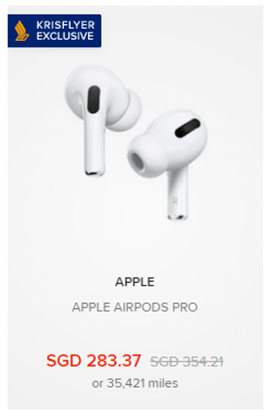 But second, it’s not actually possible to pay with cash; the cash price is merely illustrative. Note how the screenshot above shows that the item is only available for miles redemption, not cash payment.

However, since the cash price isn’t actually available, a more accurate calculation would be to take S$354.21 ÷ 35,421 = 1 cent per mile. S$354.21 is the original price charged outside of this campaign (and, for the sake of comparison, is the official retail price once GST is factored in).

So the long and the short of it is that KrisShop is giving you a value of 1 cent per mile when you buy Apple products with your KrisFlyer miles during this period. Put another way, it’s a 25% bonus on the regular value of 0.8 cents per mile.

Is this worth my KrisFlyer miles?

Only you can answer that question, but for perspective, here’s how much value you’d get per mile if you opted for other KrisFlyer redemption options:

1 cent is like 3.6 roentgen- not great, not terrible. It’s a OK price for those who have a ton of miles and want to cash out some of their balance, but it’s not the value you should be aiming for normally.

The other thing to consider is that Apple products have become the new luggage, in the sense that banks have taken to giving them away for credit card sign-ups. Over the past few months we’ve seen SingSaver giving Apple watches (albeit the SE and Series 3 models) as well as various types of Apple AirPods to new Citibank and Standard Chartered cardholders.

In fact, the current sign-up gift for new Standard Chartered cardholders is a pair of Apple AirPods Pro, with a minimum spend of S$300. It’s an option worth considering, if you’re counted as new-to-bank.

As a side point: if you’re an American Express cardholder, you can use your Membership Rewards points to pay for Apple products via the Apple Reward Store. From now till 30 June 2021, you’ll receive a special rate of 1,000 MR points= S$6 (the regular rate is 1,000 MR points= S$5).

For those with an AMEX Platinum Charge or Centurion card, that’s equivalent to accepting a value of 0.96 cents per mile. For all other AMEX cards, that’s 1.08 cents per mile- and keep in mind, you have the option to make partial payment with miles and cash.

What about Elite miles and PPS Value?

As you’re probably aware, Singapore Airlines has launched an “earn on the ground” promotion that runs all the way till 28 February 2022. As part of this campaign, KrisFlyer and PPS Club members can earn Elite miles and PPS Value by converting rewards points from bank and other non-air partners, spending on co-brand cards, or making purchases with KrisShop or via Kris+.

While spending on KrisShop will earn 3 Elite miles or 1 PPS Value per S$1, this does not include purchases paid for with KrisFlyer miles. This can be found in the FAQs:

For those who really want the latest Apple gadget and have a surplus of miles to spend, I suppose you could do worse than this. I’m not exactly giving it a ringing endorsement, but it’s not quite as dumb as buying an iPhone 8 with your miles…

Do note that it’s sometimes possible to get more than 1 cent per mile with the various milesback offers that Kris+ runs. That might be a better option for those looking to cash out.

seems like AppleCare+ (assuming one is getting) and GST has to be paid in cash thus earning you that bit of Elite and KF miles. Apple don’t offer discounts also for their products so it can be quite tempting too.

ah that’s interesting, I wasn’t aware the GST had to be paid in cash. Yeah, then you’d earn an ever-so-small amount…

No need to jump into this, Krisflyer just extended miles validity by another 6 months with new expiry from Apr 2022 onwards

Great idea given we don’t know when the next devaluation will come. And it’s better than a staycation.