Last month, Singapore Airlines pulled all First Class and Suites availability for revenue and award bookings up till 28 February 2022. While this wasn’t completely unexpected, it was still a sobering reminder that things weren’t going back to normal anytime soon.

However, it now appears that First Class space has returned, effective June 2021. I’m currently able to find First Class seats for revenue and awards to Jakarta, Hong Kong and Sydney, and I strongly suspect London will soon follow.

While it’s unlikely we’ll be able to travel to these places straight away, it’s good news for those holding out hope for travel in the second half of the year.

Why bring back First Class?

It seems to me that the return of First Class is more a byproduct than a deliberate decision.

Singapore Airlines has been gradually scaling up its flight schedules every month, as passenger volumes slowly start to recover. This has progressively stretched the capacity of its long-haul A350-900s, which necessitates a recall of the B777-300ERs to long-haul flying.

Unlike the A350-900s, the B777-300ERs have a four-seat First Class cabin (check out my review here), and if you’re operating the aircraft, you might as well sell the seats. Moreover, it’s no secret that SIA is extremely brand conscious, and offering a First Class product goes a long way to preserving that premium standing.

In fact, First Class space may return even sooner than June. 23 April will see the B777-300ER deployed to London, its first long-haul route in almost a year, and I can’t see SIA letting the cabin go out empty. 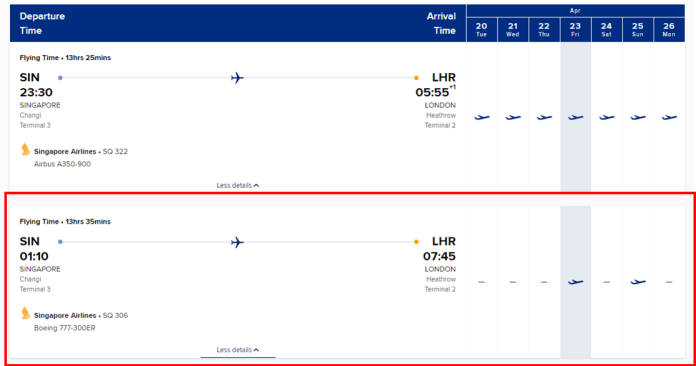 I’m curious about what the post-COVID First Class inflight experience will look like. I don’t see any reason why it should be radically different from before in terms of F&B and amenities, although there will obviously be some changes (e.g you probably won’t pick pralines off a common plate with your bare hands anymore, and you’ll have to mask up the whole time, even while sleeping).

The biggest change is likely to be on the ground, where all eligible Singapore Airlines passengers are currently sharing one lounge. This facility (which is almost certainly the new permanent KrisFlyer Gold lounge) is being used until the SilverKris lounge renovations are completed at the end of 2021.

While First Class may be back on the menu, it’s best to temper your expectations regarding the return of Suites.

Suites are only available on the A380-800s, and all of SIA’s superjumbos are currently sitting idle in the desert or in hangars. From what I’ve heard, there’s no plan to bring them back this year, and even 2022 looks dicey. Given how relatively cost ineffective they are compared to twin-engine jets, it’s unlikely we’ll see the A380 reintroduced at least until all 27 B777-300ERs are back in service.

So keep an eye on B777-300ER utilization, because it’s the likely indicator of when the A380 returns.

There’s little doubt that Singapore Airlines still sees a role for First Class in the future. Not only has it committed to refurbishing all of its A380s with the latest Suites cabin products, it’s also announced plans to install a First Class cabin on its upcoming B777-9s (which will replace the B777-300ERs). In fact, it recently converted 14 B787-10 orders into 11 more B777-9s, for a total of 31 aircraft.

Unfortunately, the B777-9 has been delayed by technical issues, and 2024 is the earliest we could realistically see Singapore Airlines getting their hands on them. Remember: Emirates and Lufthansa are ahead in the queue anyway.

Singapore Airlines is also building a new First Class and Private Room lounge at Changi, which as mentioned earlier will be completed by the end of 2021. It stands to reason that we’ll get to fly First Class on SIA again; we just need to be patient.

Singapore Airlines has brought back First Class from June 2021, although it could potentially start as soon as next week on the London route. Schedules are far from set in stone, but they at least provide an indication of the airline’s intentions.

And hey, the prospect of flying First Class to Hong Kong on the ATB should cheer up a few people…

Aaron Wong
Aaron founded The Milelion to help people travel better for less and impress chiobu. He was 50% successful.
Previous articleKrisShop special: Should you redeem your KrisFlyer miles for Apple products?
Next articleSingapore Airlines extends KrisFlyer miles until at least April 2022

Currently F&B in business is like (or even worse than) it used to be in economy. Maybe the post COVID 1st class F&B will be like old premium economy (but with no or minimal alcohol).

Can share more? Haven’t had the chance to see any trip reports of post covid j travel in sq

But tourism into Singapore is suspended for most of the world until at least September. 🙁

Amazing news! Was quite disappointed that First Class may not be available for a long time when borders open back up. Very pleased to hear.

Don’t look good for mile holders when you see everything waitlisted when it is probably still empty now. Do you think it will be worse once leisure travel opens up? Seeing SIA would rather sell revenue tickets

Based on the last ATB with Hong Kong that unfortunately didn’t begin, yes SIA would prefer revenue tickets, but eventually a lot of miles tickets did open up.