From 1 July 2021, AMEX CapitaCards will earn up to 30 STAR$ per S$1 spent at CapitaLand Malls, double the existing rate.

American Express has refreshed the AMEX CapitaCard for the first time since it launched in 2016, making it more rewarding for spending at CapitaLand Malls.

From 1 July 2021, AMEX CapitaCard members will earn up to 30 STAR$ per S$1 spent at CapitaLand Malls, double the current 15 STAR$. This stacks with the existing bonuses for STARS Xtra Partners, yielding up to 80 STAR$ per S$1.

It gives the card a bit more bite. but most people would still find better value from using 4 mpd cards when shopping. 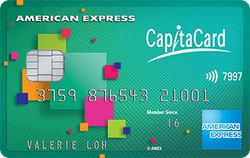 From 1 July 2021, the earn rates on the AMEX CapitaCard will change as follows:

The earn rate for spending at CapitaLand Malls been increased from 15 STAR$ to 20-30 STAR$ per S$1, depending on whether the mall is classified as a town or heartland location.

For perspective, 5,000 STAR$ is worth a S$5 eCapitaVoucher, so your rebate structure looks like this:

It’s a dismal card to use for spending outside of CapitaLand Malls, that’s for sure. Even within  CapitaLand Malls, the current proposition is marginal- with the launch of the UOB Absolute Cashback Card and its 1.7% cashback everywhere, it’s hard to justify earning 1.5% rebates in a restricted currency. I suppose that’s why AMEX felt compelled to make the change, and the revised rebates of 2-3% (albeit capped at S$1,200 per month) improve the deal somewhat.

However, if you’re shopping at STARS Xtra Partners, a 7-8% rebate is quite tasty. The problem is the list of participating merchants is extremely restricted- just eight at the moment.

…this implies the following earn rates:

That’s way too high a price to be buying KrisFlyer miles, let alone in a time like this. Save your STAR$ for spending at CapitaLand malls and you’ll be much happier.

What if you need more STAR$?

If you’re invested in the CapitaStars program and need more STAR$ beyond what the AMEX CapitaCard can offer, here are your other options for accruals.

Transfers from KrisFlyer to STAR$

KrisFlyer miles can be transferred to STAR$ at the following ratio:

A maximum of 30,000 KrisFlyer miles can be transferred each calendar year, and all conversions are instant.

As mentioned earlier, 1 STAR$ is worth 0.1 cents, so you’re basically trading 3,000 KrisFlyer miles for S$21, yielding a value of 0.7 cents per mile. That’s extremely grim, ranking near the bottom of your options for redeeming KrisFlyer miles.

Transfers from GrabRewards to STAR$

STAR$ packages periodically appear in the GrabRewards catalogue, but tend to get sold out very quickly. The rate is usually 2,500 GrabRewards points= 5,000 STAR$, and since 1 GrabRewards point is worth 0.2 cents, this trade is roughly on par.

In short, the only option that really makes sense is the GrabRewards route. Do look out for GrabRewards Flash Sales to maximize your value.

The AMEX CapitaCard is now up to twice as rewarding for shopping at CapitaLand Malls, but I’m still of the opinion that you’d do better with a 4 mpd card instead.

Even if you’re not a miles collector, you might find the 1.7% cashback offered by the UOB Absolute Cashback Card preferable to a 2% rebate in the form of vouchers.

Earn miles on your mortgage installments with CardUp

AMEX KrisFlyer Card
Get up to 23,300 miles with $3K spend in the first 3 months
Offer Expires: Jun 30, 2021
See All Offers
Offers may only apply to new-to-bank customers. Read T&Cs for full details.
Advertisment