ShopBack has been steadily expanding its app, turning it into a platform for deals, vouchers and other goodies. You can even use your cashback balance to pay for purchases, useful for those who haven’t hit the S$10 minimum required to cash out.

The ShopBack app has also added a staycations section, with a rather nifty deal for the Shangri-La Valley Wing. 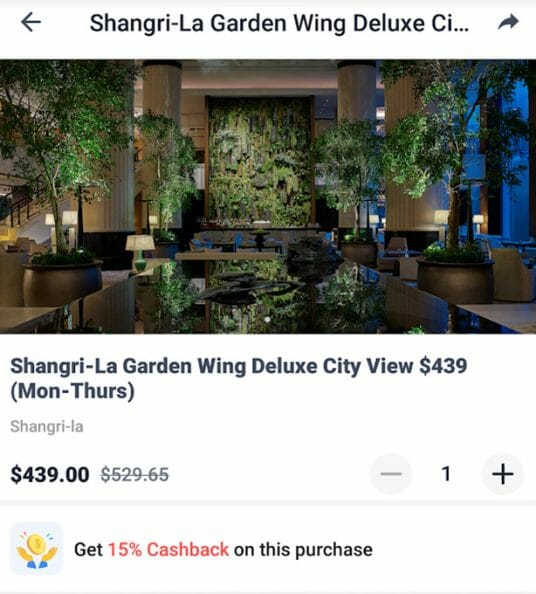 The deal can be booked via this link (only works on a mobile device with the ShopBack app installed)- it will default to a Valley Wing package, but you can scroll down and tap on the Garden Wing option. 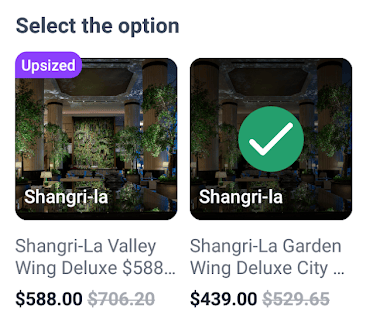 But wait, wasn’t I talking about the Valley Wing? Yup, scroll down and look at the inclusions: 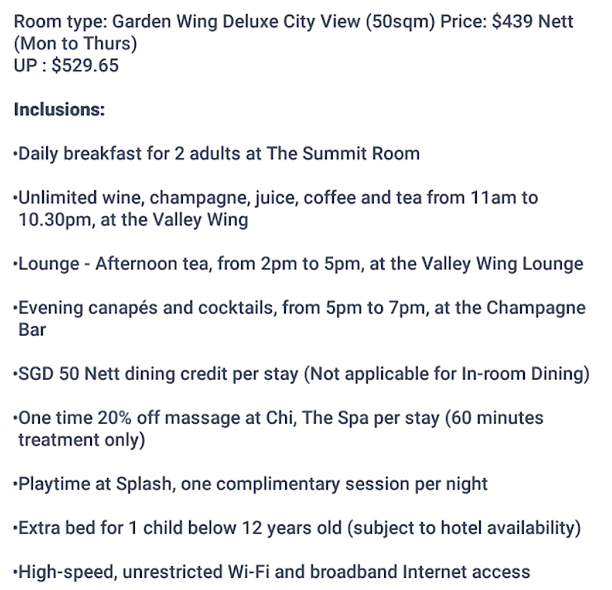 Breakfast at the Summit Room, all day wine and champagne at the Valley Wing, afternoon tea and evening canapes- those sure sound like Valley Wing benefits to me. Plus, they even throw in a S$50 dining credit.

Now, it’s certainly possible this is a mistake, and some intern simply copied the Valley Wing description and pasted it into the Garden Wing package. But given how it’s printed in black and white (please, take screenshots), I find it hard to believe it won’t be honored. At the very least, you’ll probably be entitled to a full refund.

If the package is for real, you’ll be staying in a Garden Wing room while enjoying Valley Wing benefits– kind of like what I did back in February this year. Having stayed in both, I can confidently say that the Garden Wing is the nicer of the two, with newer fittings and balconies for each room.

For perspective, it’s very rare to see the Shangri-La Valley Wing ever go below S$450 nett, even with all the promotions we’ve had over the past six months. 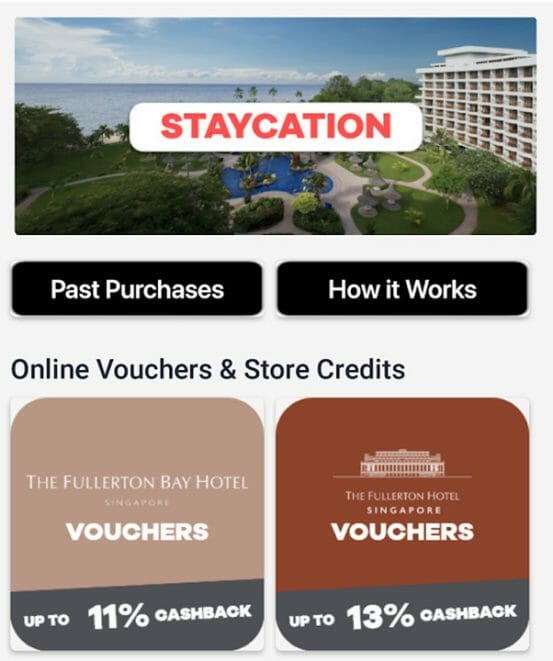 The ShopBack app is currently selling staycation vouchers for The Fullerton Bay Hotel, Fullerton Hotel and Hotel G with up to 13% cashback.

Some interesting offers include a Deluxe Room at The Fullerton Bay Hotel with a complimentary one-category upgrade, breakfast for two, an S$80 F&B credit and 6 p.m check-out. Vouchers are valid for Monday to Thursday stays up till 31 October 2021, and after 10% cashback, your total cost is S$522 nett.

If you want a view of Marina Bay, book a Premier Room package for S$570 nett (after 11% cashback), which includes a one-category upgrade to a Bay View Room and similar inclusions as above.

Hotel G is offering a S$141 nett (after 10% cashback) package for a Good Room with breakfast, S$50 F&B credits and 2 p.m check-out. However, they’re also running frequent 1-for-1 deals on Klook and Trip.com, so you’ll want to comparison shop and see which one suits you more.

S$373 nett for a Shangri-La staycation with Valley Wing privileges is an excellent deal, even if your room will be over in the Garden Wing (which could actually be a blessing in disguise). ShopBack was actually offering 19% cashback on this offer a few days ago, but it’s since reverted to 15%

If you’re planning to buy this, do back up your purchase with screenshots just in case.

The inclusion have since been changed unfortunately.

yup. but i’m seeing data points in the telegram group that shangri-la is honoring the bookings, which is fantastic!