The LuxxLounge is currently the only arrival lounge at Frankfurt Airport, and it's the very definition of utilitarian.

Those flying into Frankfurt don’t have many arrival lounge options on their hands.

If you’re flying First and Business Class on Lufthansa, or have HON Circle, Senator, Frequent Traveller or United Global Services status, you can visit the Lufthansa Welcome Lounge in the arrivals area.

For everyone else, there’s one and only one option: the LuxxLounge.

The LuxxLounge is located in the public area of Frankfurt Airport Terminal 1 (so it can be used by both arriving and departing passengers), between the B and C concourses on the Gallery level.

Opening hours are from 0630 to 2000 hrs daily. Access can be purchased at the door at €30 for a 3-hour stay, with discounted rates available for children aged 6 and below.

Dragon Pass is a notable exception.

However, those who access the lounge via a lounge membership pass will need to pay €10 to use the shower. That just strikes me as flat-out opportunistic, given how many contract lounges include shower access for free.

The LuxxLounge was fairly crowded when we arrived at 8.20 a.m on a Sunday morning, so I’m going to mix in a couple of official photos to showcase the interiors better.

The overall lounge is divided into two sections, with all armchair seating and just a single cocktail table in a corner. There’s no dining tables available, so you’ll have to hold your plate in your lap or else eat at knee level.

The decor is…well, it’s not going to win any interior design awards. It’s as utilitarian as it comes, reminiscent of something out of the 1990s. It’s hard to believe that this used to be an Admirals Club back in the day, prior to American Airlines moving to Terminal 2.

All in all, definitely not a place you come for the ambiance.

Self-serve buffets have returned in Germany, and based on my previous visit to Munich, the SOP is to wear gloves and masks when approaching the buffet line. The LuxxLounge required the mask, but no gloves- quite a surprise.

Despite the early hour, the wine selection was already out. One red, one white and one sparkling option, none of which cost more than $10 as per Vivino.

We’d just stepped off a 13-hour flight, and the showers were the real reason why we were here. I mentioned earlier that there’s a €10 charge for the shower if you’re accessing the lounge via a membership programme, and I’m still sore about that (the fee used to be €5, but somewhere along the line they saw fit to double the price). They’re already earning money from the lounge pass issuers, is it really necessary to squeeze passengers too?

It’s not like the shower rooms were fantastic either- dimly lit and similar to what you’d find in a cheap motel. At least they were clean, and the water pressure was passable. The temperature took ages to adjust, starting on scalding and taking about five minutes to cool to acceptable levels. 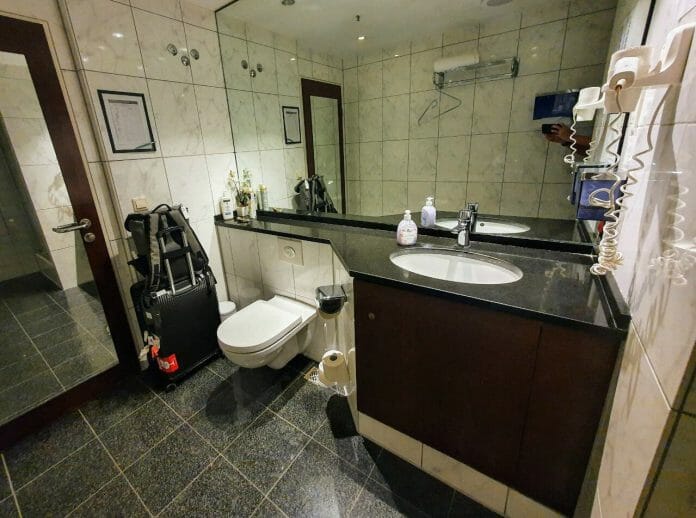 A set of towels and wall-mounted soap and shampoo dispensers are as fancy as it got with regards to amenities.

Finally, do note there’s only two showers available, so you may face a bit of a wait during peak periods.

Despite the name, there’s nothing lux about the LuxxLounge at all. It’s an old, tired facility whose raison d’être is to give arriving passengers a place to shower before heading out of the airport.

It speaks volumes that the lounge desperately tries to barter for 5-Star reviews. I approached the counter about printing a document, and was told that I could either pay 20 cents per sheet (or something like that; I can’t remember the exact amount), or leave them a good review on Google. 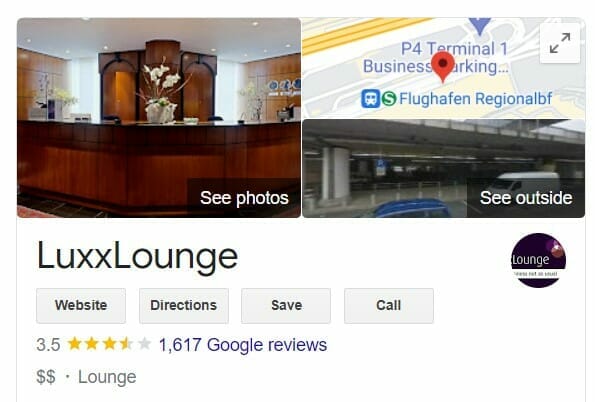 If you think a shower on arrival is worth €10 (and you’ll be surprised how much you value one after stepping off a long haul flight), by all means pay the LuxxLounge a visit. However, there’s little reason to stay on after that.

Aaron Wong
Aaron founded The Milelion to help people travel better for less and impress chiobu. He was 50% successful.
Previous article
VTL: Denmark adds quarantine requirement for travellers from Singapore
Next article
Amaze offering 2% cashback on all transactions (plus up to 4 mpd)

Did you collect your check-in luggage before accessing this lounge? An issue which always bugs me whenever I am tempted to use an arrivals lounge is what will happen to my check-in luggage if I don’t get to the carousel in time and it is taken off.

yes, it is in the public area of the airport, so you’ll have collected luggage and cleared immigration already

Does that mean if you have unlimited visits you can keep using the lounge facilities?

perhaps because i have a good memory of the flagship lounge in JFK. all the bollinger you could chug…

Actually the Lufthansa Welcome Lounge is already reopened since Nov 8 and is definitely way better than this lounge (and shower is also for free). But one has to be on a Lufthansa intercontinental flight

good to know, thank you!

This lounge is not worth the money
you have to pay to get in.

I have used MANY PP lounges
and this one gives the least value for money
of them all.
In addition its situated on the land side
which means you have to leave approx 45 min prior to boarding time to get through security etc.
Arrived from Vienna and will shortly continue to Bergen – so I left the lounge 45 min ago
after my first and last visit –
NEVER AGAIN