Thailand Pass holders entering under the Test & Go scheme after 15 January face an anxious wait, while Koh Samui will reopen from 11 January as a Sandbox.

Last month, Thailand announced that it would suspend new applications for its quarantine-free Test & Go scheme, and close all Sandboxes except for Phuket.

This marked a major setback for its reopening plans, although travellers with existing Thailand Passes could still enter under their original scheme (with an extra free-of-charge PCR test on Day 6 or 7 for Test & Go visitors).

The authorities have now decided to continue the suspension of Test & Go, although there’s a bit of a kerfuffle as to what happens to existing Thailand Passholders:

It appears the latter interpretation is correct- as of today, a decision has yet to be made regarding the fate of existing Thailand Passholders. Those holding passes for entry until 15 January should be safe, but those with entry from 16 January onwards will be in for a nerve-wracking week.

What we do know for sure is that from 11 January 2022, Thailand will reopen Sandbox applications for travel to Krabi, Phang-Nga and Surat Thani (which covers Koh Samui, Koh Pha-ngan and Koh Tao). These will join Phuket, bringing the total number of Sandbox locations to four. 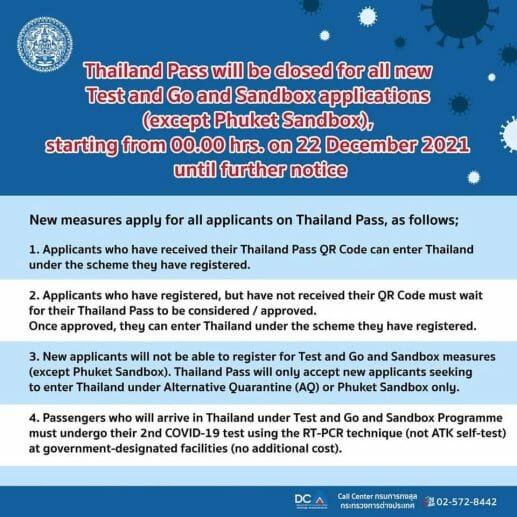 On 22 December 2021, Thailand suspended new applications for its Test & Go scheme. However, it reassured existing Thailand Passholders that they would still be able to enter under the scheme they originally registered.

Travellers who have already received a Thailand Pass QR code (approximately 200,000 applicants) will be allowed to enter Thailand under the existing conditions of the scheme they have registered

For example, if your Test & Go Thailand Pass was approved on 18 December 2021 for entry on 30 January 2022, you’d be able to enter Thailand quarantine-free as originally planned.

Test & Go passes will continue to be suspended, but what’s ruffling feathers is the prospect of a 15 January cutoff date. Local media initially reported that all Thailand Passholders needed to enter Thailand by 15 January 2022.

Dr Taweesilp said the CCSA agreed to prolong the suspension of the Test & Go one-quarantine-night-only entry programme until further notice, with Jan 15 the last date for all pre-approved arrivals.

But the ever-reliable Richard Barrow (if you’re planning a Thailand trip, you need to follow this guy) has since secured the following clarification.

The CCSA later clarified that for now, existing Thailand Passholders can enter as originally planned.

Of course, all this means is that no decision has been taken yet. It’s completely possible that they subsequently decide on a 15 January cutoff, which would be bad news for anyone planning enter from 16 January onwards.

In the meantime, Richard Barrow has also said that those who wish to bring forward the date of their entry into Thailand (as a precaution, should the cutoff materialise) can write in to the following email addresses:

This is a special concession; remember- by right, the entry date on a Thailand Pass can only be moved up to 72 hours after the original date of entry (presumably to cater to flight delays), and all other changes require a fresh application (which can’t be done right now).

So the tl;dr is that anyone who planned to travel to Thailand under Test & Go on or before 15 January 2022 is safe, but it remains to be seen what happens after that.

Uncertainity about Test & Go aside, what’s known for sure is that from 11 January 2022, Krabi, Phang-Nga and Surat Thani (consisting of Koh Samui, Ko Pha-ngan and Ko Tao) will be added to the Sandbox programme.

This allows fully vaccinated travellers to enter quarantine-free, but does not allow them to travel freely outside their Sandbox zone until Day 7.

Here’s a summary of travel requirements under the Sandbox programme:

It sounds like a lot of steps, but most of the work is pre-arrival. Once you’re there, you just need to remember to take the additional PCR test on Day 6 or 7.

A detailed rundown of Sandbox requirements can be found here.

Travel from Singapore to Koh Samui

Bangkok Airways offers the only non-stop flight between Singapore and Koh Samui, with PG962/961 operating 3x weekly on Sundays, Mondays and Thursdays (SilkAir used to serve this route, but has suspended it after merging with Singapore Airlines)

PG962 offers the most convenient way of getting to Koh Samui, provided you don’t mind wasting the first night (although since you’re confined to your room until the PCR results come out (6-8 hours), another way of viewing it is that you’ll be ready to go from the following morning).

However, you won’t be able to take PG961 back to Singapore- at least if you want to enjoy VTL privileges. There is currently no VTL flight from Koh Samui; all of them start from Bangkok.

What’s not clear to me at the moment is whether you’re allowed to stay in Koh Samui for <7 days, and then take a USM-BKK-SIN flight where you don’t leave the transit area in Bangkok. I distinctly remember reading about “sealed routes” between Bangkok and Koh Samui operated by Bangkok Airways, so presumably such an itinerary would be possible.

I’ll be watching this closely, since I’m hoping to visit Koh Samui at the end of January. In fact, I found that you can book a combination of Singapore Airlines and Bangkok Airways flights directly on the SIA website; the itinerary below would cost S$617 per person. 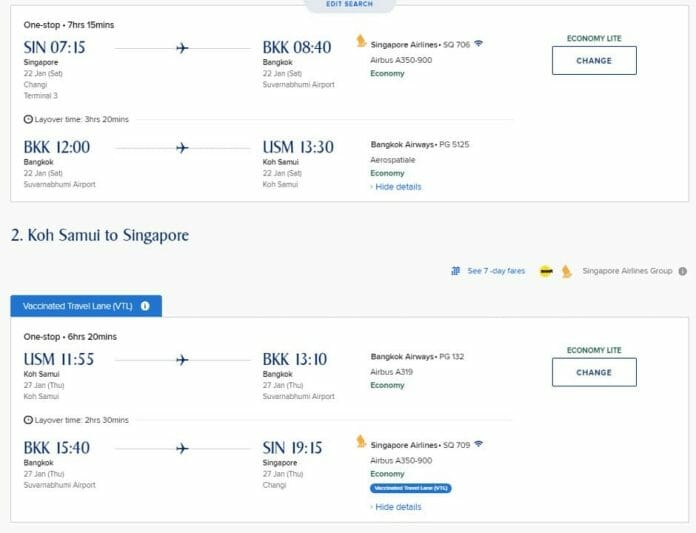 From what I understand, all bookings need to be on a single itinerary, so you can’t redeem a SIN-BKK ticket on Singapore Airlines and pay for a separate BKK-USM ticket on Bangkok Airways.

Stay tuned- there’ll be a trip planning post soon if all works out!

Thailand will continue to suspend the issuance of new Test & Go Thailand Passes indefinitely, and is mulling a 15 January deadline for entry. While nothing’s set in stone yet, it is possible that anyone with a Thailand Pass for entry after this date may find themselves having to cancel their plans (or face quarantine on arrival).

The good news is that Koh Samui will soon be opening up under the Sandbox programme, and while I really wish there were a VTL flight to Singapore, this is as good as it gets for now.

Aaron Wong
Aaron founded The Milelion to help people travel better for less and impress chiobu. He was 50% successful.
Previous article
Hilton Dine Like A Member: Up to 25% off F&B and 500 bonus points
Next article
GrabRewards Flash Sale: 30% pointsback on selected rewards

Any chance of Bangkok Sandbox?

Hope that’s the case too. People getting whiplash from all the will they wont they going on.

It would be ideal if there was an option to take PG962 from SIN to USM, enjoy 7 days at the Conrad, then return USM-BKK-SIN on SQ VTL … I for one would book! Let us know how your plans work out / what is possible!

actually that’s one of the things I’m considering too, depending on how the one-way pricing turns out. but i dislike the idea of wasting the first night at the conrad, since it’s so pricey…

Under the old sandbox rules you could switch hotels up to 3 times. So you could do first night in a cheaper hotel, then move to a more luxurious hotel. But remains to be seen what the new rules are.

What on earth if this meant to achieve? I’m sadly becoming used to cretinous policy making in Singapore, but it seems it’s a South East Asia-wide stupidity syndrome.

Get vaccinated, take a test, get on with your life. Anything else is pandemic theatre. Jokers.