PSA: Why your Amaze Card refund won’t go through

Expecting a refund on your Amaze Card? It might bounce depending on how the merchant processes it. Here's my experience.

I’ve said before that Instarem’s Amaze Card is a fantastic product to have- when everything goes smoothly.

Even with the latest nerf to its cashback rewards programme, Amaze cardholders still earn 1% cashback on overseas transactions, basically for free. This, stacked with zero FCY transaction fees and 4 mpd from the Citi Rewards or DBS Woman’s World Card, makes it hands down the best option for overseas spending.

But once there’s issues with a transaction, things can go south very quickly. I’ve already written about my very frustrating experience disputing a fraudulent transaction, and now I’m dealing with a separate matter of a refund that just won’t go through.

To be clear, this probably won’t happen in the vast majority of cases, but if you’re encountering a refund that keeps bouncing, this is probably what’s going on.

I’ve refunded Amaze Card transactions several times before, and they’ve typically gone off without a hitch. You may not always get back the exact amount you spent, but unless there’s been some dramatic currency exchange movements in the intervening period, it’s more or less a wash.

In case you were wondering, Amaze sends the refund to the original credit card that was charged, not the card you happen to have paired with Amaze at the time the refund comes through.

However, I’ve recently encountered another transaction that’s turned out to be a lot more complicated.

I’m heading to New Zealand in May as soon as the border opens up, and have spent the past few weeks making various hotel and activity bookings. I also booked a rental car with a company that requires full payment at the time of booking, but offers a full refund for cancellations made at least 24 hours in advance.

I decided to cancel this booking, and on the same day received the following alert from Instarem. 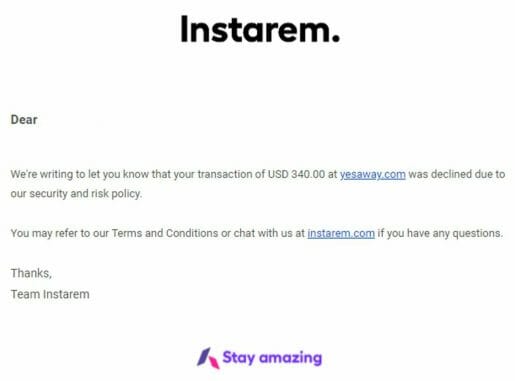 We’re writing to let you know that your transaction of USD 340.00 at yesaway.com was declined due to our security and risk policy.

You may refer to our Terms and Conditions or chat with us at instarem.com if you have any questions.

I contacted customer service to ask what was happening, and was told the following:

The transaction ID xxxxxxx is reflected as an original credit transaction and as per our policies, we do not support such transactions with an Amaze card.

An original credit transaction is a transaction that enables direct transfers of funds to credit card users. We at Amaze only support refunds against a transaction and not a direct fund transfer.

If I understand this correctly, it means that the merchant, instead of cancelling the original transaction, opted to do a credit instead. This normally wouldn’t be an issue if you used a bank-issued credit card, but evidently goes against some policy set by Amaze.

I was further told:

In the meantime, you have an option to contact the merchant to refund via the correct method, i.e. settlement file and not a direct fund transfer

Leaving aside what the “right” way of doing it is, I’m now in the unenviable position of having to find someone at the rental car company who understands what’s going on. And should they happen to say “well, that’s just the way we process refunds”, then what?

What does this mean for tax refunds?

If it’s indeed the case that Amaze cannot accept direct fund transfers and only cancellations of the original transaction, what does that mean for VAT refunds?

As far as I know (and I might be totally off here), these aren’t an adjustment of a previous transaction by the original merchant. Rather, it’s a credit amount sent by the tax refund company- kind of like them sending you a cheque or paying you in cash, only it goes to your card.

So I’m confused as to why this is fine, but not credit amounts sent by the original merchant. Maybe someone who understands the payments industry better could enlighten me?

If your Amaze refund is bouncing, it’s probably because the merchant is processing it as a direct fund transfer, as opposed to a voiding of the original transaction. Unfortunately, Amaze customer service won’t help you out here, so it’s on you to reach out to the original merchant and work it out.

It makes refunds to bank-issued credit cards seem relatively drama-free by comparison, but then again they don’t come with zero FCY fees and 4 mpd…

Anyone else experienced a bouncing Amaze refund before? How did you get it sorted in the end?

To be honest, my global blue refunds have not come in to my Amaze card and they were submitted in mid of Jan. At this stage I’ve already given up on it

I used my Amaze credit card at a hotel for a “block” that they place initially to cover expenses for any food you might order. Still haven’t got that money back, even though the hotel has tried their standard procedure. Thanks, hopefully this context will help

LIL
Reply to  U M

I am having the same problem too for the preauth at a hotel.

Not exactly answers to the issue here. But sharing my experience with Global blue tax refund in Germany. When I present Amaze card to Global blue office in downtown Frankfurt for the tax refund processing, I was told by the staff that Amaze is a debit card and they cannot accept such cards for tax refund. So I gave them my usual bank-issued credit card instead, and the refund went through and into my credit card account without issues. This was in Dec 2, 2021. I am surprised to read that Amaze card was accepted for tax refund. Hmm…I am… Read more »

While I use amaze to spend overseas, I use revolut to receive VAT refund so that the credit refund can be encashed and does not offset the cc cashback/miles/points accumulated. I was hoping also for a favorable exchange rate but unfortunately global blue already converted to sgd before refunding to revolut, quite a devil

yeah, global blue’s fees are rather steep too. they do take their pound of flesh!

What do you mean that you use Revolut? You enter the revolut card details when requested?

Revolut will sidestep these problems and still benefit from the good exchange rate (i guess?)

It happened to me before, exactly like you. I cancelled a subscription to a VPN provider and they opted to credit the fund instead with Stripe as their payment processor. I got the same email as you, and after chatting with Instarem, they advised the same, which was to ask the merchant to use the settlement file instead. I contacted the VPN provider but they directed me to Stripe and it kept bouncing back and forth between them without any resolution insight. But magically, around after 1 week, the refund was reflected in my credit card. So I let the… Read more »

Some lesson learnt. Anything to do with deposits, pre-payment or non-transactional natured transaction to avoid on Amaze, as you may have so much to deal with i’d rather forgo that bit of Forex. Instant consumption should be the way. On another note, the correct term used to tell a merchant to reverse/cancel out the original charge is called Chargeback, instead they’ll attempt to perform a brand new transaction to ‘transfer’ money to your Amaze card. Not sure if it helps to raise ‘dispute charge’ for that particular *Amaze*XYZ transaction that’s charged to the underlying bank credit card so if the… Read more »

I was in Milan in March and can confirm that Amaze Card is accepted by Global Blue but not by Planet Payment (now I understand why). However, as the exchange rate applied for tax refunds is still crappy even for the Amaze card and given this clarification, would definitely not choose Amaze for receiving tax refunds going forward.

I was told slightly differently, which gave the impression that Amaze processes both types of refunds: “Currently, amaze covers the maximum refund option, which is commonly utilized by merchants for refund processing example refunding the amount by giving the auth code (Transaction ID) of the previous transaction in such cases the funds are credited to original credit or debit card. However, in case the merchant fails to share original auth code or does the direct/partial refund without auth code (Transaction ID) the amount will be refunded to the current linked card.” The first paragraph means cancellation and refund in full.… Read more »

just got back from Barcelona. I did get a credit back from the merchant on Amaze fwiw, a small amount that was over charged.

How does it matter? U pay ur bills to ur credit card anw,and its credited by that amount.

Hi, I can share my experiences with processing a refund when I got overcharged during a hotel stay.

Upon discovering this overcharged amount, I reached out to the hotel and they directly issued a refund for the amount to the amaze card. I was worried that the refund did not go through, but eventually, I did manage to get the refund back to my linked credit card without any issues!

I’ve received this email a couple times for Grabfood refunds. It was for $0.50 and $0.95 so I just counted it as a loss.

that would have ruined me financially

“If I understand this correctly, it means that the merchant, instead of cancelling the original transaction, opted to do a credit instead. This normally wouldn’t be an issue if you used a bank-issued credit card, but evidently goes against some policy set by Amaze.” If the merchant uses the direct credit method instead of refund, the credit amount goes to the linked Amaze card at that point (which may not be the original card). In a fraud case, the bank of the original card may not insist that the credit card user pays for the fraud first, ie the transaction is… Read more »

Hi Adam, did you manage to get your refund back in the end? I’m facing the same issue now too..

Hello, did you guys get back the refund in the end? I am facing similar issues from Instarem, had I known refund process is so difficult, I would have went with revolut or youtrip

How long does it take for the refund to show in Instarem’s app “activity” tab? I have a refund from the car rental (deposit) after I returned the car on late Wednesday but so far no updates in the Instarem app yet. Thanks guys!
!

Did you get your credit back in your paired credit card and Amaze?

I am facing this problem now. Still hasn’t got back the 15k baht deposit the hotel refunded. Apparently, they voided the original transaction but nope, I don’t see the reversal. Is it because my card happens to be locked when they reverse? 😡

I got my deposit back after I kept my card unlock for 2 days after emailing the hotel to contact their bank again.