From now till 30 June, get a Fullerton Bay Hotel staycation when approved for an AMEX Platinum Charge card and pay the S$1,712 annual fee.

American Express has launched a new welcome gift for the AMEX Platinum Charge, but unfortunately, it’s the weakest yet in my opinion.

From now till 30 June 2022, new AMEX Platinum Charge customers will receive a one-night stay in a Bay View Room at The Fullerton Bay Hotel upon paying the annual fee. This gift is described as being worth S$1,300++, but I guarantee you it doesn’t come anywhere close.

Here’s a summary of what new AMEX Platinum Charge cardholders can expect to receive, for applications up till 30 June 2022.

To be eligible for the welcome gift, cardholders must apply and receive approval for the AMEX Platinum Charge between 1 April and 30 June 2022.

The full annual fee of S$1,712 must be paid in the first statement, and cardholders must not have cancelled an AMEX Platinum Charge in the past 24 months. It’s fine if they hold or held other AMEX cards however (including the Platinum Credit Card or Platinum Reserve), since there’s no “new customer” requirement.

Within 12 weeks after paying the annual fee, cardholders will receive a voucher for a 1-night stay in a Bay View Room at The Fullerton Bay Hotel, which must be redeemed within three months from the date of issue.

I mean, look. The Fullerton Bay Hotel is a lovely property- I gave it a 5-star review when I stayed in September last year. But given the AMEX Platinum Charge’s cost of admission, I would expect at least two nights, or one night in a suite. As it is, the stay doesn’t even come with breakfast!

Moreover, it’s not worth anywhere near the S$1,300++ that American Express is quoting. Even if I book a weekend stay during the peak June period, a Bay View Room package (with S$350 of dining credits!) costs S$918++. 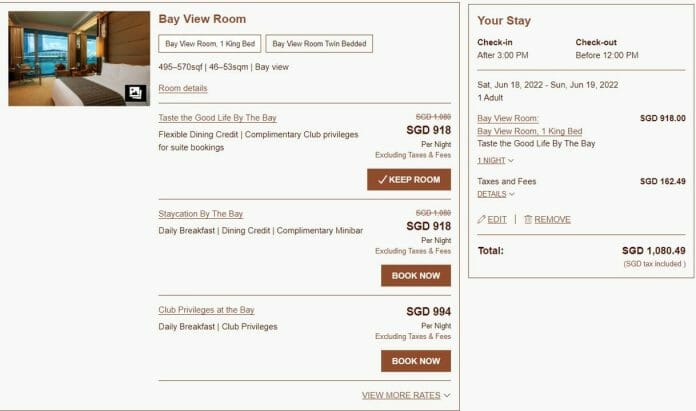 I’m guessing they’re basing the value on the rack rates, but even the most expensive rate I could find costs S$1,080++ at most.

Applicants who apply through The Milelion will receive a further 20,000 MR points with a minimum spend of S$5,000 in the first 3 months of approval (it’s basically the MGM programme). Do note that this is a reduction from the previous offer of 40,000 MR points.

Both of the above apply even if they already hold other American Express cards.

In other words, new cardholders who spend S$20,000 in the first 6 months will receive:

That’s a total haul of 120,000 MR points, equivalent to 75,000 miles with any of American Express’ transfer partners (remember: AMEX Platinum Charge cardholders can convert MR points to miles at 400:250, versus 450:250 for other Platinum cards).

Unless you really want a Fullerton Bay Hotel staycation, I don’t think this is the right time to pull the trigger.

Value may be subjective, but this to me is one of the weakest sign-up gifts we’ve seen in a while. What’s more, the resale value is questionable- how much would someone offer you for a Bay View Room without breakfast, given they could get a package with S$350 of dining credits, during peak season, for S$918++?

Moreover, AMEX has cut the number of points available to referees under the MGM. They’re now giving the referrer up to 60,000 MR points and the referee 20,000 MR points. I always appreciate more points, but I’d much rather they make the referee offer more attractive, because that pretty much sells itself.

American Express is offering new AMEX Platinum Charge cardholders a Fullerton Bay Hotel staycation upon approval and payment of the annual fee, plus up to 120,000 MR points with S$20,000 spent in the first 6 months.

It’s far from the strongest offer we’ve seen, so I’d advise you to wait on the sidelines until after June, when hopefully the offer improves.

Hi Aaron i am still struggling to use my $800 air credit and hotel credits and 3d2n Frasers voucher as I am only able to travel during school holidays where redemption tickets for other family members (5 of us in total) are either unavailable (esp business class) or absolutely poor value (1-2 cents a mile in economy). April is my anniversary month for renewal. Can you share what the renewal process is like and how I can drag out the process to buy time so that I can utilize my travel credits and not incur renewal fees. I also booked… Read more »

Check with Frasers. For the plat stay hotels, they do not need you to present your card when checking in. Only the voucher. But if you have any incidentals, you must pay with another AMEX card.

You can drag it out by cancelling on the statement due date which includes your annual fee.

Mix redemption with revenue tickets? Take different flights on the same or different days? Choose a different destination? My personal record was 1 F revenue, 2 F saver and 4 J saver on the same flight to Seoul.

Instead of throwing freebies to attract marginal users who are determined to use up every single voucher, AMEX should utilise its budget to make its existing cardmembers more loyal by improving its offering.

The many sign up gifts have not led to sustained increased in cardmembership. Instead, it has simply fueled rent seeking behaviour and membership churn.

Oddly enough when I went to the application page to key in income for the Plat charge card I noticed the lowest amount accepted by the system has decreased to $100k instead of $150k.

This seems to match up with Australia’s Plat charge income requirements. Could this be a signal that the rumored Optio card is coming out?

should just set a tier for existing card holders to hit and match, especially vs other cards…
1MR= 0.55mile…

Ex members should be parred and challenged…with that denomination tiered

Called the AMEX Telesales team. If I do not want the Fullerton Hotel stay, they can replace it with $300 CapitaMall vouchers. The acquisition welcome gift is really bad.