From 1 June 2022, DBS will add all Amaze transactions to its rewards exclusion list, ending the possibility of earning 4 mpd with the DBS Woman’s World Card (or any points with any DBS card, for that matter).

This was confirmed in an update to the DBS Rewards T&Cs posted yesterday afternoon, under point 2.6.

You can’t say it hasn’t been coming… 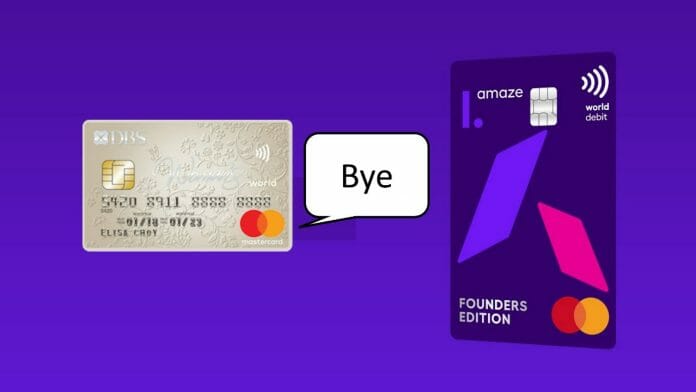 All Amaze transactions on the DBS Woman’s World Card posted by 31 May 2022 will continue to earn 10X DBS Points (4 mpd), as per normal.

From 1 June 2022, all Amaze transactions posted to the DBS Woman’s World Card will cease to earn DBS Points, period. The only benefit will be the 0.5% or 1% cashback from Amaze, plus the avoidance of DBS’s 3.25% FCY transaction fee.

Currently, the two best cards to pair with Amaze are, by a long shot, the DBS Woman’s World Card and Citi Rewards Card. This doesn’t mean they’re the only options (see below for alternatives), but they’re the most fuss-free thanks to their blacklist-not-whitelist approach.

So by holding the DBS Woman’s World Card and Citi Rewards Card, you could easily earn 4 mpd on up to S$3,000 of spending each month (remember, Amaze converts all transactions into online spend), with no FCY transaction fees and up to 1% cashback.

Given the increasing popularity of Amaze, it was surely only a matter of time before one of the banks decided to take action, but if I had to choose, I’d rather it have been Citi than DBS. That’s because the Citi Rewards Card has one glaring omission: you won’t earn 4 mpd on any transaction with a travel MCC.

This means that if you’re paying for any of the following, the Citi Rewards Card would be the wrong card to pair with Amaze:

It’s not the end of the world, since travel can be a bonus category for the UOB Lady’s Card, but its appeal is limited to half the population (or those with wives/girlfriends/wives and girlfriends), and UOB requires you to pick and choose your bonus categories (so selecting travel must come at the expense of some other category).

Which other banks exclude Amaze?

For the moment, DBS is the only bank with Amaze on its exclusion list.

UOB technically added AMAZE*TRANSIT* to its exclusion list back on 1 March 2022, but that’s not significant in and of itself. It simply means you won’t earn any rewards should you pair your Amaze to a UOB card and tap the Amaze for SimplyGo rides. All other Amaze transactions are kosher (for now).

But it’s very clear that Amaze is now on banks’ radars, and I’d be very surprised if it made it through the rest of 2022 unscathed.

What other cards can you use with Amaze?

As a reminder, Amaze can only be paired with credit cards on the Mastercard network, which leaves the following as the best alternatives to the DBS Woman’s World Card:

My new strategy going forward will be to:

These three cards should be able to cover most of my overseas spending, though there’ll definitely be more switching back and forth compared to before.

From 1 June 2022, DBS will stop issuing rewards points for all Amaze transactions. This gives you one last month to rack up some points, and thank my lucky stars I’m heading to New Zealand in May instead of June.

It’s not the end of the Amaze story, insofar as there are other cards which still give 4 mpd, but it’s definitely a sign of the times. To be fair, we knew that Amaze’s double dipping wouldn’t last forever. Opportunities come and go (remember Imagine?), so make hay while you can.

What’s your revised Amaze strategy going to be?

I have not received the bonus 9x points in April for Amaze spending in March. Just wondering if anyone still receives it?

I did receive the regular 1x points though.

i received on 17 Apr for March spend

hmm I’m curious, as the 9x bonus points for May only gets credited in June, does it mean that the May transactions will not get the bonus points then?

No. It’s depend on transaction post date, not points credit date. You will get the bonus point for post in May. But I believe the payment on 30 and 31 May will be post on 1 Jun or 2 Jun

Actually my travel expenses always not enough for the $2000 DBS limit and $1000 Citi limit. But I use it for the Foreign Exchange benefit

Amaze FX rate used to be identical to MasterCard official rate. In recent week its no longer – Amaze has started to take more spread.

Gutted! I’m heading to Switzerland for holidays in June and this change couldnt come at a worse time.

Having said that, what would be my best option now? I dont intend on getting the missus to sign up for the UOB lady’s card as I’m consolidating all the miles under my accounts. I do have the Citirewards Mastercard though.

Does it make sense to link UOB PRVI Mastercard to Amaze, just to avoid the 3.25% transaction fee and terrible bank forex, in exchange for 1.2 lesser miles?

Let me know your thoughts!

you’re really giving up 2.6 miles, since the prvi miles MC will earn 1.4 mpd on amaze trxns. that’s a very big opportunity cost in my opinion.

Ahh so if it were you, you’ll just use Amaze+CRMC, HSBC Revo, UOB VS and PPV in Switzerland? And after that’s burned through, switch to Amaze + UOB PRVI?

I guess using UOB PRVI direct for that additional 1 mpd wouldnt be worth it right?

Thanks Adam. Yes I intend to do that. But I bet I’ll burn through that $1k in no time, especially so in a country like Switzerland!

Once you hit the 4mpd cap for online transactions on whatever card(s) you have, the only reason left to use Amaze is for the cheaper forex rates. Pairing it with the UOB PRVI miles card:

Personally, I still think it makes sense to use Amaze. 1.2 miles is clearly not worth 3.25 cents.

UOB PRVI gives 1.4mpd with Amaze. So I guess it further strengthens your proposition to use Amaze + UOB PRVI.

1 mile in exchange for 3.25% and terrible bank forex doesn’t add up for me!

You have a source for that? Or just based on personal experience?

Personal data points. Feel free to test it yourself.

Yeah from my experience Amaze forex fees were almost zero when it first came out and have recently increased to at least 0.8% over market rates.

Just thought of something. Would it be also worthwhile to link UOB Krisflyer Card to Amaze to get 3mpd for dining at least? Assuming one has already hit the $500 min spend on SIA requirement..

how about pairing with SC unlimited cash back?

Hmm what happens to the later instalmets if I’ve split the amaze transaction into instalments to get the 6mpd?

You guys are overthinking things. The banks can combo block amaze next month and all your elaborate plans won’t mean anything. Just take the 4mpd for May and be done with this garbage card.

Any idea how this would affect the mp3 transaction that we have chosen for the 6mpd campaign?
Assuming all are Amaze transaction. April, May gets 6mpd Jun gets 4mpd?

It will not affect MP3 at all

Plus, easier to deal with hsbc and uob if there is any refunds etc.

Amaze with UOB is not really worth it.

I know that Citi doesn’t state MCC 4111 in exclusions list, and SimplyGo is excluded in their T&C if I use the Citi card directly. In that case, what if I use Amaze + Citi Rewards for SimplyGo MRT and bus rides? Does that earn 4mpd?

Aaron or others- Has anyone tried transferring forex eg GBP via Instarem app (where you get upfront charged in SGD), which is funded by a credit card such as DBS Woman’s card? The extra card fee is only S$7 vs using Paynow to fund the forex transfer.

If you use a credit card then the MCC is excluded from rewards by all banks and you will not get any miles (some treat it as a cash advance and charge additional fees). If you fund the transfer via the Amaze debit card linked to WWMC then the MCC is still excluded and the Instarem fees are higher.

Is Citi premiermile still able to earn mile when combined with amaze?

Same here.. i noticed that all my transactions from May 01,2022 up to now does not earn points.

Thanks. I was about to charge $2000 as a last hurrah – but it seems to be time to delete WWMC from the Instarem app.

Chill… There’s just a huge major delay ever since over the Labour / Raya long weekend..

My transaction done on 1 May, only received base points on 10 May

Digibot should be celebrating Raya still..

There’s no use case for carrying around the physical Citi Rewards card once you have paired it with Amaze right?

Just read it now. so i cant use amaze anymore because

1.nerf on WWWC
2.i gave ocbc titanium to my wife to spend on her own
3.i just cancel citi because i thought no use for me anymore.