The Oman Air Lounge in Bangkok punches above its weight for a Priority Pass lounge (and yes, there's even champagne!).

During my two-and-a-half hour transit in Bangkok, I had no shortage of lounges to choose from. Gulf Air passengers can access the Miracle Lounge at Concourse D, but Priority Pass holders have no fewer than 13 lounges at their disposal.

Now, Suvarnabhumi Airport is a big place, so you’ll presumably want to choose a lounge that’s close to your departure gate. 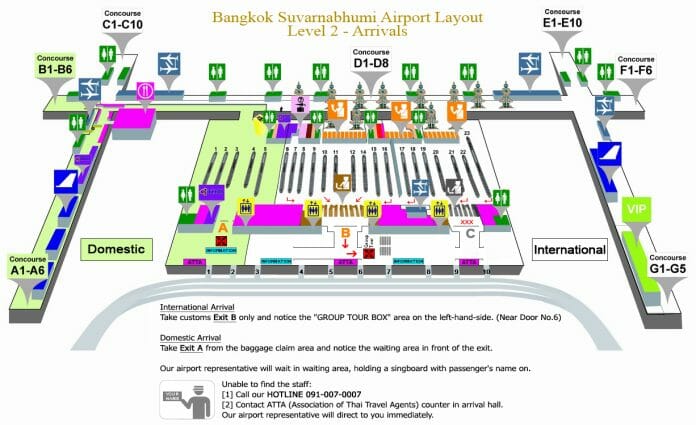 Gulf Air flights depart from Concourse E, where the Oman Air Lounge is located. Bangkok seems an odd place for Oman Air to operate its own lounge (though prior to COVID it served Bangkok with 3x daily flights), but having visited and seen what’s on offer, I’m certainly not complaining!

The Oman Air Lounge in Bangkok is located on Level 3 (West Side) at International Concourse E, and is open 24 hours daily.

Other passengers travelling on Oman Air may purchase access for THB1,500 (this rate is from 2018 and may have changed since). That’s approximately S$60, so even if you’re out of free Priority Pass visits, you’re better off paying the additional guest rate of US$32 (S$44).

At first I thought that Oman Air was only admitting lounge pass holders on account of COVID and the need to further monetise the space, but apparently Priority Pass access has been available since before 2017.

The Oman Air Lounge in Bangkok opened in December 2011, and underwent a refurbishment in mid-2019. However, this refurbishment focused on electrical wiring issues, and the lounge looks almost identical to the day it opened.

It’s a relatively small facility, with capacity quoted at just 40 passengers (though I could have sworn I counted more seats than that). The interior is beige and cream coloured, creating a decidedly dated feel. That said, the furniture is in reasonably good condition, without the stains and scars you’d expect from a prolonged tour of duty.

Unfortunately, most of the seating is couch and armchair style, with tiny coffee tables. This makes dining a tricky affair. There were only two alternative options: a high table at the rear of the lounge where a pair of iMacs and an ornamental fruit bowl were already occupying most of the table-top space…

…or a single dining table, located near the toilets.

There’s a separate section of the lounge which is sometimes sealed off for First Class passengers, though the distinction is rather arbitrary since you’ll be taking food and drinks from the same buffet anyway.

Here’s where you’ll find a pair of daybeds, separated from the rest of the lounge by blackout privacy curtains. A plastic-wrapped blanket was provided, but I was really expecting to see some disposable pillow cases as well.

Wi-Fi speeds in the lounge clocked in at around 11 Mbps down and 9 Mbps up, which isn’t mind-blowing by any means but fast enough for everything except HD video streaming.

One key weakness of the lounge was its lack of power outlets, an almost unforgivable oversight in this day and age. The only ones I saw were at the high table with the iMacs, and the lounge’s only dining table (so if both these are fully occupied, good luck).

Some outlets were universal with USB charging ports, and the rest were compatible with Type A, B, C and O plugs (which covers US and Japan, but not Singapore).

Complimentary printing was available for all guests.

When the Oman Air Lounge in Bangkok first opened, one of the hyped-up benefits was a menu created by chefs from the luxurious Dusit Thani Hotel.

Well maybe that’s how it started, but here’s how it’s going…

Don’t get me wrong- it was actually pretty decent, but luxury hotel food it isn’t. There were a few Thai dishes, a token pasta dish, and a smattering of Arabic options like hummus and labneh.

It’s the drinks selection that’s much more impressive, and I’m just going to come out and say it: I think the Oman Air lounge may have the best beverage selection in all of Bangkok Airport (even better than the Thai Airways Royal Orchid Prestige Lounge!)

First up, the wine fridge. There’s an extensive selection to choose from, including:

And Champagne Lombard makes a rather good champagne too, if you don’t mind me saying. I’m partial to very dry wines, and extra brut is as dry as it gets (well, just shy of brut nature)

The spirits selection is equally impressive, with everything you’d need to make all manner of cocktails and then some.

There were also soft drinks, juice, and cans of Heineken and Singha beer.

Coffee comes from Nespresso pods, though unfortunately they’ve gone cheap with the tea by offering Dilmah and Lipton.

A separate refreshment area can be found near the slumberettes, with another Nespresso machine, bottled water, fruits and some desserts.

The Oman Air lounge has its own gender-segregated toilets and a single shower room.

Water pressure was acceptable, with both an overhead and hand shower.

Staff in the lounge were warm and welcoming, and service was on point. As soon as a guest left, his or her area was cleared and wiped down. The lounge attendant even came up to give me a new bottle of mineral water when she saw the one on my table was empty. I also spotted them nipping into toilets after guests had used them to make sure everything was clean and tidy.

The Oman Air Lounge in Bangkok is a step up from most Priority Pass lounges, and probably my pick of the lot. I can’t deny that the presence of champagne probably clouds my judgment (in more ways than one), but that aside it’s got a decent buffet, clean toilets, and two slumberettes for a power nap.

I will say, however, that there are other lounges better suited for work. If you have a backlog to clear, my recommendation would be grabbing a meal here before relocating elsewhere for serious productivity.

Thoughts on the Oman Air Lounge in Bangkok?

The Champagne is a brand new addition! Was there on May 3rd and it was a sparkling brut and sparkling rose.

Actually, I visited on 11 Feb and champagne was there too- it’s just that I got around to writing after a 2nd visit on my recent trip last week. Maybe luck?

How do the different lounges at BKK compare? Which would you recommend in general?

The best lounge i have ever been