With a flight time of just 70 minutes, Singapore to Jakarta is the shortest SIA route with First Class. And what a fun 70 minutes that is.

Do you need a First Class cabin on a 70-minute flight?

Probably not, in the same way you don’t need a whole lot of other things. But that doesn’t mean it isn’t fun to have.

While Singapore Airlines used to offer First Class on routes as short as Kuala Lumpur, it eventually maxed out the cabin at Business Class on most short-haul routes. However, there were a handful of destinations which retained First Class service: Brunei, Jakarta and Manila. What did these three have in common? A critical mass of high net worth individuals too poor for private jets, but too rich for Business Class.

The COVID-19 pandemic saw Singapore Airlines pull all First Class inventory for a period, but thankfully that didn’t last long. First Class made a return in June 2021, and surprise surprise, Jakarta was among the first destinations to get it back. 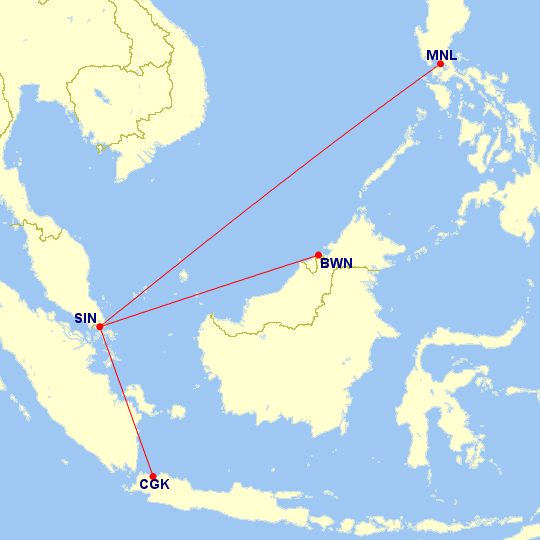 In fact, despite being the shortest of the three regional destinations which had First Class service prior to COVID, Jakarta remains the only one that’s had it restored. That says something about the profile of this market, really.

Now, you may think that spending 27,500 miles (30,500 miles post-devaluation) on a 70-minute First Class flight is the height of frivolity— you could book a 9 hour flight to Auckland in Economy for almost the same number of miles— but it might not be the worst-ever date night idea. Have an early wine and dine session in The Private Room, visit the First Class Lounge and laugh at the hoi polloi within, then have supper onboard the plane, with plenty of vintage champagne to wash everything down.

The question is: how good can First Class get on a flight this short?

With only four seats available, there isn’t much rocket science behind seat selection. If you’re a solo traveller, go for 1A or 1F. If you’re a couple, 1C and 1D.

1A and 1F were already occupied when I booked my flight, so I went with 1D. 1C turned out to be empty anyway, but even if it wasn’t, raising the centre privacy divider would have solved the problem.

I’ve already reviewed the First Class product on the B777-300ER, so refer to the posts below if you want a detailed rundown of the hardware:

Given how brief the flight was, I had so many questions. How would they fit a full meal service into a 70-minute flight? Would there be champagne (SIA deems the SIN-KUL route too short to offer champagne)? What kind of amenities would be offered?

The champagne question was answered immediately upon boarding. Pre-departure drinks have yet to make a return in Business Class (why?), but they’re still SOP for First Class. Singapore Airlines doesn’t offer its usual Dom Perignon 2008/2009 on the Jakarta route, replacing it instead with Taittinger Comtes de Champagne Blanc de Blancs 2007 (the same champagne served in The Private Room).

The other option is Krug, served from smaller 375ml bottles. I was under the impression that smaller formats cost more on a per unit basis, though they probably make up the difference through savings from less wastage. I’ve heard from a cabin crew member how much champagne is poured away on each flight, and it’s criminal…

Speaking of bubbly, the crew couldn’t have been more friendly. For reasons that I didn’t quite grasp (keep in mind I’d just come off a full day of eating and drinking in The Private Room), there were three inflight supervisors working the First Class cabin on this particular flight. I got three separate introductions and greetings, and they were all too happy to chat about plans for Jakarta (I mentioned I’d be there for less than 12 hours and it barely raised an eyebrow; apparently I’m not the first to do a Jakarta date night).

Along with the pre-departure drinks, the crew also distributed 330ml Evian water bottles.

To answer a few other questions:

The captain came on the PA to announce today’s flight time to Jakarta: an epic journey of 70 minutes. He mentioned, with a wry smile in his voice, that we’d hear from him again with a weather update in less than 40 minutes, just prior to landing.

We pushed back and took off on schedule, and as soon as the seat belt sign went off, the cabin crew sprung into action. 19 minutes of the flight had already elapsed, and the clock was ticking.

Meal service in First Class are usually two-hour affairs, but on this flight they’d have just under 30 minutes (factoring in the time needed to prepare the cabin for landing) to do the following song and dance: 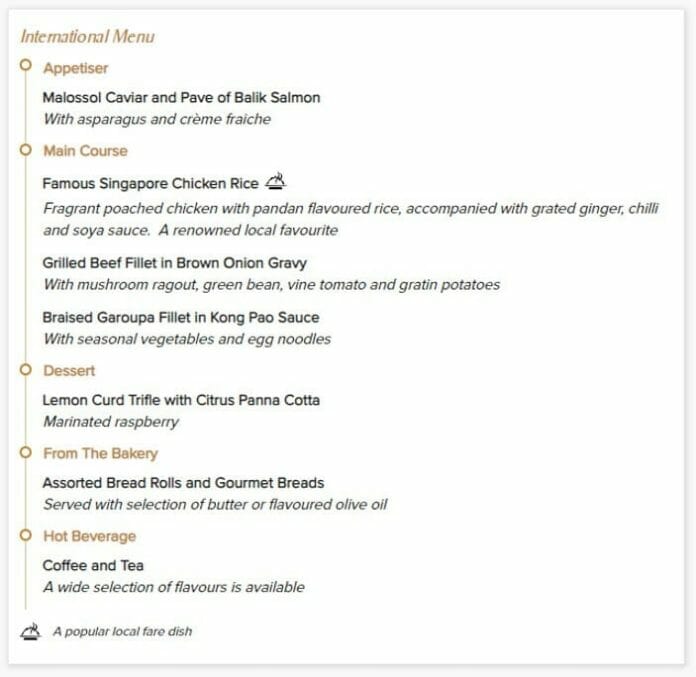 How would they manage to beat the clock? By tray service. In a rare (but understandable) deviation from First Class protocols, meals on the Jakarta route come on a single tray. The appetiser and dessert are served first, with the main course replacing the appetiser once finished.

Caviar is featured on the menu, and the standard service on Singapore Airlines involves a 30 gram tin of Gourmet House Oscietra Caviar, a mother-of-pearl spoon, blinis, and all the usual accompaniments.

However, the caviar on this flight was more of a dressing than a main event. This would be more accurately described as a balik salmon salad (which KrisShop will tell you is considered to be the finest smoked salmon in the world) adorned with caviar.

For my main course, I pre-ordered something off the Deliciously Wholesome section of the Book the Cook menu: Aromatic Barramundi Stew, served with pearled couscous, sliced zucchini, toasted almonds and preserved lemon salsa. This item was created by COMO Shambhala, the Singapore-based wellness company that provides some of the amenities in the SilverKris First Class and Private Room lounges.

While the presentation looked a bit messy, the barramundi was moist and delicious. Lobster thermidor will always be a classic, but it’s great to have some lighter options too. It’s quite impressive that passengers had a choice of no fewer than three mains.

Despite the short flight, Singapore Airlines still stocks two white and three red options, as well as a port. And to think: on some short-haul “First Class” flights elsewhere in the world, you’d be lucky to get a glass of water!

Serving a meal on a flight this quick poses a unique challenge to the crew. They need to rush the meal service, without the passenger feeling rushed. It requires checking back often to see if the appetiser has been finished and the main course can be brought, but they disguise it well by bringing the Evian water bottle with them each time. That way, if you’re not quite ready they can always say “take your time” and top off your water glass, as if that was the only reason they popped by. There’s an art to it, and they do it quite well.

I finished the meal with about 40 minutes to go before landing, and paid a quick visit to the bathroom. Unlike the oversized Suites bathrooms provisioned on the A380, the First Class bathrooms on the B777-300ER are nothing special. In fact, if not for the special Lalique  Neroli amenities, you’d be hard-pressed to differentiate this from the Economy Class lavatory.

There’s barely enough time to catch an episode of a TV show, much less a movie. Still, First Class passengers on the Jakarta route are provided with the standard B&O noise-cancelling wired headphones, should they wish to try nonetheless.

I kept my eyes glued to the inflight map throughout, and in the blink of an eye, the crew were collecting glasses and gathering loose items for our descent into Jakarta.

We arrived at Jakarta Terminal 3 right on time, after which it was a long walk to immigration and the airport hotel.

I’d sleep for about seven hours, and wake up the next morning to repeat the whole process again, in reverse- just on Scoot this time.

With two top-notch champagnes, a choice of three mains and a full-flat bed (not that you’ll have a chance to use it), SIN-CGK is probably the most luxurious short-haul flight in the world. I’d rate it even higher than Emirates’ 40 minute flight from DXB-MCT, but only because they don’t offer the shower!

The crew make the best of the time they have, and most importantly: it felt like a short First Class flight, not a stripped-down one.

If your other half has a passport and a sense of adventure, this could very well be a fun activity to try over the weekend!

Aaron Wong
Aaron founded The Milelion to help people travel better for less and impress chiobu. He was 50% successful.
Previous articlePSA: The OCBC Titanium Reward’s 4 mpd cap is not what you think
Next articleUSA to eliminate pre-departure COVID-19 testing from 12 June

Dont the crew/pilots finish drinking the unconsumed alcohol? Seems like a waste to throw away.

No they’re not allowed to. Logically they should be able to I know, but allowing this opens a whole Pandora box of crew maybe opening more bottles than needed, or restricting pours to ensure there’s leftover etc. humans are humans

too many pitfalls if that were allowed. the best solution is to go around the cabin encouraging passengers to drink up (which the crew often do!)

TPR is for F and Suites

You almost said it yourself. Suites is the first class product you get on the A380.

Is there any difference between seat 1A and 1F?

not that i can discern. toilets are on both sides, so there’s no avoid that really.

1A is a bassinet seat. Other than that, no.

I asked for the Penhaligon’s in my last month’s trip. It wasn’t available. ;(

luck of the draw. some aircraft just have it stashed away somewhere, others don’t. I couldn’t get it on a recent flight to BKK

i am doing something similar but a bit more extreme than you. Out bound on MH Jtransiting in KL in the afternoon, inbound in SQ F. Its Singapore QR Lounge and TPR in 1 trip…..yum.

Watch your waistline! Lest you end up like me…

I understand the demand for SIN-CJK and SIN-MNL First Class seats, but who are the people flying first class on SIN-BWN on a regular basis? Don’t really hear of many people living in SG while doing biz in Brunei and vice versa…

Could also be operational – the flight time nicely fits in with the jet’s other long-haul day job. And the short flight likely is helpful to keep crew certified to min regulatory requirements.

They are now known as IFM – Inflight Managers

Great review Aaron! I’ll be doing this flight myself in October on my trip to Jakarta. No extra miles cost as I tagged it onto a Europe flight whilst the stopover trick is still allowed.

Just curious, how does it change the value proposition if one is indifferent to champagne/alcohol?