Get ready: What to expect at the reopened Changi Terminal 4

Changi Airport Terminal 4 will reopen on 13 September after a two-year hiatus. Here's what passengers can look forward to.

Changi Airport is buzzing once again, as each month brings with it more and more passengers. The launch of the Vaccinated Travel Framework (VTF) in April was a major boost, and with Singapore’s borders now fully open to unvaccinated individuals too, things are only going to get busier.

To support the recovery, Changi Airport Group (CAG) last month announced the reopening of T4 from 13 September 2022. This will add capacity for 16 million more passengers per annum, and end a two-year shutdown of Singapore’s newest terminal.

This week, CAG released further details about what passengers can expect when the doors open.

CAG previously shared the following relocation schedule for the various airlines moving to T4. This covers the vast majority of carriers that were at T4 pre-COVID, excluding those which have yet to resume flights to Singapore like Hainan Airlines and GX Airlines.

While Jetstar Airways was listed in the original press release with a relocation date of 25 October, the latest version removes all mention of it. That’s no doubt due to the ongoing dispute over its relocation; merely hours after CAG’s announcement, Jetstar issued a feisty statement declaring it had “no intention of moving”.

We are extremely disappointed that the Changi Airport Group (CAG) has chosen to unilaterally announce a plan to relocate the Jetstar Group to Terminal 4 at Changi International Airport, before any agreement has been reached….Until an agreement is reached, we have no intention of moving and have informed CAG of that fact.

Jetstar’s reluctance to vacate T1 is understandable, given how its business model relies on connections with other T1 airlines like Emirates and Qantas.

Relocation would present a significant inconvenience to connecting passengers because T4 is physically separated from the rest of Changi Airport, with no Skytrain service. This would mean longer Minimum Connection Times (MCTs), which are detrimental to how it banks its flights and utilises its aircraft.

But CAG has shown no intention of budging, and the airport and Jetstar are still “in discussions” about the move. It’ll be interesting to see who blinks first.

Cathay Pacific flight CX739 from Hong Kong will be the first flight to land at T4 on 13 September, with a scheduled arrival time of 1505 hours.

It will then return to Hong Kong as flight CX716, T4’s first departure, with a scheduled departure time of 1800 hours. Check-in for this flight will open at 1400 hours, giving passengers four hours to enjoy the terminal (Cathay does not participate in the Jewel early check-in programme).

Passengers flying on Korean Air flight KE646 to Incheon that departs on 13 September at 0110 hours should note that the flight will depart at T1. However, subsequent Korean Air flights that day will arrive and depart from T4, namely:

CAG has published a list of retail and dining outlets which will commence operations on 13 September. More shops will open progressively in the coming months.

I’m pleased to see that Changi Recommends will be among the first wave of reopenings, which will allow travellers to make use of the excellent Changi Travel Exchange- an airport moneychanger with comparable rates to downtown.

Changi Travel Exchange: An airport moneychanger that won’t rip you off

While Cathay Pacific has its own lounge at T4, the doors are likely to remain shut for the foreseeable future. The airline’s September schedule calls for just 3x weekly service to Changi, well shy of the nine daily flights offered pre-COVID.

T4 was never meant to handle connecting traffic, and as such, it’s geographically isolated from the other three terminals. 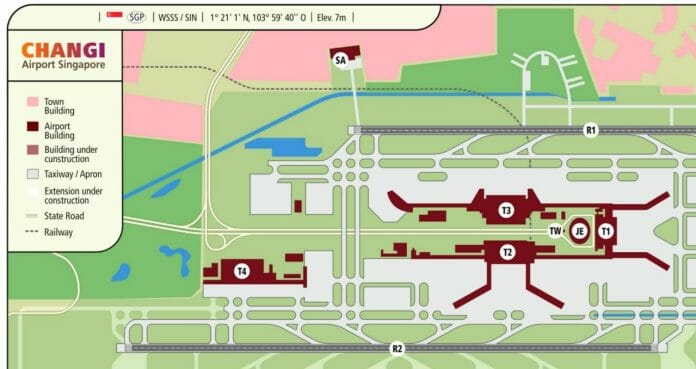 The planners didn’t believe a Skytrain service was justified, so a free shuttle bus is the only means of getting between T4 and the rest of Changi.

This will operate with the following schedule:

Prior to COVID, the wait time for shuttle buses airside was almost double, so this increased frequency is much welcome.

Changi T4 opened in October 2017, spanning 225,000 sqm and providing handling capacity for 16 million passengers per annum. It occupies the site of the former Budget Terminal (which I think Singapore policymakers would rather forget!), and though it was originally conceptualised as a dedicated terminal for low cost carriers, eventually pivoted to host full-service carriers as well.

T4 is big on automation, with the check-in and bag drop process fully self-serve, and immigration and boarding checks handled through facial biometrics. It’s meant to serve as a test bed for these concepts, ahead of the planned T5.

T4 is also the only terminal at Changi to offer centralised security screening (as opposed to individual screening at the various boarding gates). This means you can purchase liquids and aerosols in the departure area (or sneak a bottle of water from the lounge) and bring them onto the aircraft.

Passengers can look forward to attractions such as the Heritage Zone, unique art pieces such as Petalclouds and Travelling Family, as well as the “Steel in Bloom” garden. Those with kids can enjoy Chandelier, a play area with a 16-m high structure for climbing.

With just over one week to go before T4 reopens, things are shaping up very nicely indeed. It’ll be quiet at first with just Cathay Pacific and Korean Air, but should get a lot more busy towards the end of September.

I’ve only ever flown out of T4 once, and think I’m overdue for a return visit- though maybe only when the Cathay Pacific lounge reopens.

I could be waiting a while.

Anyone planning to fly out of T4 in September? Let us know about the experience!

We can’t wait to reopen the lounge too!

When will the lounge re opened? any information about the operational time of the lounge?

I don’t understand this standoff with JetStar. They are just tenants. On what legal basis could they refuse to move?

Probably none, which is probably why we’re seeing publicly a big hoo-ha.

I don’t think the CX lounge will ever reopen going by how CX is now hands-tied behind its back by the CCP (Hong Kong Branch).

I was a Covid-19 swabber during the pandemic, and did several shifts in T4. This place has a whole different meaning for me. It was completely shut, with only 1 set of restrooms open on the ground floor. Later it became a vaccination centre. Stationed in the carpark beside it, I thought of it as a dark, hulking neighbour, a symbol of how Covid changed everything. More relieved than glad that it’s open, and that there’ll be passengers in the carpark now instead of cold storage for swab samples. I will avoid T4 for now – it’s too far &… Read more »

Thank you for your service! Hopefully in time t4 can be a place of excitement once again

Do you have the detail about the operational hour of the Blossom Lounge? Thankyou very much