The full-fat Singapore Airlines experience on a short flight like Phuket is arguably overkill, but since when has that been a bad thing?

When flying home from Phuket, Singapore Airlines passengers have a choice of four daily flights.

SQ735 and SQ739 depart in the evening, allowing travellers to maximise their vacation time. I chose SQ735, since the 6.10 p.m departure time dovetailed nicely with the late check-out that AMEX Fine Hotels & Resorts bookings enjoy.

After a very pleasant visit to the Coral Executive Lounge, I headed to Gate 15 where boarding was just about to start. Priority was given to Business Class, PPS Club, KrisFlyer Elite Gold and Star Gold members.

All Singapore Airlines flights on the Singapore – Phuket route were operated by the B737-8 when I flew in August (they’ve been temporarily switched over to the B737-800 for September) which features the latest narrowbody Business Class flatbed seats. You might argue this is overkill for such a short flight, but I’m certainly not complaining!

A total of 10 Business Class seats are configured in a 2-2, 1-1, 2-2 layout. This arrangement means that only 60% of passengers have direct aisle access; those seated in 11A/K and 14 A/K will need to step over their seatmate to access the aisle. 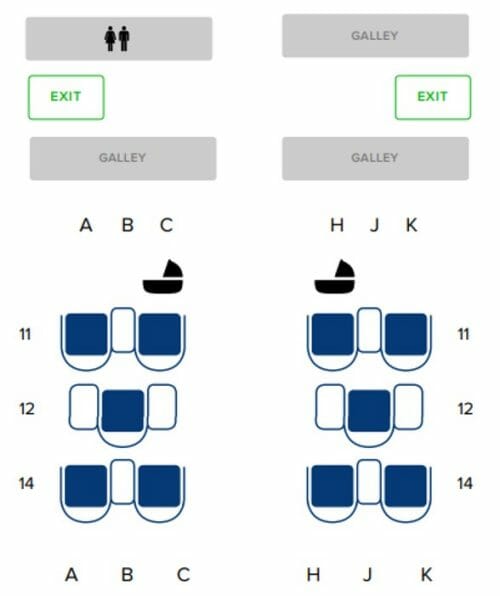 The Row 12 “throne seats” are obviously the big draw for solo travellers, due to their extra privacy and storage space, not to mention the lack of a seat mate.

I’ve previously reviewed the throne seat experience on a different flight (review below), so I decided to opt for Row 11 this time round. 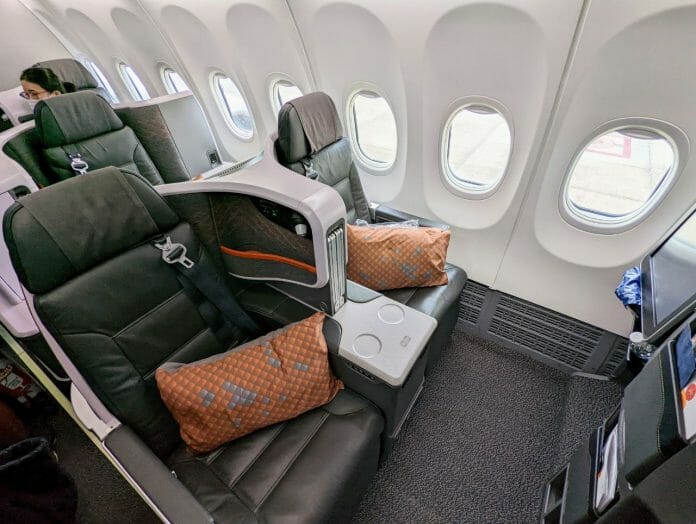 Row 11 actually has the narrowest seats in the entire Business Class cabin, because the footwell from Row 12 extends into the space between 11A/C and 11H/K. That cuts the width to 19 inches, versus versus 20 inches in Row 14 and 21 inches in Row 12 (remember: SIA row numbers avoid the unlucky 13). That said, I didn’t find it unduly snug, and it is possible to lower the armrest if you need extra space.

In fact, since we’re talking about snug, let’s talk legroom before you start envying the row 12 occupants too much. While the throne seats get all the attention, one thing that isn’t mentioned nearly as much is its tiny footwell- a problem for anyone without dainty feet.

I should also add that if you’re travelling with an infant, you’ll pretty much have to pick row 11, since this is the only place in the Business Class cabin with a shelf for a bassinet.

While storage space is harder to come by in Rows 11/13 than Row 12, passengers can store shoes in a cubby by the feet, and loose items in the pouch beneath the IFE screen.

The privacy divider between seats also has storage, with handsome orange stitching and enough space to store an iPad (despite the sticker, the cabin crew don’t actively enforce the no stowage rule). A USB charging port, reading light and earphone jack can be found here.

The tray table pops out from the privacy divider with a push of a button. It’s reasonably sturdy, if slightly smaller than expected. A 14-inch laptop would just about fit, though with minimal space to rest your wrists.

Seat controls are found on a touch-sensitive panel, with presets for full flat, full upright, as well as the option to individually control the footrest.

An inflight remote with button and touch inputs is inside the armrest. This controls the 16-inch high definition screen (also touch sensitive, but too far forward for easy pressing).

Noise cancelling headphones are provided to all Business Class passengers. The jack also supports your personal set, should you bring them along.

The captain came on the PA and announced a slightly shorter-than-usual 1 hour 40 minutes flight to Singapore, covering 607 miles. Shortly after, we pushed back from the terminal and did a short taxi to the only runway.

Phuket Airport is so close to the coast that you can see the beach on the climb out. In fact, Mai Khao beach has become a popular tourist attraction precisely for that reason, and it’s something of a mecca for plane spotters.

As soon as the seatbelt sign went off, the crew closed the curtains and got busy with dinner service. Phuket to Singapore is blocked at just 20 minutes longer than Penang to Singapore, yet passengers on this plane get a meal service (as opposed to just a snack from Penang). This means everything needs to move chop chop.

Singapore Airlines has restored physical menus in First and Business Class, a welcome change from the former digital-only set up. These are available on all routes, even short hops to/from Phuket.

For today’s flight from Phuket, the following items were available. 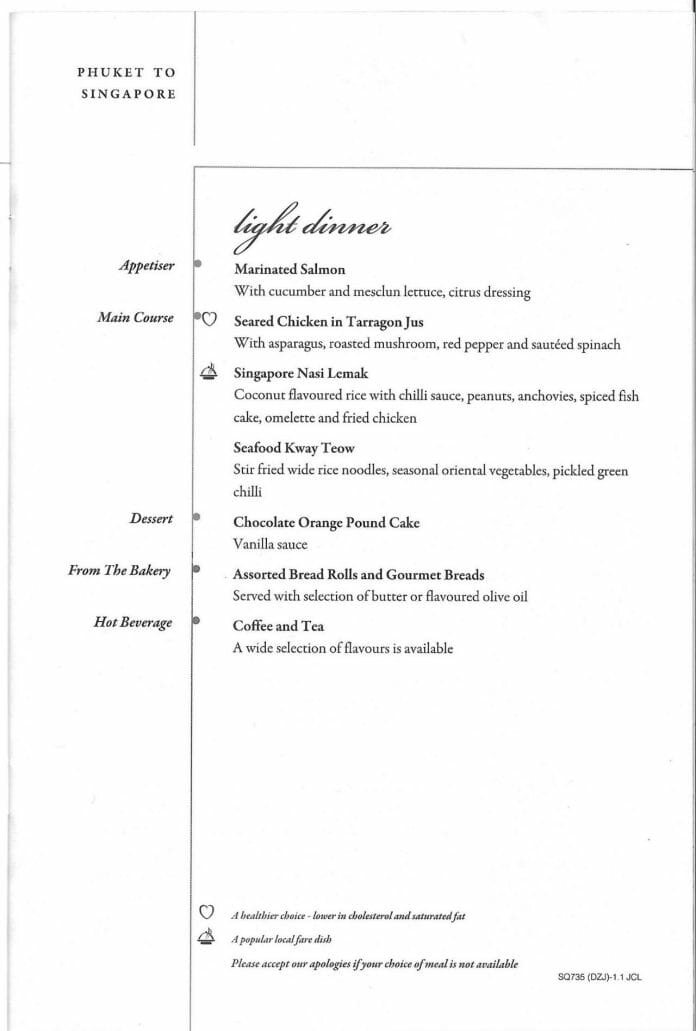 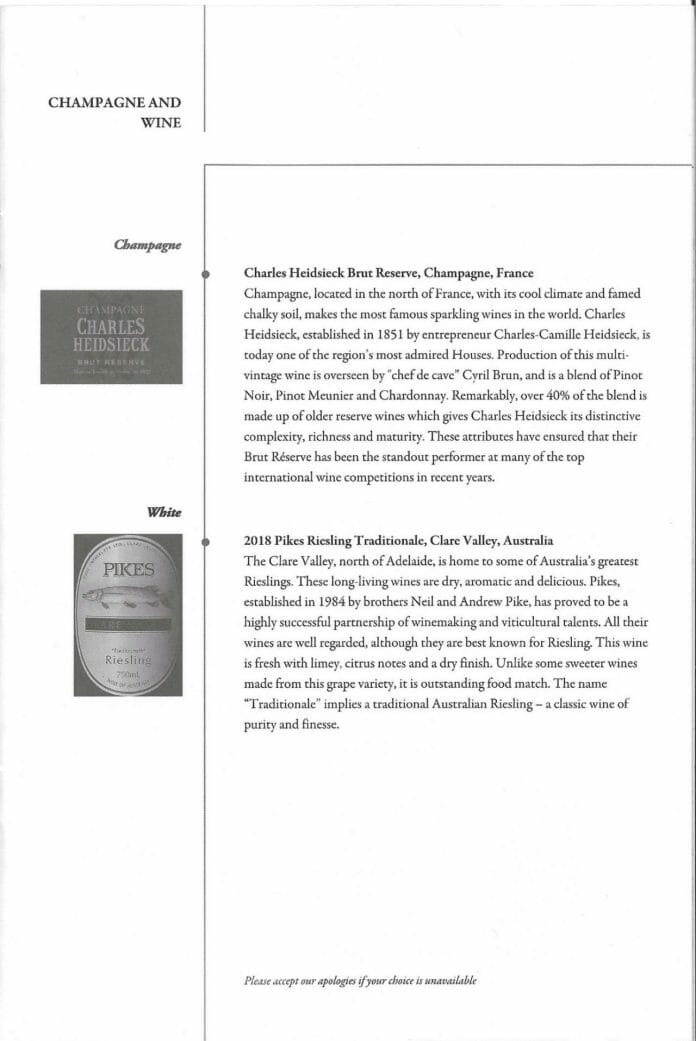 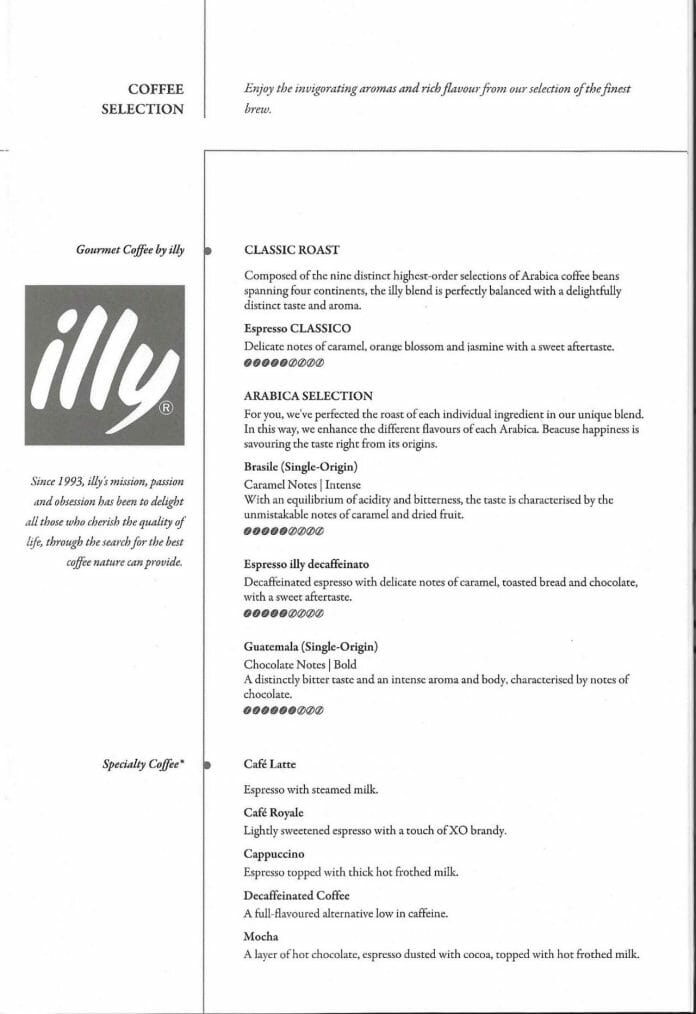 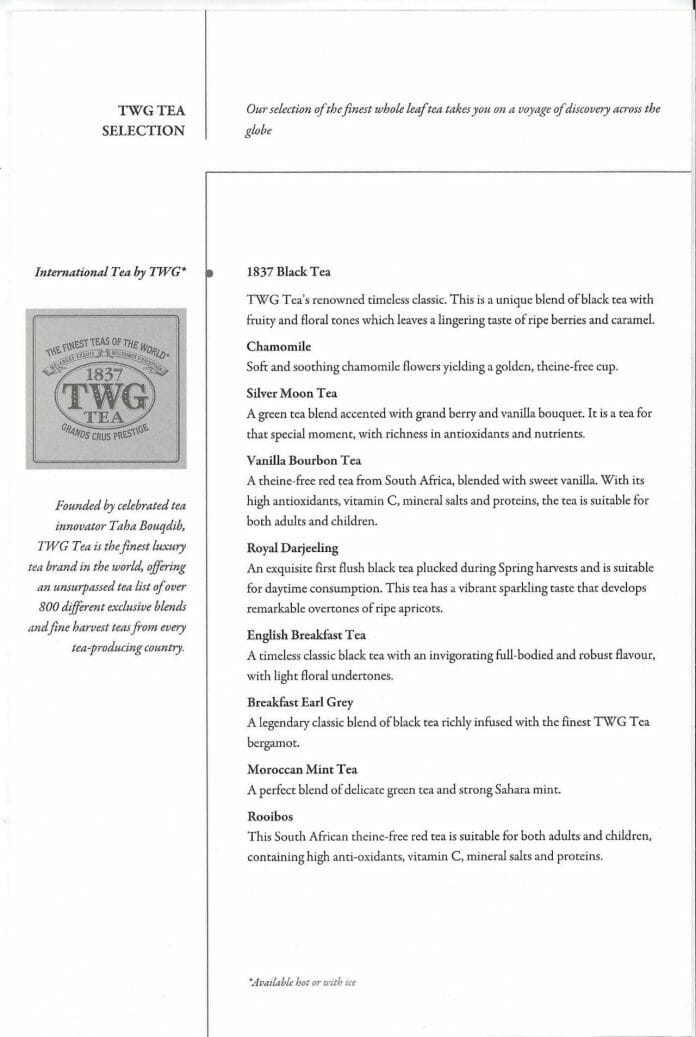 I opted to have the seafood kway teow, a favourite of The MileLion community. I can see why- the noodles came with a generous portion of seafood, and a hint of wok hey flavour. The kway teow still retained a bit of bite, and just the right amount of gravy. It was accompanied by a moist orange chocolate cake, and I didn’t expect one of the better airline meals in recent memory to come out of Phuket Airport, that’s for sure.

Remember Charles Heidsieck? This was Singapore Airlines’ default champagne until 2019, when it was replaced with Laurent-Perrier (to the chagrin of some oenophiles). The pandemic meant very few passengers actually encountered it, however, and the highly-rated Piper-Heidsieck Brut Vintage 2012 became the standard pour just in time for the VTLs in late 2021.

And now, Charles is back, at least on the regional routes. It’s not as highly rated as the Piper 2012, but I do enjoy the hit of nostalgia.

I wasn’t really in the mood to watch a movie, but did a quick spin through the new titles in KrisWorld for August. This included king of memes Morbius, as well as Nicholas Cage’s extremely meta “The Unbearable Weight of Massive Talent”.

There was just enough time for a quick nap, so I reclined the seat into bed mode. Singapore Airlines’ latest generation of Business Class seats have done away with the need to flip the seat, a decision I’m rather happy with. Having a free choice of incline is much more comfortable, plus there’s no need to stand up to do it.

While narrow, the sleep experience on the B737-8 is perfectly acceptable for the regional routes it’s meant to serve. I did luck out by getting an empty seat next to me, but do note that window passengers in Rows 11 and 13 will need to step over their seat mate to access the aisle.

Just before landing, I popped into the bathroom. If you were hoping that Business Class passengers might get more room than those in Economy, the answer is sadly no: this is exactly the same as what you’ll find at the rear of the plane. Still, they were kept spotlessly clean by the crew, and carry the same Penhaligon’s amenities you’d find in any SIA premium cabin.

We landed in Singapore right on schedule, parking at the far end of Terminal 3 (which seems to have become the default parking area for all the B737-8s).

Singapore Airlines’ B737-8 offers everything you could possibly need for a <2 hour flight to Phuket, and then some. A comfortable, flat bed seat, power outlets and Wi-Fi, plus a meal service with champagne- it certainly hammers home the difference between full service and low cost (a line that often gets blurred the shorter the flight is). 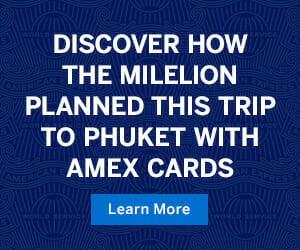 In fact, probably the only thing that could top this experience would be Singapore Airlines on a widebody jet, like the B787-10 or A350-900 regional (which can be found on high volume regional routes like Bangkok, Hanoi and Manila). I can’t deny the B737-8 feels cramped in places (especially the bathrooms), but that’s part and parcel of a single aisle fuselage.

Whether or not you need all those creature comforts on such a short flight is of course up for debate, but assuming you don’t mind spending the miles or money, I doubt you’ll walk away disappointed.

Aaron Wong
Aaron founded The Milelion to help people travel better for less and impress chiobu. He was 50% successful.
Previous article
Trust Link Credit Card Review: Too many emoji, not enough free rice
Next article
Get ready: What to expect at the reopened Changi Terminal 4

First world problems, but most disappointed that today (16 Sep) SQ has removed the 737 MAX on all flights serving HKT and we are back to the old recliner seats. So my opportunity to try the above product has gone for the time bring.