How to find award space to Tokyo on Alaska Mileage Plan

Japan looks set to reopen, but award space to Tokyo has vanished. Or has it? Here's how to find it with Alaska Mileage Plan.

If reports are to be believed, Japan is all set to scrap its daily arrival cap and visa requirements, and allow free-and-easy travel from October 2022 onwards. In anticipation of this, there’s been a flurry of interest in booking year-end trips. The first item on the itinerary? Flights, of course.

Singapore Airlines is hardly releasing any award space to or from Japan until later next year, but the situation isn’t entirely hopeless. Those making speculative bets on Japan’s reopening can turn to Alaska Mileage Plan instead.

The problem is: award space between Singapore and Tokyo has completely vanished.

Most people will know about the sweet spot for Singapore-Japan travel on Alaska Mileage Plan. Business Class awards cost 25,000 miles each way on Japan Airlines (and to think: at one point you could do it for 25,000 miles round-trip!), with no fuel surcharges.

Even better, Alaska Mileage Plan does not charge any change fees for partner awards, and if you ultimately decide you don’t want to travel, you’ll only be out of pocket the partner booking fee of US$12.50 (per award, each way).

However, if you search for Business Class award space between Singapore and Tokyo, the earliest you’ll find something is in April 2023!

That’s probably too long for die-hard otakus to wait, but here’s the solution: search for travel to cities other than Tokyo.

For example, searching for SIN-HND in November 2022 turns up absolutely nothing. But if I change my search term to SIN-KIX, all of a sudden awards become available! 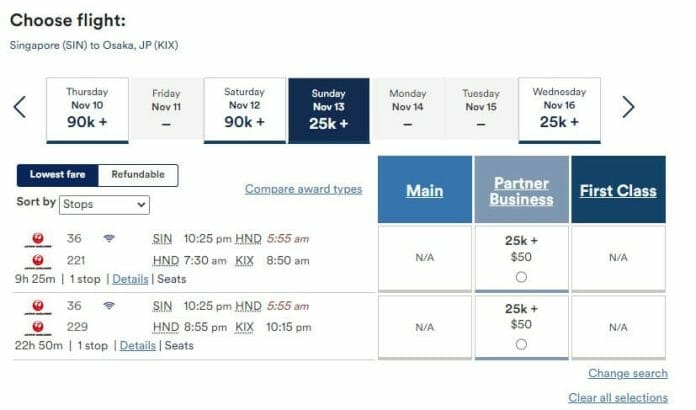 What’s going on is that Japan Airlines is applying married segment logic to its award space, which makes a route like SIN-HND-KIX possible, but not SIN-HND.

And just like that, a whole world of possibilities open up. I ran searches for several major Japan airports and observed the following. 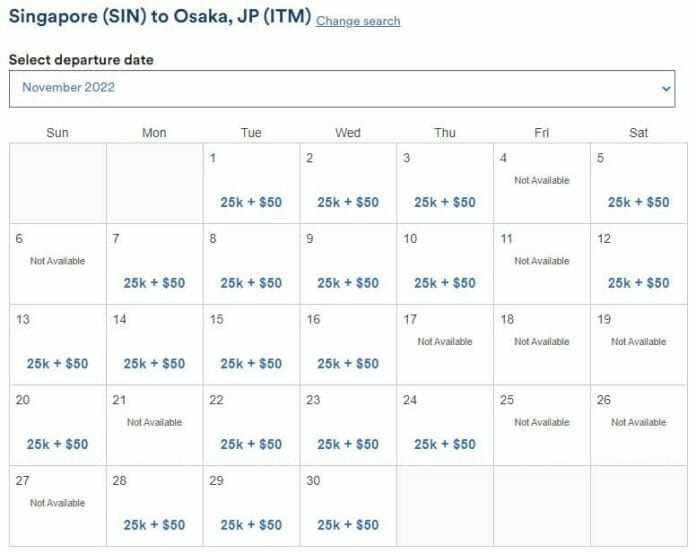 CTS is another good bet, with plentiful award space in November. In fact, its availability mirrors ITM, at least in the handful of months I looked at. 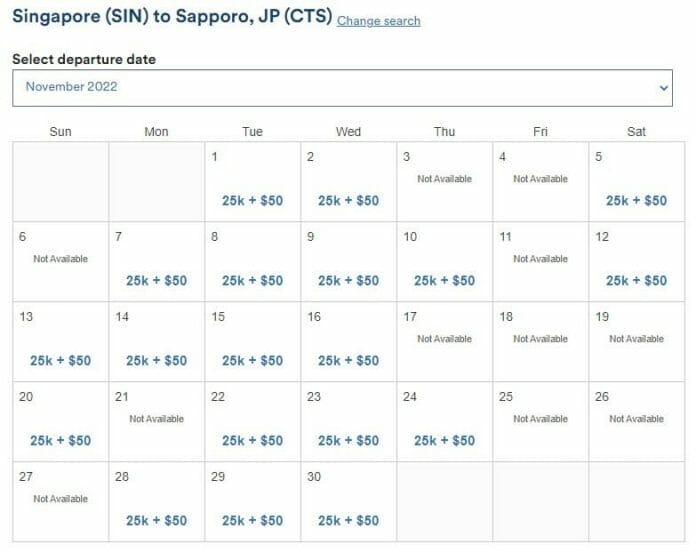 Don’t bother with NGO, as there isn’t a lot of award space to be found here. 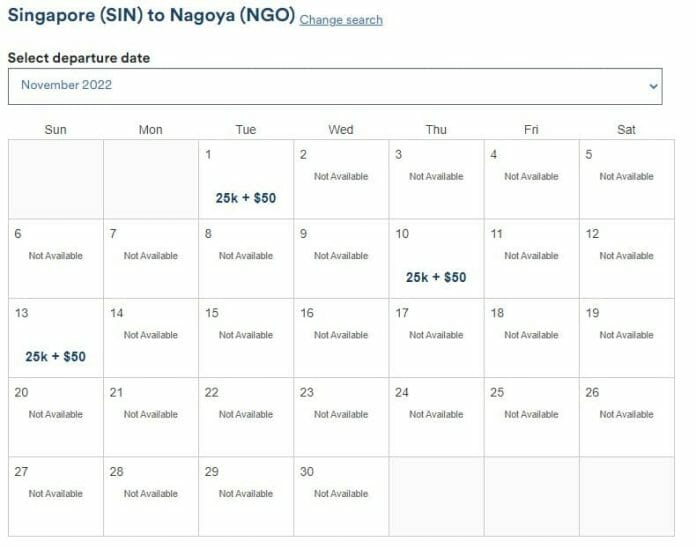 Can I skip the last leg?

I know what question this is leading to: can you redeem a SIN-HND-KIX ticket, fly to HND and skip the leg to KIX?

Yes, in the sense that no one’s going to force you to board the HND-KIX flight. You’re perfectly entitled to leave the airport at Haneda if you wish.

Luggage tends to be an issue with abandoning an itinerary halfway, but my understanding is that when entering Japan you need to clear customs at the first port of entry, which means you’ll collect your bag, clear customs, then proceed to the domestic terminal to re-check it. If that’s so, luggage shouldn’t be an issue.

There’s a few more caveats to point out:

So it’s certainly possible, but do it at your own risk and book a one-way ticket only.

Or…just enjoy other parts of the country! There’s more to Japan than just Tokyo, and some of my best meals came in Osaka.

As a reminder, Alaska Mileage Plan is currently running a bonus on miles purchases made up till 23 September 2022. The early bird bonus of up to 60% has now ended, but you can still get a bonus of up to 50% until the end of the sale period.

Do note that each person’s bonus will be different, and you may have been targeted for a smaller bonus that maxes out at 30-40%. Here’s the cost per mile at different bonuses:

Multiply that by 25,000 miles and add US$50 of taxes to get the cost of a one-way Business Class award to Japan.

Japan Airlines award space on the Singapore – Tokyo route may look like it’s vanished, but you can force it to appear by simply tagging on an additional flight to the end of your journey.

Whether or not you take that flight is your call, and if you choose to skip it, you should be aware of the limitations and pitfalls involved.

I do not have enough Citi miles, can you redeem for me?

I remembered when transferring from an arriving International to Domestic flight at HND or NRT, you need to clear Japanese Customs and pick up your baggage and re-check them in for the Domestic segment at the Domestic Terminals, so you can theoretically throwaway the HND-ITM segment should you wish to only fly to Tokyo.

yes, i just went to do some more research and i think you’re right. so checking a bag wont be an issue then. have updated

Ahhhh! Excellent post! I just wish you had posted this a week ago (+ I wasn’t such a dope considering I have booked a dozen stopover AS redemptions), before I gave up after several months of trying and bought a commercial return for 4k! -.-;;

woah, 4k even when the country is closed? well, think of all the miles you’ll earn 😉

Sadly if you want to fly direct return, this is the price for J these days. No matter which direction. Admittedly, not much higher than usual pre-covid fares, but I hated paying those, too! … and used the wrong card!! 😭🤬 But at least, as you say, a few more NH miles. Both NH and JL currently have some fun domestic JP mileage Trip campaigns on, like JL’s Dokokani Mile which gives you deep discount fares from a mystery draw (between half-self selected locations).

Hi Aaron, would you happen to know what the cancelation policies are for an award ticket booked using Alaska miles for a partner airline like JAL? Pre-covid I vaguely recall you might only lose the non-refundable partner booking fee (which was 25 dollars or 50 dollars?).