The JAL Sakura Lounge is undoubtedly the worst oneworld lounge in all of SFO, with its boring design, lack of amenities, and abysmal F&B selection.

The Sakura Lounge was the only option for my 1.55 p.m flight to Tokyo Narita. The British Airways Lounge doesn’t open till 1.30 p.m, and the Cathay Pacific Lounge is closed until further notice.

Now, SFO is home to some great lounges like the United Polaris Lounge and Virgin Atlantic Clubhouse, places I’d gladly hang out for hours. The Sakura Lounge? You couldn’t pay me to go back.

The Sakura Lounge at SFO is located in International Terminal A, just after security. Turn left after the TSA checkpoint and look for the six video monitors advertising the opening times for the various lounges.

The first hint that you should temper your expectations are the drab, industrial-park corridors leading to the lounge. It feels like a generic office building.

But then again, there are airlines who make the best of it. Cathay Pacific’s lounge, for example, is an attractively-decorated Ilse Crawford-designed space with modern white marble. Japan Airlines? Well, “90s-era condo function room” is probably the best description of its design philosophy.

The JAL Sakura Lounge in SFO is currently open from:

The timings are meant to align with JAL’s SFO flights, and may change according to the schedule. In general, you can expect the lounge to open three hours before departure and close half an hour before.

First Class passengers and oneworld Emerald/Sapphire members may bring one guest with them, departing on the same flight.

The lounge is basically divided into two rooms, where seating density is high with very little space provisioned between chairs and tables. The main area had seating for about 45 guests.

I suppose the least you can say is that this lounge does enjoy abundant natural light and a view of the tarmac. Those interested in plane spotting might want to grab a seat at the communal table running the length of the windows of the main room.

Running along the wall of the annex is another long table divided into sections by tiny frosted glass partitions. Unlike the main room, this table lacks a view except on the extreme left.

While past reports have mentioned there’s a separate seating area for First Class passengers, I wasn’t offered anything during my visit. I spotted a cordoned-off area at the rear of the annex, but doubt it would have made a substantial difference anyway since you get the same F&B as any other guest.

An access code for the Sakura Lounge’s Wi-Fi network is printed on your boarding pass. Speeds clocked in at a respectable 12 Mbps down and 55 Mbps up, so no complaints here. 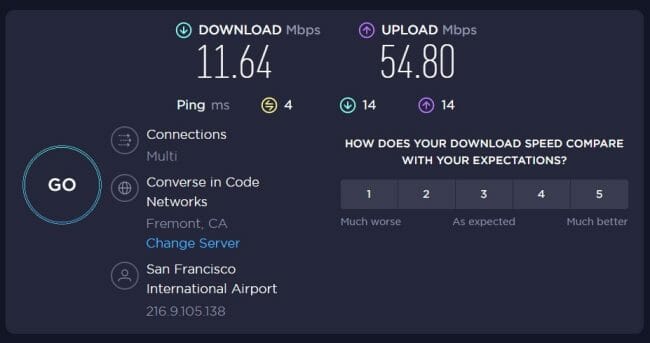 The lounge had an adequate number of power outlets, built into table tops and positioned between chairs. Outlets were not universal, but could accommodate Type A, B and C plugs (basically the plugs you’d use in Japan and the USA). I even spotted a dial-up port, which suggests just how old this lounge is.

Unfortunately, there were no USB ports or wireless charging pads.

The Sakura Lounge has a staff-served buffet area, where two members plate food and pour drinks for guests.

Now, it’s no secret that the Japanese have high standards for food. I mean, that’s why everything tastes so good over there, whether it’s an onigiri at 7-Eleven or an omakase at an upscale sushi-ya.

That’s why the catering quality at the Sakura Lounge was nothing short of abysmal. There were only two hot items available: a mangled-looking ratatouille, and greasy Japanese fried noodles.

There was also a choice of a red (Esser Vineyards) or white wine (Roasted Slope Vineyards), which are probably best described as “table” options, some spirits, and a couple bottles of choya, and a sake. No sparkling wine was available.

I don’t know what else I can say about the catering for this lounge, other than you’ll find better choices in the main terminal.

The Sakura Lounge has its own male and female toilets, each with two stalls. No shower facilities are available.

Bathrooms were only cleaned at the start and end of each lounge opening, so they did get progressively filthy as time went on. Given the lounge’s clientele, I was surprised they didn’t have at least a bidet hose.

There’s no doubt in my mind that the Japan Airlines Sakura Lounge is the worst oneworld lounge in SFO, period. It’s such a disservice to the quality of the product that JAL offers in the air, and there’s no reason to spend any more time here than you have to.

I suspect we may be spoiled by lounges in Asia: the JAL Sakura Lounge looks considerably better than any of the non-Polaris United Clubs at SFO, where you typically get no hot food options (perhaps a soup if you’re lucky) and alcohol is pay per drink. Here’s the food selection last time: https://www.instagram.com/p/BrWdhftH-oL/

right, but if we’re talking about international lounges, then the discussion is very different. i mean, CX’s lounge in SFO is way better than this.

There’s an international United Club at SFO as well (for riffraff like *G’s who can’t get into Polaris) and it’s pretty dire too, although admittedly not quite as bad as the domestic ones.

Even if you pay me – I won’t enter that hell hole you call the United Club. The only thing there to consume are the pretzels and the coke. The toilet / cubicles there give the Greyhound toilets at PABT NY a run for their money. Last time I went, there was a toilet paper trail running across the entire length of the room..

The Sakura Lounge is a step above. Close but no cigar

I totally agree with you. When I visited there last April, a lady who is more like Japanese hot spring hotel waitress greeted me. Japan airlines lounges for domestic in Japan are so poor too. As a Japanese, but as emerald member of CX, I feel shamed of their poor service.

You didn’t miss anything with the closed First Class area. My one pre-pandemic visit revealed… a a small, boxy room with some chairs lining the walls. Other than the added privacy, it was arguably *worse* than the main part of the lounge.