16,894 miles, three cabins, two airlines, and more time zones than I care to count. Bring on the jetlag.

Back in October 2021, I redeemed a one-way Singapore Airlines Business Saver award to San Francisco for travel the following month. I can’t remember why exactly- I think the idea was to review the process for travel to the USA, which had just been added to the VTL scheme.

But I ended up scrapping the trip and replacing it with Australia and South Korea instead, since the procedures for those countries were relatively more complex, and therefore more worth writing about.

Not wanting to pay a US$75 cancellation fee, I kept pushing the travel date out into the future, taking advantage of SIA’s complimentary change policy (since ended). I eventually parked it in September 2022, figuring that would give me more than enough time to plan something.

So naturally I forgot all about it until last week, and the end result is a 17-hour trip to San Francisco.

I’ll be honest. If I had a choice, I probably wouldn’t do this trip at all, because my packed schedule means that now’s not the best time to be overseas. So why not bite the bullet and pay the cancellation fee? Because the miles used for this ticket have already expired.

With only a few weeks of ticket validity left, further date changes were out of the question (not to mention Business Class award space on this route has disappeared for the rest of 2022), and the choice was simple: take the flight, or forfeit the miles.

There wouldn’t be much value in yet another Singapore Airlines A350-900 review, but as luck would have it, while searching for return flights I stumbled upon a glut of Japan Airlines First Class award space from San Francisco to Tokyo. On some days, virtually the entire 8-seat cabin was up for grabs! 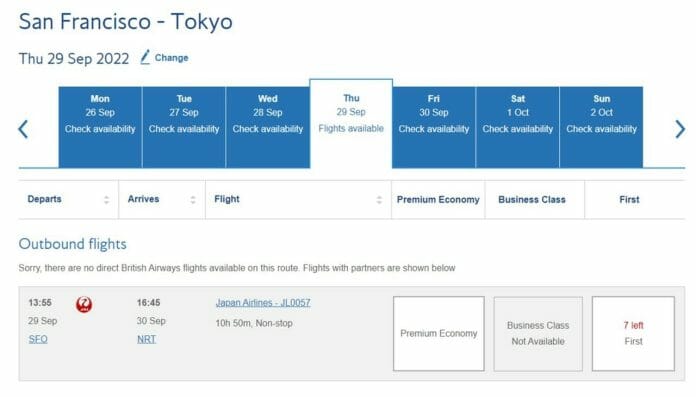 Japan Airlines First Class has been on my bucket list for a long time now, and while it’d be even better if I could fly it out of Tokyo (for the JAL First Class Lounge and Salon champagne, more on that later), I’ll take any opportunity I can get.

But remember that packed schedule I talked about? As much as I’d have liked to spend at least a couple of days in the Bay Area, my timeline was compressed by the fact that I’m attending the Singapore F1 this weekend (thanks to KrisFlyer Experiences).

With my outbound flight on Tuesday and a targeted return date on Friday, the solution was elegantly simple: fly to San Francisco, land at 7 p.m, fly to Tokyo the following day at 2 p.m, and home in Singapore just after midnight.

Total time on the ground: 17 hours.

I’ll be flying Singapore Airlines Business Class from SIN-SFO, for reasons I explained in the previous section. This was booked at the pre-devaluation price of 95,000 KrisFlyer miles + S$75 (it’s since increased to 107,000 KrisFlyer miles).

This 15-hour flight is operated by an A350-900ULR, and since I’ve already reviewed the Business Class experience several times, I won’t be doing a fresh review.

From SFO, I’ll be flying Japan Airlines First Class to NRT. I booked this through Asia Miles, which unfortunately meant having to pay hefty fuel surcharges. The final damage came up to 120,000 Asia Miles + S$570.

Japan Airlines doesn’t have the most modern First Class cabin, but it does have an exquisite wine programme. Passengers can enjoy Louis Roederer Cristal 2014 (to Japan) or Salon 2007 (from Japan), as well as Taittinger Comtes de Champagne 2007 (both directions).

I’m ever so slightly disappointed that I won’t be able to try the Salon, aka the “Shrek bottle” (look at the photo below and you’ll know why), since I’m flying to Japan. For a time, this was the world’s most expensive inflight champagne (which Emirates has since surpassed with Dom Perignon P2).

But hey, I’m hardly going to complain about having to drink Cristal. If nothing else, I’ll finally know what all those rappers were talking about…

At NRT, I’ll be connecting to a Singapore Airlines flight back home. Now, I know that Japan won’t restore its visa-waiver programme until 11 October, but for avoidance of doubt, you can transit airside in Tokyo on separate tickets.

Business Class award space has been completely wiped out on the Singapore – Tokyo route for the rest of the year, and I count myself lucky I was even able to find an Economy Saver award for 27,000 KrisFlyer miles + S$36.

I wasn’t particularly looking forward to a 7-hour redeye flight in Economy, so I was very relieved to receive an upgrade offer to Premium Economy for JPY 16,845 (~S$168).

That’s ridiculously cheap if you ask me, especially considering that a one-way Premium Economy ticket on the same flight was selling for S$1,700+! I jumped on it immediately.

What’s funny is I just realised that in seven years of running this site, I have yet to do a proper review of Singapore Airlines’ Premium Economy. What better time than the present?

For my one night stay in the USA, I’ve chosen the Aloft San Francisco Airport. It’s not even in San Francisco; technically, it’s in Millbrae. There’s just no point staying in San Francisco proper when the sum total of my time on the ground is 17 hours.

I chose the Aloft because it was the cheapest Marriott Bonvoy property in the area. The fact there’s an In-N-Out just a short walk away may or may not have influenced my decision too!

I don’t think there’s anything particularly fascinating about this cookie-cutter hotel, so I’ll probably skip this review.

I’ll be skipping the lounge reviews in Singapore, since I’ve already reviewed all that Singapore Airlines has to offer:

Japan Airlines has its own lounge in San Francisco, but I’ve been reliably informed it’s completely underwhelming. In fact, the prevailing wisdom for oneworld passengers is to visit the British Airways or Cathay Pacific Lounge where possible. Sadly I won’t be able to do either, since the British Airways lounge opens after my flight departs, and all of Cathay Pacific’s outstation lounges are still closed.

In Tokyo, I’ll have access to the ANA Lounge, which I’m on the fence about reviewing since I’ve written about it before. But there could still be some merit in an article, since with Japan’s reopening I’m sure there’ll be those who want to know what to expect lounge-wise.

A 17-hour trip to San Francisco wasn’t quite what I envisioned when I redeemed this flight a year ago, but if nothing else I’ll have a rare opportunity to try Japan Airlines’ First Class product.

Flying 17,000 miles in the space of three days is…not ideal, but there’s little to complain about when 80% of those miles will be in First and Business Class. Still, I think this is the kind of trip I’d be more physically suited to 10 years ago…

Anything else I should be looking out for on this trip?

how about the carbon footprint?

simple. just hold your breath so you don’t give out so much co2.

are you going to use your miles for air tix redemption?

“With my outbound flight on Tuesday and a targeted return date on Friday, the solution was elegantly simple: fly to San Francisco, land at 7 p.m, fly to Tokyo the following day at 2 p.m, and home in Singapore just after midnight.
Total time on the ground: 17 hours.”

Hope you at least get to eat at an In ‘n Out near SFO.

It’s already a mile walk. Have fun. I have done this before, 17 hours to USA and back.

Why not sell the KF experience to those who wanted but couldnt get? Then you can enjoy USA more..

Was in SFO on SQ34/33 recently. SQ34 arrival timing was great, at least on 9 Sep we were the only flight at G gates at that time and cleared immigration in less than 10 mins but another 20 mins for luggage.

Enjoy the trip, even though it’ll be brutal. The Four Points in Millbrae? Yuck. Stay at the Hyatt Regency at SFO! (1) You can sleep until the last minute. Remember that JAL’s departure at 1355 requires a ~1235 check in — doubt you’ll be able to obtain a boarding card online due to necessity to check documents — which is 0335 in the middle of the night Singapore time (2) You have BART to the City right from the hotel: dump your stuff in the room when you arrive (1905 local, 1005 SGT) and go into the City for a… Read more »

I’m assuming you don’t have any check-in luggage on the way back as JL and SQ don’t interline. JL didn’t even interline with MH (even though both are OneWorld partners) when I was using the stopover trick with Mileage Plan miles.

JL and SQ do interline. I checked my bag all the way through no problems.

Do you need to inform the airport counter staff to check your bags all the way through to SGP?

yup, and they did.

Aren’t you a PPS member which means your miles don’t expire?

that rule does not extend to supplementary members, unfortunately.

“Still, I think this is the kind of trip I’d be more physically suited to 10 years ago…”

Wait till you are of my (Federer’s) vintage. You will look upon this trip with nostalgia. It gets progressively worse each year after 32.