Singapore Airlines’ Boeing 747 Slumberettes: So good that other airlines complained

Long before flatbed seats, SIA found a way for its First Class customers to sleep in style. Here's the story of the slumberettes on the B747.

A good night’s sleep is taken for granted in First Class cabins these days, with seats that convert into full-flat beds at the touch of a button. Comfortable bedding, plush sheets and fluffy pillows come standard, and on some airlines, you can even snuggle up with a partner.

But it wasn’t always this way. In fact, the story of how sleeper seats made it onto Singapore Airlines is a fascinating one, featuring sky high slumber parties and some very unhappy Brits.

In 1975, Singapore Airlines announced a S$670,000 plan (S$1.6M in today’s money) to outfit all its B747-200s with “berthable divans”, which someone in the marketing team had the good sense to redub “slumberettes”. These came factory-equipped on its 5th jumbo jet from Seattle; the other four were retrofitted shortly after.

Unlike today’s convertible First Class seats, the slumberettes were a separate amenity altogether.  Measuring seven feet long and four feet wide, these were located on the upper deck of the 747 in what was called the “Raffles Lounge”.

There were a total of six slumberettes:

Each slumberette had a sleeping belt for safety, and was upholstered in fine leather. Bedsheets, pillows and blankets were provided, as were individual reading lights, call buttons, inflight music sockets- features considered revolutionary for their time, made possible through the installation of multiplex wiring.

The ads called it the “biggest yawn in aviation history”, back in the days when Singapore Airlines’ marketing adopted a more tongue-in-cheek approach, instead of today’s stiff upper lip.

Singapore Airlines, of course, was not the first-ever airline to offer sleeping facilities for passengers. Back in the 1940s, Pan American Boeing 314 Clippers already had bunk beds for overnight accommodation (a good thing, since it flew 3X slower than a modern Boeing 777).

However, with the advent of modern jets and commoditization of air travel, beds had become a rarer and rarer sight. Singapore Airlines could at least lay claim to be the first carrier to install sleeping facilities on a jumbo jet, and what’s more, passengers could reserve them completely free-of-charge. When competitors eventually introduced similar innovations, the common practice was to impose a fee.

Passengers were happy, the press was abuzz, and all was well.

So naturally, that’s when the problems started.

The Empire Strikes Back

In December 1976, the Straits Times reported that Singapore Airlines had been ordered to cease marketing its slumberettes by the UK Department of Trade, citing complaints from “some airlines” that this constituted “unfair competition” to British Airways.

Passengers who wanted to use the slumberettes could still do so, but Singapore Airlines couldn’t take advance reservations (essential, given how there were six slumberettes for 30 First Class passengers) nor advertise the service.

I need to quote this section in its totality, because on first glance it reads like something from The Onion:

But the complaint was very real. Singapore Airlines had to argue that the slumberettes “represent a minimal benefit and do not represent a major competitive innovation”- god forbid that ever happen!

The official story for the genesis of the row was that Qantas had applied for permission to serve free drinks to Economy Class passengers and was denied. Following this, the Department of Trade conducted a review of all services out of Britain, in the process discovering that Singapore Airlines, Malaysian Airlines, Thai International, Air Ceylon and a handful of Middle Eastern carriers were offering services “considered to resent unfair competition.” In that sense, Singapore Airlines was more collateral damage than a target per se, sort of like “we don’t dislike you, we just dislike all good service”.

In fact, it wasn’t just First Class that the Department of Trade took issue with. Singapore Airlines was also forced to discontinue free drinks and inflight entertainment for Economy Class passengers in October 1977, with the imposition of a nominal charge (30 cents for beer, 60 cents for whiskey, $1.20 for champagne and $6 for earphones) on legs that connected to London.

It sounds absurd to the modern ear, but perhaps the complaint wasn’t as frivolous as it sounds. For context, Singapore Airlines was not an IATA member at the time, but British Airways was. IATA’s code of onboard service prohibited the serving of free alcoholic drinks and cigarettes (yes, SIA served free cigarettes once upon a time), complimentary earphones for inflight movies or other freebies. British Airways was bound to these rules; Singapore Airlines was not.

IATA’s reputation may have been rehabilitated today, but back then they really came across as the enemy of consumers, a bunch of apparatchiks whose sole responsibility was to look out for the bottom line of their members. They opposed airfare discounting, they set fixed prices for inflight entertainment and drinks, they regarded all non-IATA members as government subsidized, disreputable operations only interested in price undercutting.

No wonder SIA’s managing director could take the moral high ground in defiantly saying “we won’t join IATA” (they later did in the 1990s, after a host of reforms).

But regardless of the true reasons, the optics were terrible and the court of public opinion was always going to be on SIA’s side. The British public weren’t amused by their government’s antics either, as evidenced in this letter to the editor in the Times of London:

One wonders on whose authority the Department of Trade suddenly decided to curtail the attractions offered by Singapore and why. Could it have been: “If Britain cannot run a profitable international airline with lots of happy passengers, we’ll jolly well ensure that no one else can?’

I don’t know how this matter was eventually settled. The only further reference I can find is a satirical article in New Nation from August 1976, referencing a $4,800 fine imposed by the British authorities. That’s ~$11,600 in today’s money; pretty much a slap on the wrist.

In any case, the problem eventually resolved itself in 1983, when Singapore Airlines phased out slumberettes in favor of sleeper seats. The slumberettes, ironically, ended up creating more dissatisfaction among passengers who couldn’t secure one, and the goal now was to give every First Class customer a bed.

These became the blueprint for future First Class seats, culminating in the launch of the legendary Sky Suite in 1998. While I never had a chance to try this product, I’ve heard so many stories about what a phenomenal seat it turned out to be. 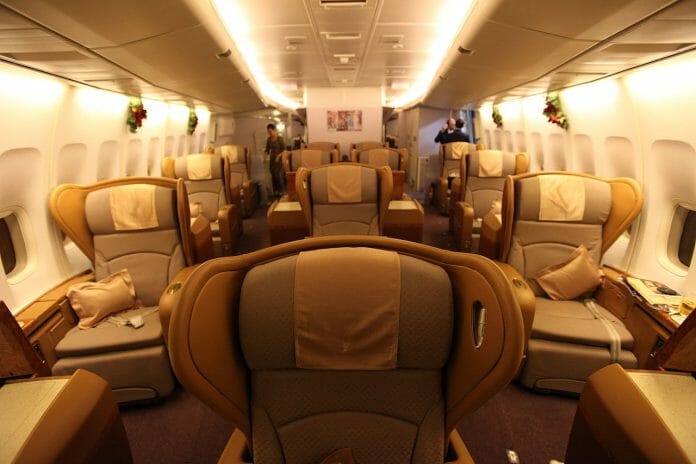 Funnily enough, there’s a certain circularity to the slumberette tale, because that wasn’t the last pillow fight between Singapore Airlines and the Brits. No sooner had the Sky Suite launched than British Airways raised hell, claiming that the product violated its patents. 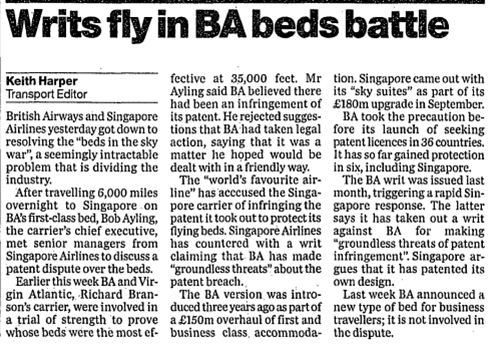 I suppose you could say both parties were at their writ’s end.

While the slumberettes may not have been the first airborne sleeping facilities, they certainly paved the way for them to become commonplace in premium cabins. Today, flatbed seats are almost standard issue across First Class and Business Class cabins worldwide. Perhaps they’ll even diffuse to Premium Economy one day- hard to see, but never say never!

Did you ever fly on a Singapore Airlines slumberette? What was the experience like?

Aaron Wong
Aaron founded The Milelion to help people travel better for less and impress chiobu. He was 50% successful.
Previous article
The MileLion’s 2022 Christmas Wishlist
Next article
How will the GST hike affect the miles game?

I had to fly business class to London in a British Airways flight on 747. It was really bad.

Turkish Airlines had lie flat seat on its Comfort Class but the entire comfort class product was phased out several years ago.

Though it was great and perhaps the most comfortable Premium Eco in the sky by a mile, nope the TK Comfort Class did not lie flat. Based on the Recaro CL4420 it had 8.8″ of recline which is greater than MI/SQ 738 J seats.

Doubt any of your readers would have tried the Slumberette. But having flown the Sky Suites several times in the early 2000s I can confirm this was a really enjoyable experience and would gladly still fly it today. That’s how ahead of the game this product was.

Also the lack of engine noise at the nose of a 747 cannot be beat, ever

I flew the Singapore Airlines slumberette from Singapore to London.
Thanks to the gracious good humour of Mr Lim Chin Beng.
I had, in jest, suggested I “sleep-test” it.
The exemplary Mr Lim had his PR people buy me lunch, to say, “go ahead!”
I try to fly SQ as & when i can, since 1972.
It is still a great way to fly.

Hi Sylvia! I came across a few of your columns while digging through the NLB archives. On the off chance you have any photos of your slumberette adventure, would be glad to feature them.

i believe so! another story for another time

From what’s been happening all these time, even until now. As long as Asian countries do something better than them, ang mo countries sure complain.

The colossal lie of laissez-faire.

This is fantastic, Aaron!

I recall a story from when I was a kid. One of my father’s business associates recalled being in the Raffles Lounge and being told to be quiet as Dolly Parton was asleep in the (private) Slumberette you referred to. I never quite understood the logistics of how that may have looked until your article, so well done.

Interestingly enough, he remained a lifelong devotee of SQ!

that IS quite a story indeed. i don’t suppose he’d have any photos, would he (dolly probably flies private now)

I, having genuinely learnt something new today, applaud your avgeek research. Well done!

Guess some things don’t ever change. BA is still a terrible airline..

Nice story Aaron. I was with SQ from the late 90s and flew in the Sky Suites often. Agree with other commentators that these were probably the best seats, at least until the A380 Suites came along. I’d certainly rather be in Sky Suites than the current J seats….