Credit card admin fees for miles transfers are pretty much the industry norm now – for those of you currently chalking up 4mpd on the OCBC Titanium Rewards card, for instance, you’ll probably one day find yourself looking at the redemption screen and groaning at the dreaded ‘+$25.00’.

Interestingly enough, corresponding redemptions for the Voyage Card no longer seem to include the $25 admin fee! (addendum: OCBC bills them as ‘waived’, which probably means they’re reserving the right to restore the fee when they one day feel like it.)

With this change, I now see the OCBC Voyage as a pretty flexible source of buffer miles to supplement my 4 mpd earn from other sources. Since there’s no admin charge incurred for transferring Voyage Miles, you’re free to move them in smaller quantities if desired (including that little 8,000 mile block, which can allow you to transfer smaller amounts closer to what you actually need).

(Update: It’s been highlighted in the comments, and confirmed by HWZ CSO, that miles earned by paying additional annual fees would be transferred to KrisFlyer automatically, with no option to retain them as Voyage Miles.)

I’d transferred VMs as recently as Oct 2017 and was charged $25 then, so I’m pretty sure this is a recent development – possibly in tandem with the 2018 rate revision, which put it on par with the other general spend cards. 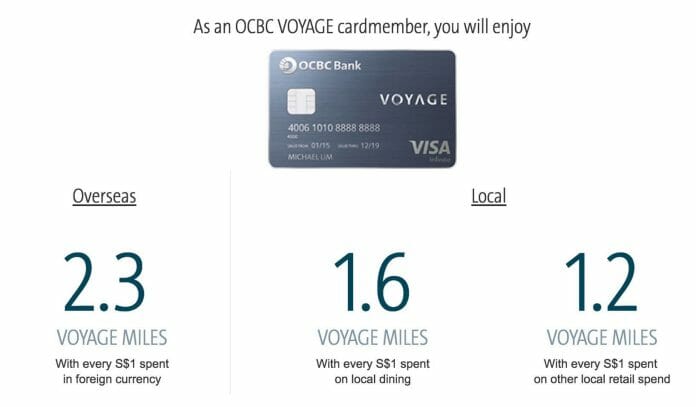 In related news – as it turns out, the elite versions of the card (carried by OCBC Premier, OCBC Premier Private Client or Bank of Singapore customers) now receive 1.6mpd for local general spend. On the card’s official website, you can actually click on a dropdown arrow to reveal the enhanced earning rates. 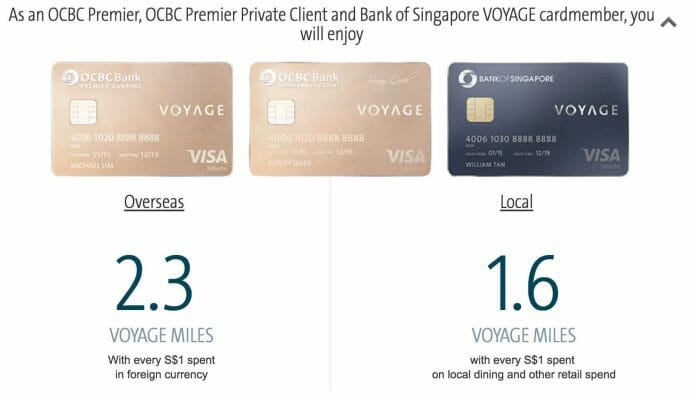 The 1.6mpd earn rate beats a previous top contender, the UOB PRVI (1.4mpd), although it loses narrowly for overseas spend (2.4mpd – addendum: though as Tiger9119 has commented, the lower FCY fees for OCBC Voyage almost certainly more than makes up for it). Plus, none of that rounding-down-to-$5 nonsense, which makes it useful even for small transactions (although it might still be affected by exclusions for transactions to government institutions). Overall, that makes it a really viable card for general spend.

While I can’t recommend that you lock up funds just for a good miles card (OCBC Premier status, already the lowest of the lot, requires $200,000 worth of assets under management), it is worthwhile looking into getting the card if you already possess elite OCBC status. 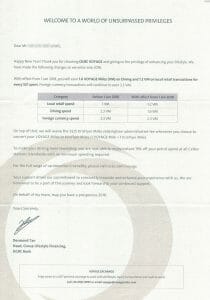 The third point’s the only new point of data here, but if you pump at Caltex that’s probably going to make this card even more attractive (although I personally think the OCBC Titanium Rewards via mobile payment with 4mpd, coupled with 14-16% discount for OCBC cards, is the superior choice).

Louis Tan
Louis believes he caught the premium travel bug after attaining KrisFlyer Elite Gold and occasionally being upgraded while shuttling between the UK, Singapore and Japan (in economy class). These travels have led to a wonderful marriage, as well as a burning desire to avoid flying long-haul economy. He previously travelled with a gryphon plush toy, Griffles, which often stood in for him in vacation photos. Griffles is mostly busy with entertaining a toddler these days, but still manages to continues amusing (and confusing) air stewardesses, hotel staff (and just about everybody else) all around the world.
Previous articleCathay Pacific Asia Miles “More Miles For You” points conversion promotion launches
Next articleReview: Singapore Airlines SilverKris Lounge Terminal 3 Changi Airport

Received the mailer about this revision and somewhat disappointed with the drastic reduction from 2.3 to 1. 6 for local dining. Darn. 🙁

Me too. Got the card to use for dining, which is my main expense. But with this change… 🙁

Only if you’re a ‘premier’ customer. Which I presume many of us general consumers won’t be. Oh well.

I’ve gotta say I was tempted – but unless OCBC closes two eyes about minimum AUM to retain Premier (and also drop below fee) I don’t think it’s all that feasible for many of us (even if doable, opportunity cost too high). =(

My personal experience is that they have been quite lax. My main transaction with them is the 70k in the 360 account to max out the interest earned.

true. and also need to consider that 1 VM is worth slightly more than 1 Krisflyer mile (call option to convert)

Good point. Have added to the main post. Thanks for highlighting!

And recently there was a promo of 3mpd for overseas transactions.

Does anyone know if CardUp payments would qualify as “other local retail spend”?

Maybe you should call them to check.

from OCBC:
1.3.20 Payment of funds to prepaid accounts and merchants who are categorised as “payment
service providers”. OCBC Bank has the absolute discretion to determine which provider is
considered a “payment service provider”.

I believe the miles from paying the annual fees are credited to Krisflyer immediately, not stored on the card

Nope, can confirm that they’re credited as VM on the card.

I just filled up the application form yesterday. David might be right. If you opt for the 150k miles or 500k miles offer, the wording seems to suggest it will be credited immediately. Otherwise would have opted paying $3210 for 150k VM if it can redeem a return business to Europe.

Oh hmm. I stand corrected – for me, it was deposited as VM back in Jun 2017. I find it weird that they’d choose to deposit as KF instead of VM though (the latter gives them flexibility to devalue and would thus be more beneficial to the bank).

Did you have to provide your KF number during application? Previously, you had to register your KF number separately (I only did it a few months down the road) so if you now provide it upon sign up that supports the theory.

Checked with the CSOs on HWZ and they’ve confirmed that T&C dictates that bonus paid VM need to be transferred to KF immediately, which is a really weird requirement (to me).

In practice, for me my first year bonus miles were credited as VM. Maybe it’s simply because they did not have my KF number at time of registration and so couldn’t transfer immediately – if anyone else has personal experience with this, do share!

When I signed up for the card last October, VM was credited to my account, and I just received a call from OCBC telling me that they will transfer my VM to Krisflyer!

Mine’s from last June… man I hope they’re not going down a hit list!

It mentioned Miles not VOYAGE Miles for option 2 and 3.

What happens if the transaction done locally is neither retail nor dining? eg. Payment at local hospital or hotel.
Will it still earn 1.6MPD?

This line in the T&Cs is also weird…
1.1.4 Overseas Retail and Dining Spend :
… For the avoidance of doubt, any overseas retail and dining spend
charged to the Card in Singapore dollars will earn VOYAGE Miles at a rate of S$1: 1 VOYAGE Mile;

Shouldn’t it fall back to 1.6MPD if the overseas retail spend is charged in SGD?

Retail spend in card T&C generally refers to any real spend (as opposed to card fees etc.) so yes, should still earning 1.2/1.6mpd, depending on tier.

As for the T&C I’m positive that the 1mpd rate given is based on last year’s earn rate. Clearly their card team is not as eagle-eyed as you are. ? (but maybe OCBC is really that evil. I’ll try checking with HWZ CSOs.)

Checked with the CSOs on HWZ and they’ve confirmed that SGD charges overseas will indeed earn at 1:1 ratio, lower than the local general rate of 1.2/1.6.

IMO this is a really scumbag move for them to make – now you’ve got to be doubly careful not to use activate DCC on it, and also when a website’s/app’s payment processor is based overseas…

I’d left the CSO some feedback regarding how stingy I thought the 1:1 rate was; not sure that’s what caused the change, but I’m okay taking some credit for this update anyway. 😉

(or maybe it was a typo after all.)

A typo that we (the people) pointed out to them.

Not forgetting there is an 19% instant discount on petrol at caltex, with no minimum spend.

Thanks for highlighting! Have added to the main post.

Hard to spend that much for me… Haha! Unless one day all childcare and tuition centres accept CC.

Getting miles for telco payment is quite the norm for general spend cards, right? If you really want to optimise, aren’t there 4mpd options (e.g. Citi Rewards, DBS WWMC)?

Think majority of ppl would have trouble hitting 60k on general spend… especially if they have other cards they’re earning 4mpd on. Hope they’re able to give manual waivers too (though I’m not too hopeful).

Thanks for elaborating. In case it wasn’t clear previously, I totally agreed with your earlier comment. =)

Sorry for being so lengthy.

Not at all. This is great! I wouldn’t have the head to work out these sums.

I’m lost (math noob here lol), but curious. May I know how is it that the difference for USD 100 spend is so much higher at 8.5cts per mile, while in a scenario of USD 101 spend it could be brought down to just 4.4 cts per mile? Am i conceptually missing something? Thanks.

The actual differences quoted are actually rather small, but you can see how it can add up over time!

because of UOB rounding down policy. For spending of SGD139.38 , you only get miles for SGD135.

I have a feeling that OCBC voyage miles will be devalued soon . I think it is cheaper for OCBC to transfer VM to krisflyer miles.

On the contrary, because VM aren’t going to be devalued, the bank wants you to transfer to KF? VM technically allows one to redeem a revenue ticket with any airline. I would have considered the 150k miles offer if that would allow me to redeem a business class ticket to Europe. HWZ seems to have conflicting reports of how much 1 VM is worth. Oddly enough like Aaron’s previous article, it’s worth more redeeming econ class tickets haha!

take note, for the premier private voyage card, it is 2.3 V.M per $1 SGD spent on all food (local)

Thanks. Is this confirmed? I’d seen screenshots of an email advertising this, but the website still lists the 1.6mpd figure as captured in the post.

Had heard that the email was in error, but I don’t have personal experience in this respect. Are you able to confirm that it’s 2.3mpd earned?

is this a recent change? as per the website premier voyage card is 1.6 vm for dining (and all local transactions)