Has Singapore Airlines increased fares with the new pricing structure?

Today is the day that Singapore Airlines implements their new fare structure across all cabins. You can read more about the changes that SQ has made in this article. Stressed out over Linear Algebra, I decided to take a quick look to see if anything else has changed over at the website (besides the fare rules).

Along with the changes in fare rules, Singapore Airlines outed a new user interface in their booking engine. Compared to the previous search interface, this is a whole lot better. Using the example of a booking from Singapore to London, you’ll be able see the 3 new economy fare structures available for booking along with the fare rules clearly laid out. 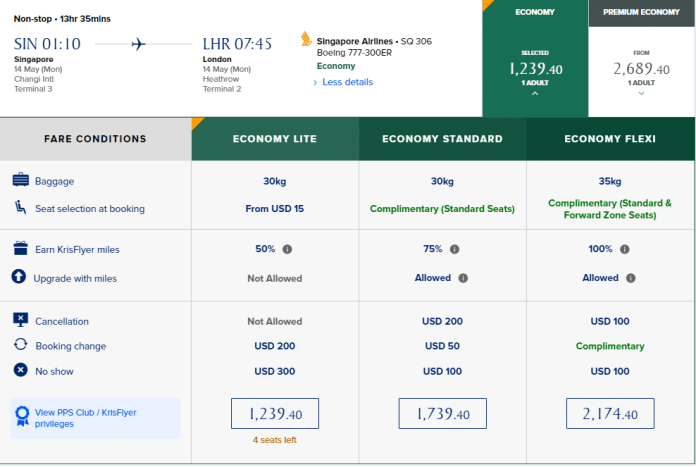 Previously, you would have to select both flight segments to view your total fare, as fares may go up or down depending on the flight chosen. As of today, SQ has updated it such that it is more transparent  to view how much you would be paying in total with the flight pairing of your choice. 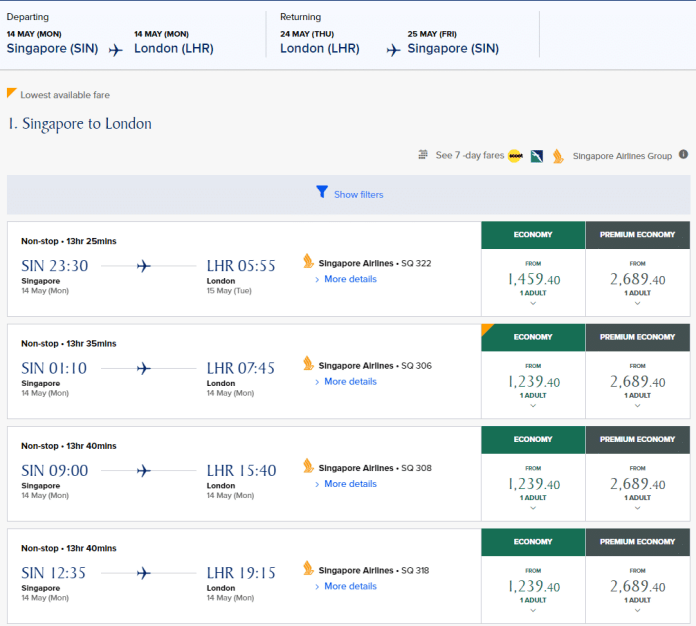 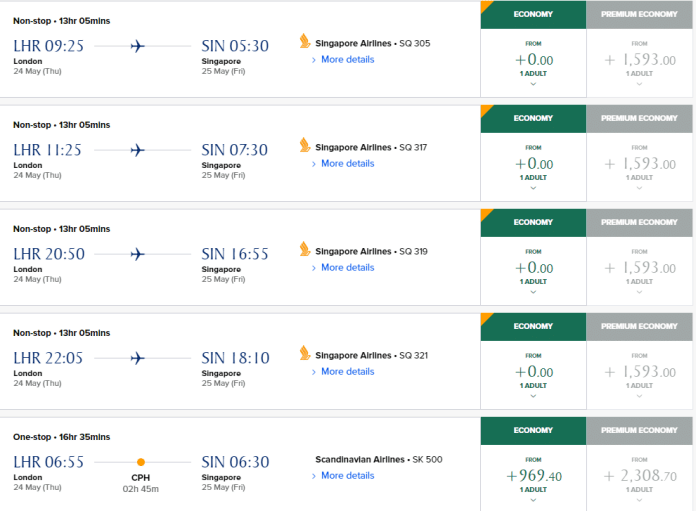 Detailed information of what fares will give you

When you select your fare (i.e Economy Lite), you’ll also be given a breakdown of what you’ll be receiving when purchasing an Economy Lite fare. In addition, the engine will ask if you want to upgrade to the next fare class which in this case is Economy Standard. 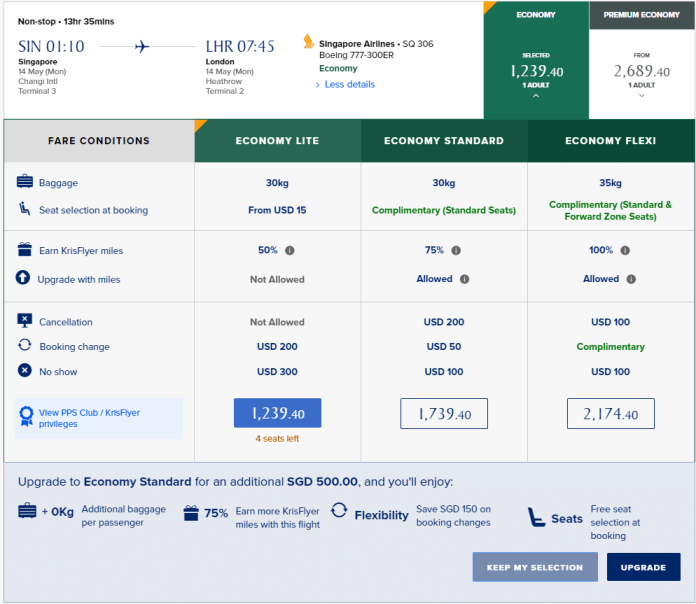 After you have chosen your flight combinations, you’ll see a very large box detailing to you again what are the things you’ll have to pay for with the fare you have selected at the bottom of the page. 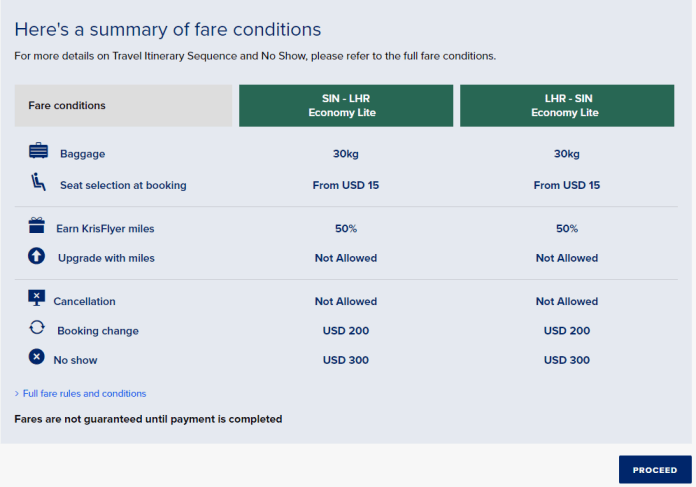 Fares very close to what was offered previously

Again, using London as an example (cause I’ve been flight hunting for flights to London in Economy), fares have largely remained unchanged at the lowest end.

This is what I was quoted back in December when I was searching for flights in May on an Economy Super Saver fare :

A check today on an Economy Lite fare for the exact same flights and dates reveals that there is a price increase of S$4, not that crazy of a price jump and probably more attributable to exchange rate fluctuations than anything else (eg for the APD and other taxes payable on the UK side).

If you include seat assignments both ways, the price will go up by around SGD40 in total (as a one way seat reservation costs around USD 15 =~ SGD 20). So effectively, the new fare costs around S$1,280 factoring in the cost of seat selection. Still not that bad considering you’ll be earning 50% of the miles flown compared to 10% previously.

Currently, there is a bug preventing you from choosing your seats so you’ll probably only be able to book your seats after paying for the ticket (Milelion edit: seat selection via all booking channels is currently unavailable until 4pm GMT on 20 Jan, as per this circular)

So far, fares at Economy Lite are very close to what SQ was offering previously on Economy Super Saver (their previous lowest fare bucket). Although you might argue that you’ll be slapped with a charge for seat reservation and that’s a negative change as it raises the overall fare, keep in mind that you’ll be earning even more miles than before and would probably gain back the money spent on seat reservation from the miles earned.

Previously on the Economy Super Saver fare, you’ll only earn 10% of the miles flown, thus a return journey from Singapore to London would net you a paltry 1,354 KrisFlyer miles. On Economy Lite however, you’ll now be earning 6,762 miles on a return trip. That’s an additional 5,408 miles. At a valuation of 2 cents per mile, you’ll be getting back approximately S$108 from the additional miles earned which is sufficient to offset the cost of seat selection. 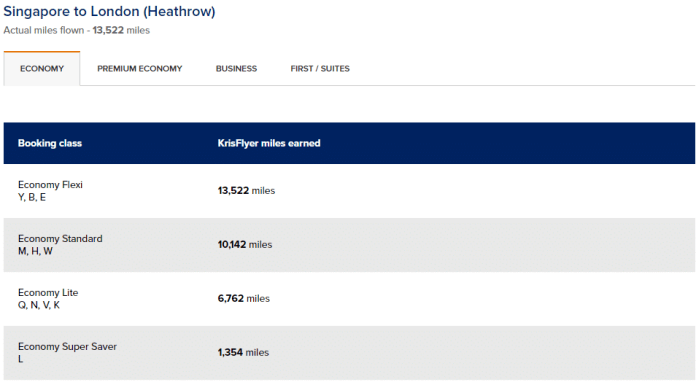 Of course the above analysis is only for a single route and it’s probably best to wait for more additional data points to see if overall fares have indeed remained the same. However, initial signs appear promising. Let’s see how this goes.

If you’ve been comparing fares before and after, did you see any big changes?

Matthew Chong
Addicted to luxury travel while trying not to go broke, Matthew is always on the prowl for the best deals in the travel industry. When he's not busy studying, he can be found trawling the internet and reading up on credit cards, airlines and hotels. He also wouldn't mind taking you out on a date.
Previous article
Review: Egyptair B737 Business Class Amman to Cairo to Nairobi
Next article
Hilton Honors Gold fast track offer for Visa Infinite (and Signature) cardholders extended

While this appears to be overall positive for economy lite fares, it is exactly the opposite for everything else. In the case of Premium Economy, the PE lite fares are the same as the previous PE fares but no upgrades alowed. PE Flexi which allows upgrades is about $500 more (SIN-Australia). For the economy standard, the price is similar to flex-saver but you earn 25% less miles and elite miles, and finally the business lite fares. The price is exactly the same as the old business savers (I’ve looked at Sin-Australia) but you have to pay $200usd for changes and… Read more »

If you’re lucky or unlucky, you might get a free stopover at Alice Spring.

And people seem to have forgotten the recent AirAsia fiasco as well. What I do not like is the lack of transparency in their media statements. Always technical error but safety not compromised…. seriously.

Also kudos to Matthew for a timely and useful post. The linear algebra can wait!

I bought a ticket last night. And comparing it with fares this morning, it’s exactly the same, down to the cent. As I got an N Q class ticket, I had to purchase it yesterday to avoid the seat fees. My change fee was also USD100 cheaper than what it is now. However, I noticed that KV fares are now also changeable, at 200 USD a pop. KV fares have actually become more attractive if you’re not fussy about seats. Although, I understand that the pain is mostly for the more expensive Y and PEY fares. KV fare hunters are… Read more »

Agreed on the low-end fare hunters. If they’re gonna be after price then many of them should be happier with Scoot flights to Europe or US airlines to North America. Oh the horror!

Am I the only one who noticed the glaring error at the prompt to upgrade to the next fare class from lite to standard? Flexibility: save SGD150 on booking changes <— shouldn't this be USD150?