[Update: Yes, it is. Automatically included travel insurance is now appearing on my dummy bookings. Going to publish some thoughts about this soon]

In today’s Straits Times it was reported that Singapore Airlines is automatically including travel insurance for flights departing from Singapore, Thailand and Hong Kong. An SIA spokesperson confirmed as much, saying “The “opt-in” default was implemented in some markets, including Singapore, last year”

The strange thing is- despite the spokesperson all but confirming the policy, I can’t personally replicate it when trying to book a flight.

Here’s what I see when I try to book a ticket. I’ve tried this for all fare buckets in economy and business class, and the result is the same: 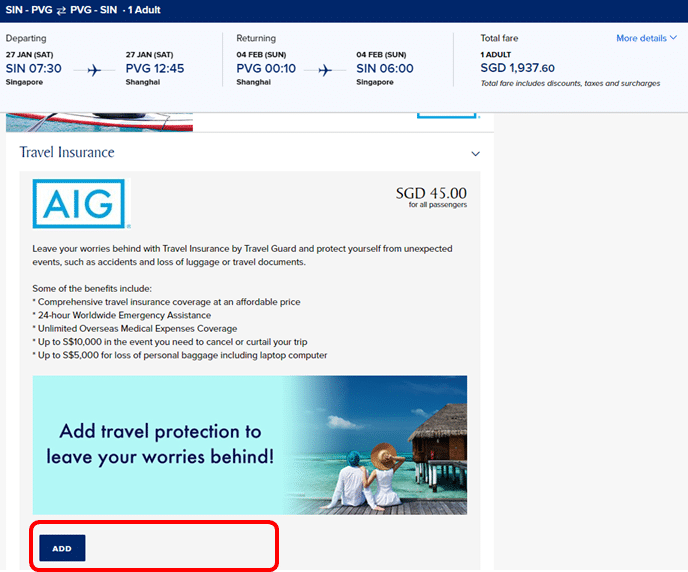 You can see that travel insurance still appears as an opt-in, and indeed on the final screen the price was that reflected during initial booking screens.

So two possibilities- (1) SQ has quietly backed down on this and reverted travel insurance to an opt-in process (2) Opt-out is still the norm, but the system is still glitchy after last night’s seat selection and add-ons overhaul, so it’s not reflecting yet.

It’s confusing because you’d think if (1) happened then SQ’s spokesperson would have strongly refuted the forum letter. The way he responded leads me to believe it’s more of (2).

If it is indeed (2), I have some very choice things to say about this, but I’m going to hold off publishing them until it can be shown that opt-out is indeed the default for all flight bookings now. So if you notice opt-out becoming the default for your bookings, do drop me a note.

My advice in the meantime would be to exercise caution when making your SQ bookings- be sure that you don’t get suckered into buying something you may not need/already have.

After this piece of news broke out yesterday, I quickly pulled up 2 SQ bookings I paid for last month (Dec 2017) as I have a penchant for not reading fine prints (or my bills for that matter) before I pay up. Thankfully, I did not get charged for insurance!

When I booked my flights on 29 Dec 2017, I had to click remove as the AIG insurance was added by default. Strange that I had a different experience despite making the booking in the same month.

That’s weird! Maybe what Aaron said about some webpage bugs is true.

i now see travel insurance auto included when i use chrome incognito mode. here we go…

i dislike this idea that we have to be constantly on our toes now.

Think it’s (1). Booked a flight on wed night and the insurance was default included. I suspect the interview of their spokesperson was a few days back before they published the article today.

[…] them. Historically some airlines automatically include such add-ons in your tickets (For example Singapore Airlines’s infamous auto insurance inclusion) unless you click on an option to opt out. Such practice will no longer be allowed under the new […]