A review of Ethiopian Airlines' B787 Dreamliner Business Class.

If you recall last year’s RTW trip report, you’ll remember that I’d reviewed ET’s B787 Dreamliner product before. Why review it again? Because ET has two types of Dreamliners. As per this FT thread, of the 19 787-8s that Ethiopian operates, some aircraft have angled flat seats and others the full flat B/E Aerospace Diamond ones.

Unfortunately, this time round I got an aircraft with the angled flat seats. I’m really puzzled as to why Ethiopian would chose to operate an aircraft with the inferior version of their business class product on a long haul route, but then again I’ve never pretended to understand the intricacies behind route planning.

It’s funny because the seats don’t, on first glance, look like angled flat seats. In fact, they look very similar to the seats on Air India’s Dreamliners, which other reviewers claim go full flat. So I’m confused here. I felt pretty certain my seat wasn’t full flat for what it’s worth. Maybe I’ll bring my spirit level next time round.

2-2-2 is no one’s favourite business class configuration, but as I mentioned in my previous post this is pretty much the best you’ll get when flying out of Africa. Yes, if you’re lucky you might get one of SAA’s new A330s, but those are the exception rather than the rule .

There’s a good amount of legroom for each seat, but you’re still going to have to hop over your prone neighbour to access the aisle if you’re on the window side.

Seat controls are in the centre divider- I guess I should have known something was up when I saw the “flat bed” button didn’t show the bed at parallel to the ground. At least they’re honest!

The IFE remote is decidedly last gen, and even has a joystick on the reverse side. Many airlines have opted to go for flat D-pads because the protruding nature of a joystick means it’s vulnerable to breaking. I can’t remember the last time I played a game on a plane. Probably back in the good old days of Super Mario World on SQ’s old aircraft. I do wonder why, with all the processing power we now have, IFE systems can’t have PS4 quality games. It’s worth thinking about. 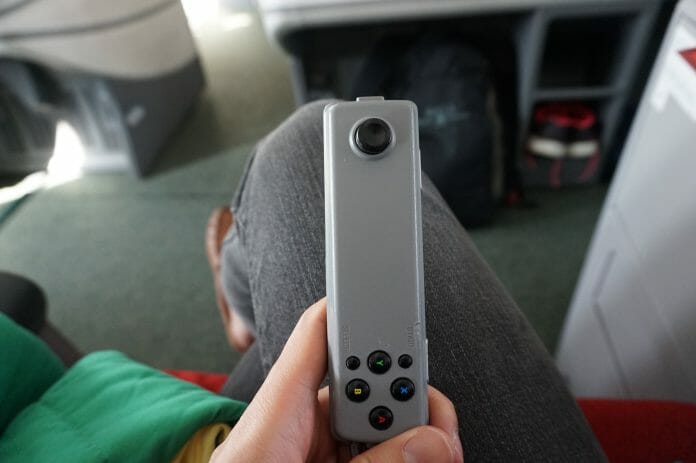 Accompanying the controller was a pair of regular headphones. No noise cancelling doodads here.

The tray table is large and solid.

I received an Ethiopian Airlines amenities kit the last time I flew long haul with them and the only thing that’s changed since then is the color. This version came in a lime green, but the contents were exactly the same (eye shades, lip balm, toothbrush kit, earplugs, comb, socks, pen and toothpick).

Also waiting at the seat was a large, plastic-wrapped blanket with a clear “don’t steal me message”. At least it wasn’t scratchy.

Rounding off the seat is the large IFE screen infront of you, plus a storage nook for water bottles and headphones.

Before take off, the crew pre-emptively distributed bottles of water to every passenger. They also broke out the bubbly, the same Lallier that was available on the intra Africa route.

The captain came on the PA to welcome us on board and inform us of the very long 11h 40 minute flight time to Sao Paulo. On hearing this, my seatmate groaned aloud. Settle down lady, it’s much worse at the back of the bus…

Lunch was served shortly after takeoff, with the following options-

I’m going to go on the record and say that Ethiopian has no idea how to plate stuff. Each of the items served looked as unappetizing as can be, and the taste wasn’t much better.

The appetizer was some tuna that looked really lonely on the plate and a salad with no dressing. I imagine if you combined the salad with the tuna the dish would look better, but as it was the whole thing looked really sad.

The main was equally unattractive looking. The fish was nuked to death and the greens were mushy.

The less said about dessert the better.

I checked out the bathrooms after the meal (people keep complaining that my trip report sequences are all the same, to which I say- it’s probably a better idea to step into the airline bathroom after your meal than before). I don’t think Ethiopian really splurged on any of the options for the Dreamliner- no auto flushing loo (either that or the sensor wasn’t working), no auto opening bin either.

Ethiopian’s IFE selection isn’t the biggest out there, but it at least provided some distraction during the long flight. 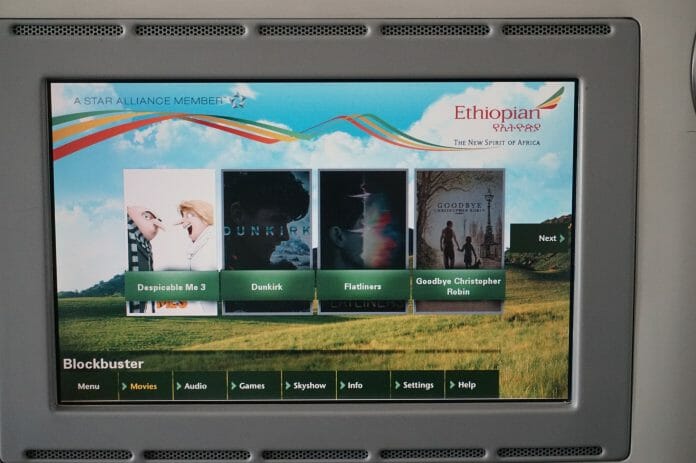 Ethiopian Airlines B787 Business Class IFE SelectionI was so tired after getting up at 3 a.m that the angled flat (?) bed didn’t bother me that much. The footrest didn’t extend all that far, but I napped for a few hours.

After napping for a few hours I woke up and got some work done. Ethiopian doesn’t have Wi-Fi on its planes, sadly, so I actually had to be productive. While working, the crew came by to take orders for a hot mid-flight meal:

The non-veg choice was actually decent. Again, no prizes for plating, but taste wise this was light years ahead of the first meal.

After this, it was more trying to work, more fitful napping and more staring at the airshow willing the hours to pass more quickly.

If it’s any consolation, the chicken was actually really tender, almost to the point where I started worrying it might be undercooked.

The dessert cart came around and I had a brownie. I ate two bites and gave up- it’s safe to say that desserts aren’t the strong suit of ground services in ADD.

We ended up landing in GRU about 40 minutes ahead of schedule, more a function of the airline overblocking flying time than any particularly strong winds or anything. This was a really long flight, but as I’ve said before once you’re in business class you lose all right to complain too much. Think of the poor souls behind.

Although the flight was passable, as far as possible I’d still aim to fly with a Europe/Asia-based *A partner in and out of Africa. You won’t be miserable if you fly with ET, but don’t go away raving either.

Aaron Wong
Aaron founded The Milelion to help people travel better for less and impress chiobu. He was 50% successful.
Previous articleShould you use a miles card for petrol spend?
Next articleEarn Double Qantas Points on all Australian Hotel Bookings

No offense, but why didn’t you try the Ethiopian dishes instead. They are reportedly good http://liveandletsfly.boardingarea.com/2017/12/11/ethiopian-airlines-new-787-business-class-review/
Yet knowing from the last experience that the standard catering was not good you went ahead to choose the standard stuff and still came out disappointed.

Even the ang moh was brave enough to try it, we Asians are definitely better than that.

haha none taken. i will freely admit that i’m the least adventurous person i know of. that said my colleague tried the Ethiopian food and wasn’t blown away either. fwiw

I was reading this belatedly as I am in early stages of planning a vacation in a place easiest reached via ET from SIN. I’ll add to the chorus that Ethiopian cuisine is one of the better ones out there. But more interesting than the food is the plating: lots of yummy stews on injera (flat fermented bread) served on a communal plate. Everyone eats out of the plate with fingers….and you’re expected to feed each other! Ethiopian restaurants are some of the best date ideas – indeed one of the earliest meals my now wife and I had was… Read more »

[…] operates its B787 aircraft between ADD and GRU (and then onwards to EZE). These are very new aircraft, although unfortunately Ethiopian has put […]